For now, let me take you back two months to our time in New Mexico where Steve continued his recovery.  After a post-treatment follow-up with his oncologist, we were OK’d to finally get out of overheated Tucson.  Steve wasn’t yet in top shape to drive Betsy, but we just had to move on. The city life with blaring sirens, traffic, train horns, dust, and impossible heat was getting old.  We had to hit the road!

This post is a clipped version of the many fun things we did while in New Mexico:

Our escape to southwest New Mexico began at Silver City.  Sitting at a cool 6142′ of elevation, it was perfect for a month of healing.  Rose Valley RV Ranch was highly recommended by most of our RV friends who had stayed there.  What a difference a change in elevation, scenery, temperature, and state made.  To top it off, our next door neighbors were super quiet since they were all six feet below ground at Pioneer Cemetery, on Old Silver City Cemetery’s “Memory Lane!”

Steve had a complication resulting from his radiation treatments.  The good doctor gave him a cocktail of medications to remedy a throat ulcer, in addition to painkillers for management of his unrelenting head and jaw pain.  We took it easy for the first week as his body adjusted to the onslaught of drugs, but we did manage to maintain our daily morning walks by strolling around the neighboring cemetery on a little hill that pumped up our heart rates.

Silver City is a vibrant little artsy town that was our gateway to several explorations.  When Steve was up for it we spent time walking the historic downtown and driving the scenic wide open space of the Gila wilderness.  We also tackled a few “real” hiking trails, visited historical spots and attended events in town.

The Gila Cliff Dwellings National Monument is just an hour’s drive from Silver City on a scenic and sometimes narrow road.  It’s an interlinked dwelling built in alcoves within a remote canyon deep in the Gila wilderness.  The dwellings were built in five cliff alcoves by Mogollon peoples between 1275 and 1300 A.D.

A ranger describes the cave dwellings

Petroglyph at the Trail of the Ancients

Stepping down from cave 5

On another day we went to White Water Canyon, where we followed the easy Catwalk National Scenic Trail.  The sheer cliff walls rise out of the stream bed, and metal walkways are supported on steel beams drilled into the rock 20′ above the water.  It zigzags from cliff to cliff as it winds through the canyon.

The walkway was originally built by the Civilian Conservation Corps and was named The Catwalk, referring to the original plank-board walkway that was placed atop the steel pipe used to bring water to the ore processing plant downstream.

Just southeast of Silver City is the City of Rocks, consisting of rows of monolithic blocks formed by volcanic ash welded together 35 million years ago. 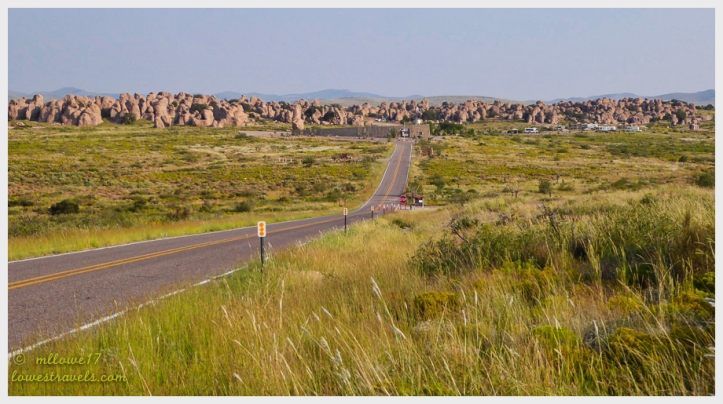 While roaming around the rocks, we imagined the various formations as a small city containing houses, chimneys, courtyards and streets.

House with a chimney

Back in Old Silver City, we enjoyed seeing the Silver Steamroller Street Printing Event which was featured during the Southwest Print Fiesta.  We watched as large-scale hand carved blocks were inked, placed on the street, and pressed onto paper by a 3,000-pound steamroller.  Very cool!

And viola, a giant print!

While in southwest New Mexico previously, we experienced their unique cuisine, and one of the biggest questions here is, “red or green?”  At the center of it all is the New Mexican hatch chile, in both red and green varieties, which is used in everything from enchiladas to ice cream.  We tried it again this time, but Steve learned the hard way that it was too spicy in his current condition.  Oh well, I still love the green ones! 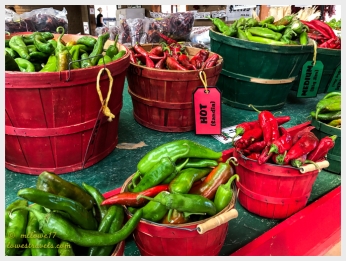 Why did I order that?

After a month in Silver City we moved on to Elephant Butte Lake State Park.  We had heard good things about this place, where the lake is the largest and most popular in New Mexico.  Here we continued to chill and enjoy the view together in the peace and quiet of late-season camping.

I was looking forward to a visit to Bosque del Apache Wildlife National Refuge, but was disappointed to learn I was too early for the arrival of migratory birds.  At least while driving the scenic road I was able to take in the sights of mountains and expansive meadows, and to enjoy some wildlife encounters: 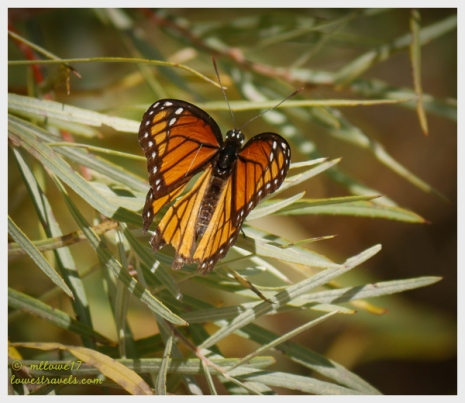 Moving from nature to astronomy, the Very Large Array Radio Telescope located west of Socorro, NM was something to behold.  It uses 27 dish antennas in a Y-shaped configuration, which work together as a single telescope system with an eye up to 22 miles across.   It collects and processes into digital images the radio waves emitted by astronomical objects.

And then it was time for us to fly away for our long-awaited river cruise in Europe!

Before leaving, we secured Betsy at the home of our very gracious friends Hector and Brenda of Island Girl.  They were kind enough to keep an eye on her while we were cruising around Europe.  Hector is an accomplished professional photographer, and like us you may want to be wowed by his work at H.M. Lopez Photography.