It’s been more than three months since my last post.  We’ve been on a self-imposed blogging hiatus, as I just haven’t been motivated to write.  We’ve been plenty active, it’s just that we were thrown a curve ball that forced us to re-focus on the more pressing issue – Steve’s radiation regimen.  At this point he has completed 33 treatments and is gradually recovering.  Click here for the story of his cancer journey thus far.

Being sick in a town where there are no family or friends around can get a bit lonely.  We can’t thank enough all of you who have reached out to check on Steve’s progress.   The wonderful soup that Suzi (Belugas Excellent Adventure) sent us was perfect when Steve was on a full liquid diet.  Ingrid (LiveLaughRV) obliged him with cake and cookies at the beginning of his treatments, and John and Pam’s (oh the places) regular cheer-up messages always brought a smile to his face.  The virtual hugs that Laurel, Sharon H., Gloria C, Judy G, my sisters and so many others have left during the past few months have been very comforting during some tough times.  Thank you all so much!

We also had guests visit: my friend Wilma and her family from Alaska stopped by for a couple of days, and Vic, Steve’s BFF from California flew in to cheer Steve up during his radiation “blasts”.

Waiting for a sunset with Vic

Dealing with the medical circumstances was even more challenging while living in the summer heat of Tucson.  We endured the second-hottest June on record, and one of the wettest July monsoon months ever recorded.

During late July through August, the summer monsoon (considered to be the “fifth season”) set in.  We rode out dramatic thunderstorms, spectacular lightning displays, flash floods and dust storms on a daily basis, along with humidity often in the 90% range.  Not something we’d ever do if we didn’t have to!

Highlights of our heat reprieves

Working around Steve’s radiation sessions, we fought cabin fever and sought out cooler temperatures.  Our goal was to break the monotony of our daily 5:30AM walks around the RV park, where I completed my 10k steps and Steve knocked out his 3 miles.  This had to be done by 7AM because the heat was already stifling by then.

A change of scenery was required to avoid complete boredom, so we took some short trips when Steve was up to it.  Here’s a summary of some of our explorations:

One place locals go to escape the heat is Mt. Lemmon.  It’s the highest mountain in the Catalina Range north of Tucson.  The drive up the mountain is via the Sky Island Scenic Byway.   To enhance our experience we downloaded the Mt. Lemmon Science Tour app, which we recommend to anyone who wants to take the trip.  The app is well done, paced to match the scenery along the way.  When we left the RV park it was 101º, but up on the mountain it was a “cool” 83º. 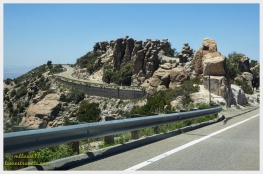 At an elevation of about 5000′, Payson, Arizona was our home base to explore Tonto Natural Bridge.  It’s believed to be the largest natural travertine bridge in the world, standing 183′ high over a 400′ long tunnel that’s 150′ at its widest point.  We followed three trails that led to the creek bed and the tunnel, where we saw the enormity of this natural bridge.

Going down to the south end of the natural bridge

Looking up at the travertine formations

On our way home from Payson, we took a scenic route on Hwy 188 heading south.  This allowed us to stop at the Theodore Roosevelt Bridge and Dam.  They are at the eastern end of the Apache Trail which is 40 miles of steep, winding and mostly unpaved road that passes magnificent scenery of twisted igneous mountains.

Steve wondered what took me so long inside the restroom at Arizona Hops and Vines.  I told him to take a peek to see for himself:

Another nearby refuge from the heat is 363 steps below ground, where one can enjoy the constant 70° cool of a cave.  For about an hour we listened to our tour guide and learned the history of the Colossal Cave and Mountain Park above it.  He claimed this is the largest “dry cave” in the U.S.  A dry cave is one where the water that deposits limestone has disappeared and the formations are no longer active or growing.  We’re not sure if his claim is correct or not.

As Steve’s pain and fatigue eased, he tackled some projects on Betsy: 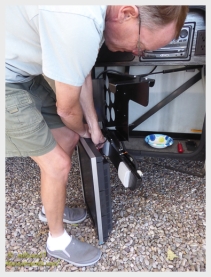 Fixing the outside TV 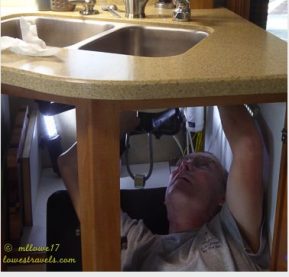 Replacing legs on my Mexico tables 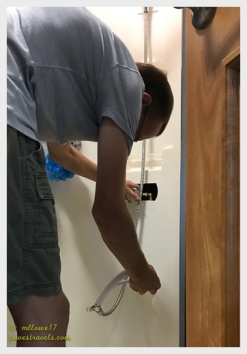 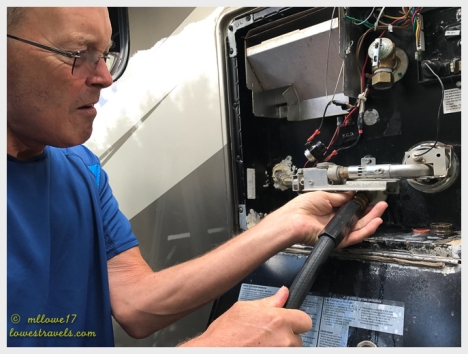 Tucson is certainly not a nice place to be in the summer when your home is a fiberglass and metal box.  Four months stationary was by far the longest Betsy has been parked.  Looking back at those days we’re very grateful to have that unpleasant summer behind us.