The rest of our scenic hikes – Glacier NP, MT

Although we’ve spent three weeks at Glacier National Park, we hiked only a few of its 734 miles of trails.  This place offers many outdoor activities, but exploring on foot remains our preferred method.

This is my 4th post about the park, and I hope folks remain interested in seeing the incredible views, wildlife and wildflowers there.

If you missed those previous posts, click here for enchanting waterfalls, here for picturesque lakes and here for receding glaciers.

One of the top hikes at GNP is the moderately-difficult Highland Trail.  If you can do only one hike, this might be the one.  It’s rather long at 7.6 miles one way, but there’s a nice turnaround spot at Haystack Butte or anywhere else along the way if you’re just looking for a short trek that displays the best that the park has to offer.

The trail follows the Continental Divide below the sawtoothed Garden Wall and gains 1,300′ (and losses 3,700′ if you go all the way to the Loop at Granite Park Chalet).  The first 7.6 miles from Logan’s Pass to the chalet filled our eyes and camera cards with the incredible beauty of this place.  We trekked past streams, creeks, avalanche chutes, alpine meadows, wildflowers galore and several Bighorn Sheep.

The final 4 miles on the Loop Trail from the chalet is a steep downhill knee-rattling hike through burned forests to the Loop Shuttle Stop.  But what a hike it was!

For this hike, we parked at Logan’s Pass at 7AM, hiked the trail 11.6 miles one way over the Highline and Loop trails, then caught the shuttle at the Loop Shuttle Stop to get back to the visitor center at Logan’s Pass.  It was a long and fantastic hike.

On paper, this one scared us a bit.  A 2,300′ elevation gain over 3.9 miles to the top?  Honey, hand me the Advil!  In reality the incline was constant over the whole ascent, with none of the knee-killing super-steep ascents I had feared.

This trail gradually leaves the woods behind and just as we crested a ridge some barren patches of dead trees came into view.  The chalk-white trees were a result of Whitebark Pine Blister Rust, a fungal disease that was accidentally introduced from Europe around 1900. According to a park brochure, nearly half of the original Whitebark Pine population here is already dead.  It’s estimated that more than 75% of the remaining trees are infected with the disease as well, and they will die within the next 20 years.  Very sad, and major scientific work is being done to squash the epidemic. 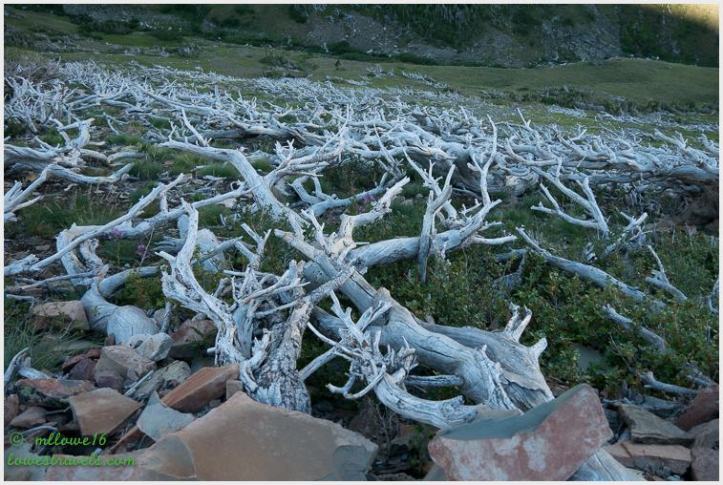 Two Medicine Lake is out of the main area of the park, and much quieter – we encountered only a few people on the way back down.

Apgar Lookout (west side of the park)

The day we tackled this 7.1-mile out and back trail, rain was forecast to arrive at 11AM.  To get ahead of it we began early and picked up the trailhead at the southwest corner of the park.  It climbed to a two-story wood frame lookout tower at the summit that was built in 1929.

Although no longer in use, the fire tower is considered an historical structure, and is listed on the National Register of Historic Places.  For the most part this trail is exposed, as the area was ravaged by the 2003 Reynolds fire that gutted 13% of the park’s total area. 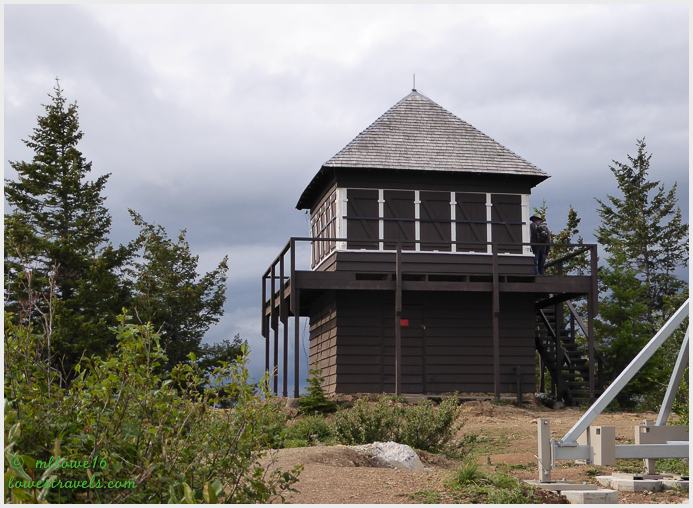 At the summit, we had a so-so view of Lake McDonald and some of the distant peaks of Glacier NP.  We enjoyed our perch for only a short time, as we could feel the weather change and hear thunder in the distance.  Even though it rained on us a bit on the way back to the car, we got a great workout hustling down the mountain.

A couple of feathered friends gave us “the eye” as we made our way along: 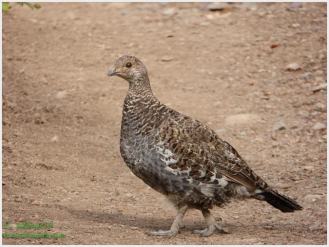 This trail is actually outside of Glacier NP and on the nearby Whitefish Mountain Ski Resort.  What makes it interesting is that it offers options to ride the ski lift down after a 4-mile hike up to the summit, or up first to hike back down.  We had originally intended to hike up and down, but an appointment for Betsy forced us to pick one – and of course we chose to hike up and ride the lift back down.

After all the crazy roads Betsy has been on, we finally got a big rock hit on a nice stretch of Montana highway.  It cracked about 6″, and we called a repair guy to come out and try to stop it from progressing.

The crack is near the bottom of the windshield, so it’s not in our field of view as we drive.  If we make it in and out of Canada with no further damage, we’ll reassess and determine whether to replace the windshield.

John and Sharon of On the Road of Retirement had arrived in the area, so a meet-up was in order.  We had lots of catching up to do, since we last saw them when we met in Florida in January of 2014.  It appears our paths will be criss-crossing this coming winter, and we’re looking forward to more get-togethers with them.

We had a blast shopping at the local stands and markets around Hungry Horse and Columbia Falls, getting all the goodies we’ll need for the next part of our journey:

Flathead Cherries were in season 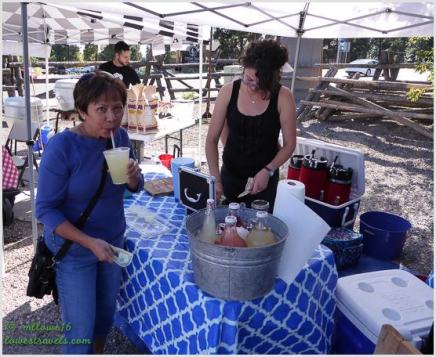 This ginger brew was potent!

While on the west side we camped at Mountain Meadows RV Park (Steve’s review here).

Although both sides of Glacier NP offered tons of outdoor fun, we preferred hanging out on the east side, where we enjoyed less crowding and more choices of hiking trails.

And yes, we took a break from all of those scenic hikes:

Our three weeks of exploration at Glacier NP was memorable.  It’s definitely near the top of our list of favorite National Parks!