A journey back in time – Seminole Canyon SP, Comstock, TX

What we saw while driving northwest along US-90 towards Seminole Canyon State Historical Park was flat wilderness – all the way to the horizon in every direction.  I’ve heard a lot about boring drives through Texas, and I believe this is one of those parts of the state that people refer to.

Seminole Canyon State Historical Park is located just off US-90, at the junction of the Pecos and Rio Grande rivers.  So of course that puts it right on the border with Mexico.  The rugged 2,172-acre park features some impressive deep canyons with rocky terrain and sparse desert vegetation.  And hey, there are lots of birds here, too 🙂

With a week to explore under sunny skies, we were both pumped up and ready to go exploring every morning.  During our stay we racked up 29 miles of walking and hiking throughout the park, completing every trail – and some of them several times.  We finally got our leg muscles back in shape!

The trails here were rocky but not difficult, with only a 210-ft maximum elevation gain.  We found that the trail listed as “strenuous” was really only “moderate” by our standards, but perhaps they were considering the condition of parts of the trail more than physical difficulty. 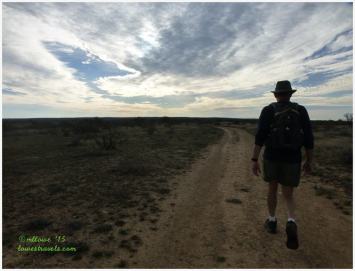 Parts of some trails were a bit boring, but coming upon the rim of the deep canyons and the river that ran through parts of them took our breath away.  Fortunately, it was springtime and some sparse wildflowers could be seen blooming along the trails.  That stopped me in my tracks for a few shots of the beauties. 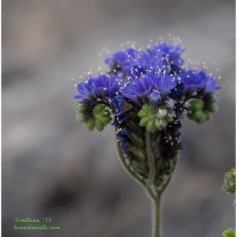 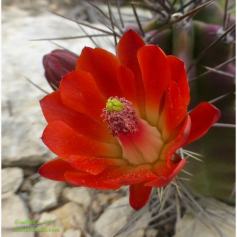 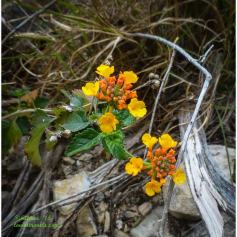 We were excited to see a couple of Javelinas walk across a trail in front of us!  They were too quick for us to get a picture, so Steve ran through the scrub brush with the camera to pursue them.  He finally gave up, with nothing to show for his efforts but a bunch of cactus scratches on his legs that are still healing.

A point of interest along one of the trails was the Panther Cave Overlook.  It lies at the confluence of Seminole Canyon and the Rio Grande.  Panther Cave is a rock shelter used by the Desert Archaic culture between about 1,300-8,900 years ago.  Visible across the canyon from the cave was an immense pictograph panel that spanned the back wall of the rock shelter, and it included a panther image nine feet long.  Access to this cave shelter is by private boat only, and tours had been canceled due to shallow waters.

I zoomed into the cave from across the canyon, and the Panther was visible on the right side of the wall.  The plaque at the overlook indicated that some archeologists believe the Desert Archaic people were depicting the shaman’s journey to the spirit world.  Caves and rock shelters like this one served as sacred portals or passageways for the shamans, and the panther represented an animal tutelary or guardian that protected them.

We were interested in viewing some of the ancient rock art, and this park’s focus is on the Fate Bell Shelter, the largest rock shelter in the region.  In many of the canyons, erosion over millions of years has carved massive rock overhangs that were used by prehistoric Indians for shelter.  Hiking in the canyons and viewing rock pictographs can only be done on guided tours.  We joined two of the tours to see some prehistoric rock art, and to walk on the floor of the canyons.

The Fate Bell Tour involved a fairly rugged walk to the bottom of the canyon, then over to the huge cliff overhang containing many good examples of Pecos river style pictographs.

Radiocarbon dating suggests these pictographs were created between 2,950 and 4,200 years ago.  Because they are so old, experts know very little about the people who created them.  The walls were once densely painted, but only isolated panels have been able to resist the effects of time and indiscriminant looting of the site before its acquisition by the state.

Our tour guide explained that colors were made with pigments from local stones such as hematite (red ochre) for red, limonite (yellow ochre) for yellow, manganese oxide for black and calcite (or gypsum) for white.  These rocks were ground into a fine powder and mixed with a binder (probably animal fat) to make the pigment stick together and to the wall. The soapy juice of the yucca plant root, mixed with water, may have been used to thin the pigment and fat mixture into a smooth paint that has held up for thousands of years.  Is that amazing or what?

One of the guided tours we joined was the Upper Canyon backcountry hike, which included visits to a variety of sites that had prehistoric and historic rock art styles.  The latter of these were created by folks who built the railroad in the 1880’s that ran through this area.

Did I forget to mention that this park is also another Texas birding trail?  The Pyrrhuloxias shown below, along with many Cactus Wrens, alternately sang to us during our walks.  And the Canyon Towhees and Black-throated Sparrows helped the beautiful Cardinals empty our feeder every day.

The birdies all knew there was free food at site #1, and we spent many hours sitting by our campfire and watching the excellent variety of birds competing for the goodies.

A sunset with bird silhouettes capped a wonderful week full of outdoor fun.  The sun was finally shining on us!

All of the outdoor activities made me forget my strange medical issue.  I want to express my appreciation to everyone for sending me your warm thoughts and messages of concern. Just the thought that all of you are thinking of me makes me feel better.  I will soon find out what my new doctor has to say!