What to do in Perdido Key, FL?

Located on a thin strip of land in the extreme northwest corner of Florida, Perdido Key is known for  its rolling, white-sand dunes and stunning views of the calm gulf waters. Stretching 16 miles and surrounded by federal and state parks, it is connected on the east by bridge to the city of Pensacola and to the west by bridge to Orange Beach, Alabama.  So this town is within only 30 minutes either way of all the summertime commotion, yet it is secluded enough for relaxation in a laid-back beach atmosphere.

Using this spot as our home base for a week, we ventured out.  The weather was chilly and windy during the first few days, but that didn’t deter us from making our first and only stop in Florida for a while a busy one.  We plan to spend a lot more time exploring Florida next winter, but we now have a good feel for this part of the state.

A glimpse of Perdido Key

Armed with a recommendation from Erin of Two to Travel’s Phaeton Journeys about the nearby Naval Air Station – home of the Blue Angels, we ventured out on a breezy Tuesday (with a windchill of 37 degrees) to watch them perform their air show practice.  We had seen them during an air show while still living in California, so this was our second show – but this one was free!  We enjoyed watching them soar overhead, performing their thrilling aerobatics.  On an unfortunate side note, we also learned this was their last week of rehearsals and shows, grounded as a result of federal budget cuts.  They won’t be seen in any air shows this year, so you will just have to enjoy my photos and imagine the deafening roar of the jets 🙂

The Blue Angels is the Navy’s famed precision flying team.  Their mission is to enhance Navy and Marine Corps recruiting, and credibly represent Navy and Marine Corps aviation to the United States and its Armed Forces to America and other countries as international ambassadors of good will.

It was very crowded at the Blue Angel’s rehearsal, which is held next door to the National Naval Aviation Museum.  It seemed like all of the spectators (well, the kids were still on spring break) also went to the National Naval Aviation Museum after the show.  This museum is the world’s largest Naval Aviation museum and one of the most-visited museums in the state of Florida.  And why not – free admission, free tours, free parking and free education and learning about all the cool stuff the Navy does.

This propeller is made entirely of bronze and weighs over 27,000 pounds.

The museum is where naval aviation’s rich history and more than 150 beautifully restored aircraft representing Navy, Marine Corps, and Coast Guard Aviation are on display.

One cool thing we did was join the virtual Flight Deck Operations, Mission: Launch & Recover Aircraft aboard the USS Enterprise aircraft carrier.  After an explanation by a naval expert of how the steam-powered deck catapult works, we experienced the virtual ride which was complete with blowing wind and engine noise of the aircraft taking off and landing on the carrier deck.  That was really enjoyable, yet I would not dream of working there!

Where else can you learn about the definition of a “Navy Shower”? 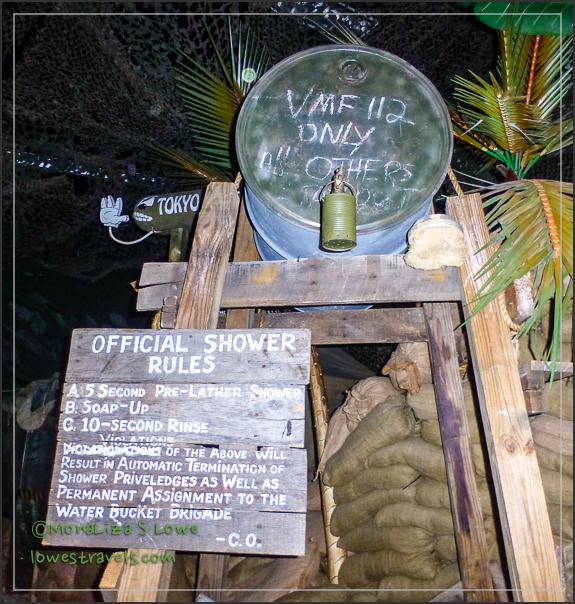 And I pretend to disembark from Marine One… 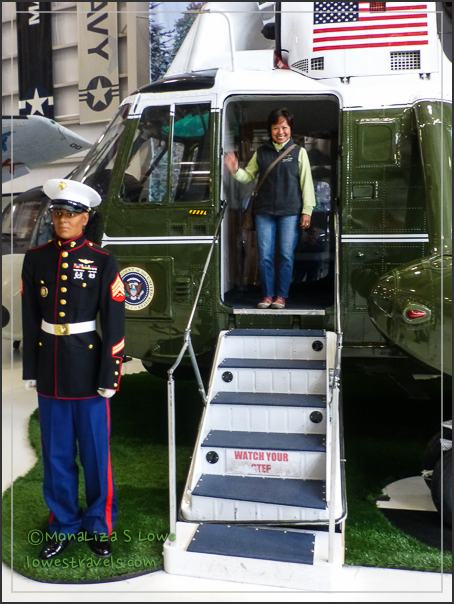 Hail to the chief! This is Richard Nixon’s actual Marine One helicopter.

There was so much to read and gawk at, we could have spent a whole day reading through all the plaques.  But after several hours our tummies were grumbling and we had big lunch plans.  Following another tip from Ayn of RoadLife, we drove to Peg Leg Pete’s restaurant to check out why it is so popular.  Although there was a long line when we arrived on a Tuesday at 1:00pm, we were seated within fifteen minutes.  And we weren’t disappointed, the seafood was excellent and very fresh.  They even served Guiness on tap – Steve loved it!

With satisfied, full tummies we continued our exploration by going back to the Naval Air Station where we visited two historic sites, Fort Barrancas and the Pensacola Lighthouse. Fort Barrancas sits on a bluff overlooking the entrance to Pensacola Bay.  The fort functioned with Fort Pickens and Fort McRee across the bay to create a brutal crossfire against any enemy warships.  Touring the Scarp Gallery, we noted a series of arches which at the time were applied by the military as the latest design.  This was state-of-the-art engineering, as these arches are extremely strong and hold up better than flat structures.

A Florida Landmark, the Pensacola Lighthouse rises 160 feet into the air and has towered over Pensacola Bay since 1858.  It is still in use today.  The lighthouse played a central role in local Civil War events.  We climbed the 177 steps to the top and were rewarded with a gorgeous view of the Naval Air Station, Ft Pickens and the white sandy beaches and aquamarine waters of Pensacola Bay.

Stairway in the lighthouse -177 steps in all

Views from the top of the lighthouse:

Categories: Florida, Where we have been