We did something a bit different upon leaving Dauphin Island for our next destination, Gulf Shores, AL.  You see, the ferry is taking only cars and motorcycles right now; no RV’s.  So, Steve had to drive Betsy 85 miles along the Alabama Scenic Byway (not a bad gig) while I simply hopped a ferry ride across Mobile Bay to Gulf Shores – 29 miles total for me!  The Mobile Bay Ferry connects Fort Gaines at Dauphin Island to Fort Morgan on the Gulf Shores side.  Luckily, there was no threat of torpedoes during my crossing, or I guess Steve would have had the last laugh after all!  It was a fun ferry ride as I got a closer look at some oil rigs along the way and watched seagulls trying to catch a free ferry ride.

Once settled in at the RV park, we hopped into our dinghy to check out the area.  Gulf Shores is a popular resort destination, hence more frenetic compared to the quite slow-paced life at Dauphin Island.  And add to that, it’s spring break!  The beach and nearby restaurants at Gulf Shores were busy with spring breakers.  Fortunately, most of our desire for long walks on sugar-white beaches and sunny days had been satisfied while we were on the Island.

Taken from the Gulf Shore pier

Not only were the beaches packed, the RV parks were also booked with snowbirders from northern States.  We wanted to stay at either Gulf Shores State Park or Meares State Park (both with over 100 sites), but snowbirders apparently booked their monthly sojourn months in advance, keeping them full until April.  We managed to snag the last spot at Island Retreat RV Resort (love it when they call their park a “resort”) for a few days.  Here, many of the guests were from Michigan, while the rest were from Missouri, Minnesota and Kentucky.  There are no RV parks on the beach here, but the Gulf Shores State Park is very close.

For several months now, we have been using the site RV Park Reviews as a resource for our upcoming trip stops.  Steve is now contributing reviews to the site for each park we use.  Although we realize these reviews won’t be helpful to everyone because “different strokes for different folks” and the fact that conditions at parks can change fairly often, we will create a link to our reviews in case you want to take a look.  For now, click here to read Steve’s recent park reviews.

View from the back

Although the 32 miles of white sandy beaches is the main attraction at Gulf Shores, there are a lot of other things to do here.  For historians, Fort Morgan Historic Site and Museum is at the tip of the western peninsula, where I disembarked from the ferry.  Alabama is a birding paradise – on the coast alone there are six Alabama Coastal birding trails.  When in this area, fresh seafood is king when it comes to restaurants.  With the help of one local dude we found one to satiate our taste buds.  At Tacky Jacks, the atmosphere is casual and the food to die for is the Cajun Shrimp Pasta.  Jason was so right, it was simply the best shrimp pasta we had tried so far.

Since we were now near civilization, we took care of some business. With the big “T” day approaching, we gathered all tax docs and did a conference call with our tax preparer, did some banking changes and most importantly we trashed errr… I mean cancelled our Verizon MiFi contract.

Nina’s thorough post about their wifi set up and a personal tour of the setup used by Hans and Lisa at Metamorphosis Road finally pushed us to abandon our appalling Verizon MiFi device and move to Millenicom’s device.  It also uses Verizon service, but the old device never worked correctly and after replacing it multiple times we gave up.  Steve’s blood pressure is almost back to normal now!  Using a micro-to-mini cable to charge the MiFi from the Wilson cradle as Hans suggested also helped clean up the wiring, so everything looks nice mounted to our power panel.  Thanks for the help, all!

With all of our business completed it was time to relax and act like retired people!  Our RV park was along a nice paved bike trail, so we took an 11-mile ride along Fort Morgan Road Trail.

Hiking and viewing the birds along the Bon Secour National Wildlife Refuge was a good way to get away from the crowds.  We walked 10 miles along the interconnected Pine Beach Trail, the Jeff Friend Trail, Gator Lake Trail and the Centennial Trail (all part of the Fort Morgan Loop .) 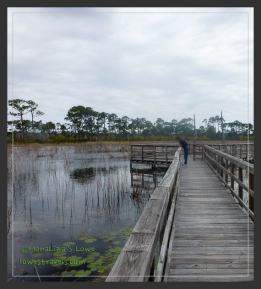 Here are some of the resident birds.

The south is known for its  hospitality and I felt it here, for I was addressed as “ma’am” at the store, restaurants and most other places.  That’s much nicer than what Steve usually calls me!  I’m beginning to like this place.