Like the emigrants before us, we continued our northward trajectory and crossed into eastern Oregon.  We wanted to stay at Baker, close to the National Historic Oregon Trail Interpretive Center, but due to a rally event all campgrounds were fully booked. That seems to be happening more and more often these days…

So instead, Betsy hauled us up onto Flagstaff Hill, where the center itself was located with lots of parking.

While our last post about Glenn’s Ferry, Idaho, documented the perilous three island crossing, here at the National Historic Oregon Trail Interpretive Center the focus was on six themes related to westward migration and settlement: pioneer life on the Oregon Trail, mountain men and early trail travelers, Native Americans along the Oregon Trail, natural history along the trail and in Eastern Oregon, mining and early settlement, and the history of the general land office.

Pioneers Home on the Trail 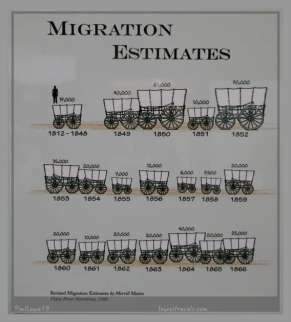 One person’s food requirement for the journey

Thanks to the emigrants who wrote about their epic journey as it unfolded, a rich and exciting legacy of journals and letters were left behind.  From them, we learned about their struggles over grasslands and sagebrush, rivers and mountains, and through sickness and fear:

Outside the center, we followed a 4.2-mile trail that led us to historic sites and panoramic views of the Blue Mountains as we arrived at the wagon wheel ruts.  This area was a former wagon encampment, where the distinct imprint of several sets of parallel ruts are marked and preserved.  The pioneers rested here before moving on to their final destination in Oregon City.

There was a replica of the preferred and practical mode of transport – a prairie schooner.  We learned that the emigrants mostly walked all the way, about 20 miles a day for six months alongside their wagon filled with food supplies and personal belongings.  Imagine for a moment the travelers coming down a hill and grinding the earth into a fine powder as a huge cloud of dust lingered all around. 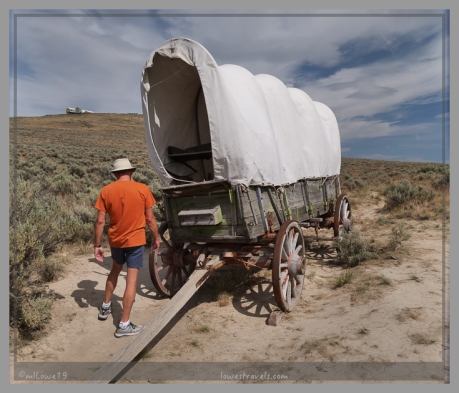 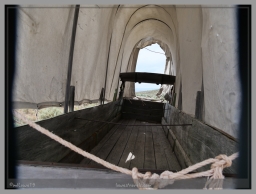 Usually only provisions rode in here

During the visit, we were reminded again about how incredibly difficult the journey must have been for folks traveling 6 months and 2,000 miles over an unknown and strange expanse of land to arrive at a place where they might have a better life.  We’ve seen actual ruts in the hard-packed dirt created by wagons that people led over the fields and hills.  Most didn’t ride on the wagons as portrayed in movies – the wagons held their supplies.

When we were at Scott’s Bluff and Chimney Rock in Nebraska (click here for my post) we learned how the pioneers used Chimney Rock as a navigation point, staying along the Platte River so they could stop for a rest and have water for their animals.  But it was only a mid-point pause on their incredible journey to the west, with the hardest part over the mountains with nasty weather along the way a live-or-die proposition still ahead: 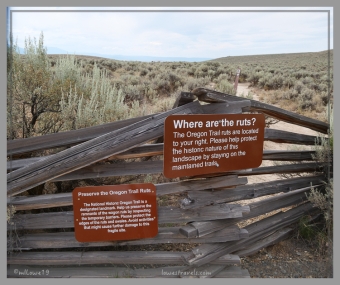 Whether they were Mormons establishing a new place to live in order to avoid persecution, or others hoping to find a better life in the west, they were amazing in their strength and resolve.  Standing in a silent field near the Interpretive Center and looking at those wagon wheel ruts allowed us a moment to imagine what it might have been like to make the tremendous journey.  Walking back to the RV, we were humbled to appreciate how easy we have it now.

In 1978, the U.S. Congress officially named this trail the Oregon National Historic Trail.  Although much of it has been built over through the years, around 300 miles has been preserved and in places ruts made by those pioneer, wagons can still be seen.

After the stopover in Baker, we continued on to La Grande, where we camped for a few days.  This was a repeat visit to an agricultural town surrounded by blue mountains.  It may even make it onto our list of possible places to settle down in the future, although the winters can be a bit cold.  We followed two hiking trails at nearby Mount Emily Recreation Area: Red Apple/Rock Garden Trail and the MERA Loop.

Huckleberries were in season, and I was wishing I had a basket with me! 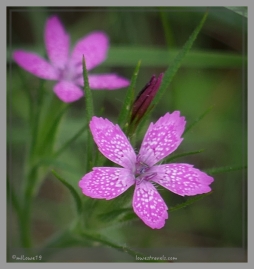 We stayed at Grande Hot Spring Resort , where we had free access to dip and soak in their hot springs.  How we wished we had similar access at prior campgrounds so we could soothe our aching muscles after those strenuous hikes!