During our six years of travels we’ve never been inside an Ice Cave, and we certainly didn’t expect to find one in the Idaho desert.  So when we discovered that Shoshone Ice Cave was right on the way to our next stop, we weren’t going to miss it.  The place has a huge parking lot, even big enough for Betsy with the car attached!  She was well watched as we went inside for our guided tour.

With time to kill before our guided tour began, we perused the small museum to learn a few interesting tidbits about the cave.  The photo below especially caught my attention – ice skating inside an ice cave!

During the tour, Garret, our young tour guide told us that this natural ice chest had been used to advantage by early settlers, and it was the only place within hundreds of miles folks could get a cold beer at the time.  Years later it became well known, and like many things it was abused by man as all of the ice was removed and shipped throughout the area for refrigeration purposes.  As this was done, the front of the cave was opened up and the critical airflow needed to produce ice was destroyed.

Coming to the rescue was Russel Robinson, who bought the land in the 1950’s.  He researched air flow patterns through the cave and re-sealed the entrance to restore the natural environment inside. After several years the ice was restored, and the cave was opened for guided tours.

We were advised to bring a light jacket, as the temperature inside the lava cave remains constant at 28º.  It was a fairly short tour, and macho Garret sported a T-shirt as he pointed out various features and facts about the amazing place. 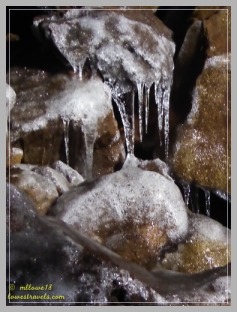 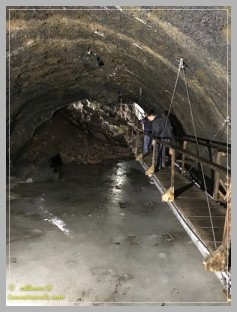 Russel Robinson’s legacy was patience and hard work, as he restored this unique spot in the Idaho desert – pretty much in the middle of nowhere.  It was not a grandiose cave like others we’ve visited, but it was definitely unique and worth the stop.  If you’re ever driving on I-75 between Twin Falls and Sun Valley you may want to check it out – especially if it’s a hot day!

A spring attraction that caught my interest was seeing the Camas Lilies in full bloom. Whenever we’re close to wildlife sanctuaries, prairies or flower fields, I’m all over it (usually without Steve, as he happily hands over the car keys).  So with my camera in tow, I drove to the Camas Prairie Centennial Marsh located in Fairfield, Idaho.  On the way there I found my answer to the question, “Where’s the beef?”

A festival is held in Fairfield to celebrate the annual “Big Bloom” of the Camas Lilies, which occurs throughout the month of May.  The Camas Prairie here runs along both sides of Highway 20 and is about 15 miles long, but for the best viewing I continued further to the Camas Prairie Centennial Marsh.  For thousands of years, these same plants sustained Native Americans living in the area.

Well, my doubts were confirmed – I was a bit late and past the peak bloom.  I missed the blanket of blue in the valley that I was hoping for, but was happy that I’d brought my telephoto zoom lens.  Most of the remaining blooming lilies were a long way from the road, but I enjoyed my photography session as the songbirds and ducks kept me company.  It was quiet and peaceful as the breeze rustled through the prairie grass.

To complete my “C” themed post, we spent a half day visiting Craters of the Moon National Monument and Preserve.  What we saw there brought to mind the volcanic havoc underway in Hawaii.  Many of the plaques along the walkways referred to the Kilauea volcano while describing what we were looking at.

Geologists have found that although the craters here are volcanic in nature, it was not a volcano that created this moonscape.  Rather, it resulted from several eruptions originating from a series of deep fissures known collectively as the Great Rift that crosses the Snake River Plain.  Eruptions from deep cracks in the earth forced lava up to create cinder cones, spatter cones and lava tube caves.  The most recent eruption was only 2,000 years ago.

We followed the 7-mile loop road that took us around various volcanic features: 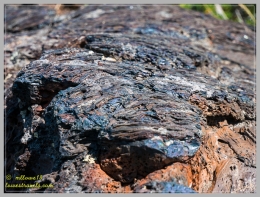 The outline of a tree molded in the lava

We were amazed that while seemingly barren, the lava fields have become islands of vegetation, and we’d arrived during the annual wildflower blooms.  These plants have adapted to the harsh environment and we noticed they grow close to the ground to resist losing moisture from the heat and wind.

And the star of the moonscape was the Dwarf Monkeyflowers that painted the lava fields in a sea of pink:

Being here during the wildflower bloom enhanced our appreciation of the barren landscape.  But according to biologist Richard J. Vogl, “What you see depends mainly on what you look for.”