Dearborn, Michigan was not originally on our route of travel, as we had planned to stay closer to Lake Michigan while heading north.  But during a Skype call with our good friends Don and Lisa, they suggested meeting up in the Dearborn area to visit “The Henry Ford.”

Since this was the first we had heard of the place, we envisioned something like the Edison & Ford Winter Estates, which we visited last winter in Fort Myers, Florida.  But how wrong we turned out to be!  Although Henry Ford’s main estate is nearby, it’s only the beginning of what has been put together to celebrate the man’s life and legacy.  His empire was and is huge!

Entrance to the massive complex

The Henry Ford is a large indoor and outdoor history museum complex, and has been designated a National Historic Landmark.  It consists of five distinct attractions; The Henry Ford Museum, Greenfield Village, IMAX Theatre, Benson Ford Research Center and the Ford Rouge Factory Tour.  It took us three visits to explore and take it all in, so we’re glad we had reserved our RV spot for a week.

I am collecting the history of our people as written into things their hands made and used…. When we are through, we shall have reproduced American life as lived, and that, I think, is the best way of preserving at least a part of our history and tradition… Henry Ford

With that vision, Henry Ford established this museum in 1929 to honor the common genius of the American people.  The museum is NOT just about cars, although there are plenty of them here.  What fascinated us were the collections of authentic objects that brought to life the stories of ordinary people who changed the world.  As I mentioned, it’s a big place – 2 acres under one roof just for the museum – and it took many hours to see everything.  I can only hope to give you a feel for it. 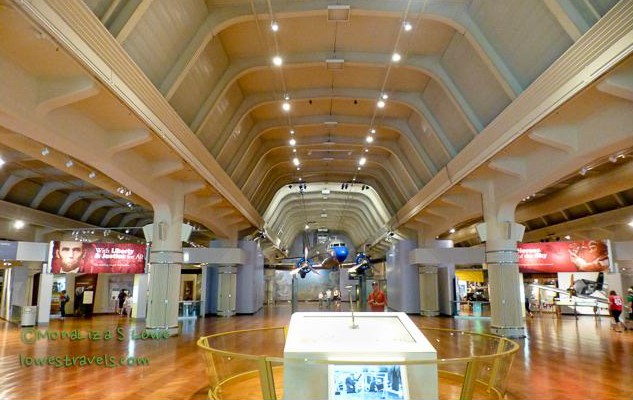 At over 600 tons, this 1941 locomotive is one of the world’s largest and heaviest.  Amazing! 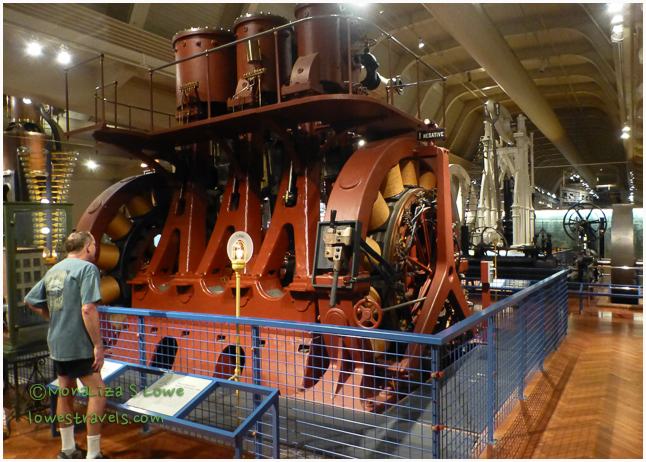 Even a furniture section! 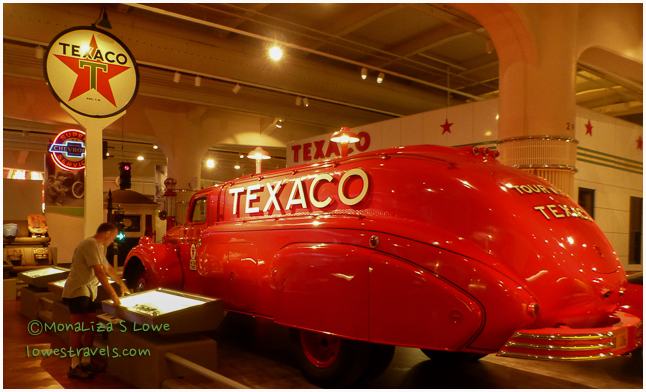 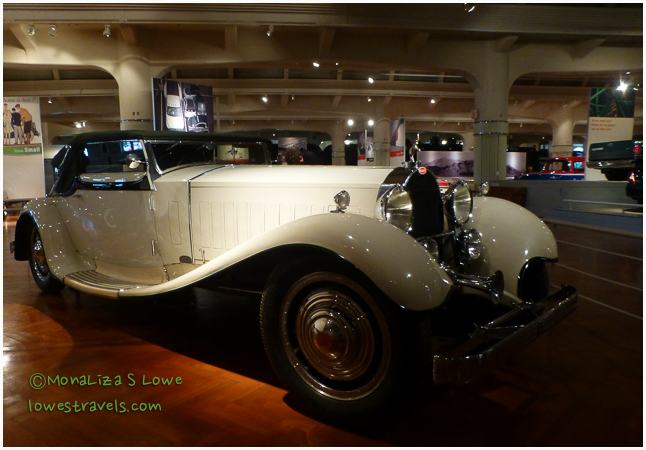 A special display showing from May to August was a celebration of the Women who Rock, a collection of must-see memorabilia from the most-recognized women in rock and roll history.

Viewing, reading and being amazed at the collection of antique machinery, pop culture items, automobiles, locomotives, aircraft, and other items took us a good part of a day.  This place has something for anyone who comes in! 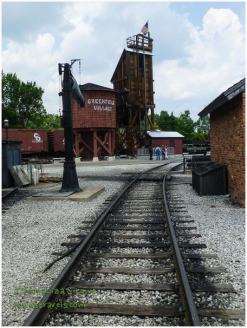 On our next visit, we checked out Greenfield Village, which is right next door to the museum.  In this area, Mr. Ford transplanted and preserved famous historic structures, arranging them in a “village-like” setting.

This place sort of reminded me of Colonial Williamsburg in Virginia complete with docents in period outfits.  Since Greenfield Village is on 240 acres of land, we first hopped on the train pulled by an historic steam locomotive to ride around the perimeter and learn the layout of the huge property.

Hop aboard the steam locomotive!

The village included the actual bicycle shop where the Wright brothers built their first airplane in Dayton, Ohio, Thomas Edison’s laboratory from Menlo Park, an Illinois courthouse where Abraham Lincoln practiced law and the Dearborn farm where Ford himself was born and much more.  There was also a collection of several craft buildings and workshops.

One cool thing we did was rode on an authentic Ford Model T around the village while our driver pointed out the various historic districts and talked about the car we were riding in. 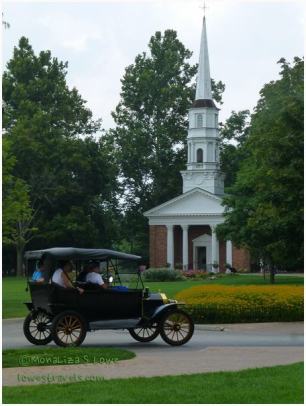 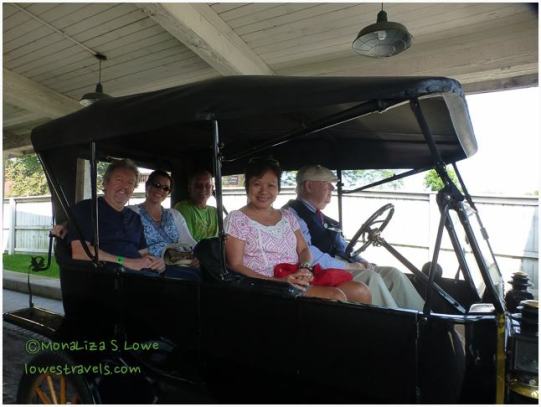 A bunch of happy campers! 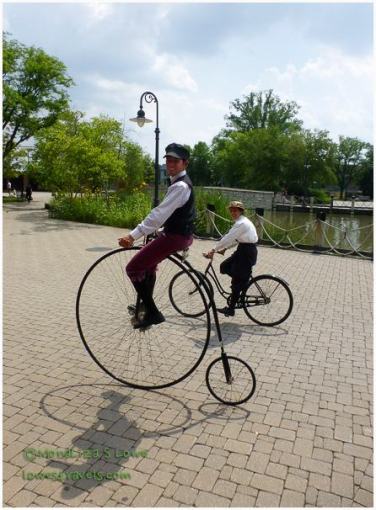 Not something you see every day…

A farmer threshing hay in a field 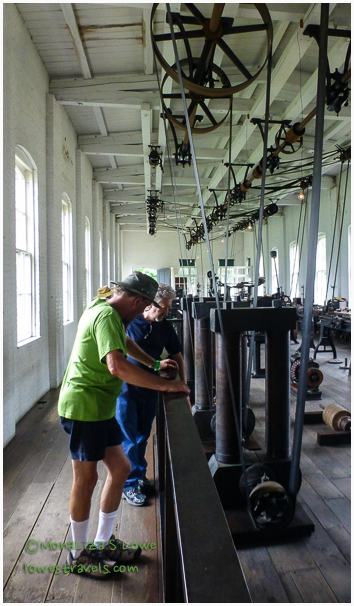 The girls take a spin on the 100 year old carousel

It was a long day of walking and touring through time with our friends, and what better way to end it than with a cold beverage at a local brewery!

Since our stay in Dearborn was all about Henry Ford, the four of us also swung by Fair Lane, Ford’s estate just up the road where he lived with his wife Clara from 1915 to 1950.  In 1957 Ford donated the estate and the farmlands to the University of Michigan for construction of the Dearborn campus.  In 1966 the estate received the prestigious designation as a National Historic Landmark from the National Register of Historic Places.  And in June 2013, ownership of the Estate transferred from the university to the Henry Ford Estate, Inc., a new 501c3 corporation that is currently performing an extensive restoration throughout the property.

Back view of the home

Although the historic home and buildings on the estate were closed for the work, we were able to explore the extensive grounds with the map they provided.

Our experience at the Henry Ford wouldn’t be complete without doing one of Steve’s favorite things – taking yet another factory tour – this time at the Ford Dearborn Truck Plant.  But we got more than just a view of the plant’s final assembly line.

First we were herded into a theater to learn about the history of the Ford Motor Company and Henry Ford’s innovations, including the concept of “vertical integration” where everything is produced at the plant, including the steel for the vehicles.  After that we were led to another theater surrounded by seven huge screens for a virtual tour of the complete assembly process.  It was a nicely done production that featured the Detroit Symphony Orchestra.

At the Legacy Galley, we saw the five vehicles that changed the Ford Motor Company and made automobile history: the 1929 Model A, the ’49 Coupe, the 1955 Thunderbird and a 1965 Mustang.  Completing the timeline was the Rouge’s latest creation from this plant, the new Ford F-150 Raptor pickup.

Finally, we began the self-guided walking tour of the assembly plant.  We were able to view the entire process from an elevated walkway, beginning where the painted F-150 shell entered the plant and ending at the trim line where final assembly took place.

Having been on several car assembly tours, we especially liked this one because we could take all the time we wanted to watch each process.  Along the walkway were several interactive kiosks and employees to answer our questions.

On the observation deck we got to see a panoramic view of the Ford Rouge Center complex, and check out what they are boasting about – the Living Roof atop the Dearborn Truck Plant’s Final Assembly building.  At 454,000 square feet, it is one of the largest living roofs in the world, effectively turning it into a 10.4-acre garden.

Whew!  You can probably sense there is much to see and do here, and we covered a lot of ground.  It was a fun place to visit with our friends to learn about Henry Ford and the legacy he left not just in Dearborn, but throughout the world.  He would have turned 150 years old this summer, and would likely be very proud of what history has said about him.