I know, I know, the title is a bit cheesy but what can I say, it was a wonderful experience being in southwestern Colorado during the last week of September.  With Betsy parked at Ridgway State Park (yes, Ridgway is spelled without the “e”) for a week, we covered a lot of ground during our stay, visiting the mountain towns of Telluride, Ouray, and Silverton, and driving the San Juan Skyway.  We also hiked to three alpine lakes and ate some great food, and all this while in the midst of jaw-dropping vistas, one after another.  My camera was busy the whole time, so be prepared for a rather long post!

Ridgway is nestled in picturesque Uncompahgre Valley, and is surrounded by the majestic peaks of the Cimarron and San Juan mountain ranges.  It’s when we arrived here that we realized the real size and beauty of the San Juans, for Ridgway is located at the northern entrance of the San Juan Scenic and Historic Byway, one of America’s most spectacular highways.

Once again we patronized the local produce stands, an activity we’ve really enjoyed during the past several weeks.  We also checked out the Dennis Weaver Memorial and scarfed down some excellent tacos at Tacos del Gnar.  When we saw a sign advertising ceviche (one of Steve’s favorites) at Land and Ocean Costa Rican Restaurant, we had to stop there as well, and I got to try their yummy Salmon and Red Snapper tacos.  These places were a bit pricey, but we could tell the ingredients were fresh and the long lines indicated that a lot of other folks agreed.

We will miss the farmers markets! 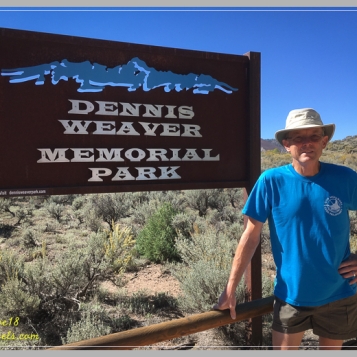 A nice little park outside of Ridgway 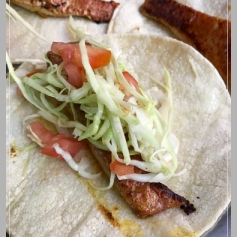 Our friends Hans and Lisa, and Kevin and Laura had hiked the Blue Lakes Trail, and we had a chance to follow in their “hikesteps”.  This trail began at 9,400′ and climbed into oxygen-thin terrain to a chain of three alpine lakes nestled in high basins near the flanks of Mt. Sneffels, Dallas Peak and Gilpin Peak.  Arriving at the lower lake at 10,890′, we were a bit winded and weren’t sure about continuing on to the upper lakes.  But we decided to press on at least part way, and ended up pushing each other to the beautiful upper lake at over 11,700′.  The path continued even higher, but we called it a day and were happy with our almost 10-mile hike.

Added bonuses to this hike were a waterfall, several gray jays, deer, marmots and panoramic views of the tall San Juan Mountain Range peaks.  Summer had ended so the lakes were low, but I can only imagine how pretty it would be here in springtime.

A waterfall along the way

This was a fairly strenuous hike with a gorgeous reward at the end, definitely worth the effort.  It was the longest we had spent on a trail (7 hours) and our biggest elevation gain (2,700′).  Definitely one of our best hikes this year! 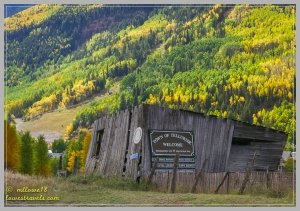 Steve booked us at a hotel in Telluride to celebrate our anniversary, and made our stay a memorable one.  The mountain town of Telluride had been on my bucket list for some time, so I was excited.  The resort town has a style of its own and is known for its mining history, Victorian architecture and most of all its spectacular scenery as high jagged peaks stand sentinel above.  There are so many outdoor activities here, and of course we had to check out the FREE gondola.

We strolled around town on our first day and had a tough time choosing from the many scrumptious dining options on Main Street.  We finally settled on  The Butcher and the Baker for a yummy Omelet and Kale salad. 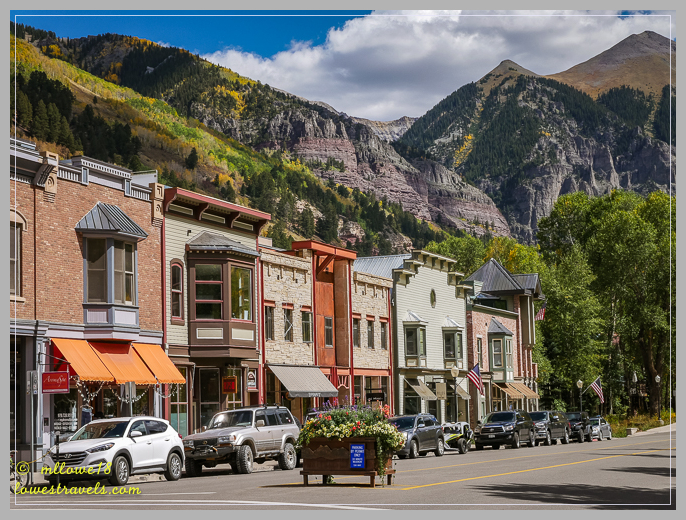 Telluride is named after telluride minerals that were never actually mined there.  It was originally founded as “Columbia” but was renamed so as not to be confused with another town in California with the same name.

Telluride’s backyard is exceptional, and there was beauty everywhere we looked.  Stands of Aspen trees along the ski slopes exploded into a patchwork of gold and yellow, with evergreens interspersed throughout.  And the mountains peaks were just gorgeous.

The only way to really see the surrounding landscape here is to hop on the multi-station gondola, and that’s what we did the next morning.  But instead of hiking up the strenuous 2.5-mile trail to the San Sophia station to ride back down, we did the opposite and I enjoyed taking photos of the area on the scenic walk back to town.

We rode the gondola all the way to the last station at Market Plaza station, then back to Mountain Village Center for a walk and a look around.  Finally, we rode back up to San Sophia Station at 10,540′ where we got off for our hike back to town via the Telluride Trail.  We thought it was the perfect way to celebrate an anniversary! 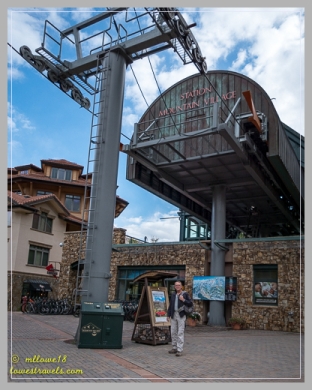 A couple of days was not nearly enough to explore this beautiful mountain town, but we enjoyed every moment of our short stay. 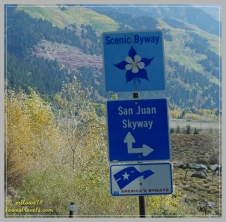 Just about every drive we took while in Colorado seemed like a scenic route, but one of the crowning jewels was definitely San Juan Skyway Scenic Drive.  This was the one that Steve really wanted me to enjoy as he did in 2015.  It’s a 236-mile loop that offers some of the best mountain views in the state.  We followed only part of it during this stop, since we knew our future destinations would include more of its beauty.

We began this segment from Ridgway, the gateway to the San Juans in the north on US 550.  Then we cruised through historic Ouray before turning around at picturesque Silverton.

Between Ouray and Silverton, the byway follows the historic “Million Dollar Highway”.  The utterly sheer and totally unprotected drop-offs can make southbound drivers a bit nervous and unable to completely enjoy the stunning scenery along the way. 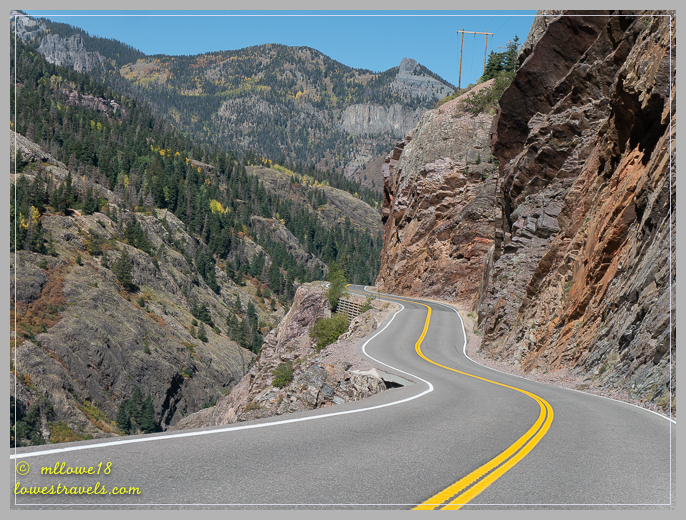 Of the 57 Colorado “14’ers” (mountains with peaks over 14,000′), 14 of them reside in the San Juan Mountain Range.  Driving here can make one feel very small, with so many towering mountains all around. 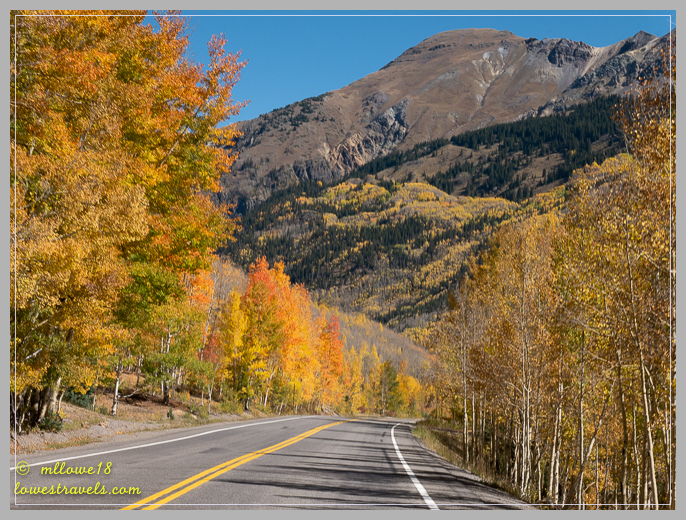 We wound through the iron-colored Red Mountain area, home to more than 100 historic mines that produced gold, silver, lead, zinc and copper in the 1870’s.  As a result, these mines generated tremendous waste rock and tailings that are a potential source of contamination.  The area is currently undergoing a major environmental remediation effort.

Several abandoned mines and deserted homesteads can be seen along the highway near Red Mountain Pass:

Steve was happy that the Colorado fall foliage in the San Juans delivered on his promise with a big bang.  “WOW” was a word I used often during the entire time we were here!  The hillsides were a kaleidoscope of colors and truly sensational.  And timing was everything, for a week after our drive the snow began falling.