We’d been hanging out in southwestern Colorado for several weeks, just so I could be awed by Colorado’s gold – the golden Aspen trees, that is.  This was Steve’s promise to me since I had missed this portion of our travels in 2015 due to a family emergency.  And I was excited that my first leaf peeping would be at Kebler Pass, a high mountain pass near Crested Butte at an elevation of about 10,000′.  It’s a seasonal mountain highway that connects Crested Butte with Paonia, and since I had heard good things about Crested Butte it only added to my anticipation.

We decided to take a full day to drive a loop from Montrose where we were camped to Crested Butte, over Kebler Pass to Paonia, then on through Hotchkiss and back to Montrose.  Knowing it would be a long day, we packed our snacks and water and left at sunrise.  Heading east, the sun was in our eyes from the start, but that didn’t hinder me from capturing some interesting features we saw along US50:

I was a bit apprehensive about our timing, because I’d read on the Forest Service website that the full fall foliage in this area was at least a week away.  But I kept my fingers crossed that we’d see lots of gold along the way, and as we approached Crested Butte I realized I wouldn’t be disappointed!

We arrived at Crested Butte, a little 1880s mining town, before its businesses started opening.  We strolled through all of the quaint streets of the downtown area, which didn’t take long.  Local businesses are housed in beautiful and vibrant late 1800’s era storefronts, making it a picturesque mountain community. We could see why these folks boast about the panoramic views of Mt. Crested Butte’s dramatic peaks that can be seen from anywhere in town. 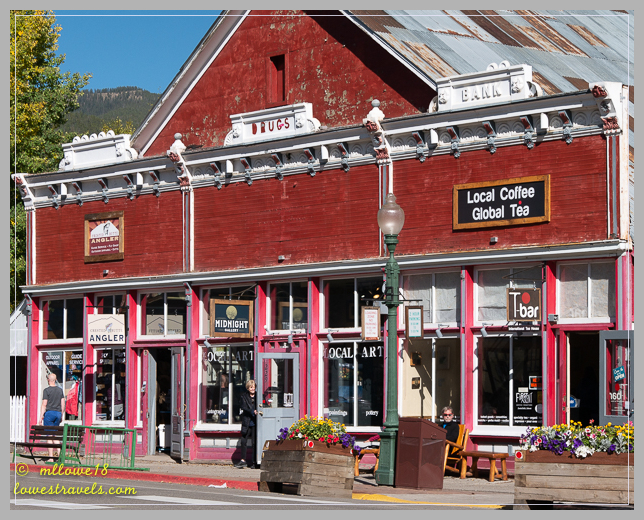 After walking and gawking around town for a while, we continued up to Kebler Pass, a 30-mile segment of gravel road on the West Elk Loop Scenic and Historic Byway.  It’s home to one of the largest Aspen groves in the world.  Even more mind-blowing is the fact that Aspen trees grow from a single root system and all of these trees are a single living organism named the Kebler Pass Aspen Grove. 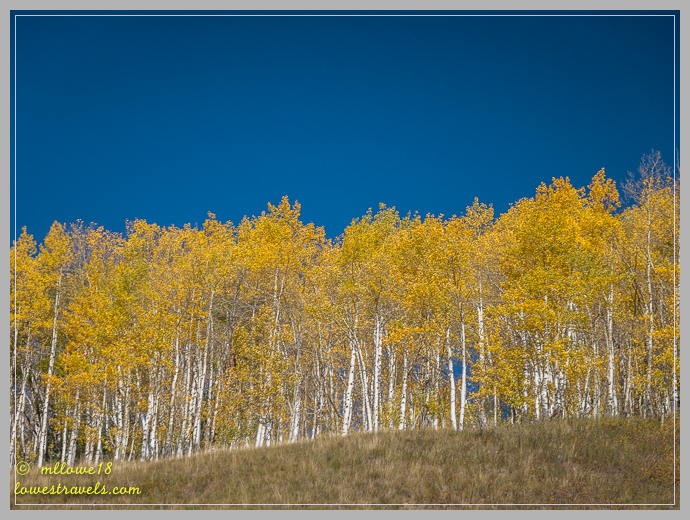 There was a section in the Pass where we were in the midst of giant, tall Aspen trees.  I wanted Steve to pull over, but there were a lot of crazy drivers, leaf peepers and photographers on the sometimes narrow gravel road.  And to think we were still a week away from the peak colors!  On this beautiful day the trees were spectacular all around the unique landscape:

To avoid the main leaf-peeping traffic, we turned onto an even narrower and steeper gravel road leading to our planned hike on Three Lakes Trail.  This hike featured (you guessed it) three lakes, great views of Ruby Range, and a spur trail to a small waterfall.  It was a short 3.7-mile moderate and scenic trek, with plenty of families and groups of friends enjoying it along with us.

We eventually escaped the busy area and continued over the pass into the friendly little town of Paonia, where we had a late lunch and were then inspired to taste some wines at a couple of nearby recommended wineries.  We were again surprised at how good Colorado red wines are, especially the Pinot Noir’s, which are my new favorite.

Our final stop was at a pig farm in the town of Hotchkiss, which Steve had arranged several weeks before.  Say what?  A pig farm?  Since we first tried pasture-fed pork with my relatives in Arkansas a few years ago, Steve has been on the lookout for the delicious pork which is difficult to find.  We’re still not sure why it’s so easy to find grass-fed beef, but not pasture-fed pork – maybe it’s just not so in demand?

Toby McPartland, “Lead Pig Wrangler” (his terminology), was happy to show us around his operation.  He was a super-nice guy and very knowledgeable.  We happily bought enough pork to last us several months.

If you get a chance to try pasture-fed pork, watch out – you won’t be satisfied with store-bought again!  If you enjoy a good pork chop now and then as we do, check out Colorado Pastured Pork if you’re in the area.  Although large “pork packages” are shown on the website, Toby was good enough to sell us just the cuts and amounts we wanted since we drove out to his farm.  Good stuff!

It was a long day of circuitous driving, but who can complain with such awe-inspiring scenery all around?  The Kebler Pass Aspen Grove may not have peaked quite yet, but it portends well for more of the state’s signature golden Aspen trees at our next stop!