Whispers of the Ancients – Dolores, CO

After a week in Ridgway we packed up and headed south.  Betsy chugged along Highway 145 over another section of San Juan Scenic Skyway.  And once again, driving here at this time of the year was well-timed for enjoying more of Colorado’s gold.  Steve had to focus on the road as we climbed Lizard Head Pass, but I was free to snap away at the vibrant autumn hues on the hillsides and mountain peaks.

Canyons of the Ancients 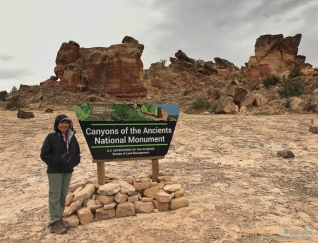 Southwest Colorado is part of the Four Corners area (Arizona, Utah, New Mexico, and Colorado) where the Anasazi or Ancestral Puebloan cultures thrived between AD 300 to 1300.  Within a broad expanse toward the north of that area, abundant relics left behind by the Anasazi have been discovered and excavated.  One of the three large protected areas of ruins and artifacts lies within the Canyons of the Ancients.  It’s home to a huge number of archaeological sites – more than 6,000 recorded so far – representing Ancestral Puebloan and other Native American cultures.  The other two protected areas are Mesa Verde National Park (which I visited later in the week) and relatively well-known Cedar Mesa (that we checked out previously while in Bluff, Utah). 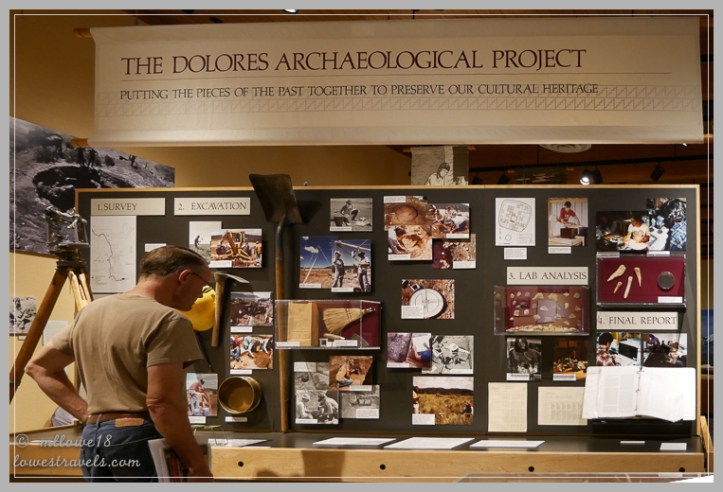 The best way to get our bearings and begin exploring in this wide expanse was to visit the Anasazi Heritage Center right up the road from our campground in Dolores.  While there we learned the history and methods archaeologists use to reveal the past and preserve artifacts from excavations in the Four Corners area.

The Canyons of the Ancients is not concentrated in one place, but rather crossed by several paved roads and a greater number of unpaved routes.  It’s easy to get lost and many of the sites are far apart, separated by wide open space.  We visited Lowry Pueblo first, originally constructed around AD 1060, and the only fully developed site in the national monument.  To our surprise the great house in the central section is protected by a metal canopy roof, which we though somewhat spoiled the overall appearance of the ruins.

We learned from the displays that Lowry Pueblo was built on top of an even older pithouse, as building techniques changed:

With a storm approaching, we drove to Sand Canyon Pueblo (22 miles from Anasazi Heritage Center), which was one of the largest settlements in the area.  We discovered the relic of the pueblo is now mostly a mound of rubble, and in some areas just low depressions or overgrown piles of stones.  Sometime between AD 1245 and 1290 there was a bustle of activity in the 14 towers, 100 kivas and over 400 rooms that existed here.

Several plaques along a short walking loop gave us a glimpse into the lives of the native people, from their shrines and towers to agricultural fields and sweat lodges.  After following the trail and reading the displays we were able to decipher what was what, and we tried to imagine what it would be like to live here nearly 800 years ago in a community positioned around a spiritual spring.  All excavated artifacts from the pueblo are curated at the BLM Anasazi Heritage Center that we had visited. 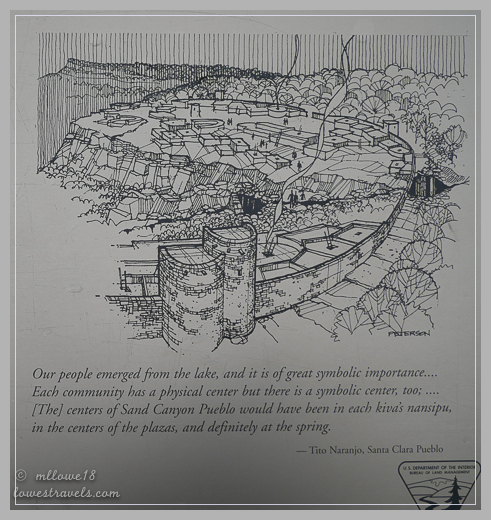 On the south side of Sand Canyon Pueblo, we followed Sand Canyon Trail which gave us access to an array of small ruins deserted by the Ancestral Puebloans centuries ago.  This was a moderate 6.5-mile trail that meandered through juniper and pinion pine forest and offered spur paths to viewpoints of the ruins.

These were not spectacular ruins by Mesa Verde standards, but seeing them along a regular hiking trail added a refreshing sense of discovery not found on paved national park trails.

House with a standing curved wall 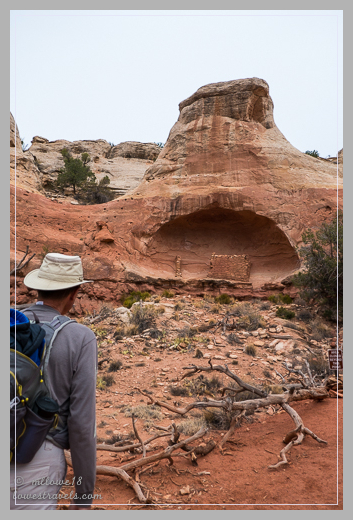 Meaning “green table” in Spanish, Mesa Verde offers the largest and most numerous collection of Anasazi ruins in the southwest.  This is the only national park that protects man-made structures as a spectacular reminder of the ancient culture that existed here.  The dwellings are remarkably preserved, allowing archaeologists to locate more than 4,800 sites (including 600 cliff dwellings) dating from about AD 550 to 1300.

Steve had already visited this park, so I enjoyed some “alone time” on my trip.  What he failed to mention was how huge it is, and just reaching the heart of it involved a slow and winding 21-mile drive that took an hour or so.  Had I known, I could have planned better for it takes time to visit Chapin and Wetherill mesas, especially if taking a ranger-guided tour of the three big cliff houses.  And of course I wanted to enjoy the spectacular panoramic views from the pull-offs along the way.  A few hours here simply wasn’t enough!

From the exhibits and displays at the visitor center, I gathered that around AD 750 the Ancestral Puebloans grouped their mesa-top dwellings in villages, many of which were moved into recesses in the cliffs.  For more than 700 years they and their descendants lived here, building elaborate stone communities in the sheltered alcoves of the canyon walls.

With the time I had, I drove around Chapin Mesa, the most visited section of the park.  Here were dozens of easily accessible cliff dwellings, ruins and other historic features, although the majority of the thousands of archaeological sites in the park have not been excavated.  At Cliff Canyon overlook, Fewkes Canyon intersects with Cliff Canyon and is believed to have been the center of a vibrant thriving community.  About ten cliff dwellings are identified for viewing, along with a few unrecognizable units.

Thanks to a program study that Mesa Verde National Park created and implemented, archaeologist were able to study 4,700 known archeological sites in the park and help preserve the legacy of the Ancestral Puebloans.  Through preservation, we are able to get a glimpse of the ancient people to learn how adept they were in building and skillful at living in a difficult land.  But as with many other ancient cultures of the southwest, the Mesa Verde area was abandoned quite suddenly around 1300 AD and it wasn’t until the late 19th century that their settlements were rediscovered.

I was amazed by the first village and how the pit house from 850 BC was preserved:

The campground where we stayed in Dolores lived up to its name, The Views Campground.  Our backyard at site #45 was a wide expanse, with views of Mesa Verde, Sleeping Ute Mountain, Shiprock Mountain in New Mexico and the Chuska Mountains in Arizona:

Our week stay in Dolores was capped by meeting our dear friends John and Pam.  Thanks to the impending bad weather descending on southwestern Colorado, they had altered their route and we were able to meet up for dinner.  Having a sticks and bricks house now, they’re free to say “to heck with the weather, let’s go home where it’s dry and warm.”  We’re happy to have a standing invite to their home in Boulder City, Nevada! See you there soon!