Betsy goes to the hospital and we go to Halifax, NS

After many enjoyable experiences it was time to leave picturesque Prince Edward Island – for a price!  The outrageous bridge toll is paid when leaving the island, and after paying this one we’ll never again complain about how high the tolls were on California bridges! 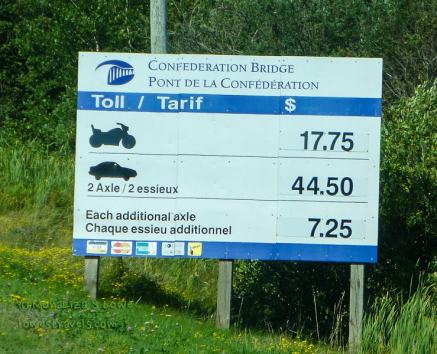 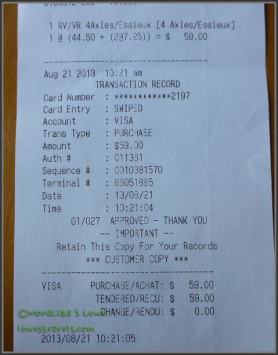 This was one of our longer drives, from PEI to Halifax, Nova Scotia.  Once again, colorful and vibrant signs welcomed us to the Nova Scotia province. 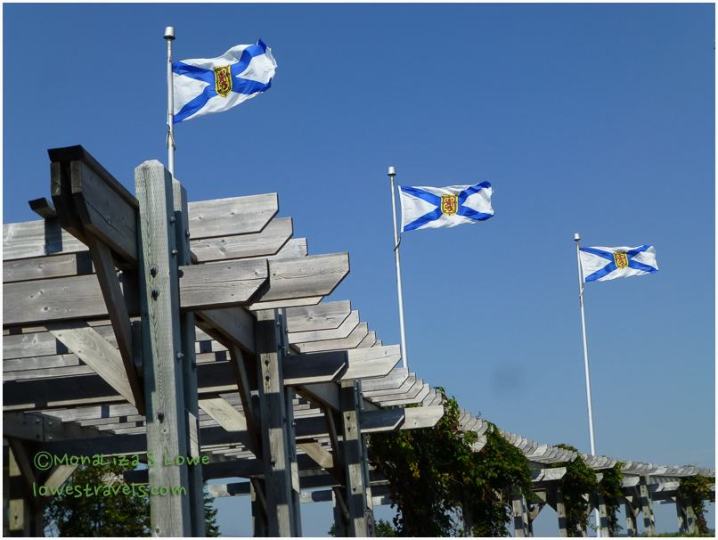 But as we were approaching our campground along a narrow road, we heard a loud hissing noise.  Steve checked all the monitors and nothing was warning us of a problem. The noise was very loud when we were accelerating, on a road with hills on each side and it was easy to hear because of the echo.  Since we were only a couple of miles from the campground and there was really nowhere to  pull over anyway, we proceeded.  At the campground, Steve checked out the engine as best he could with me revving it but could not locate the source.  While checking into our site, the park manager advised us there was a Cummins engine shop only 11 miles away.  Wow, were we happy to hear that!  We made an appointment and showed up bright and early in the morning, limping along the side streets to stay off the throttle as much as possible.

While Betsy was being diagnosed and hopefully repaired, we went to the vibrant capital city of Nova Scotia by the sea, Halifax.  Not knowing how long we had to hang out there, we concentrated our activities to the harbor area.  To me, Halifax seemed to be only in the movies or a setting of a good mystery book.  Yet here we were about to experience it!  We thought the city seemed like a mini San Francisco, but with far fewer people and much cleaner.  Besides, they painted their bridge with my favorite colors – green and yellow!

Let me entertain you with the waterfront photos I took while we waited to hear the prognosis for Betsy:

The 3 unique sculptures below are called “The Way Things Are”, and are on public display until Sept 21.  In the foreground is “Got Drunk, Fell Down” (the lamp that has fallen down and its friend is looking down on it with some concern), and in the background is “Fountain” (the lamp post that looks like it is relieving itself into the harbor).  The display was created by Chris Hanson and Hendrika Sonnenberg.

We learned a bit of history as we read the inscriptions on the monument about how the Acadians were removed from Nova Scotia and imprisoned on Georges Island just across the harbor.  This period in 1755 of systematic deportaton of Acadians was called the Grand Derangement or Great Upheaval. Click each image for a brief history about Georges Island. 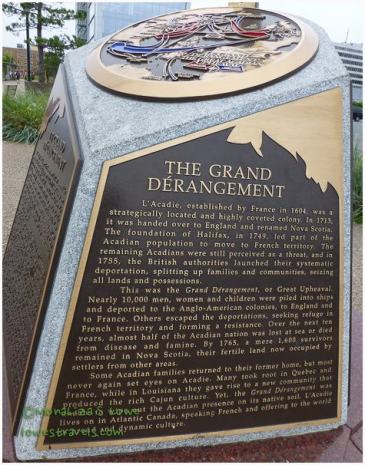 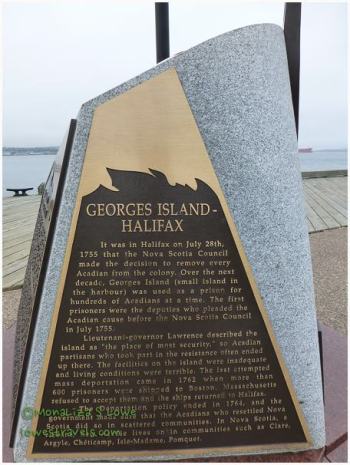 Across the harbor is Georges Island, where the Acadians were imprisoned.  Imagine thousands of people imprisoned on this tiny island!

And we certainly don’t get to see this everyday, a cargo ship carrying gigantic cranes into the harbor! 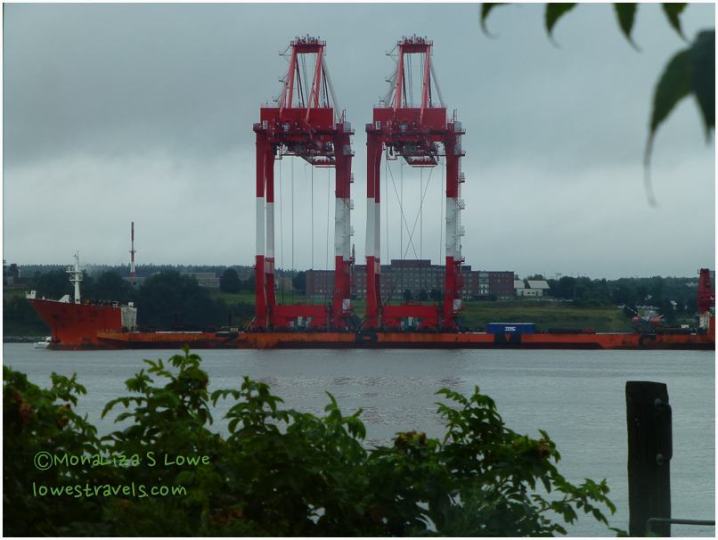 Giant new cranes being shipped in

Other sights on the waterfront. 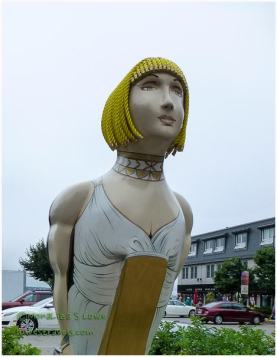 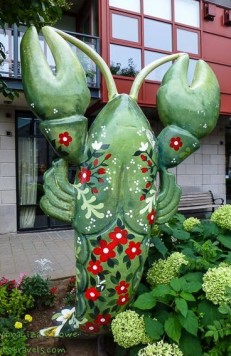 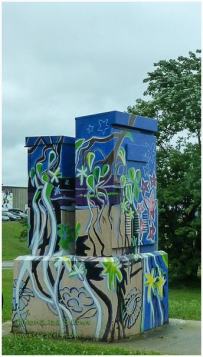 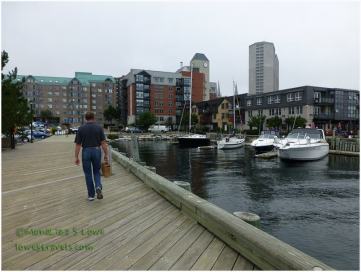 Shopping at the waterfront 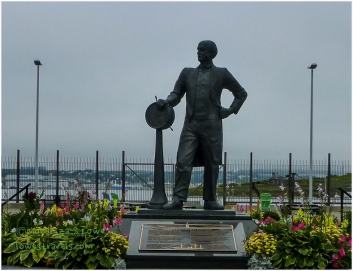 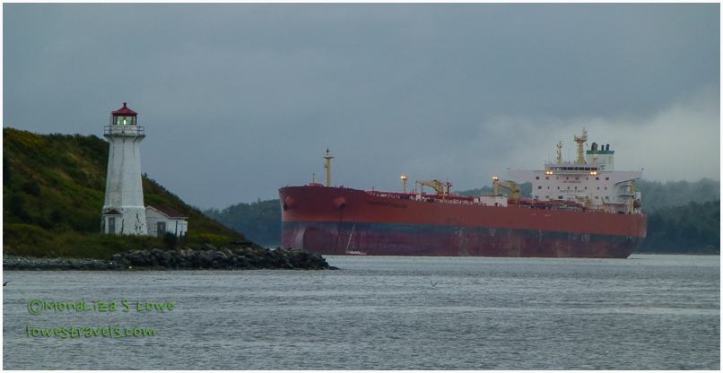 I managed to take a panoramic shot of the waterfront just before a tremendous downpour came through the area.

Since it is a big city harbor, all kinds of ships/boats/schooners/yachts were docked, and even the Maine Maritime Academy was in town. 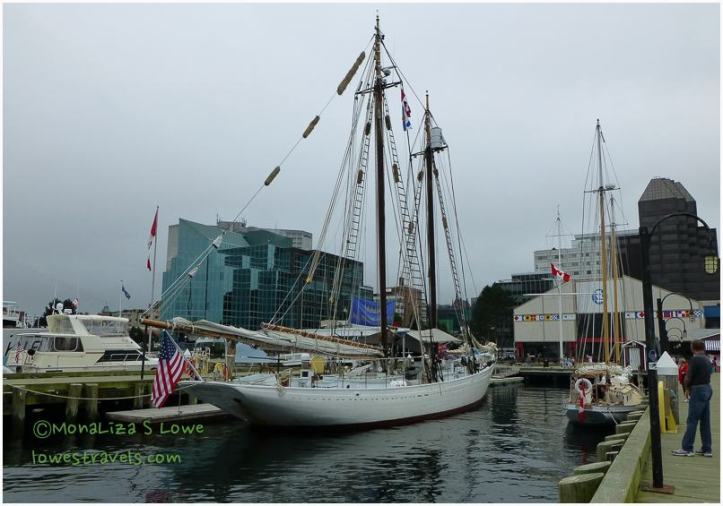 Then the rain came, and it poured for half an hour. 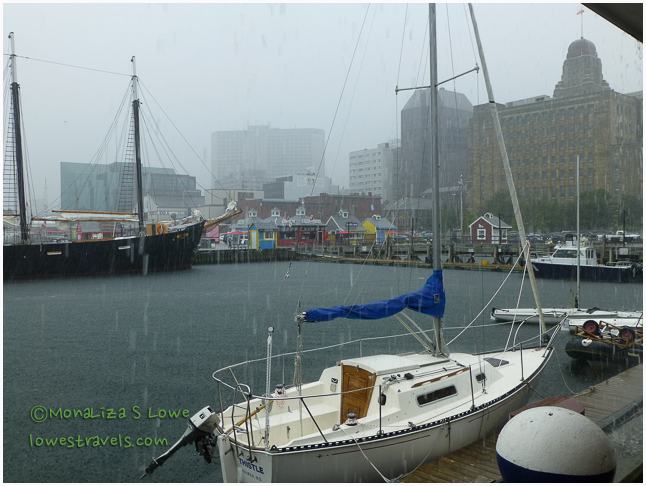 After four hours we got the call – Betsy was fixed and can be taken home!  We paid for what seemed to be the world’s most expensive hose – $426!  95% of that was labor, of course, and our extended warranty doesn’t cover hoses, of course.  The hose was for the inlet to the air compressor, which compresses air for the brakes and suspension air bags.  It had split wide open, and although noisy, no damage was done.  We were happy to get Betsy back – being homeless even for a few hours is nerve-wracking especially when you are in a foreign country!

We headed back to the campground to get her set up again.  We stayed at Woodhaven RV Park, and they offer a most unique and yummy service – fresh cooked lobster prepared for their customers at only $7.00 per pound.  You better believe we took advantage of that offer, and it was fantastic!  If interested, you can read Steve’s review of the campground here. At the end of the day we shared our repair story and Halifax sightseeing with our next door neighbors, Ron and Louise.  They are full timers from Florida, and we hope to see them again this winter when we are there. 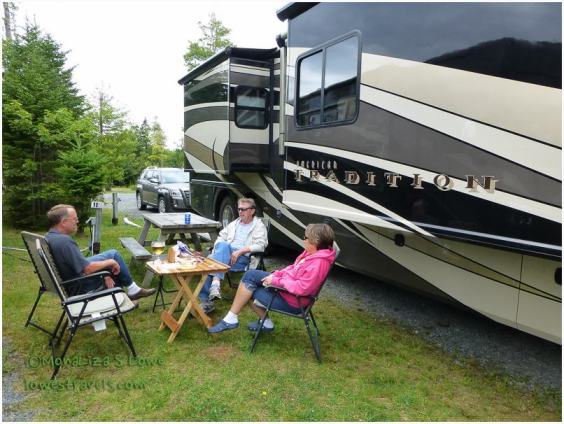