Wrapping up our three-week sojourn in Kansas

As of this writing we have already departed Kansas.  I got behind on my blogging, because for the first time we used up our monthly data allocation on our Verizon plan.  I’ve been surviving on campground WiFi service, but that’s what I get for downloading a huge Mac OS upgrade and eating up all of our data!

We are on our last stretch out of Kansas, inching toward the northeast corner of the state and making our final stop at Sabetha.  As if to remind us again that Kansas is not all flat, our GPS, “Randy”, took the fastest route to our campground and we darn near got stuck in the mud on a hilly dirt road that had been rained on the night before.  What was Randy thinking?  With no traffic in either direction we unhooked the car so I could search for our campground while Steve recovered from the experience of sliding sideways down a hill in a 17-ton motorhome.

Hey, that road doesn’t look too bad, does it? Wrong!

Fortunately the campground was only a mile away, and the owner had spotted us and came over to escort us to our spot.  Steve was very skeptical when the owner guided us into our site, but he drove in and Betsy immediately sank into the mud!  Well, with the rear tires sunk 3 inches we were perfectly level, so we put out the slides and decided to worry about it later.  We were actually laughing about the whole thing, and Steve came up with:

You might be in Kansas if…your campground host says, “Hey, looks like you’re stuck there, I’ll go fetch a tractor and pull you out.”

And that’s exactly what he did when we left 3 days later, as you’ll see below.

The campground turned out to be quiet and beautiful, but a bit crowded over the weekend (Steve’s review is here).  It’s certainly one we’ll remember! 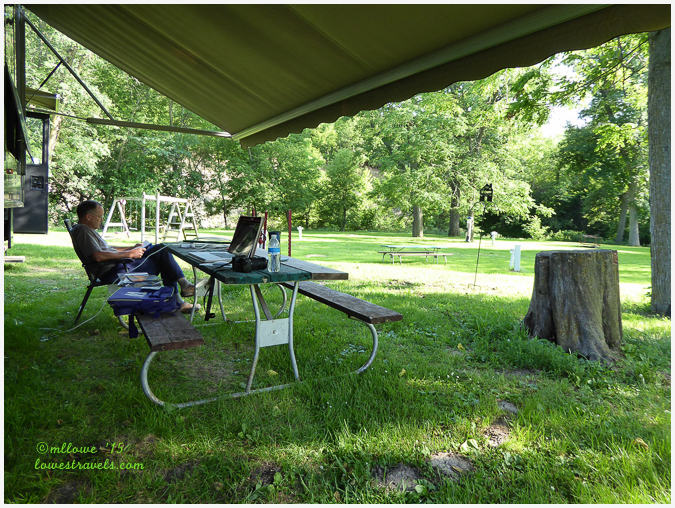 Better times as the sun comes out and the ground dries

We ventured out of the campground and walked up a dirt road to see if there was anything interesting around.  Steve stopped on a bridge and was excited to see a beaver swimming along Pony creek. 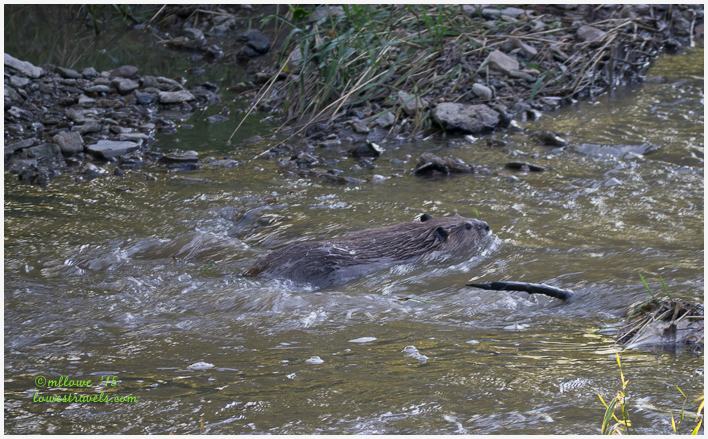 On the way up the hill, we spotted a lone deer walking on the road:

The top of the hill rewarded us with a vista of rolling countryside covered with cornfields and occasional dense forest. 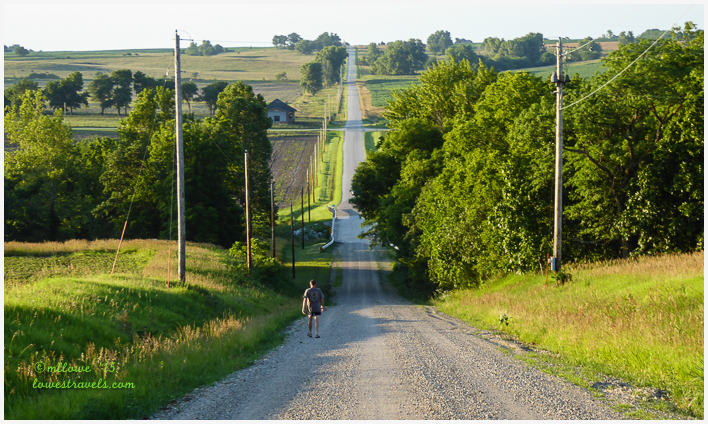 The campground is behind those trees to the right

When Steve left me behind, this beautiful Scissor-tailed Flycatcher flew up and perched on a wire.  It just made my day – this bird has been on my watch list since Dauphin Island in Alabama! 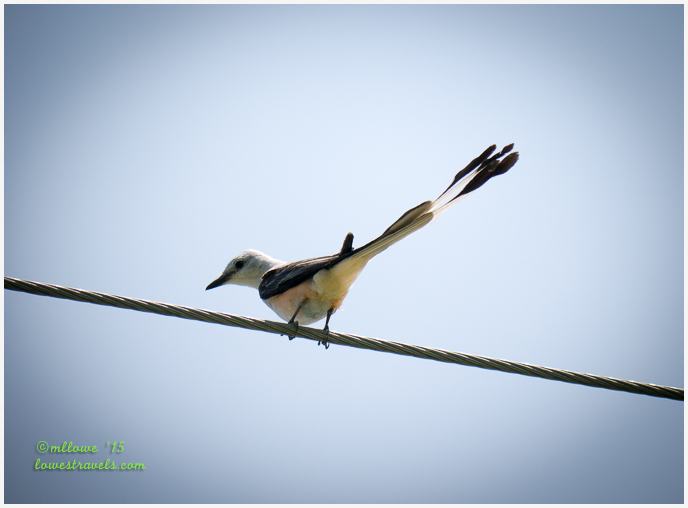 Check out that long forked black and white tail!

Back at the campground we enjoyed a non-stop symphony of birds singing and male cicadas serenading the females.  Their buzzing and clicking noises, amplified by the thousands, turned into an overpowering hum.  It got me curious, so I went searching for them in the grasses. 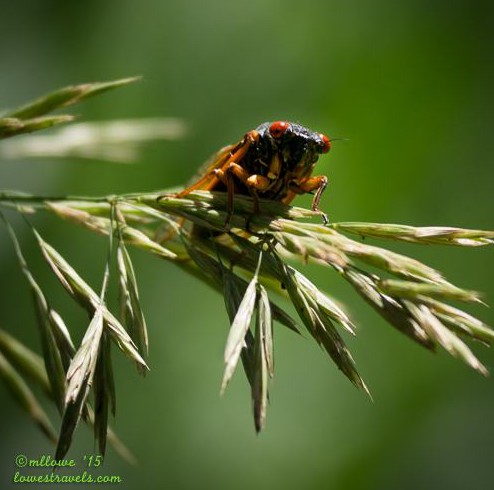 Cicada checking me out

When we weren’t exploring we just sat outside amidst the humming of the cicadas.  It was during these moments that we looked back and contemplated all of our experiences here in Kansas.  We felt fortunate to have seen parts of the state that many travelers never do.  We’ve met friendly people here, visited inspiring natural hidden treasures and experienced historical and educational places.

The state has a sampler of things to do, called the 8 Wonders of Kansas.  It’s meant to help the world get to know the state and to encourage the public to explore it.  We were happy to learn that we had experienced 3 of the 8 wonders, and if you missed our posts they are the Monument Rocks, the Underground Salt Museum, and the Tallgrass Prairie National Preserve.

Some other wonders of Kansas are architectural and art related; we admired the architecture of the Chase County Courthouse, and the Keeper of the Plains statue in Wichita.  We also enjoyed the John Steuart Curry Murals at the state capitol.  He was a famous Kansas artist whose depiction of abolitionist John Brown was seen as too fierce, as he depicted him holding a bible in one hand and a gun in the other. 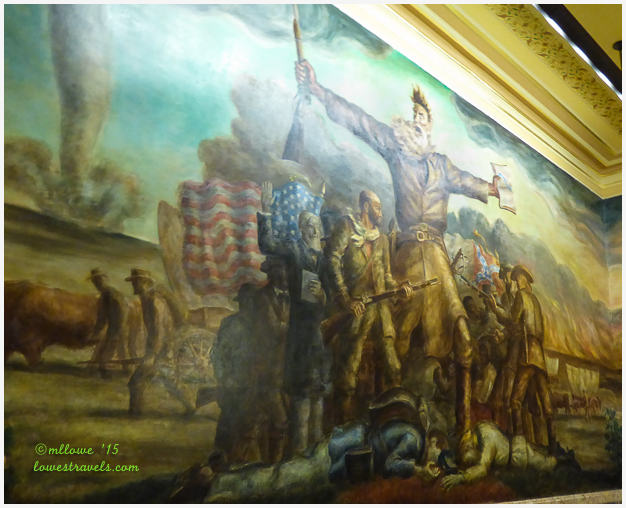 The Keeper of the Plains sculpture in Wichita  honors the region’s original citizens and has become a symbol of Wichita. 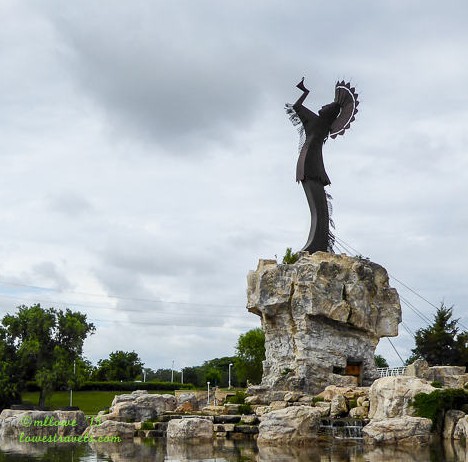 Keeper of the Plains – Wichita

The five-ton sculpture was placed at the confluence of the Little and Big Arkansas Rivers, which is considered a sacred site by Native Americans and was home to the Wichita tribe for many years.

There were other uncommon structures that we saw along the byways:

1/2 mile long, this grain elevator is the second largest in the world – Hutchinson

We still can’t believe we spent three weeks exploring Kansas.  And it sure helped that we didn’t hear a single tornado warning siren!  We won’t complain about the heat and humidity, it’s just a fact of life here.  Our initial plan of making 2 stops morphed into 6 great discovery stops.  So, next time you’re traveling through Kansas, get off that featureless interstate and discover the unexpected pleasures of the state!

Divided regions of Kansas, according to physical geology.  Our stops are marked by the yellow stars

OK, back to our drama of leaving the park.  Even after 3 days of sunshine, Betsy was just too deeply rutted to get out by herself.  True to his his word, the owner got one of his tractors and made quick work of pulling us back onto terra firma. 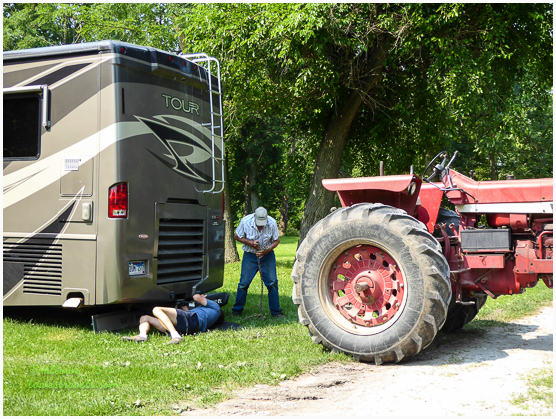 We’re used to getting helped into our site, but this was the first time we had help getting out!

This tractor had no problem pulling us out

We noticed a lot of very noisy pickup trucks while in Kansas, so Steve wanted to share one other observation:

You might be in Kansas if…the luxury model pickups are the ones that come with an exhaust system!

…and off we went to continue the adventure!

Up next:  Heading into the Cornhusker State!

Categories: Kansas, Where we have been