By the time you read this I’ll be 8,000 miles away visiting family in the Philippines again. Our time at Colorado Springs consisted mostly of completing details of my family reunion activities, packing, exploring the area and getting this post finished before leaving.

Because of this trip I must temporarily pause my blogging activities.  We have selected a few of the most popular postings about our 2012 Alaskan Adventures, and Steve will re-publish them during my absence.

But now – about Colorado Springs, our second stop in this beautiful state.  It sits at the foot of a famous American landmark, Pike’s Peak.  And because of its location the city is a popular tourism destination that we wanted to enjoy to the fullest.

There’s an endless list of things to do and places to see in and around Colorado Springs. Since this was my friend Ingrid’s old stomping grounds, we picked her brain for some must see and do activities, given our somewhat limited time.  Then we hit the road and experienced as many of those fun things as we could.

Driving into the Colorado Springs area, The towering mountains around the city welcomed us.  Pike’s Peak is one of Colorado’s 53 fourteeners, mountains that rise more than 14,000 feet above sea level.

Designated as a National Historic Landmark, the mountain rises 8,000 ft. above downtown Colorado Springs.  At 14,115 ft., the summit can be tackled three different ways – a 13-mile hike up the Barr Trail, a 28-mile drive up Pike’s Peak Highway or a ride up the mountain aboard the Pike’s Peak Cog Railway.  Given the snowstorm that occurred the previous day, we opted for the easy option and took the railway. 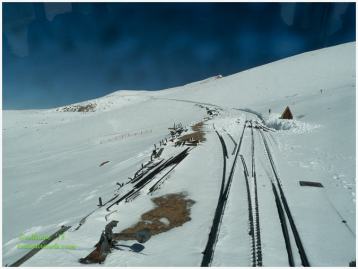 The snow plow just went through this section

The full 8.9-mile ride to the summit and back takes about three hours.  We passed an area called Inspiration Point where Katherine Lee Bates, upon seeing the beauty of Pike’s Peak in 1893, wrote a poem that later became the song known as “America the Beautiful.”

Unfortunately, the recent storm had made the tracks impassible above 12,130 ft., so we headed back down from that elevation.  We had wanted to go to the summit, but Mother Nature wasn’t cooperating and we settled for frolicking in the snow at the 10,000 ft. platform stop.

This is as high as we went 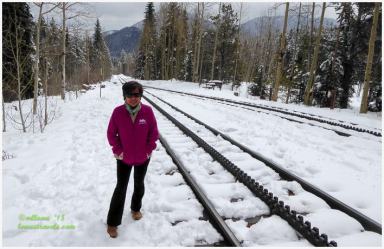 Enjoying our rest stop in the white stuff

Garden of the Gods

It was a rainy day when we visited the Garden of the Gods, which was good in a way as we had the park almost to ourselves.  Access to this 1,364-acre city  park is free, and we heard that it can get very busy.  We learned from a short video at the Visitor’s Center that this natural treasure was gifted to the city by the children of Charles Elliot Perkins in 1909.  The only stipulation was that the public be able to enjoy it for free.

Before this was called the Garden of the Gods, it was known as Red Rock Corral.  But two surveyors with lots of imagination expressed other suggestions in 1859.  One of them suggested the area would be a “capital place for a beer garden“.  The other, awestruck by the impressive rock formations, exclaimed, “Beer Garden!  Why it is a fit place for the gods to assemble.  We will call it the Garden of the Gods.”  The name stuck.

The garden has quite a collection of 300-foot towering sandstone formations.  There were some hiking trails, but they were muddy due to the rains and the weather was not getting any better.  We took along our trusty umbrella so we could get some pictures of the various geologic features – many boulders toppled, overturned, pushed around or slanted upward out of the ground.

A futile attempt to topple the balanced rock

Outside the park, there was further evidence of geologic upheavals, tectonic activity and erosion spanning millions of years and shaping the Colorado Springs area.

After spending a morning looking at all of those marvelous rocks, we took a break for lunch.  French onion soup isn’t our usual lunch fare, but La Baguette had an excellent one for a cold day.  It always pays to listen to our friends’ recommendations, and we were glad that Ingrid had suggested we check out this place.  Yum!

Formerly known as the Grand Canyon of the Arkansas River, the Royal Gorge is a huge canyon near Cañon City, Colorado.  It is only 50 ft. across at some parts of the base and well over 1,200 ft. across at its top.  Ten miles long, it’s also about 1,200 ft. deep and runs through the granite of Fremont Peak.

Hanging 955 feet above the Arkansas River, the Royal Gorge Bridge is the highest in the U.S.  Steve had seen a story about it in a Motorhome magazine and made a note to check it out.  Our stop in Colorado Springs put us only about 45 minutes away, and we’re very glad we made the drive.

We learned that the bridge was not constructed for transportation uses; it was purpose-built to be a tourist attraction, and since its completion has remained one of the most-visited places in Colorado.  The bridge deck is 1,260 ft. long and 18 ft. wide, with a wooden walkway consisting of 1,292 planks.

Riding the aerial gondolas was exciting, as we glided 2,300 ft. across the gorge.  Then we watched the story of the gorge at the Plaza Theater, learning about the construction of the bridge and park, and the rebuilding that took place after a devastating fire destroyed much of it in 2013.

Gondola car destroyed in the fire

A little person on a big bridge 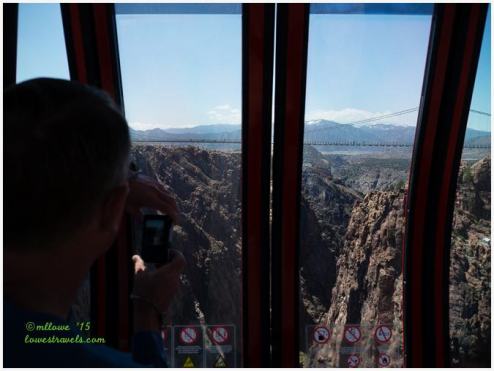 Once Steve spotted the zip line that ran across the gorge, he just couldn’t stop looking at it.  Well, he finally gave in to his excitement late in the afternoon, riding the gondola across the gorge to the zip line tower and then “zipping” back to the Visitor’s Center.  We did a zip line once before in a forest, but this place takes it to a whole new level!

What a week it was!  Our adventures so far in Colorado have exceeded our expectations and we’re having a blast.  I’m kind of dreading flying to a faraway hot and humid country for several weeks!

So we had to say goodbye to Pike’s Peak, as we headed up to Denver.  Steve will hang out there and take care of several maintenance items as he awaits my return later in the month.