Our drive on FM285 from Pecos, Texas to Carlsbad, New Mexico was the worst stretch of road we’ve ever driven, including even the worst that Alaska and Canada had to offer.  We urge folks with RV’s to avoid this filthy, dusty and dangerous road with no place to pull over.  Truck traffic is extremely heavy, and there are no attempts to repair the massive potholes – some stretching all the way across the road cannot be avoided.  We ran through one of them, and even though we had slowed down considerably we incurred irreparable damage to the tow bar receiver that held our bikes on their rack.

Once at our campground, Steve examined the damage and added up the costs for a new receiver and to get our under-maintained and underused  bikes repaired.  With a heavy heart I agreed that we would scrap the receiver and donate the bikes to Goodwill.  We may get new ones at some point, perhaps after we settle down a bit when our current journey ends 😦

It was a sad day for me. The only positive thing that came out of our stop in Pecos, TX was that I was pronounced A-OK by my doctor there, who happened to be from the Philippines. And I couldn’t help but smile when this cute little Scaled Quail trotted along next to our rig and posed for me.  Otherwise, we found Pecos to be a dusty and depressing little oil town that we were happy to leave after a single night at a noisy and dirty RV park.

Our spirits rose at our first stop in New Mexico, at Carlsbad.  Like most other folks traveling through, our main goal was to explore the Carlsbad Caverns.  We had missed them the last time we were in the area in February 2013, due to dangerous winds on the pass that we would have had to drive over from Alamogordo to the caverns.

Those of you who have been following us since 2012 know that we love to explore natural underground wonders.  For new readers who are interested in our previous cave adventures, check out the links below.  Caves and caverns usually share some common features, yet each of them has their own unique formations.  Here are the caves and caverns we explored while in these areas:

Carlsbad Caverns in the Chihuahuan Desert are one of the largest, deepest and most decorated caverns in the world.  There are about 118 caves with over 180 total miles of known passages and rooms.  There were eight tours available when we were there, and we chose three; the Natural Entrance 1.25 mi. self-guided route, the Big Room 1.25 mi. self-guided route and the one-mile King’s Palace guided tour.

At the mouth of the natural opening is the Bat Amphitheater, where an outflight of a large colony of Brazilian Free-tailed bats can be observed in the evenings during the months of May-October.  Steve loves watching bats and is already thinking of coming back here just to see these spectacular outflights.

But before we could even go inside, a Park Ranger thoroughly cleaned our shoes.  We had visited other caves in the east where the White Nose Syndrome has killed millions of bats. Even though we weren’t sure whether we had worn these shoes in any of those caves, we didn’t want to take any chances.  Plus, we had a nice chat with the ranger and our shoes looked fantastic when he was done!

Finally, we were off to the huge cavern opening.

The natural entrance route is a paved downhill hike of about 800 ft. for 1.25 miles in semi-darkness.  But in 1898, Jim White entered this cave for the first time using a ladder of sticks and wire, and I thanked him for paving the way for us to see the splendor below.

Along the way were several plaques describing things around us, but what really caught our attention was a huge boulder in the center of the descending walkway.  It turned out to be a 200,000-ton iceberg rock that fell down from the cave wall.  We walked around it and tried to imagine how it would have sounded and felt when this colossus broke loose.  Since I could not capture its enormity, here’s a snapshot of the plaque about it:

At the end of this strenuous route and at 800 ft. below the surface, we had our first experience of seeing an underground rest area/restrooms/cafe and gift shop.  That’s how huge it is here.  It’s also where the elevator stops for those in wheelchairs or who don’t want to make the hike down.

We took a break and waited for our next tour, which was the guided King’s Palace tour.

Imagine yourself in an ornately decorated King’s palace, or a Queen’s bedroom.  Those are the names given to two of the huge caverns we saw during this one-mile walk.  A total of four naturally-decorated chambers with a fabulous variety of cave decorations unfolded before us.

From this tour we learned about the history of the caverns, and it really made us think about and appreciate more the wonders of the cavern and its past.  We were given plenty of time to snap pictures, but of the many I took in the darkness of this tour, only a couple came out good enough to share.  One of them is of an ancient bat, entombed in calcite on the floor of the cavern:

After taking another break we tackled the enormous Big Room.  Now this chamber is really something, and the incredible variety of formations we saw here blew our minds.  The chamber is really a massive natural limestone cave chamber which is larger than six football fields and could house the Notre Dame Cathedral.  Pause for a moment and imagine that!

The walk around this chamber is about 1.25 miles long and could take hours for someone marveling at the unending collection of dramatic and gigantic cave formations. Stalactites, stalagmites, draperies, and columns were just a few of the wonders we saw.  It’s so much bigger and unlike anything else we’ve seen that the whole experience seemed quite surreal.

Again, due to the low lighting I managed to capture only a few of the many amazing formations on this tour, some with the help of other visitors who had brought spotlights with them.

The wonders we saw underground at Carlsbad Caverns can not be captured in photos, you have to go there and experience it yourself.  Because of its high ceilings, I think claustrophobia would not be an issue for most folks, and the path and formations were backlighted beautifully to lead the way.

These are the “baddest” caverns we’ve seen in the U.S., and we highly recommend them to anyone traveling in the area.

On another day, we drove to nearby Brantley Lake State Park to do even more hiking.  We followed a trail from the Visitor’s Center to the park’s campground, an easy 3-mile round-trip trek. 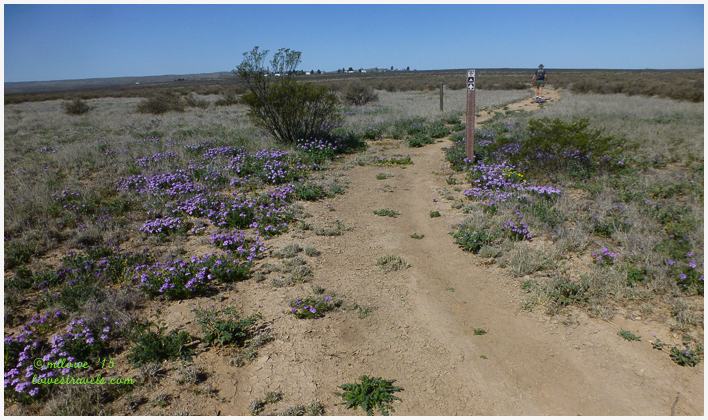 As you can see, I couldn’t stop myself from touching the tiny and beautiful wildflowers along the route 🙂

On our final night here at the Carlsbad KOA, (Steve’s review here) the moon was full and I thought the windmill in the foreground was a nice feature to add: