And then there’s Key West…

At the very end of the Florida Keys, the last island on the Overseas Highway (US 1) is of course Key West.  It sits at the dividing line between the Atlantic Ocean and the Gulf of Mexico, and is surrounded by incredibly clear beautiful water.  As usual, a question crossed my mind as I wondered why is this island called Key West?  Why not Key South? There are lots of theories, but the plaque below that we saw upon our arrival explained it one way: 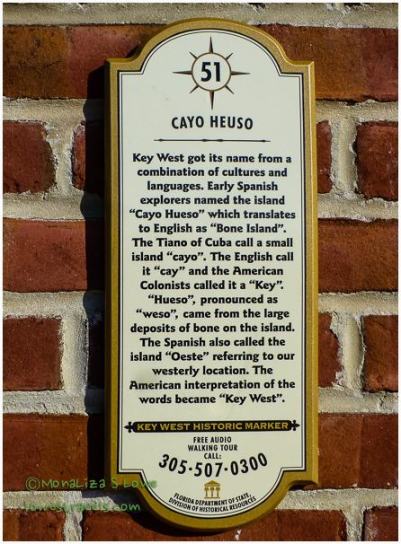 It was about a one-hour drive to Key West from our home base near Big Pine Key. Arriving fairly early, we immediately noticed the island was a tourist mecca buzzing with activity – not to mention heavy traffic – as we skirted around several road construction projects.  The streets were teeming with bicycles, scooters, cars and the obvious tourists. We learned during our previous visits to cities like Savannah and Charleston that taking a trolley tour is a good way to get your bearings around town, see the city highlights and learn along the way.  And so that’s what we did. 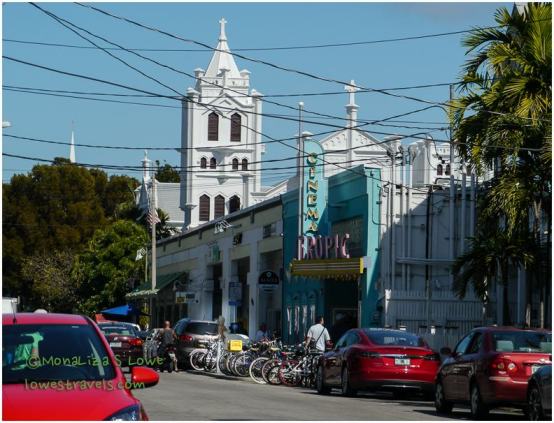 During our 90-minute tour, we learned that Key West has known the best of times – being the richest city per capita in the mid 1800’s – mainly due to the business of salvaging ships that had crashed onto the nearby reef.  It’s also seen the worst of times, declaring bankruptcy in the 1930’s after the modernization of merchant vessels made salvaging operations no longer necessary.

Bisecting the town is Duval Street, called the “longest main street” because it stretches from coast to coast – from the Atlantic ocean to the Gulf of Mexico 🙂  But here it is known more as party central, with its numerous and diverse bars, clubs and restaurants. However, it was still fairly early when we arrived so things hadn’t kicked into gear yet. 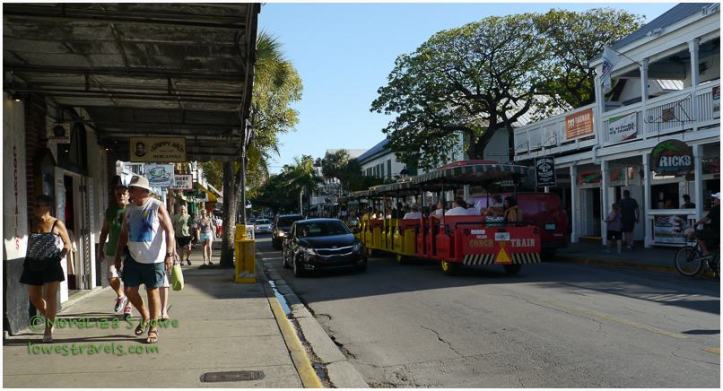 We hopped off the trolley to explore the area on foot.  This is when I started to look beyond the usual tourist trap stores selling T-shirts, trinkets and other stuff (not that there’s anything wrong with that) that I noticed whimsical sculptures scattered around town; Banyan and other exotic trees decorated streets and homes, and feral chickens roamed all around the island. 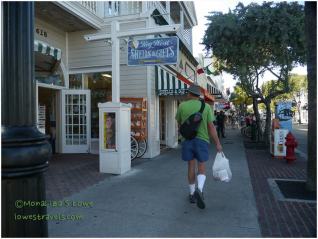 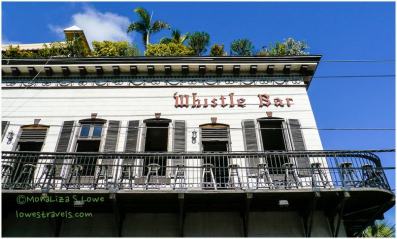 First, the sculpture pieces are life-size bronze statues, which are actually castings of living people, depicting them engaged in day-to-day activities.  These were all donated by J. Seward Johnson, and many of his works grace the Key West Lighthouse Museum grounds and other places on the island.

Strolling around Key West, you can’t help but notice the chickens and roosters roaming everywhere.  I come from the Philippines, where chickens roaming around like this would be on the dinner table by sunset.  But not at Key West.  These guys are a popular, colorful sight around town, free to come and go as they please – and they are protected by law.  And yes, they seem to know it, strutting around everywhere while preening and annoying folks with the “little gifts” they leave behind.

The trolley tour guide told us the chickens were brought here by the Cubans when they fled their country in the 1950’s, as a result of the Revolution.  What we see today are the descendants of the birds that were turned loose in the 1970’s when cockfighting was outlawed.  Now they are here for the tourists to enjoy.

Coconut and palm trees definitely bring a tropical vibe to the island.  Added to that mix are exotic mature trees dotting the area and adorning homes.  These trees help create a natural setting to homes and the island.  The building height restriction of 7 floors also keeps the town a bit more quaint. 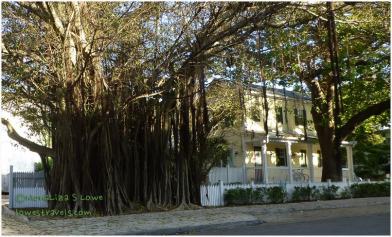 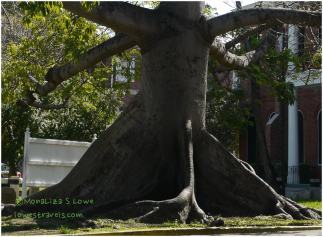 And just like the other tourists, we walked down to the end of Whitehead street to pose at a landmark.  It looked like a giant buoy, but according to our tour guide it is actually a septic tank!  Phew!  But this colorful septic tank or giant buoy marks the southernmost point of the US.  It’s nothing fancy, yet many folks lined up for a picture with it and so did we.  We came across another landmark, “Mile 0” at the beginning of US 1 which runs along the east coast and ends all the way up in Maine.  I thought it was a cool landmark, so I posed again! 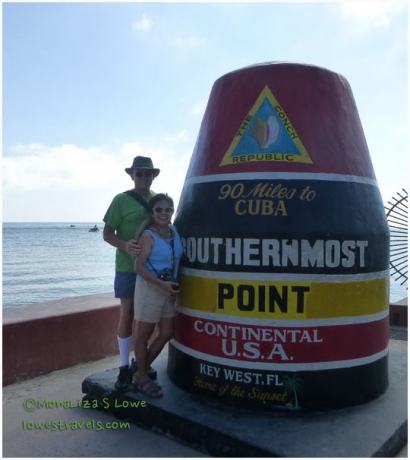 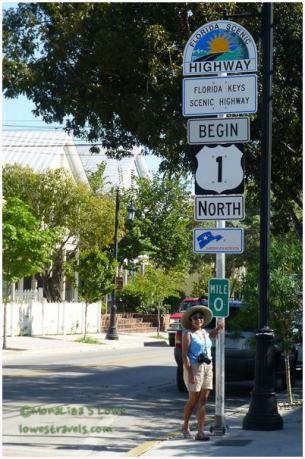 When our tummies told us it was time for lunch, we skipped the seafood this time and went to El Meson de Pepe, a family-owned and operated authentic Cuban Restaurant. And we weren’t disappointed.  Steve got the Cayo Hueso Cuban Mix, a traditional Cuban sandwich with trimmings – while I went with the Tostones Rellenos.  It was four stuffed green plantains, filled with roast pork, picadillo, ropa vieja, and seafood creole. The verdict?  Delicious! 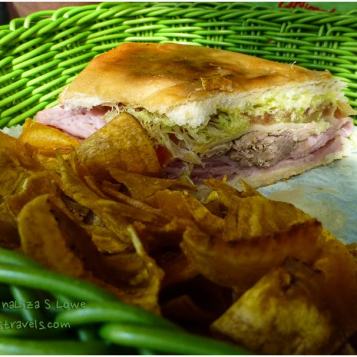 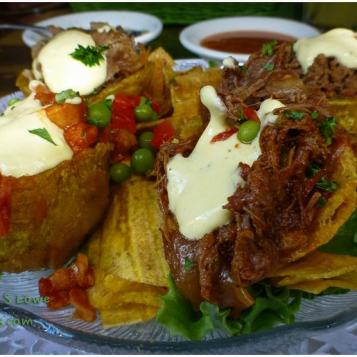 And of course a visit to Key West would not be complete without a slice of Key Lime pie – a culinary staple for any visitor on the island.  Yum! 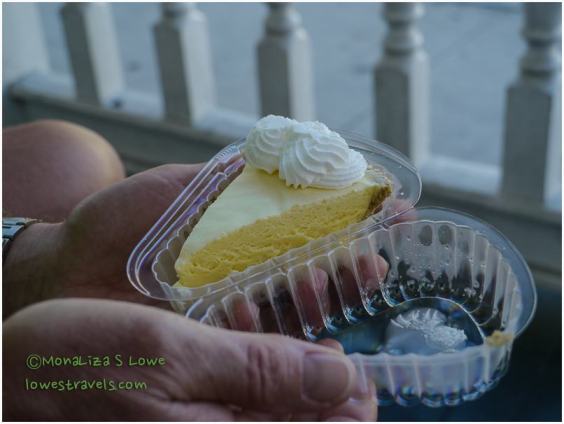 To quench our thirst after walking all around the island, we stopped at the Southernmost Cafe and Bar for a refreshing Rum Runner. 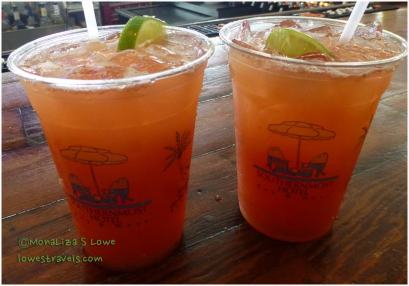 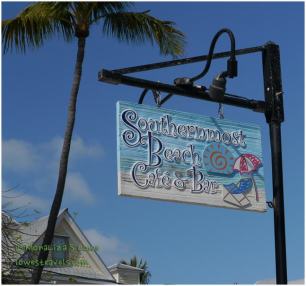 All roads in Key West lead to Mallory Square, where crowds gather for the  sunset celebrations.  But it had already been a long day for us, and we knew the sunset shots at our nearby state park would be just as fabulous, and without the crowds. 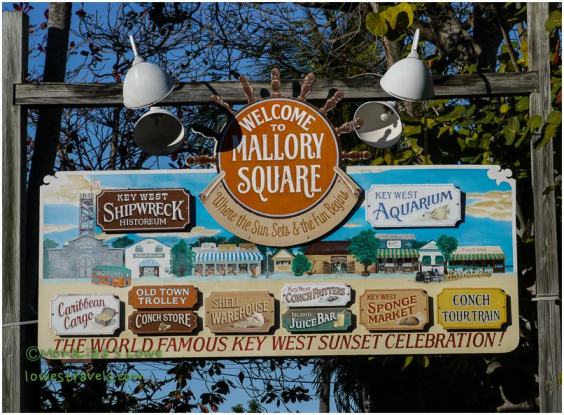 Our trip to the Keys was brief, but walking the island was the best way for us to see and experience it, and we covered it pretty well.  Now we can check that one off the list!

On Valentine’s day, Steve and I went back to Bahia Honda State Park for our last hike and last sunset.  But our day got exciting before we even left the RV park.  At the entrance we saw a vendor who sells fresh fish on Fridays, even calling her kiosk “Seafood Friday”.  It turned out the woman was from Ninilchik, Alaska, where she lives and fishes during the summer.  Then she brings down her awesome smoked products and winters in Florida, where she sells fresh local fish.  Folks coming down this way should try to stop at Sunshine Key RV Resort on a Friday, just to buy her extremely fresh and reasonably-priced fish.  Since we had been to Ninilchik, we stopped and chatted about her little town in Alaska.  And look what I bought for dinner!

After our walk that afternoon, we got a quick visit from our new friends – Vic and Pam of Travelin’ in the Big EZ.  They happened to be just a few miles from us, staying across the Seven Mile Bridge in Marathon.  It was a too-short hello, and I forgot to snap a picture posing with them.  Hopefully next time we’ll have a happy hour with them somewhere.

Finally, our last sunsets at the Keys. 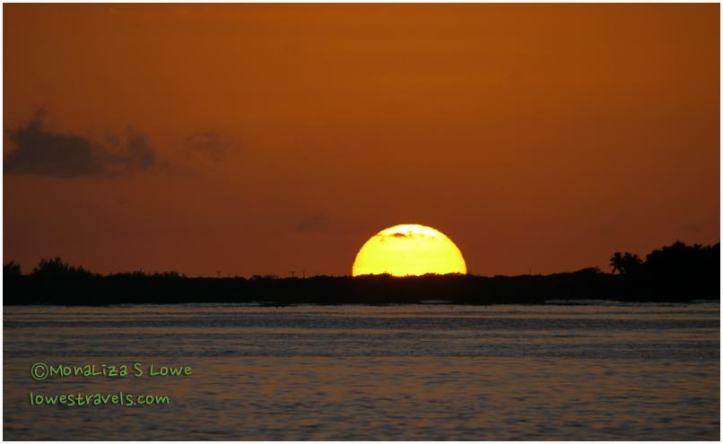 And when we turned around to go back to the car, we got a moonrise too! 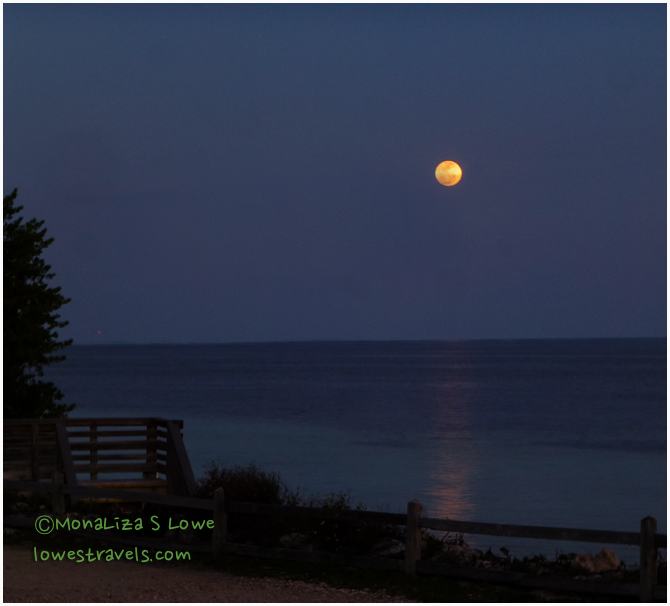 It was a perfect ending of our last night at the Keys.