The Missions of San Antonio

Besides the River Walk, there are several other touristy things to do while in San Antonio.  We were lucky to be able to take two tours – a personal one with Susan and Bob of Travel-Bug, and a paid one by Alamo Tours.  Our opinion – unless you are lucky enough to be friends with Susan and Bob, you’re better off skipping the professional tour and seeing San Antonio on your own.  As with many other paid tours, we were rushed and did not spend nearly enough time at some of the stops we made with Alamo Tours.  Most attractions are very well labeled, so a tour guide is not needed so much as just having plenty of time to read and learn on your own.

In downtown San Antonio you will see this orange structure, the city’s landmark. The “Torch of Friendship” was given to San Antonio by the Mexican Consulate as a sign of friendship and to represent the roots many Texans share with Mexico.

We toured the five missions of San Antonio ; The Alamo (1718), San Jose (1720), San Juan (1731), Concepcion (1731), and Espada (1731).  These five missions flourished along the San Antonio River in the early 18th century, obviously aided by the plentiful supply of water.  They became the largest concentration of Catholic missions in North America.  The missions were far more than just churches; they were communities.  Each was a fortified village with its own church, farm and ranch as illustrated below:

Originally named Misión San Antonio de Valero, the Alamo served as home to missionaries and their Indian converts for nearly seventy years.   A Texas shrine since the war for Texas independence, the Alamo today is a visitor’s center and museum of early Texas artifacts.  Admission is free and photography is not allowed inside the hallowed shrine.  The shrine and the legend behind it have made their mark as a symbol of heroism, courage and sacrifice for the 189 Texan defenders who fell to the Mexicans on March 6, 1836.  This is a tour stop that we wished had allowed us much more time to read through the narratives of the Battle of the Alamo.

On the southern side of town we visited Mission San Jose, known as the Queen of Missions because of its rich facade of the domed church.  It provided the strongest garrison against raids from Indians.  The mission is also an example of a completely restored mission renowned for exquisite stone carvings.

Indian families lived in these rooms built inside the exterior walls of the compound.

The church that remained at Mission Concepcion was established in 1731.  It’s the oldest unrestored stone church in the US and stands as it was completed in 1755.

Inside are original frescos of religious symbols and architectural designs. 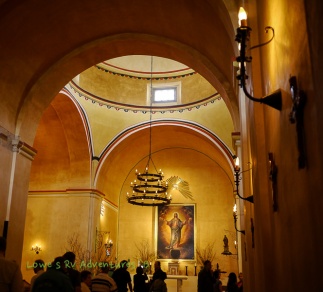 Hand paintings on the wall

Mission Espada features a very attractive chapel, along with an unusual door and stone entrance archway.  Inside this church we noticed some markers and devices which detect structural movement along cracks in the walls. 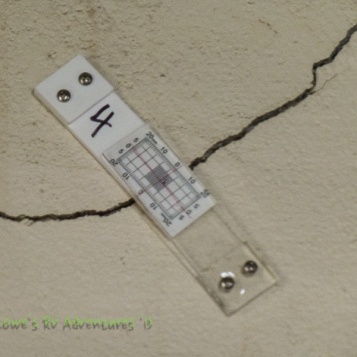 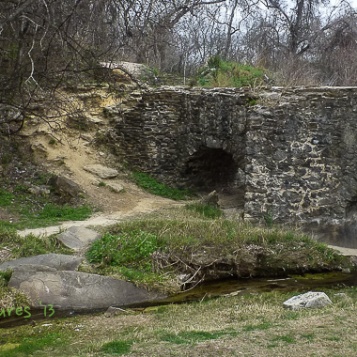 Our tour also took us to the Japanese Sunken Gardens, a unique old stone quarry known for its beautiful foliage.  At this time only the Mountain Laurels were beginning to bloom. 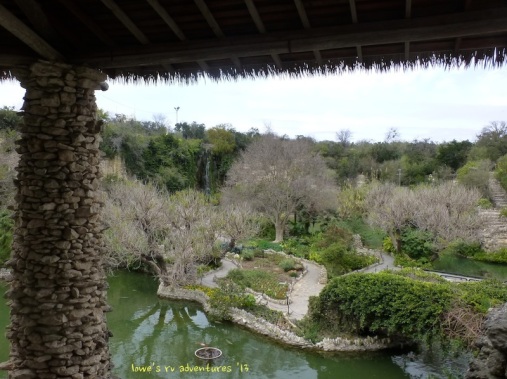 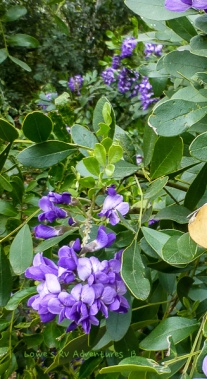 The Buckhorn Museum houses artifacts from Texas history, along with world record wildlife exhibits – over 520 different species.  This place is very interesting, and should not be missed if you are in the area.  It’s sort of a hodge-podge of unique museums put together, with an excellent historic saloon downstairs.  The tour didn’t give us enough time to really check out the saloon or to enjoy one of their local brews.  We could have spent a lot more time here, too!

Collections at the museum 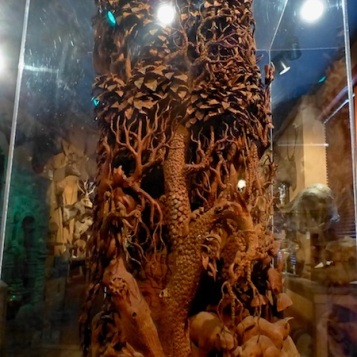 Within the same building, the Texas Ranger Museum is where authentic artifacts from the rangers are displayed and the dynamic history of the most famous law enforcement agency is explained. 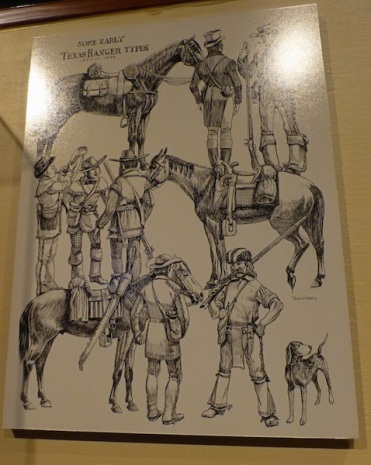 Lastly, a happy hour (ok, a few hours) of food and games with our new friends Susan and Bob was in order.  Then, on the morning we departed I met briefly with another blogger, Debbie of the Great Escape from NJ.  She had just arrived at the RV park.  The chance of meeting fellow bloggers at the Travelers World Resort is good, due to the park’s popularity and accessibility to transportation and the River Walk.  Although the spaces are a bit tight and we heard the trains quite often, we’d still return here for future visits to San Antonio.