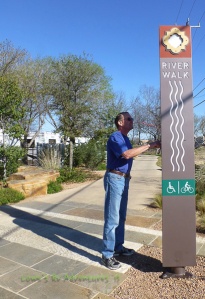 When Susan of Travel Bug knew we were heading east and would pass thru Texas, she recommended the River Walk in San Antonio.  What’s more interesting is that they were staying at the park where we planned to live during our stay.  Yet another blogger to meet in person! When we arrived there our new friends, Susan and Bob, graciously gave us a mini-tour around the missions and other areas of which I will talk more in my next post.  We also enjoyed a nice dinner and games with them before we moved on.

For now lets talk about the San Antonio River Walk – aka Paseo del Rio, the jewel of San Antonio, Texas.

So where does all the water in this river come from?  We learned that the  San Antonio River rises in a cluster of springs and the headwaters of the spring known as the Blue Hole is located on the campus of the University of the Incarnate Word.  The surrounding creeks empty into the river just below its head, and other springs continue to join as the river flows through the city and empties into the Guadalupe River.

The network of walkways and bridges, known as the  San Antonio River Walk, is one of San Antonio’s principal attractions.  The River Walk has been extended, and the whole network is now a 15-mile masterpiece that weaves the city’s past and future together.  Starting north of the city at Brackenridge Park (San Antonio’s Central Park), it continues south all the way to the four preserved 18th century Spanish colonial missions south of downtown.

The  downtown reach is 20 feet below street level and meanders through beautifully landscaped paths lined with numerous shops, bars, restaurants and museums.  We walked the  stone pathways connecting these attractions with a blend of historic and modern architecture that resonates the depth of this centuries-old metropolis.  We noticed the intricate network of bridges, walkways and old staircases.

We stayed at the Travelers World RV Resort, which is located smack in the middle of the River Walk.  It provides easy access to the path for walking or biking in either direction.  One day we walked from the RV Park all the way to downtown, a moderate effort of 11 miles roundtrip – with a refreshing beer stop along the way at Blue Star Brewery.

Flood management is also critical along the river since a disastrous flood hit in 1921.  We saw several impressive flood control structures and learned there is an underground “bypass tunnel” several miles long which aids in flood control.

On another day we biked the southern end of the riverwalk to one of the Missions.

Resting after our ride

Benches under a bridge

Finally, my blog would be incomplete without mentioning the wild animals which were abundant along the path in both directions. 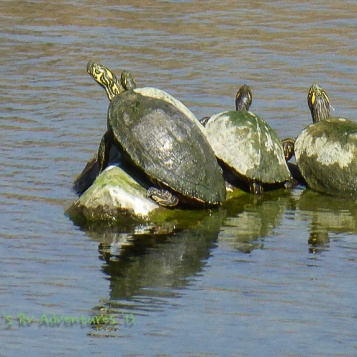