Wrapping up our summer getaway on Vancouver Island, British Columbia

Okay, I promise this is my final post about our summer visit on Vancouver Island!

We arrived unscathed at Parksville on the east coast, our next stop after retracing our path across the island on highway 4.  We made it over the 18% grade again, with less stress this time since we knew what to expect.  The usually long wait at the construction area was only 15 minutes – no sweat. 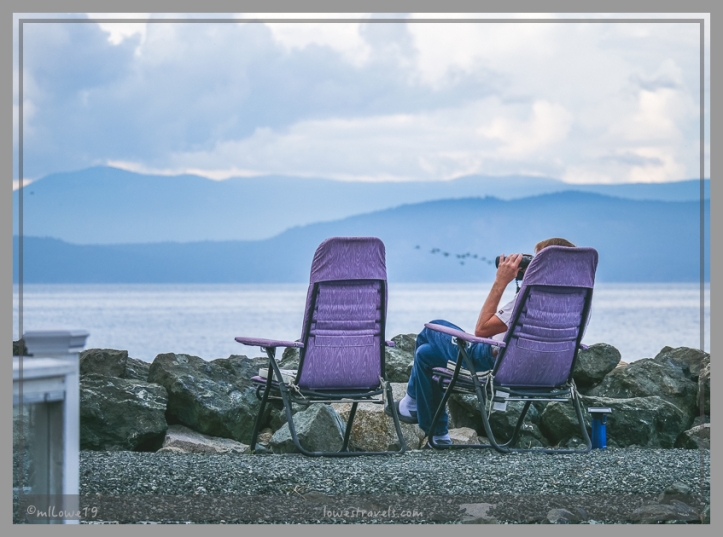 This pause allowed us to catch up on chores that had been put off during our 10-day stay in Ucluelet.  Parksville is known for its mild winters and long, calm sandy beaches, quite the opposite of where we had just been.  Our back yard was the Salish Sea, and we spent many hours gazing across the water while enjoying the birdies, watching cloud formations and the passing cruise ships.  I couldn’t pick a favorite cloud picture, so here are all of them 🙂 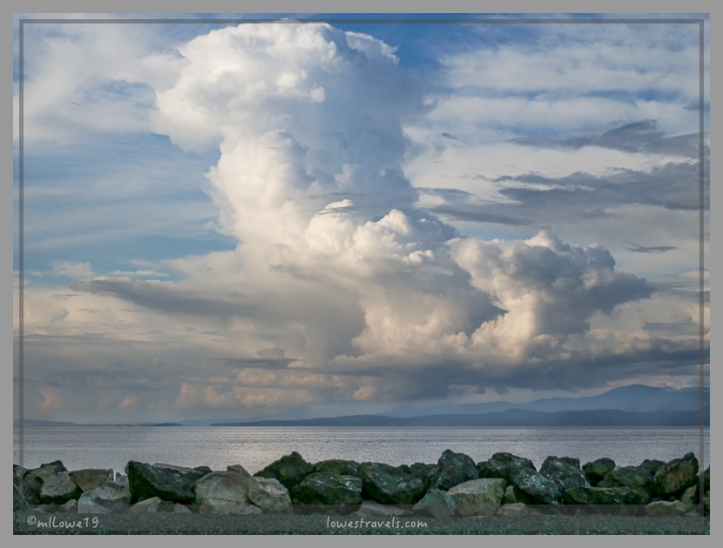 We walked around the RV park and noticed configurations we’d never seen before:

At Rathtrevor Provincial Park, the ocean recedes almost a mile at low tide, exposing a broad expanse of sandy beach.  Our arrival time allowed a combined walk on the ocean floor followed by a trek through forest near the beach:

Our final stop was on South Island in Victoria, the capital of British Columbia.  It was our jumping-off point to re-enter the U.S. at Port Angeles, WA.  The weather was dreary during our stay, but it was a revisit as we had been here in 2012 when the sun was shining.  That post was written when LowesTravels was in its infancy 🙂

Victoria is a beautiful walkable place filled with an array of activities and things to explore.  Raining or not, we spent every minute we could enjoying the city’s great sights and restaurants!

We went to Redfish-bluefish for lunch, as we had heard their fish and chips were to die for.  We weren’t disappointed:

A visit to the Royal BC Museum was high on our list this time and what better place to be on a rainy and foggy day.  The museum showcases galleries focused on natural, cultural and modern history and First Peoples of British Columbia.  It was a very interesting insight into the development of British Columbia over the centuries.

This excellent museum offered so much information to digest, and the displays about the First Peoples gave us a good understanding of their culture:

This year’s exhibition featured the Maya civilization, past and present.  It had an impressive display of Maya objects from Guatemala.  We learned from the stelas on display how science and belief shaped the Maya identity from ancient times to the present day:

A Maya stela is a stone slab with glyphs and drawings on it telling a story.  Hundreds of stelae have been recorded in the Maya region.  It took incredible time and effort to carve a story in rock, so only really important stories were recorded in that way.  Some historians refer to these ancient structures as stone trees.  The Stela archaeologists learned a great deal about the ancient Maya:

Should you visit Victoria, this museum is a must-do!

On the lighter side

We checked out two breweries, Hoyne and Driftwood Craft Beers, as recommended by Andy  He had mentioned the breweries here are a bit different – at most of them you can taste a flight of beers, but not buy a glass of beer should you want one – weird laws.  You can fill up a growler or buy their bottled beers, but the good news is that it costs only a $5.00 “donation” for a flight of four brews.  I liked the Gose beer at Driftwood enough to fill up my growler – of course we always carry our growlers in the car for just such an occasion! 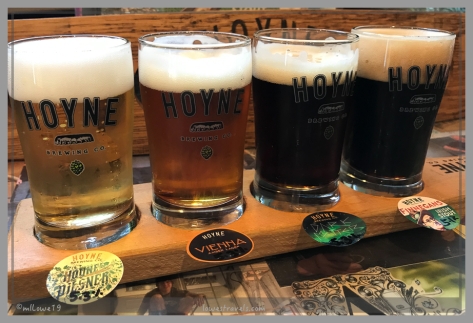 The brews at Hoyne didn’t impress us…

…but the Gose at Driftwood was growler-worthy!

In and around Victoria

While consuming all of the agricultural and meat products in our refrigerator in preparation for the upcoming border crossing, we tucked in two hikes near our site at Fort Victoria RV Park.  The trail at Thetis Lake Regional Park led us to forest, cliffs, clear water lakes and swampland.  Nice!

It was at Royal Roads Loop that I first heard of an activity called “forest bathing.”  It’s a concept described as soaking in the forest atmosphere by simply walking, quietly, slowly and deliberately in a forest, while taking in the sounds, scents, colors, forms and general vibe of nature.  We decided we’ve been “bathing” for 10 years now, but we sure enjoyed being all alone on this great hike!

A smile after “forest bathing”

A rolling fog made this hike mystical

Standing guard at the entrance to Esquimalt Harbor is Fisgard Lighthouse, the oldest on Canada’s west coast.  It houses exhibits on shipwrecks, various lighthouse lenses and light-keeping tools: 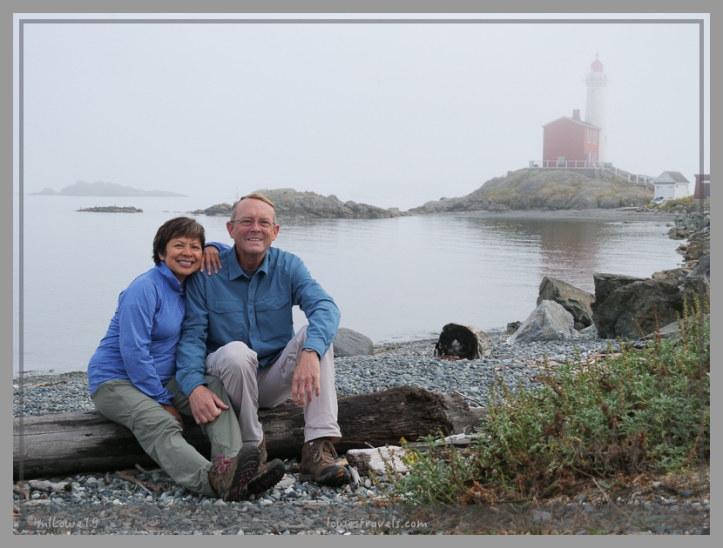 We arrived at the ferry terminal two hours prior to boarding.  Crossing the border into the U.S. is always stressful, but having been subjected to Betsy’s strip-search by the Canadian Border Patrol six weeks ago, we thought going back across couldn’t be any worse.  The process was different this time, with the Border  authorities going into each vehicle confirming our citizenship, then we walked to a building to have our passports scanned before we got on the ferry.  At Port Angeles the U.S. Customs checked for any agricultural products/souvenirs and as for Betsy, Steve had to pull over on the street for the officer to board and do the actual checking of the RV.  All in all, this final crossing was time-consuming but smoother than some of the others we’ve endured in the past.

As we pulled out of the harbor, the water taxi’s gave us a farewell performance that was fun to watch! 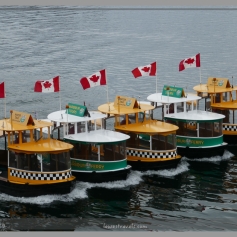 Here are some final images of Victoria as seen from aboard the Blackball ferry as we began our 90-minute journey toward Port Angeles, WA:

Our 6-week visit to Vancouver Island flew by quickly.  Except for the inverter/charger failure we suffered when we arrived, our drives and adventures went smoothly.  The weather was great most of the time, and the beautiful island offered a myriad of wonderful natural attractions and unique adventures.  We traveled over 870 miles and enjoyed 10 home bases during this adventure, and we had a fantastic time!

Goodbye Vancouver Island,
We’ll be back!