Continuing our slow move southward, the next stop was at Vernal, Utah.  Betsy had some serious mountains to traverse as we crossed the Wyoming-Utah border on the Flaming Gorge-Uintas National Scenic Byway.  We saw several major geological formations that exposed the core of the Unita Mountains, and as we neared the summit we paused for a few minutes to take in the breathtaking views of the deep multi-colored canyons:

Taking a break near the summit overlooking Flaming Gorge

We’ve driven this section of the byway before, and the unique geologic features never fail to “wow” us.  Several signposts can be seen along the roadside that teach motorists the geology of the area.  They identify the various rock strata and types of fossils found there, and describe the geologic time period.  My previous post contains more photos and information from our last trip through the area. 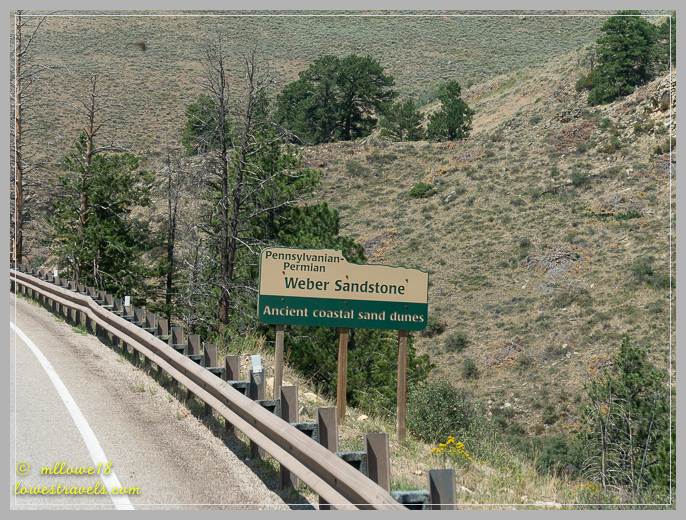 The city of Vernal and its surrounding area is “dinosaur country”, well known to geologists for the fossilized relics found in the ancient seas that existed here.  Our 2016 trip took us to Dinosaur National Monument, where more than 1,500 dinosaur bones and fossils have been found.  Click here to read more about the logjam of fossils located at the monument. 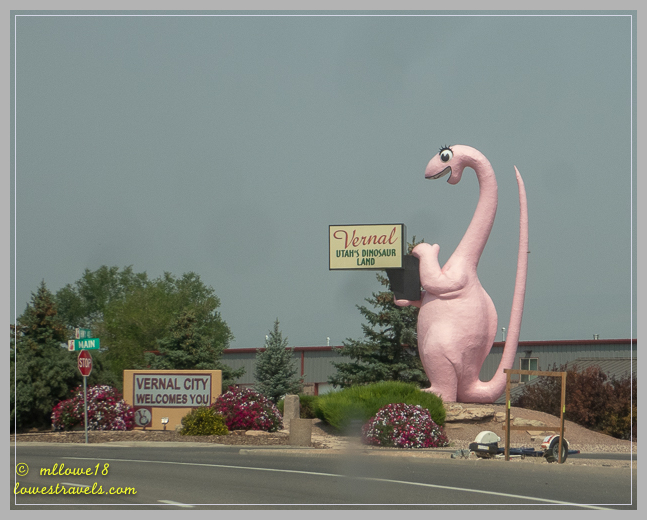 Temperatures hovered at or above 95 degrees during our one-week stay.  We were initially concerned that the smoke blown here from the California fires would hamper our outdoor activities, but we forged ahead with plans to hike trails that we missed during our last stay.  Unfortunately most of my photos are a bit hazy and smoky.

There are many excellent trails here on the ancient floodplain which was once home to dinosaurs.  Sticking to our mantra of early starts and lots of water helped us to beat the heat and have the trails practically to ourselves 🙂

The reward at the end of the 1.8-mile Dinosaur Trackway Trail is not as obvious as other hikes.  Based on plaques along the way, we had to search for the reward: 200-million-year-old dilophosaurus tracks preserved in the slick rock shores of Red Fleet reservoir.

While neither of us is into paleontology, seeing the tracks is still pretty amazing.  The trackway is found on a slanted rock at the end of the reservoir, which is sometimes partially covered during high water periods. 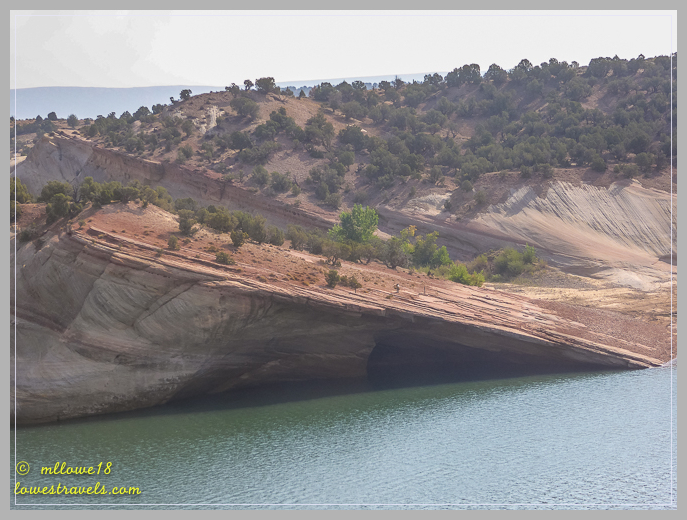 A short 1.8-mile hike from a road across from the state park got us out to the tracks

The Red Fleet track site reveals several hundred footprints, and includes five distinct trackways.  A trackway is a set of three or more footprints left by the same creature, and they are rare.  Some were much harder to see than others, but we managed to find several: 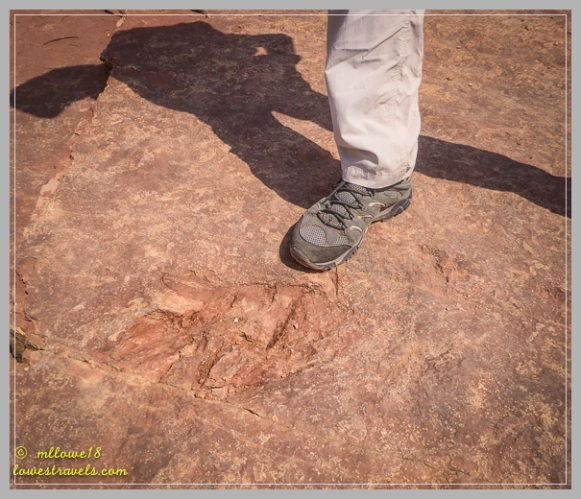 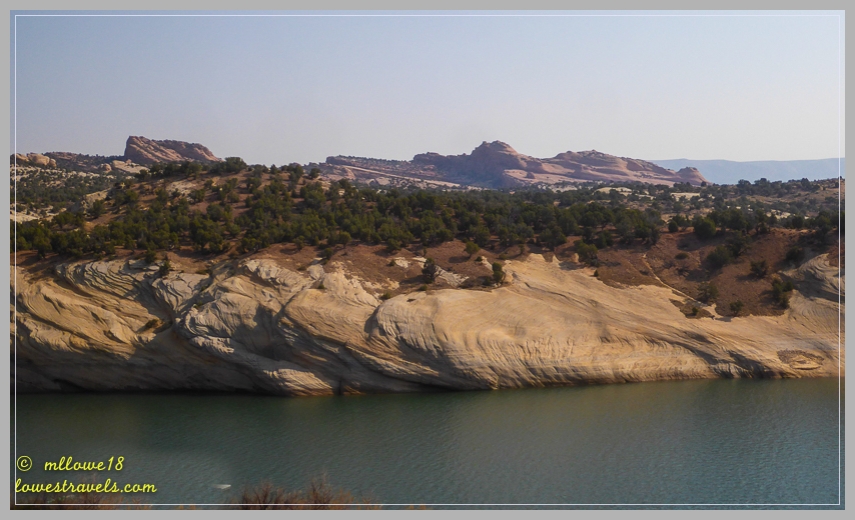 Both of these trails reside within Dinosaur National Monument, and can be combined by a connector trail to provide a wonderful 6.3-mile loop hike.  They are interpretative trails; the Sound of Silence Trail has numbered trail markers that coincide with a guidebook, while the Desert Voices Trail has plaques that include commentary about the park system and local challenges involving water and land use, and traditional ranching activities.  There are also displays created by kids for kids, one of which taught us about Antlions – never heard of them! 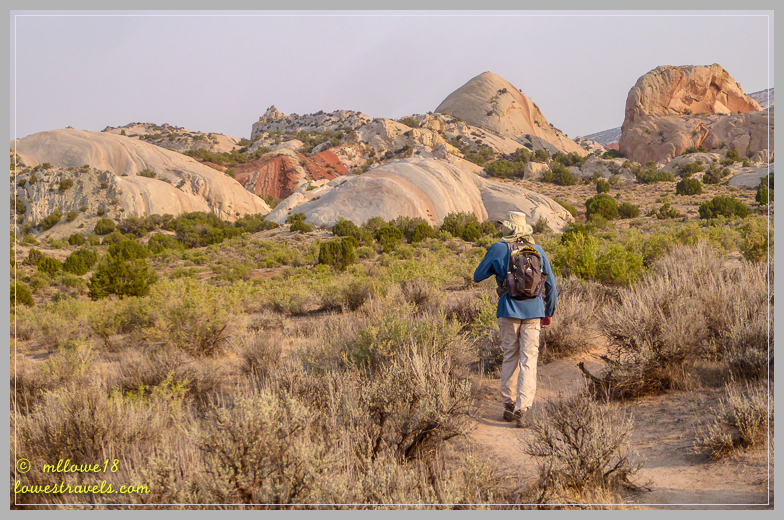 Nugget Sandstone dated to the Triassic age, 200 million years ago 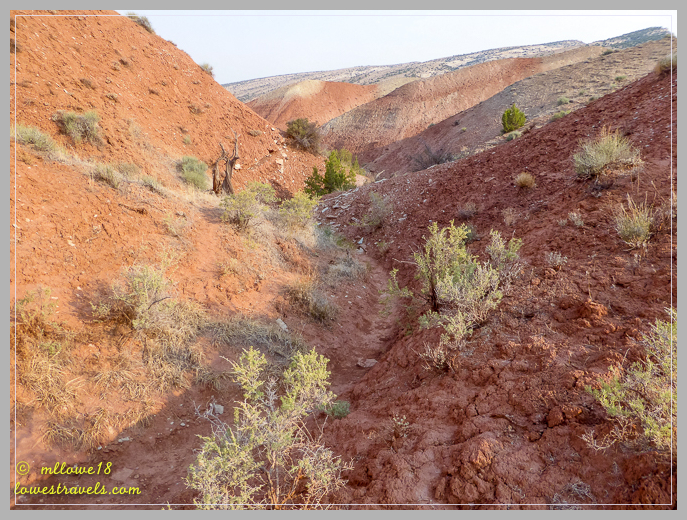 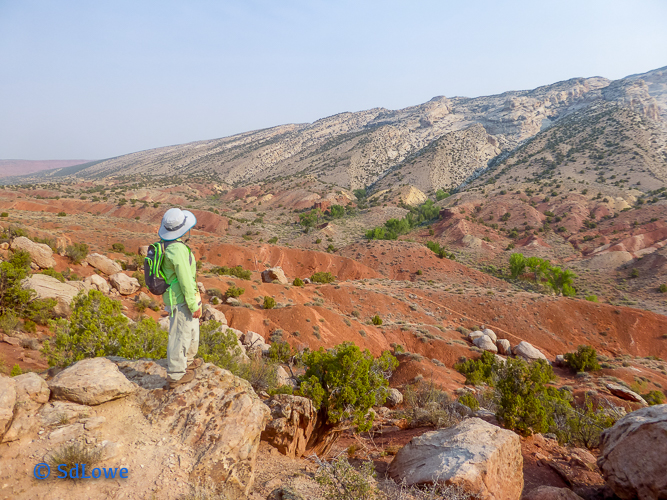 The presence of iron is responsible for rust-colored rocks, intermingled with layers tinted in yellow, orange and green

A hazy view of Split Mountain in the distance 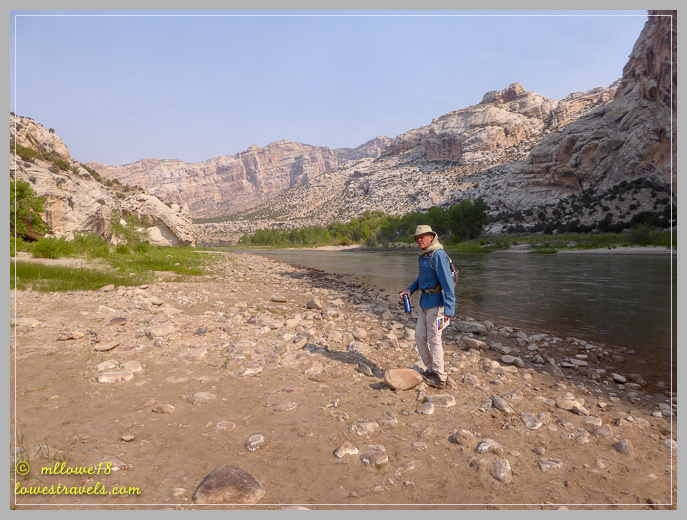 Green River was the turnaround point for the Desert Voices Trail 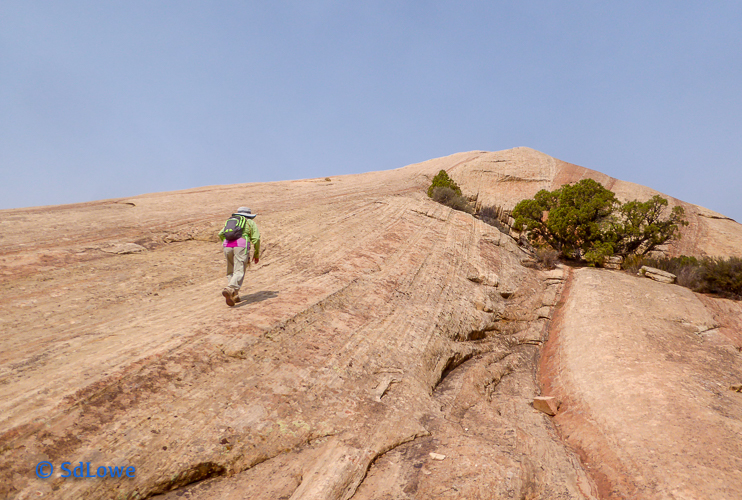 Yes, it’s as steep as it looks

Steve pushes a rock off the path – yeah, right!

Some of the thought-provoking plaques along Desert Voices Trail

This was a moderate hike, and happily we didn’t meet a single soul along the trail.  We were awed by the monument’s geologic diversity, colors and textures.  Because of the guidebook and plaques on this trail, we’re more aware of the many amazing changes that have occurred over millions of years, and the recent environmental changes surrounding us. We highly recommend this hike!

This was another winner.  Hiking to an arch is always exciting, even one less spectacular than this one.  Moonshine Arch is one of Vernal’s best kept secrets, and we’re very happy that our friends John and Pam had done this hike in the past and recommended it.

It took us a couple of tries to find the trailhead, and we suggest using the map provided by the State Park – and the All Trails app if you have it.

It was a short but quite strenuous hike to the arch.  I know, I know – a Jeep would have gotten us much closer! 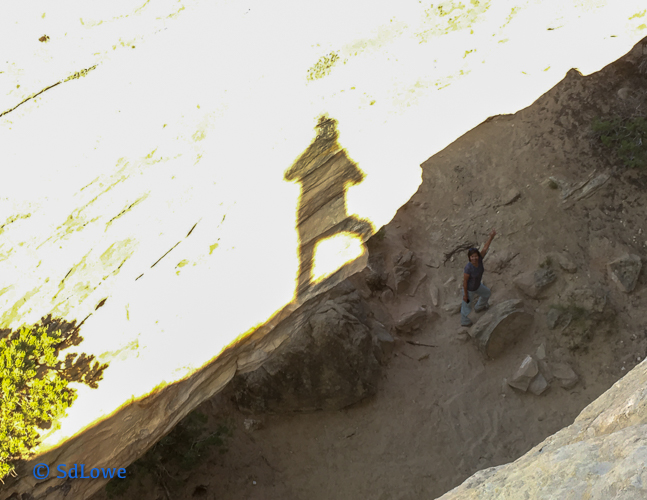 Steve scaled the arch and got this cool photo of us, his shadow on a rock and me below

We played in and around passageways next to the arch

When our friend Hans noticed on Facebook that we were in Vernal, he immediately suggested an excellent hike – but it was 40 miles to the trailhead.  Hans and Lisa know a good hike when they do one, so after a bit of groaning by Steve we were on our way.  Wow, they weren’t kidding – just the drive to the trailhead at Jones Hole National Fish Hatchery was worth the trip! 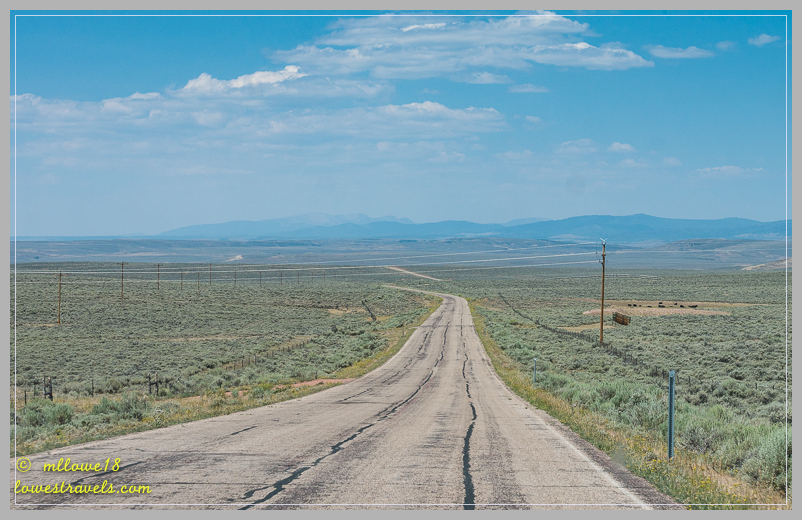 An early drive on Diamond Plateau gave us a view of sagebrush fields with literally hundreds of deer grazing all around.  We had to slow down several times to avoid hitting them 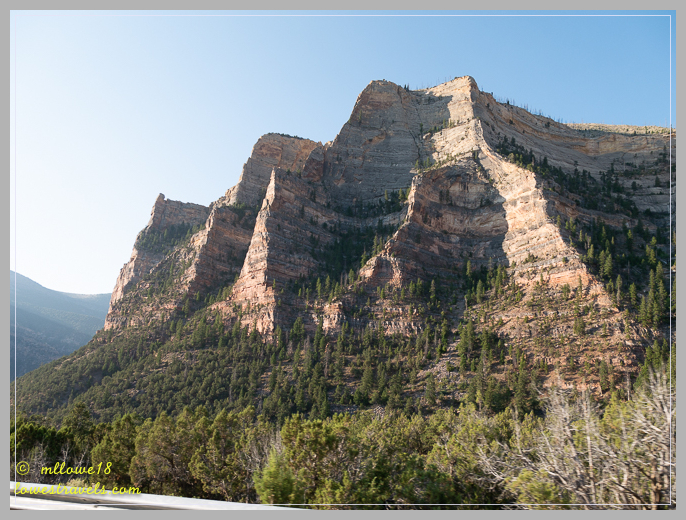 Descending off the plateau, the scenery changed radically and we were gawking at massive cliff faces

The trail is in a remote and scenic part of Dinosaur National Monument that runs from Jones Hole National Fish Hatchery to the Green River.  It was an easy 8-mile round trip hike, changing only about 200′ in elevation.  The walls of the canyon towered almost 2,000′ overhead, giving us shade during much of our trek.

The trail begins at the Jones Hole National Fish Hatchery – not much hatching going on today!

Listening to rushing water during a hike is the best!  Is there a bathroom around here?

This is an awesome trail that offers so much – a scenic canyon, Fremont Indian archeological sites, a spur trail to a small waterfall, and a Bighorn Sheep sighting if you’re lucky – all while meandering along babbling Jones Creek until it joins with the Green River.  We loved it!

The steep cliffs gave us shade all morning 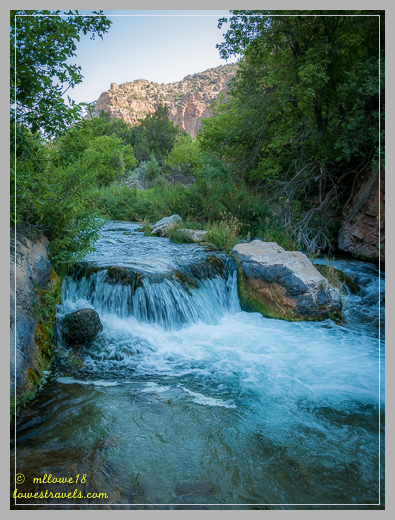 Petroglyphs (rock art) and Pictographs suggest that Fremont Indians hunted game here some 800 to 1200 years ago: 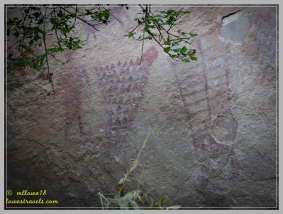 End of the trail where Jones Creek joins Green River.

On our way back, a splash of cold water kept me from overheating 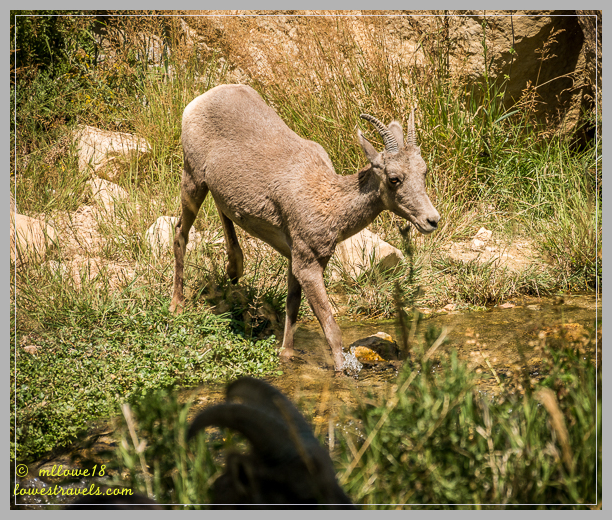 We were ready to give up on seeing Bighorn Sheep, until we ran across a herd of them right along the trail and less than a mile from the trailhead where we had started!

Quite a few of them showed up to congratulate us on our successful hike!

Steve says the calorie count in my app is totally bogus – too low.  But what matters is the “high” you get after the hike, right?

On our final day at Steinaker State Park, we accessed the park’s Eagle Ridge Trail from the group camping area.  It followed the ridge and gave us great views all around, including a glimpse of Moonshine Arch, Hogback Ridge, Betsy in the campground, and almost empty Steinaker Reservoir.  It’s expected that the reservoir will be re-filled in Fall of 2019 after planned dam modifications are completed.

Now that we knew where Moonshine Arch was, it was easy to spot from Eagle Ridge

Steinaker Reservoir is being emptied for planned repairs/upgrades 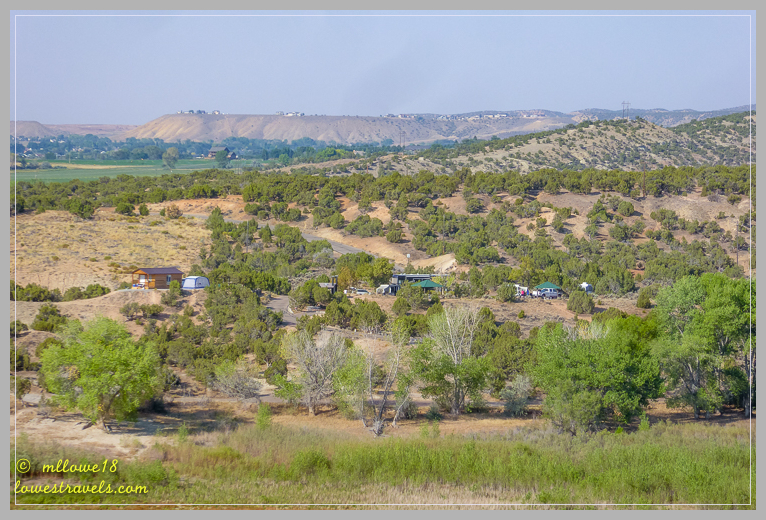 Steinaker State Park Campground with Betsy among the trees, do you see her behind the green cover?

That wraps up our one-week stay at Steinaker State Park.  It was hot and smoky, but we felt we had explored much more of the place where the Dinosaurs once roamed.