Our rule is to not drive more than 200 miles in a day, and so far in our six years of travels we’ve broken it only 3 times.  But that was only because we were in Alaska and had little choice while trekking across the vast Alaska Highway wilderness.  So when Steve realized the drive from Moab to North Salt Lake City was well over 200 miles, we decided to take a midway break at Price, UT.

While making the RV park reservation, we asked what there was to do in the area.  The owner advised there were 10 museums nearby, along with six other activities in the vicinity – including several hiking trails.  We went ahead and booked 2 nights so we’d have a full day to check things out.

We opted to defer the museums for a return visit, and instead chose to enjoy one of the outdoor activities – driving through Nine Mile Canyon – which I recalled reading about in Jodee Gravel’s post.

I initially thought we’d be driving along and looking at a 9-mile long panel of rock art, when in fact it’s just part of a 70-mile backcountry byway.  There are several theories of how Nine Mile Canyon got its name.  An old one in 1869 says that John Wesley Powell’s cartographer (map maker) used a nine-mile transect system for mapping out the area.  A more modern version refers to the 9th Cavalry, which built the road for better access to Fort Duchesne for the moving of troops and supplies.  Either way, the Nine Mile Canyon name has stuck to this day.

History says that in a span of 8,000 years or so there was a succession of people and cultures that lived and traveled through Nine Mile Canyon.  They consisted of the Native Americans, the 9th Cavalry who built the road, freighters that hauled goods to Price from Uinta Basin, and settlers.  Each left traces that included rock art, historic inscriptions, old homesteads and abandoned mines.

This post is about the petroglyphs (images carved/inscribed on a rock surface) and pictographs (symbols or art painted on rock surfaces) left behind along the canyon walls.  Neither historians nor archaeologists have been able understand or interpret the messages they may impart.  But for sure the abundance of this well-preserved legacy on stone is unique and irreplaceable.

There were no signs in the canyon directing us to the sites, but with the help of this guide or this one we enjoyed trying to find them on our own.  Armed with a mile-by-mile guide, we searched along the 50-mile stretch of rock art.  Truthfully, the mile marker guide and map were less than in-synch, and we did a bit of head-scratching and back-tracking for a while – all part of the fun!

Cruising through the canyon, we drove slowly and looked carefully at all rocks with black patina on them.  There were so many petroglyphs!

There were some more recent traces of people who also left their mark: 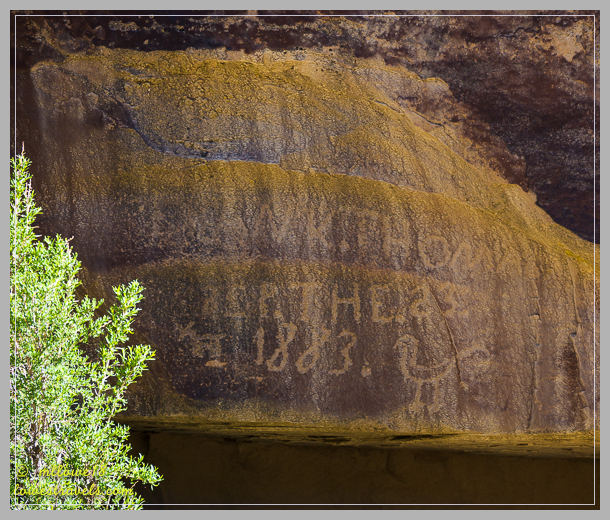 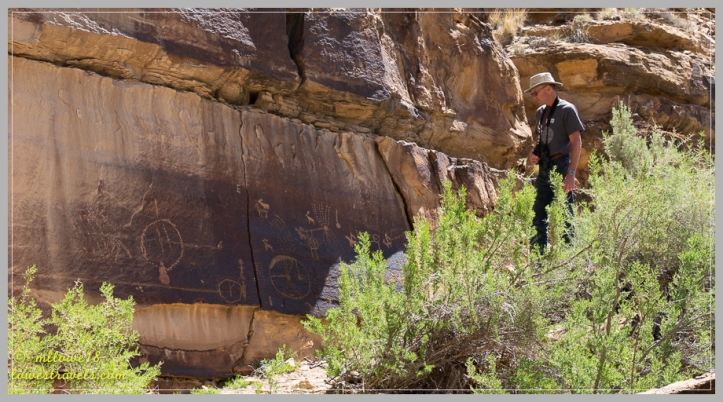 Some petroglyphs were distinct and others quite faint: 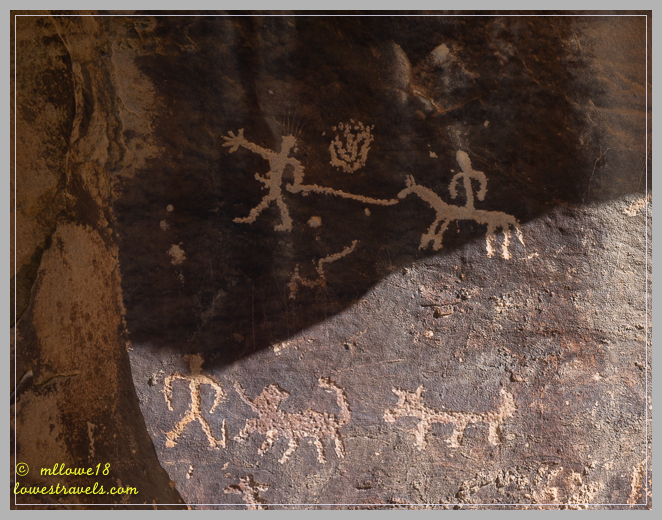 The highlight of all rock art here is the famous “Hunt Panel”, which is located near the end of the canyon at mile 45.9.  This one can’t be missed, for it has a parking area with a kiosk.  It holds one of the finest petroglyph panels we’ve seen, and it appeared in National Geographic magazine as the best example of Fremont rock art known.

We had the canyon to ourselves, except for the wildlife monitoring us.  There were three other canyon spurs that beg for exploration; Lower Nine Mile Canyon, Dry Canyon and Gate Canyon.  But we’d had enough for one day, an interesting and relaxing drive with so much to see and think about!