We first saw the incredible formations in Monument Valley during our drive through the area on highway 163 a couple of years ago.  At that time I was reminded of the amazing scenery of many western movies and photos from the distant past.  I only had time for a few photos during that passage, but we vowed to spend more time here and did just that during the last week of March this year.

Monument Valley was destined to be a hidden natural treasure, enjoyed by only a few intrepid travelers venturing into this area wilderness.  But we learned that thanks to Harry and Leone “Mike”  Goulding, it was transformed into an icon of the American west.  During our stay at Goulding’s RV Park, our eyes were opened to how it became a popular place to stay and play for Hollywood stars and many other folks passing through.

And the story goes …

In the early 1920’s, Harry, a sheep trader and Leone (nicknamed “Mike”) came to Monument Valley looking for a business opportunity.  They were very fortunate to buy a substantial plot of land when the Paiute Indian Reservation relocated and many acres became available for sale.

The Gouldings immediately set up Goulding’s Trading Post at the base of Big Rock Door Mesa, while befriending and conducting business with the local Navajo people who accepted them.  Unfortunately, when the great depression hit the Navajo Reservation suffered immensely.

Harry and Mike went to Hollywood to show pictures of the beautiful valley to director John Ford.  They convinced him that Monument Valley was perfect for his next movie, and in less than a month Ford began shooting “Stagecoach”, which starred John Wayne.  Nine more Ford films were shot here, which not only helped the Navajo with much-needed money, but also opened to the world the stunning red rock formations standing tall in the middle of the desert. 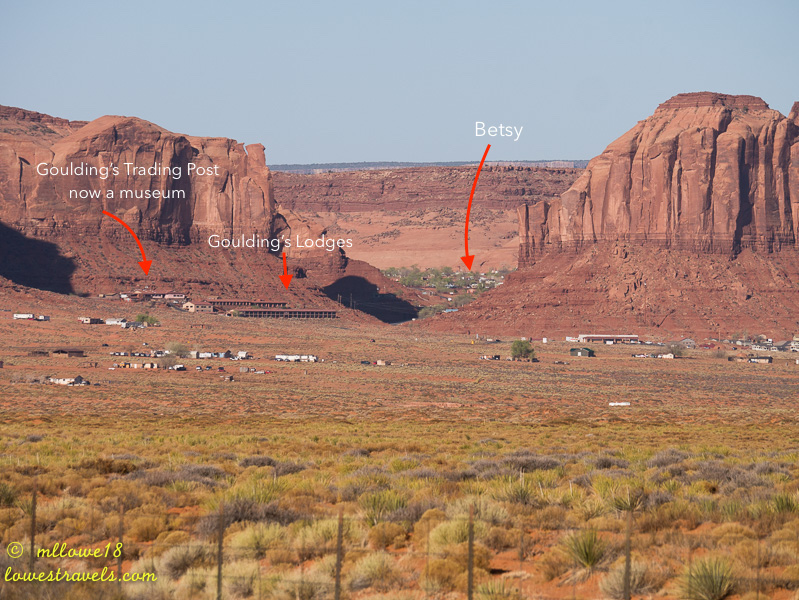 Gouldings- the hub at Monument Valley

Many decades later, Goulding’s Lodge consists of a lodge, cabins, museum, restaurant and an RV campground.  Goulding’s businesses have grown and changed hands through the years as Monument Valley has continued as a backdrop for many movies and television shows and ads, as well as a popular tourist destination.

Goulding’s Lodge was placed in the National Register of Historic Places in 1980 for its importance to the local area.

This iconic stretch of land is in the heart of the Navajo Indian Nation, and home to the Monument Valley Navajo Tribal Park, which spans the Utah/Arizona border.  The Navajo Nation Parks & Recreation manages the park valley, not the National Park Service.

The valley viewed from the windmill formations

To see what is beyond the walls of the monuments, several tours are offered by various Navajo operators located near the visitor center.  We opted for an all-day tour offered by Goulding Tours, which took us down not only the rugged 17-mile loop of Monument Valley to view the famous monuments, but also the restricted backcountry and Mystery Valley, amazing areas far away from public access.

All bundled and layered up this bright early morning!

Most areas here are off limits unless you are with a Navajo guide, and our guide Larry took us into several restricted areas.  He told many stories about Navajo culture and history during our excursion.

Our first stop was at a hogan, which was a primary traditional dwelling of the Navajo people, although today it is used for ceremonial purposes. 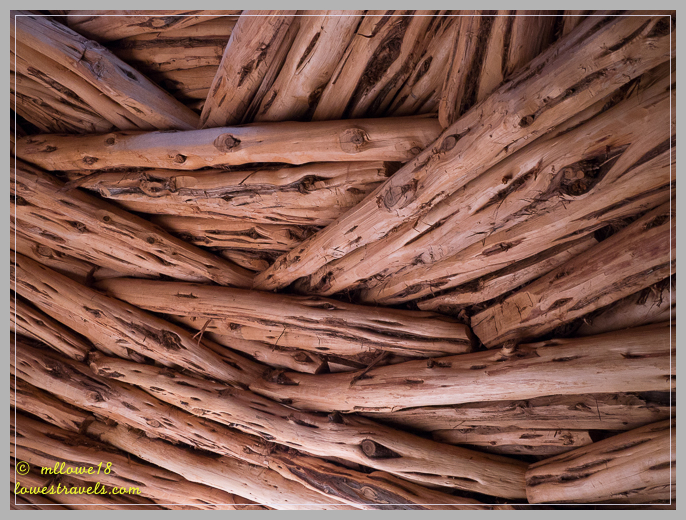 The roof is constructed by criss-crossing Cedar tree sections.  No nails are used, and the exterior is covered with mud for structural strength and as a barrier against the elements

Inside the hogan, a grandma demonstrated the Navajo technique for processing raw wool fleece from sheep into a weaving yarn and ultimately looming it into a beautiful rug.  What’s amazing is there are no patterns to follow and the design comes completely from the weaver’s imagination.  She also showed us how blue corn is ground and some basket weaving techniques.

I was attracted to the beautiful jewelry as she ground corn

We continued our sandy and dusty excursion, as Larry narrated through a speaker system that was set up in the back of the vehicle. 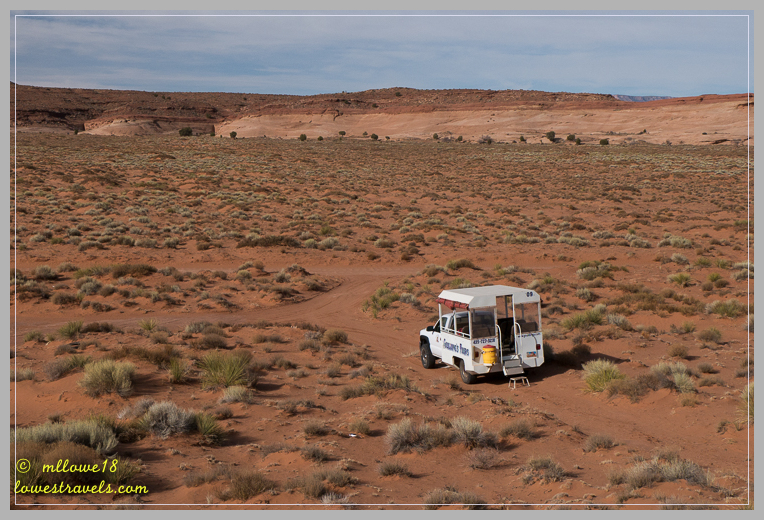 When we were on top of a hill he related the story of how in 1863 the Navajo people were mistreated and forcibly removed from their ancestral land to begin The Long Walk of 425 miles from Fort Defiance, AZ to Fort Sumner, NM where they were exiled.  This year marked the 150th anniversary of the signing of the Navajo Treaty of 1868 between the Navajo and the United States government, which gave them the freedom to return home after four years of internment.

For the next 29 miles we were led into Mystery Valley’s side-box canyons, visiting much of the valley’s secluded natural arches and windows.  There’s also an abundance of concealed and undisturbed Anasazi ruins, petroglyphs, and pictographs in this area.

View from the right eye of the Skull Arch 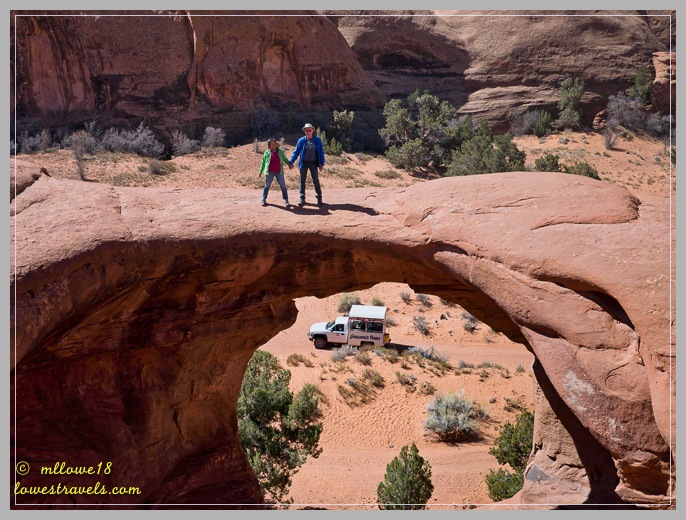 We just had to pose on top of Honeymoon Arch, which got its name from the small “honeymoon suite” ruins located inside it

Undisturbed House of Many Hands

While Larry prepared lunch we checked out more ruins and petroglyphs within the huge box canyon: 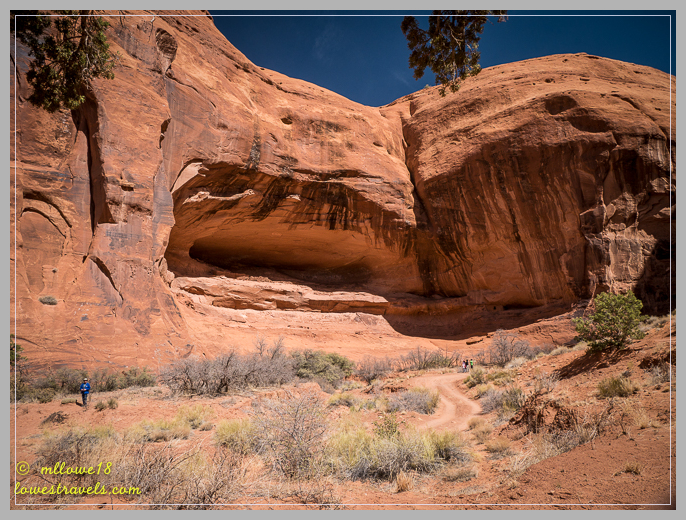 These unnamed ruins were reduced to rubble

Soaring cliffs within a box canyon – our beautiful lunch spot

Larry, our guide and cook

This family flew their own plane to Monument Valley

After lunch Larry drove us deep into the backcountry, where he continued his narration of the valley’s history, geography, culture and lore.  As we passed clusters of Navajo communities, he mentioned that 30% of Navajo people have no electricity and no running water.  Income is derived from tourism and sales of handmade trinkets, jewelry, and beautiful intricate rugs.

Clusters of Navajo families can be seen scattered across the valley

In some places we saw hogans alongside modern homes and cars 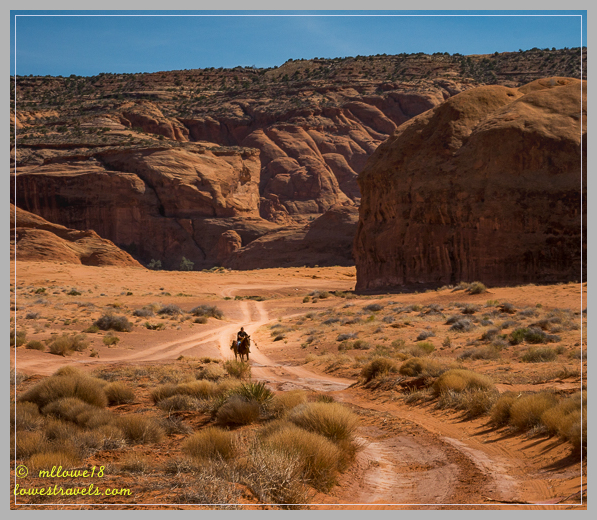 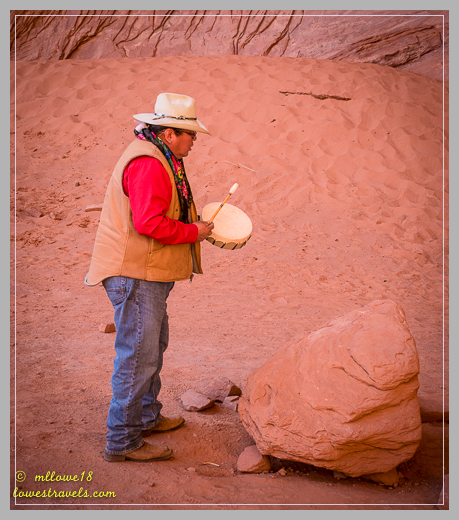 After his chant we were asked to lie down on our backs along the rock wall, and to look up at the arch to see the eye and beak of an eagle: 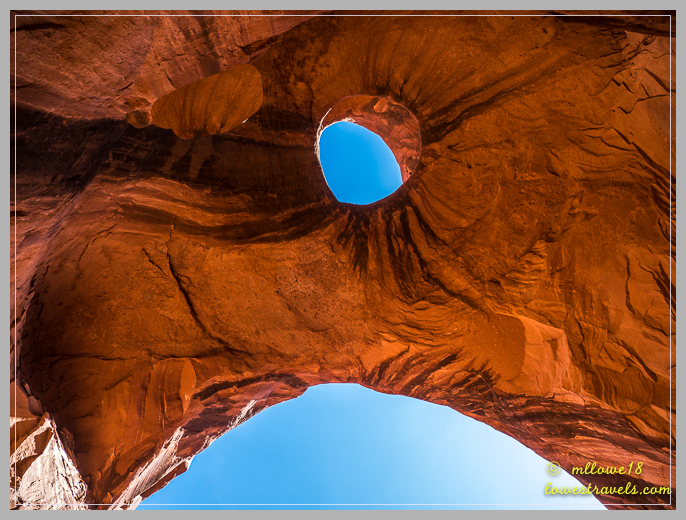 Can you discern the eagle’s head and eyes? 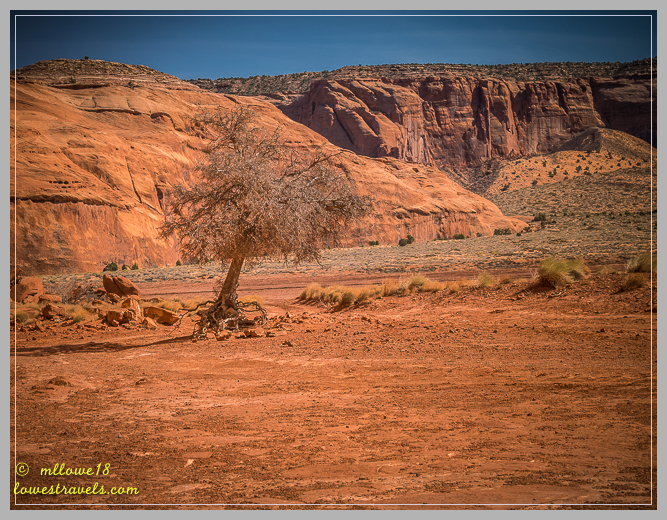 This lone tree blended well with the surrounding cliffs

Running goats at the base of Eye of the Sun Arch 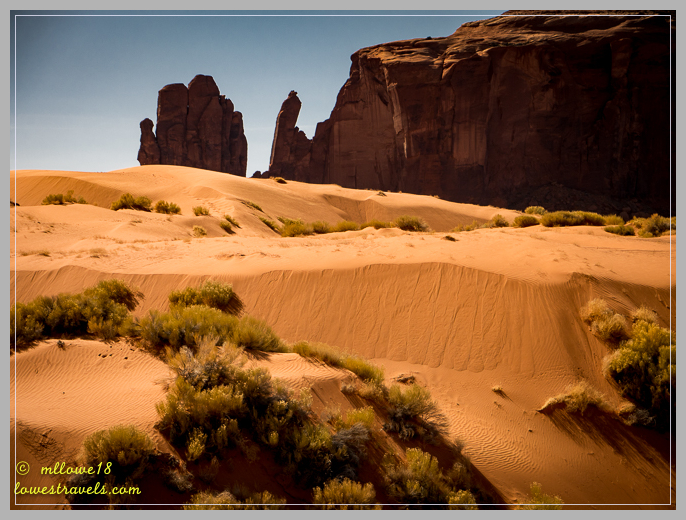 Large sand dunes are the result of monument erosion

Finally we were in the shadows of the amazing rock statues, the monuments that Harry and Mike introduced to the world.  Our tour’s final stretch was over the rugged 17-mile loop that is open to the public.  Larry pointed out places where famous scenes from movies, TV shows and commercials had been filmed over the years.

Scene from the 1939 movie “Stagecoach”

The valley that made John Wayne exclaim, “So this is where God put the west.” 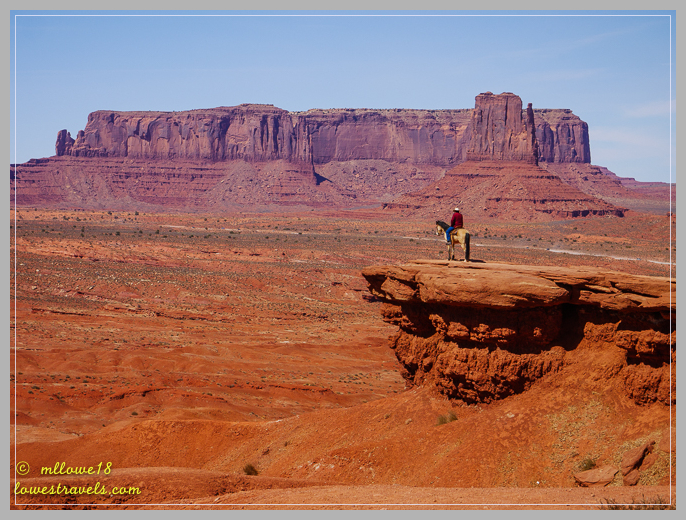 A resident cowboy poses for tourist’s tips at John Ford’s Point, mimicking a scene from the 2013 movie “Lone Ranger”

We were completely covered with orange sand at the end of our bumpy, dusty ride, but through Larry we had learned a lot about the Navajo Indians and what exists behind the Navajo Nation wall.  This all-day tour is the only way to see the heart of the valley of the Monuments!

Larry and our tour ride

Native Americans’ name for Monument Valley translates to “the sand that lights up the valley,” and below you can see why: 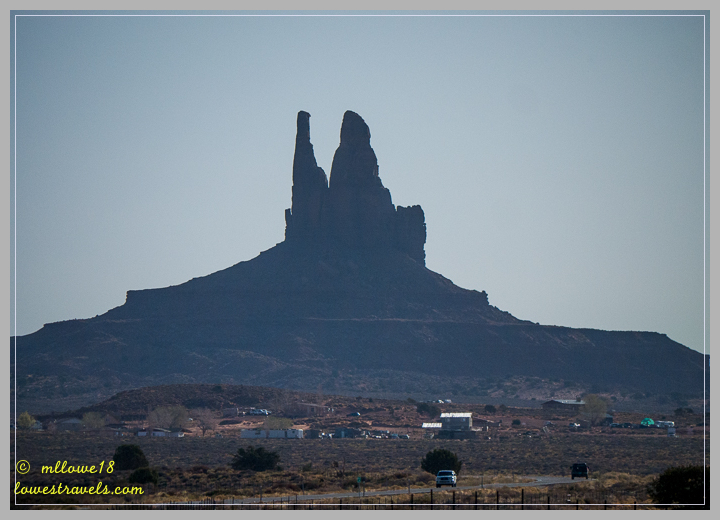 This formation is King on the Throne, but Larry says it’s John Wayne sitting on a toilet 🙂

West and East Mitten buttes, note the tourists below for perspective

Categories: Arizona, Utah, Where we have been