This is the final segment to wrap up the first chapter of our RV travels.  The previous segment with our statistics is here.

As we reviewed the 422 posts that we published along the way, we recalled many fond memories and also came up with some fun tidbits that we thought were unforgettable, surprising, scary, stressful or fascinating experiences.  Compiling this collection made us pause and reflect on how many wonderful experiences we’ve had while on the road.

We faced our first major challenge just as we started the journey at Pleasanton, CA.  A hydraulic failure left our jacks and slides extended, and we learned a lot about that system during the next 3 weeks that it took to get it fixed (under warranty, fortunately).  Since that time we’ve dealt with many minor water leaks, a dead video camera, an intermittent engine cooling issue, refrigerator problems and other things that we consider part of the joy of moving around in a big complicated box.

Most exasperating experience – Intense itching and a month of discomfort due to chigger bites.  I had never heard of chiggers until they attacked me as I sat in the grass for a picture in Peru, Indiana.  Here are the details of that nightmare.

Scariest moment – When I slipped and fell, hurting my knee – not while hiking, but just walking on level ground!  No hiking for a month!

Most stressful incident – We got locked out of our RV during a tornado watch while camped at La Grange, GA.  Surprisingly, this particular post has more hits than any other we’ve written.  Maybe the bad guys want to know how Steve broke into the RV?

Most frightening night – Hunkering down at Gulf Shores State Park in Alabama provided a sleepless night, as a long line of violent thunderstorms passed over us and dumped a record-breaking 15 inches of rain and over 7,000 lightning strikes per hour in the area.  We’ll never forget that night.

Most nerve-wracking drives – Due to bad GPS data and heavy traffic on the I-10 causeway approaching New Orleans, we missed our exit and got lost.  Then panic set in as we had a close call with a locomotive while crossing train tracks.  Not a fun drive!

Another hellish drive was on I-95 S coming  from Connecticut and passing thru the Bronx, New York to the New Jersey turnpike.  Here‘s that story.

Then there was the time when Steve heard a loud hissing noise coming from the back of Betsy as we drive into Halifax, Nova Scotia.  We couldn’t find the source of the problem and had to have our first repair in a foreign country.

Another scary drive occurred near our last stop in Kansas, at Sabetha.  We very nearly got stuck in mud as we approached the campground, then the owner directed us into a site where we got totally stuck.  Fortunately, the owner pulled Betsy out of the mud with one of his tractors when we left.

One of our most stressful drives was the stretch between Salem and Bend, Oregon.  Not only was it a narrow and mountainous road, but a huge storm hit as we drove, sending rivers of water down the road as high winds tried to push us over.  And nowhere to pull off the road.  It was intense!

Most spectacular drive – This one has to go to the Icefields Parkway between Jasper and Banff, Canada.  None of the 14 All-American roads we’ve driven can quite stack up against this one, and it should be on every traveler’s bucket list.

Proudest moment – Steve is quite the handyman, doing not only all of our coach repairs but also making changes and upgrades to improve our life on the road.  I was very proud of him when he completed the installation of our residential refrigerator, by himself, during our stay in Bonita Springs, Florida.

Most fascinating underground tour – Who knew there’s a huge salt mine 650′ beneath the plains of Kansas?

Most sobering historical guided tour – Having learned the Gettysburg address in school many years ago, we were amazed to actually be where Abraham Lincoln delivered the speech. Here’s a glimpse of our 24-mile, two-hour tour of the historic fields of Gettysburg, Pennsylvania. 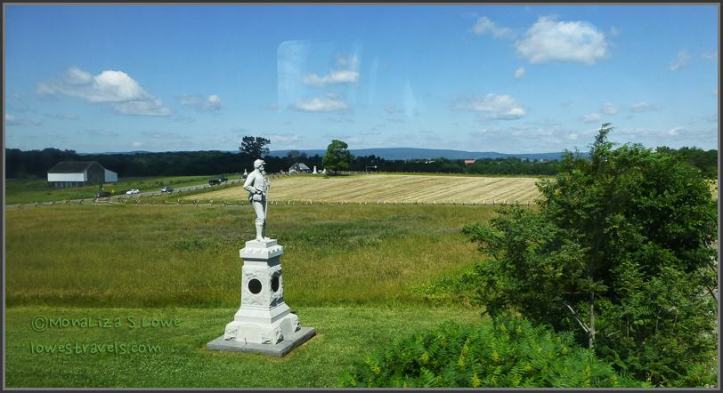 Most distinctive waterfront – There is no other colorful waterfront town that we’ve seen like Old Town Lunenburg, Nova Scotia .

The “I’ll never do this again” experience – I learned that one while Halibut fishing in Ninilchik, Alaska.

We’ve hiked so many trails that at this point we can’t really pick favorites, but we agreed these stand out:

Most challenging – Among the many trails we followed around the country, our climb to the top of Picacho Peak in Arizona may have been the most challenging.

Longest – Sometimes we get in over our heads when hiking or walking, and the one to Hoover Dam in Nevada from our campground at Lake Mead clocked in at 14.1 miles.

Most exhausting – Hiking on a rainy day is never in our plans, but when we’re halfway through our trek and the clouds open up we just have to grin and bear it.  Our hike on the Flat Top Summit Trail at Blue Ridge Mountains, North Carolina was one of those.  We looked like a couple of drowned rats when we got back to the car.

Farthest north – Arctic Circle, Alaska.  To get here we endured a 19-hour guided bus tour, and what an adventure is was during our many hours on Alaska’s Dalton Highway.

Farthest south – Key West, Florida, lots to do here and what a party town it is!

Farthest East – Louisbourg, Nova Scotia  and we happened to be there on its 300th anniversary of its founding in 1713.

Farthest West – Anchor Point, Alaska, what a great time we had here on the Kenai Peninsula.

Highest point in North America – we landed on the flanks of 20,320′ Denali Mountain on skis, a totally thrilling trip not to be missed!

Lowest point in North America – One of the lowest places in the world at 282′ below sea level, Badwater Basin at Death Valley National Park was fascinating.

Largest National Park in the U.S. – At more than 13,000 square miles, Wrangell-St. Elias National Park requires a plane ride just to get to the middle of the park in a reasonable amount of time.

Largest lake in the U.S. – Lake Superior made us feel like we were on the shoreline of an ocean!

Most awesome gondola ride – We took a thrilling ride aboard the Peak2peak Gondola in Whistler, Canada, which holds two records; the longest free span between ropeway towers at 1.88 miles, and the gondola with the highest point above ground, 1,430′.

Just for the heck of it fun tidbits – Mile zero’s

And the beginning and end of Alaska Highway.

This cairn is the location that U.S. Army surveyors designated as the beginning of the Alaska Highway

This monument signifies the other end of the Alaska Highway – Mile 1,422

And that wraps up almost five years of our RV travels!

We’re opening a new chapter in our RV life in 2017.  Completing visits to all of the states, our goal will now be to narrow our search to one or more places where we’d like to stop and park Betsy for long periods of time.  Our travels will be more laid back and less structured, likely focusing more on the western states.  At least that’s the plan as of today, but who knows?  Our blogging will taper off somewhat, and we’re pondering a format change for our site.

As we look forward to another year of adventures, we want to THANK YOU for “jamming on down the road” with us!