Highway 93 is a major north/south highway that begins in Jasper, Canada and ends in Wickenburg, AZ, 1,720 miles away.  The stretch from Mile 0 to Mile 144 is known as the Icefields Parkway, and it links Jasper to Lake Louise in the heart of the Rocky Mountains.  It winds along the Continental Divide, through Jasper National Park and Banff National Park, traversing some of the wildest and most rugged land imaginable – mighty mountains, vast sweeping valleys, raging rivers, glaciers, lakes, waterfalls and simply spectacular scenery.

We had seen pictures and read friends’ blog posts, and now we certainly agree it’s a must see, must drive for any visit to this part of Canada. 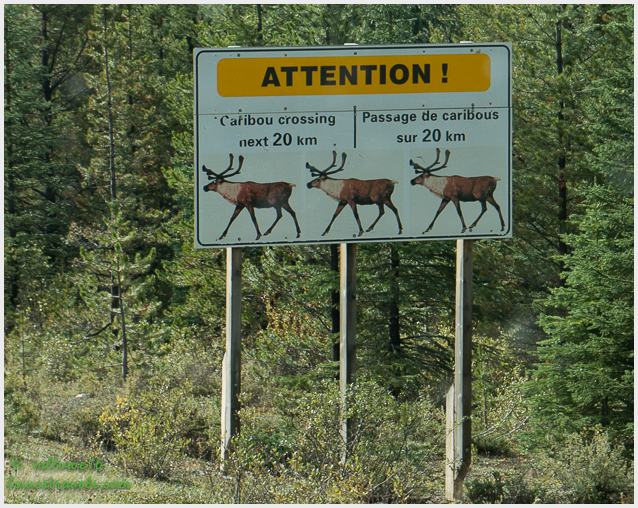 The parkway was built during the depression era, and due to the rugged terrain and short warm season, it took 9 years to complete.  Click here for more history about the parkway.

The trip can be made in three hours or less, but why rush it?  The jaw-dropping scenery will slow folks down soon after they cross through the entrance gate at Jasper (you need a Parks Canada pass to drive through), and likely wildlife encounters grab everyone’s attention.

We explored the parkway on several occasions.  While at Jasper we went as far as the Columbia Icefield – the border between Jasper NP and Banff NP – on one drive.  On another day we drove to Valley of Five Lakes near Jasper and picked up a trail there.  Finally, we drove all the way with Betsy to our next destination at Lake Louise. 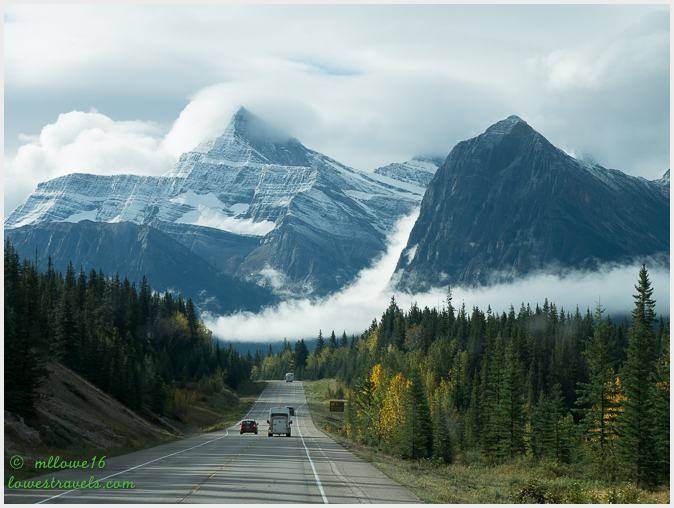 There are several viewpoints, interpretative displays, points of interest and photo opportunities along the route that once again kept my camera in overdrive.  Some pictures were “drive-by shootings”, while others were taken while we were on a trail. 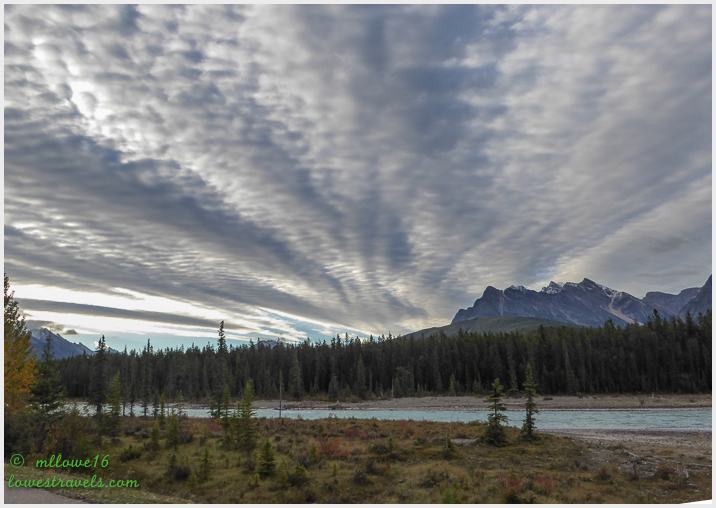 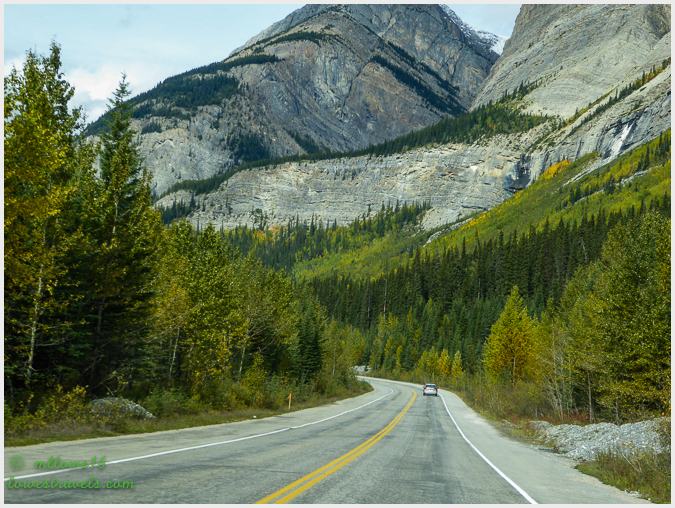 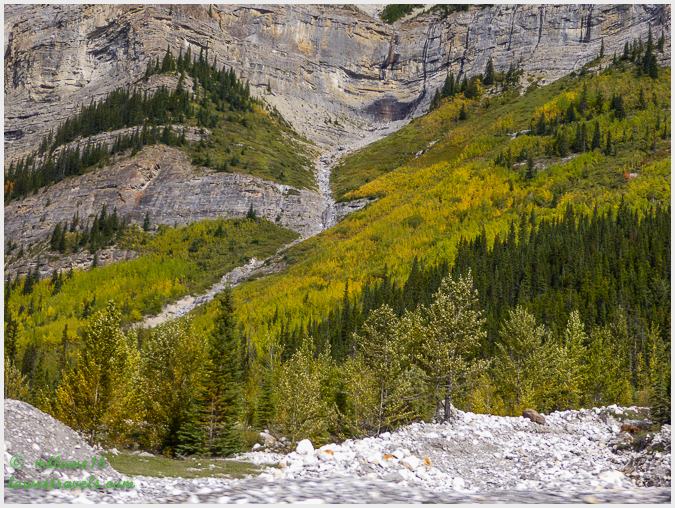 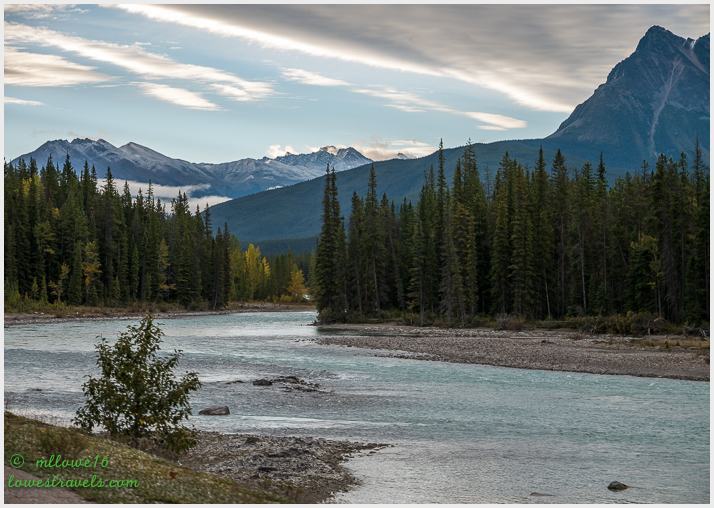 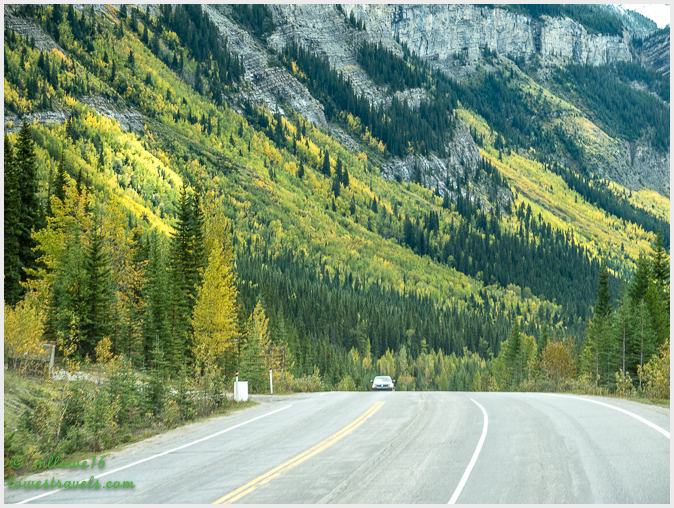 Columbia Icefield, the largest in the Canadian Rockies, is a surviving remnant of the thick ice mass that once mantled most of western Canada’s mountains.  Nearly three-quarters of the park’s highest peaks are located close to this ice field, and the area is the center of all glacial adventure.

One of the most popular tourist attractions is the trail to the toe of Athabasca Glacier.  It ‘s a short but steep hike that ends close to the edge of the receding glacier.

After that trek we crossed the parkway and visited the Columbia Icefield Discovery Center to learn more about the history of the parkway and the gradual recession of Athabasca Glacier.

One of the plaques mentioned that because of a warming climate, the Athabasca Glacier has been receding rapidly for the last 125 years.  Losing half its volume in that time, the shrinking glacier has left a moonscape of rocky moraines in its wake.  Below are photos from 1940 and Sept, 2016. 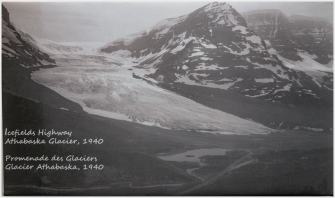 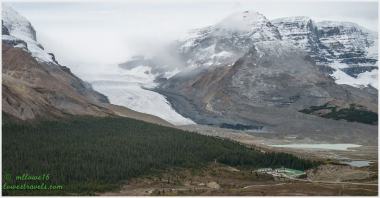 Further along the parkway was Wilcox Trail, where our hearts pounded as we climbed to the top of the ridge for a rewarding view: 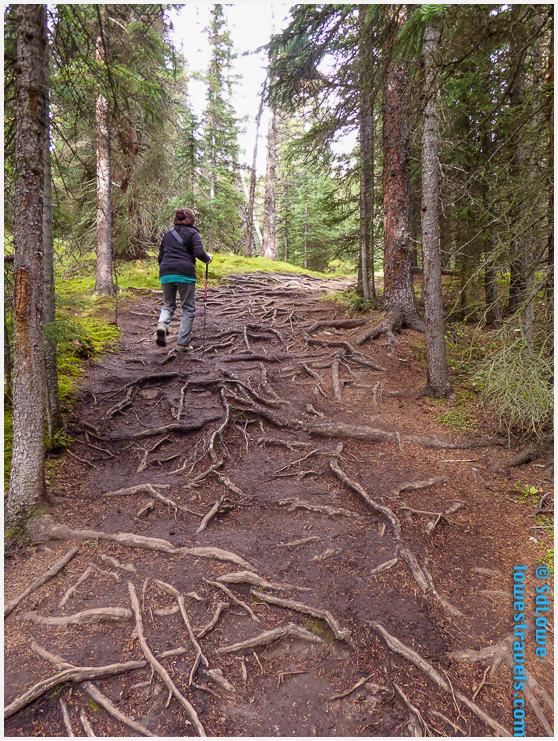 There are six pairs of red chairs scattered around Jasper National Park, but we’d found only two so far.

The Drive Back to Jasper 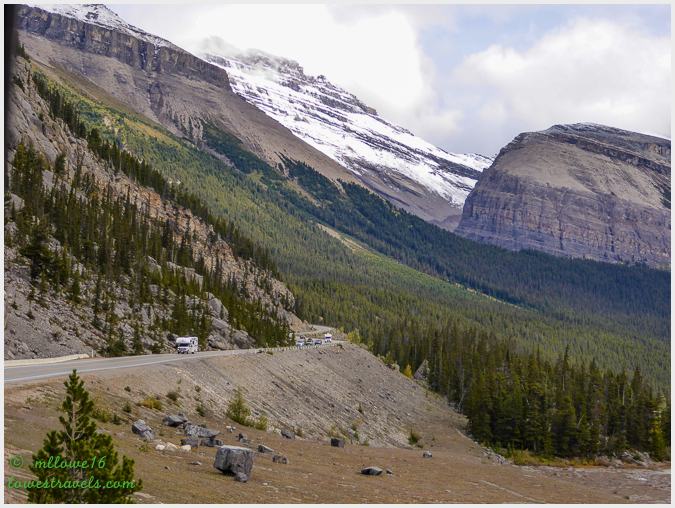 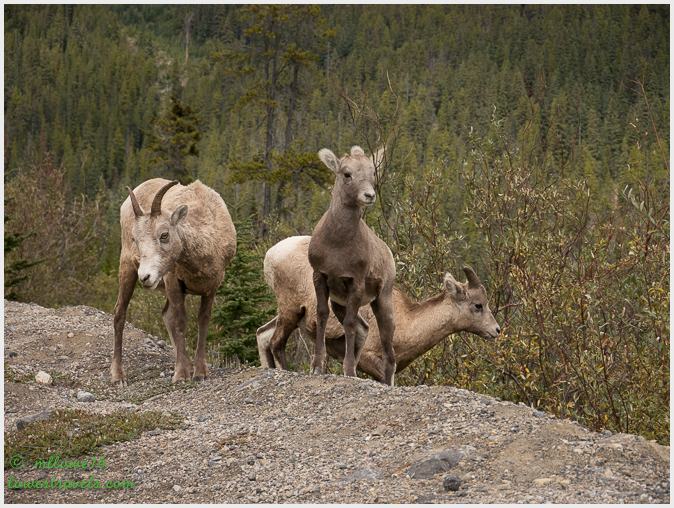 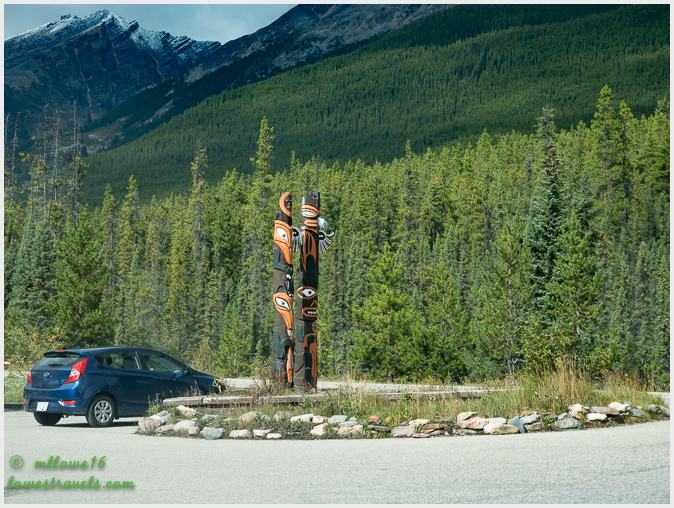 Sunwapta, meaning ‘turbulent water’ in Stoney native language, offers a drop of 60′ and is 30′ wide.

Off the parkway is the Valley of the Five Lakes, which was close to our campground.  We followed the long loop (6 mi) counterclockwise, passing five extremely clear lakes displaying shades of jade or blue, depending on their depth.

Rain was due the morning we hiked the trail, but thankfully we finished our trek before the skies opened up.  The lakes were amazing, and I’ll let the pictures speak for themselves:

We got a new perspective during this drive on the parkway, as it had snowed the previous night.  It added a beautiful dimension to the already breathtaking scenery. 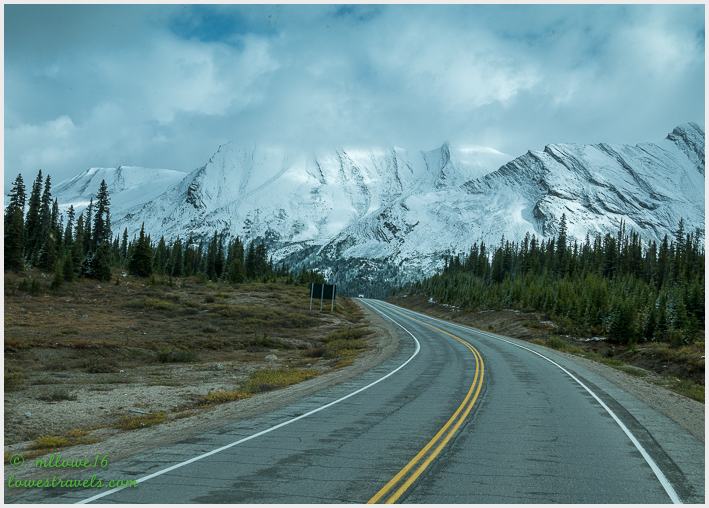 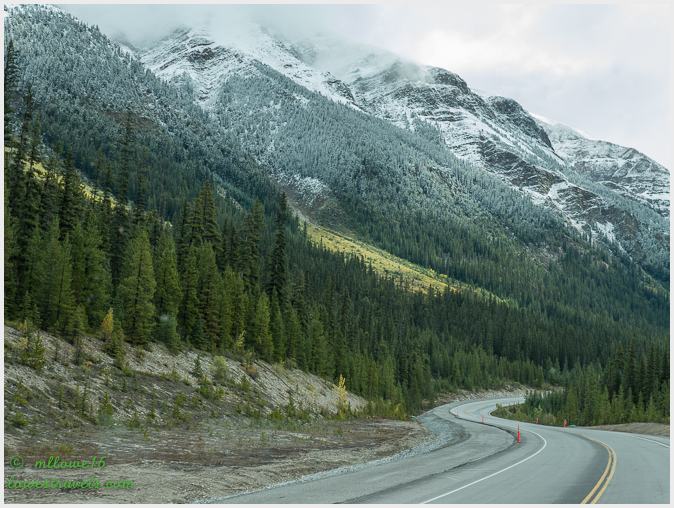 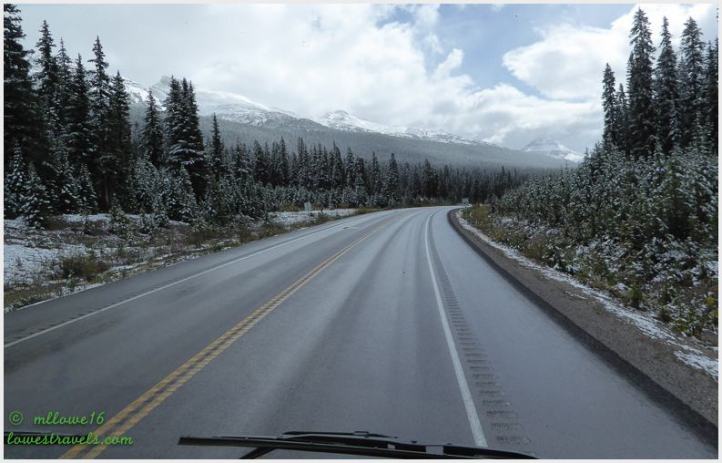 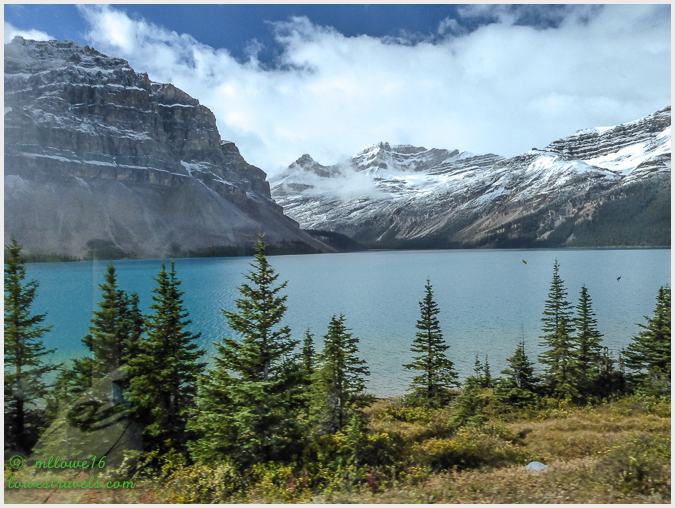 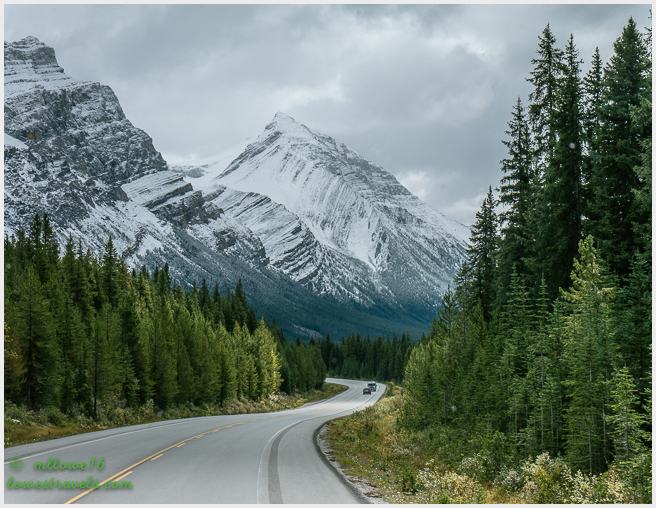 Approaching Lake Louise, we saw the “million dollar overpass”, built just for bear, elk and other wildlife that may want to cross the Trans-Canada Highway. 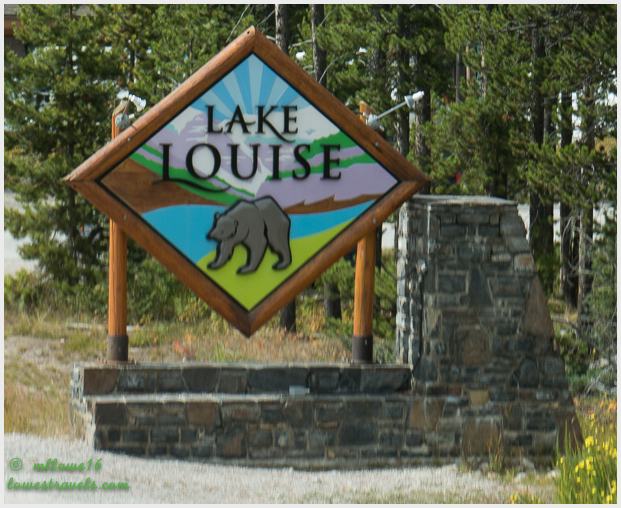 The drive along the Icefields Parkway was sensory overload, and one of the highlights of our Rocky Mountains adventures.  A visit to the Canadian Rockies would be incomplete without experiencing this captivating area.