Out of Red Rock Country and onward – Richfield, Utah

And wow, did we ever have a grand ten weeks experiencing all of them, each with their own unique and majestic beauty.  Although we were “seeing red” in the rocks all that time, we were left wonderstruck and longing for more.  We strongly recommend that anyone coming into the area visit as many of these parks as possible.  Click here to review my posts about them and our other stops in this beautiful state.

Leaving Bryce Canyon, we exited the land of red rocks and headed toward greener pastures and several snow-capped mountains.  Our next stop at Richfield, Utah allowed us to meet up with John and Pam, who were already set up at the KOA (Steve’s review here). Unbelievably, the Nimble Hiker had already planned a hike for the four of us at Fremont Indian State Park, about 20 miles from the campground.

Stopping at the museum, we learned about the Fremont people and how the largest known Fremont Indian Village at Five Finger Ridge was discovered during construction of Interstate 70.  Destroying many sites, bulldozers ran right through the heart of the village and uncovered over 100 dwellings and granaries.  It’s the greatest known concentration of Fremont dwellings in the world, and Fremont Indian State Park was established in an effort to preserve what remains.

The natives who lived in this area left an amazing concentration of their distinct rock art on the cliff walls.  We followed several trails that led us to them, but we all thought the Rim Trail hike looked interesting and challenging, and we wanted to check it out.

Permission from the park rangers was required for that hike. and although they granted us permission we arrived to discover it was a very hazardous climb and we decided to view the hundreds of petroglyphs from a distance through binoculars and zoom lenses.  No sense in risking injury just to get close to another bunch of petroglyphs! 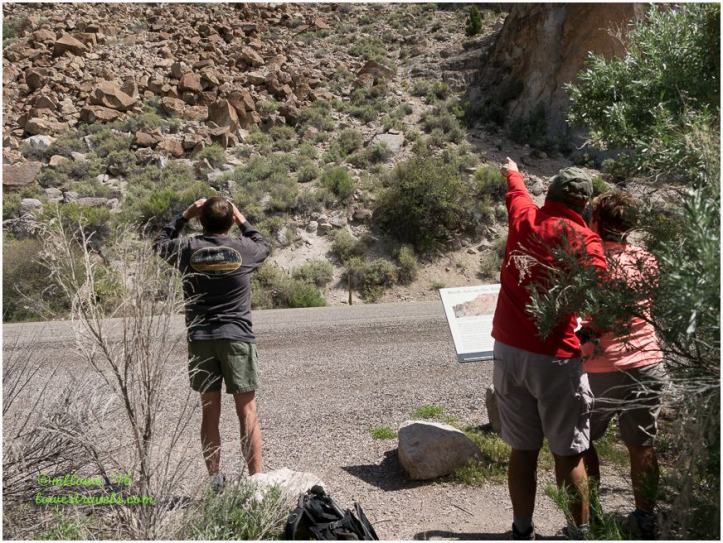 We continued our journey by criss-crossing several trails that lead us to many rock art panels, some visible from the frontage road and others requiring some hiking.  The park rangers lent us guides that explained the various petroglyphs we were viewing along the way.

The colorful wildflowers made the girls slow down for pictures:

The Fremont Indians left stories carved or painted on the canyon walls – tales of the hunt, shaman’s visions and initiation rites.  These petroglyphs and pictographs represent a graphic history that we don’t understand to this day.

The  written guides provided an interpretation of the panels by modern-day tribal members, but even they can provide only a guess of what the Fremont people were trying to convey way back then.

John and Pam moved on the following morning, and we stayed behind to just relax and kick back for a few days.