While driving and hiking to/from intriguing ancient ruins, we were constantly treated to amazing scenery all around.  We are after all in southern Utah, known for its dramatic sprawl of red rocks and geological splendor.  The diversity we witnessed kept my camera busy and us fascinated.

Let me show you the scenery, and hopefully you’ll be as taken in as we were.  I snapped most of these images from the passenger’s seat of our car, so the quality will suffer some for those shots.

Valley of the Gods

Known as the “miniature Monument Valley”, driving this 17-mile stretch off US 163 took us past many towering sandstone formations with fanciful names.  The Navajo interpret these imposing monoliths as Navajo warriors frozen in stone who can be appealed to for protection.

Although smaller in size than Monument Valley, the statuesque formations here are numerous and no less magnificent.

Of course, a formation can take on a different look, depending on your viewing angle.  For example, the formation below is named “Lady in Bathtub”, but as we continued past and gazed back, it looked more like a balanced rock.  Agree? 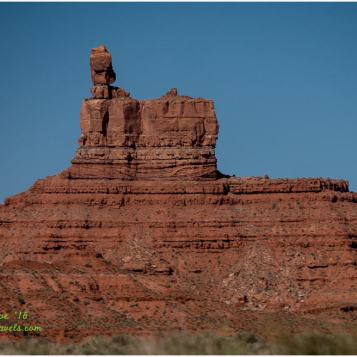 On one morning we drove through Moki Dugway, a 3-mile graded gravel switchback road carved into the cliff face of Cedar Mesa that winds 1,200’ from bottom to top.  The road was built in the 1950’s by Texas Zinc Minerals, as a route for ore trucks hauling uranium and vanadium from Cedar Mesa at the top of the dugway to the processing mill near Mexican Hat.

The views from the road and at several pullouts were breathtaking.  This is not a drive for those who have a fear of heights.  At one pullout we looked back and down at the Valley of the Gods we had just driven through:

Exiting Moki Dugway at the top of the mesa where the pavement ended, we followed a dirt road that went 5 miles west to Muley Point.  We took a break for lunch there and enjoyed the stunning panorama from a 1,200’ cliff.

Goosenecks of the San Juan River

From Muley Point we traveled back down through Moki Dugway to Hwy 261.  I had thought we’d be back in the lowlands at Goosenecks State Park, but no!  The elevation from there to the bottom of the San Juan River goosenecks was another 1,000’ drop into the eroded landscape.

From an overlook we could see the San Juan River’s sinuous path as it cut through multiple geologic layers.  This is the longest entrenched river meander in North America, which gives the small park its name.  We’d seen photos from friends who had camped here, and we were very happy to finaly see this beauty for ourselves.

Heading down Hwy 163 on our way home, we got a closer view of Raplee Anticline, also known as Mexican Blanket:

This strange sandstone formation was named for its “sombrero” or mexican hat appearance.  It caught our eye as we traveled along Hwy 163 toward Bluff:

Down the road a ways I caught a glimpse of what I named “Bakers Hats”:

Comb Ridge is a sandstone monocline, with a 1,000’ wall from the wash bottom to the top of the cliffs.  Tilted at an angle of almost 20º, it runs for 80 miles.  It was home to the Anasazi, or ancestral Puebloans, and its cliffs sheltered the inhabitants.  The comb’s springs and seeps provided water to them, while the back walls of its shady, hidden alcoves served as a canvas for their rock art.

Returning from Natural Bridges National Monument, we followed Hwy 95 to cut through the Comb Ridge on the west side.  It was nearing sunset when we passed through, and the cliff had taken on a soft glow as the setting sun hit it: 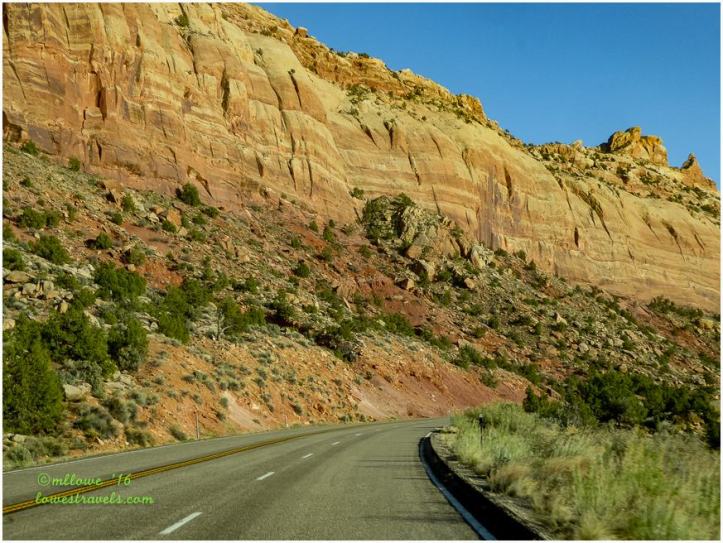 When not driving or hiking, our home base was at Cadillac Ranch RV Park (Steve’s review here), in the very small town of Bluff, Utah.  Right across the street was the Bluff Fort Historic Site, where we learned that this small town is rich in history.  It was founded by Mormon settlers, as 200 of them arrived here in April 1880 after an incredible and seemingly impossible 6-month journey.

We were shown a video that detailed how those Mormon pioneers overcame challenges of unparalleled difficulty, as they blazed a road through some of the most broken and rugged terrain in North America.  It included a path to the Colorado River gorge via a crevice they named Hole in the Rock.  They actually blasted a small road through the crevasse, a 2,000’ descent down to the Colorado River.

All of the drives we took during our stay in Bluff elicited the same exclamation as we traveled the area – “It’s a wow here!”