Our visit to the ancient cliff dwellings at Canyon de Chelly was my first exposure to the thousands of ancient ruins that abound throughout Arizona.  It’s not fully understood why ancient cultures left behind remnants of their pit houses, cliff dwellings, pueblos and other forms of housing.  The Anasazi’s tucked their homes into high overhangs in the dramatic walls of Canyon de Chelly National Monument, while the Sinagua people left their mark under the limestone overhangs at Walnut Canyon National Monument, our final stop on our road trip from Cottonwood.

Walnut Canyon National Monument’s name came from the Arizona Walnut, a tree once common in the canyon bottom.  Dams constructed upstream over the years have significantly decreased water flow through the canyon.  But more than 800 years before the water was impounded this canyon was home to its only permanent inhabitants, the Sinagua people.  Sinagua is spanish for “without water” – a tribute to their ability to turn a relatively dry place into a homeland.

From the visitor center’s overview we looked out and at first saw only a beautiful vegetation-covered canyon.  But a closer look revealed many ruins running along horizontal strips in the rock walls, as if someone could walk along a path on the wall to visit many dwellings in a row.  The canyon is sometimes called a “cliff city”, for there are more than 100 dwellings built along both sides. 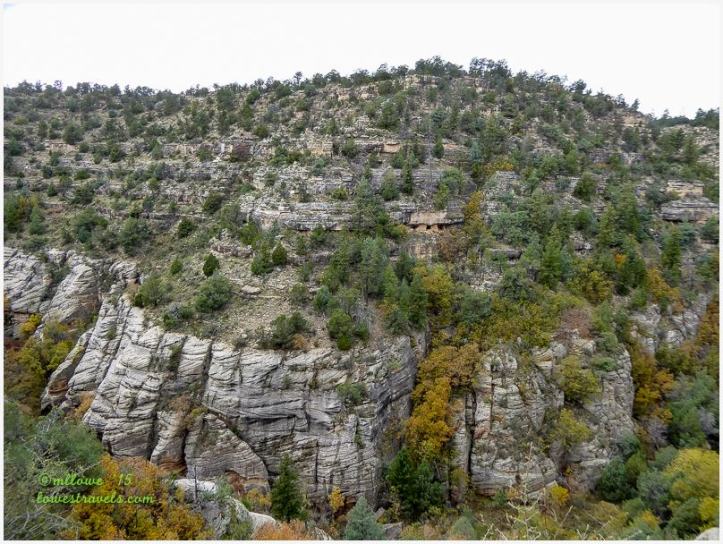 Archaelogists dated the cliff dwellings at between 1125 and 1250 AD.  The builders were believed to be the women of the tribe (men were the hunters and farmers), who took advantage of natural recesses in the limestone walls created by water that eroded softer rock layers.  Most dwellings face south and east to take maximum advantage of sunlight.

We were able to walk right up to about 30 dwellings as we followed the Island Trail.  After descending 240 steps from the visitor’s center, it looped around an “island mountain” formed by water that cut all around it.  The trail was a steep 200-foot descent/ascent at an elevation of 7,000 feet.  It lead past some of the best preserved – or, more accurately, least destroyed – ruins.  It also provided views of many other cliff dwellings constructed wherever a natural-occurring alcove could be found.

Observing the dwellings, we learned that the alcove provided a ready-made rear wall and roof, needing only side and front walls of masonry to form a totally protected structure. Carved by nature long ago, these alcoves offered residents an ideal location for home-building.  The masonry of the structures were strung end-to-end along the canyon walls, situated to take maximum advantage of the natural shelter provided by recesses in the cliffs. 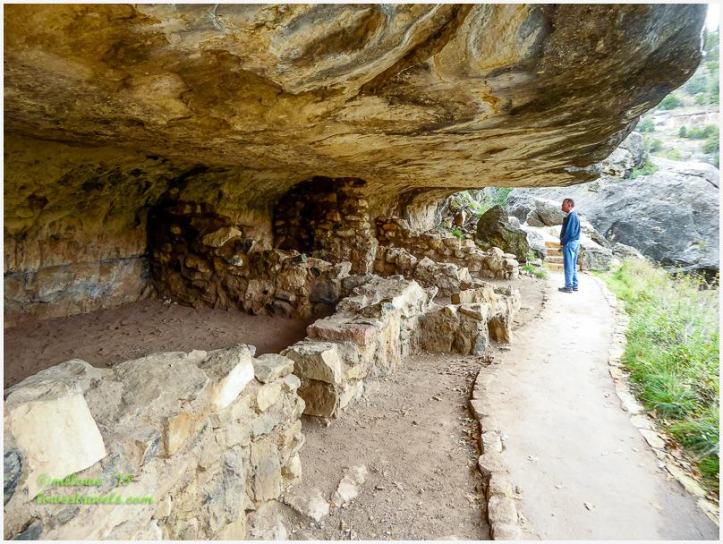 The dwellings have been either stabilized or restored, but original mortar remains in many walls. 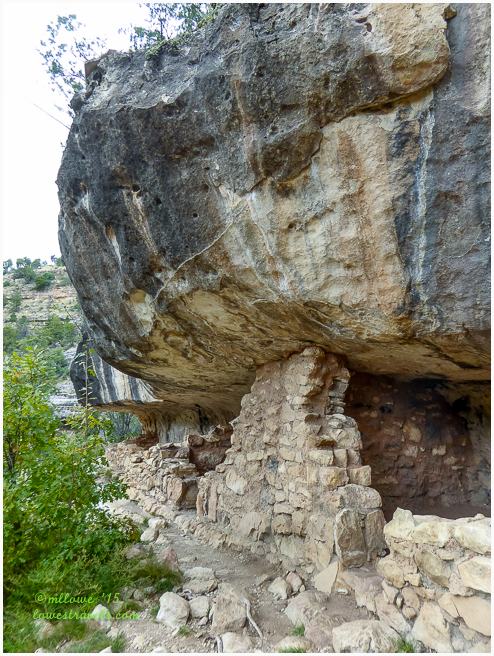 Like the Ancestral Puebloans in neighboring regions, the Sinagua people left mysteriously around 1250 AD.  The exodus may have been caused by drought or fear of neighboring tribes.  They certainly left us something to think about as we enjoyed this fascinating place!

Walnut Canyon may not be as spectacular as Canyon de Chelly, but the geology is captivating and unique.  We learned that the area is not volcanic and the rock walls were formed in three distinct layers.  The upper third contains Kaibab Limestone (marked #1 in the photo below), which varies in thickness and hardness.  The cliff dwellings are found within the steep, scrub-covered slopes of the Toroweap Formation, (#2) and the bottom third is the sheer-walled, cross-bedded Coconino Sandstone (#3).

The bottom Coconino Sandstone layer is the oldest, formed 275 millions years ago. Walnut Canyon started as a desert with sand dunes along a coast.  Winds blew from behind the dunes and avalanced down the front.  When the sea moved in, these ancient dunes were cemented together creating patterns of diagonal lines (or cross bedding) in the sandstone.  Many geologists believe the Coconino Sandstone was originally red in color but the iron leached out over time – converting the rock’s color to a creamy tan.

The alcove dwellers of Walnut Canyon may be lesser known, but their cliff dwellings are a study of their unique lives.  There are many ruins in the southwest that we still want to visit, but we’re glad we stopped to get a close-up view of these.  It was an interesting look into the past and how this particular group of people adapted to the land and their environment to survive and thrive.