I didn’t intend to post while Mona Liza was in the Philippines, really I didn’t.  Blogging is mainly her thing, I’m just the peon editor in this operation.  But after driving so many miles southward through mind-blowingly beautiful western Colorado, I’m inspired to at least take down some notes about the beauty here, if for no other reason than as a reference for when we plan our trip back.  And we will be back during fall of another year!

I’ll skip the background detail that my honey does so well, and just try to give a feel for what I experienced here.  Since I’m not comfortable using her “super-cam” camera (as I call it), and she took our other camera with her, I bought a little Nikon camera to use while she’s away.  That means you won’t see the quality of her photos here, but you’ll get the idea.

Mona Liza’s last-minute flight was scheduled for the day we were due to leave Fruita, CO for Ridgway.  After dropping her off at the airport in Grand Junction at 5:00am, I went back to Betsy and had coffee before hooking up the car for my solo drive to Ridgway State Park (my review here).

Heading southeast on highway 50, I discovered that a portion of it had a lot of large dips in the road, although the road surface itself was smooth.  That forced me to slow down a bit, or be faced with picking things up off the floor upon arrival at Ridgway.  But it wasn’t really a tough drive, just long and quiet without my cute little navigator/photographer next to me.

The two things we had planned to do while at Ridgway were to drive the Million Dollar Highway, and to check out the Black Canyon of the Gunnison National Park.  I’m very glad I decided to stick to those plans even though I was alone.

Sorry to have Mona Liza see these photos, but this was perhaps the most amazing stretch of highway I’ve driven during our journey, not just because of the geology, but the fall colors were blasting me from all sides!  I determined that Betsy could have made it, but it would have been brutal not only because of the turns, but also due to the ascents to passes exceeding 11,000 ft.

The drive from Ridgway to Durango, my next stop, was only 80 miles via the MDH.  But while driving it in the car I quickly decided to take the 150-mile trip around to the west, which was fairly challenging in itself and included a climb to over 10,000 ft.  I did see one large motorhome on the MDH during my trek, and the driver’s eyes were bulging out in such a way as to help finalize my decision.  In my opinion, this is not a place for large RV’s! 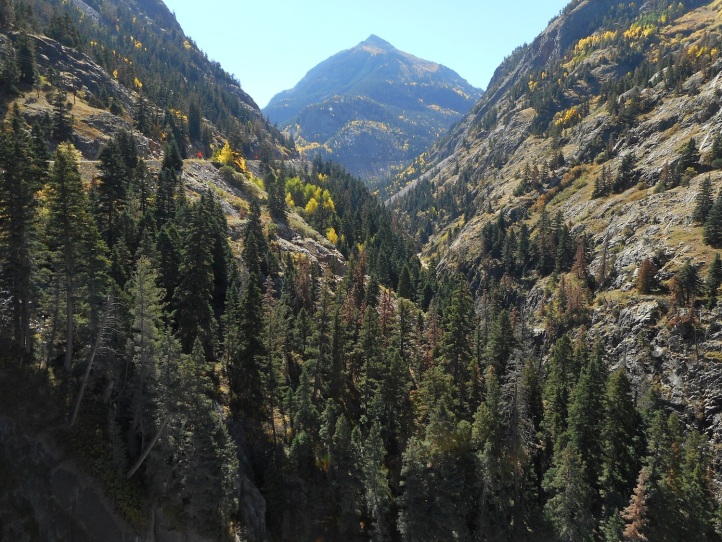 Black Canyon of the Gunnison –

Wow, what a wonderful surprise this place was!  I arrived at the park about the same time the sun did, and although the fall colors aren’t prevalent here, the amazing granite canyons are about as stunning as I’ve seen anywhere – some towering 2,300 ft. above the river below.

My little camera was tested as each overlook showed a new gorge in the maze of canyons, and of course my feeble attempts at photography don’t do it justice.  The road actually runs a ways away from the rim of the canyon, so each stop involves a short to medium walk to the rim – providing a decent amount of exercise if all stops are made – and I didn’t miss any of them. 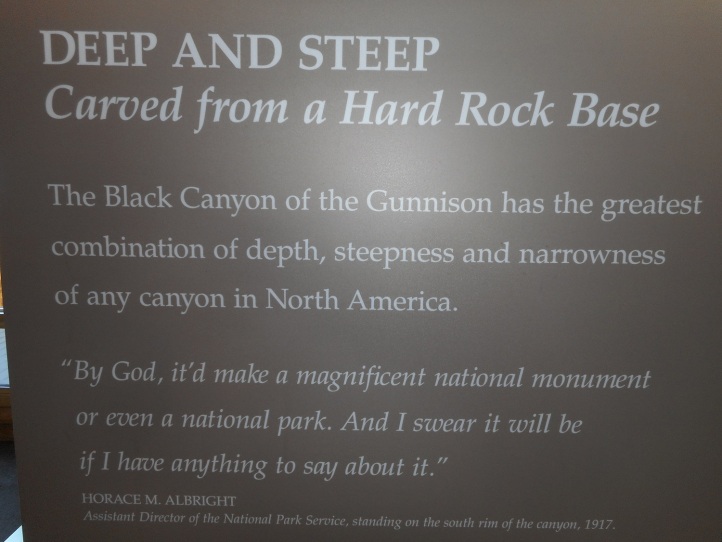 The canyon has north and south rim roads, and I took the south rim as most people seemed to and stopped at all 12 overlooks.  It was about 16 miles one-way into the park on the main road, and there were places to have lunch at the picnic tables or to take a hike, in case walking to the rim 12 times wasn’t enough. 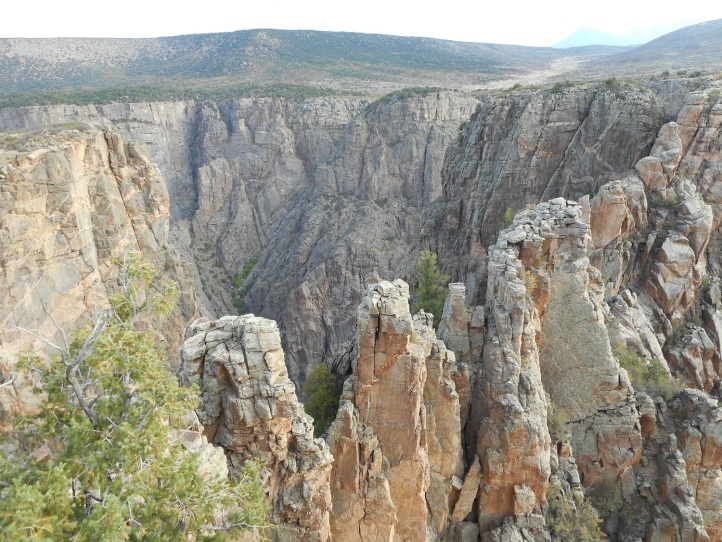 There were also lots of birds here – sorry again Mona Liza!  Birds, schmirds – I was here to look at massive granite walls!  A wonderful place not to be missed if you’re in the area, and either of the rim roads can be enjoyed comfortably in a half day.  It’s quite a drive from one rim road to the other, as there is no bridge across, so plan on a full day if you want to travel both roads.

That’s about all I had time for during my stop at Ridgway.  I had a few items to attend to on the coach, and some recipes to try out in the kitchen before moving on to Durango.  As I mentioned, the drive there was challenging mountain driving, but the fall colors kept my spirits high when I had a chance to look at them. This state is quickly moving up my list of favorites!