We’re back in Colorado, and this time we’ll hang around the central and western areas of the state until the threat of nasty weather runs us off to warmer grounds.  The first time we stayed in Colorado last spring we were enthralled with the beautiful scenery around us, and the many iconic outdoor places to explore and visit.

On the current migration toward our southern winter destination we’re climbing over the Rockies on I-70.  Our first stop includes a long-anticipated visit to Rocky Mountain National Park (RMNP).

A 5:30am wakeup at our home base at Boyd Lake State Park in Loveland gave us an early start toward RMNP, which allowed us to avoid the crowds for several hours.  Leaving before sunrise also rewarded us with an alpenglow as the sun slowly rose to awaken the sleeping giants: 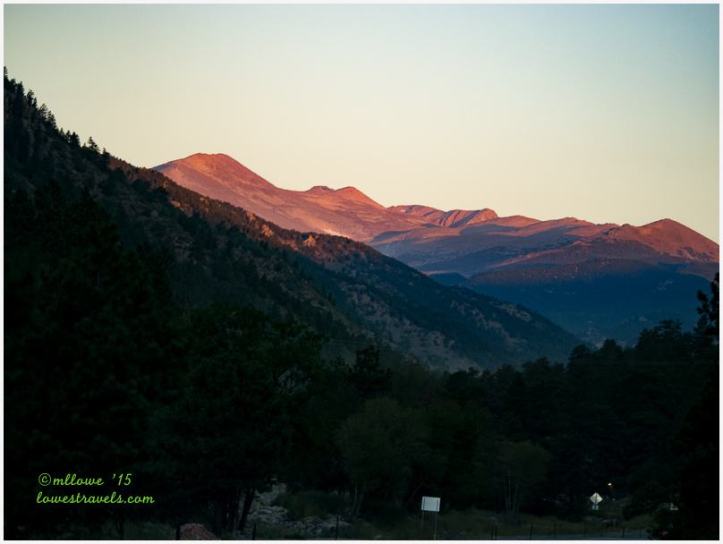 Some 4-legged morning greeters were on hand as we entered the park:

Rising over 14,000 feet at many points, the Rocky Mountain Range stretches between the United States and Canada forming one of the worlds longest mountain ranges.  Rocky Mountain National Park preserves a respectable 415 square miles of breathtaking scenery.

With only a day to explore, we had to drive the road to the sky – the Trail Ridge Road. This is the highest continuous paved road in the United States, and it traverses upward from forests and meadows to stunning views of the spectacular Rocky Mountain Range.

Although we’ve been at higher elevations in the Sierra’s, it was exciting to drive over the summit here at 12,183 feet.

There were pullouts that allowed us to stop and take in a broad landscape of rugged beauty, and to be awed with the enormity of these mountains.

Two hiking trails from the road provided us with sweeping views of the mountains; the Alpine Ridge trail and Tundra Communities trail.

The Alpine Visitor Center sits more than two miles above sea level and is self-contained, with no phone lines or utilities to connect it to the outside world.  It’s open only 5 months a year, and it uses a diesel generator to supply power, treated melted snow for drinking water and sewage is hauled away daily by truck to a local treatment facility.  Rangers fondly call it “an island in the sky.”

Along the road, wild animals big and small couldn’t care less if they caused a traffic jam – this is their territory, after all.

The Tundra Communities trail began at an elevation of 12,050′ and gained 260 feet of elevation.  The area is known as the “Rooftop of the Rockies, the land of fierce extremes.” Only tundra-conditioned plants and animals can survive in this environment.

A plaque along the trail described the alpine tundra of RMNP as vast, covering nearly a third of the park.  It’s only here where one can observe and enjoy the community of highly specialized species up close. 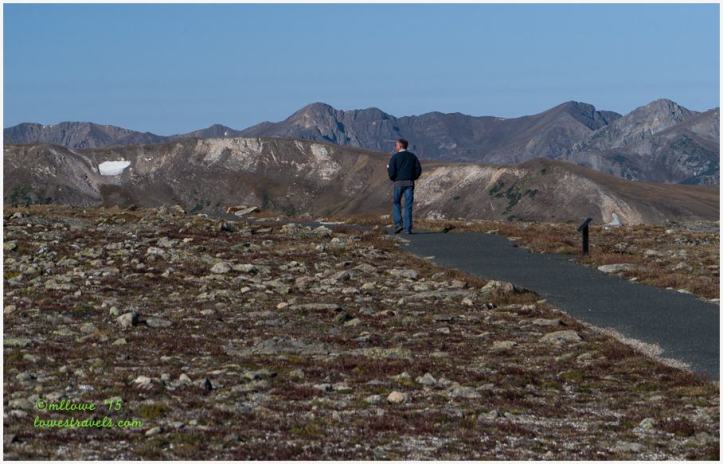 Here are some of the species we saw that are able to adapt and thrive in the harsh winter conditions:

By noon things were getting busy, with few places to park our car.  And this was after Labor Day on a weekday!  We were able to find a good lunch spot at Lake Irene, where I captured some beautiful summer flowers on perhaps their last blooming days of the year: 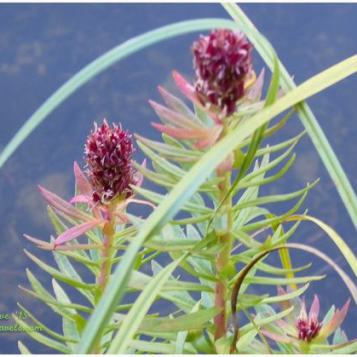 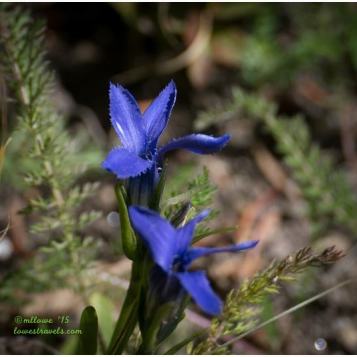 We reached the western end of Trail Ridge Road and cruised through the quaint resort town of Grand Lake after lunch, then turned around for the long haul back home.  We stopped briefly to get a capture of yet another lake surrounded by mountains:

We were unable to park at Poudre Lake near the Continental Divide, so I just snapped a shot as we went by:

The first pine tree infestations we’ve seen were in the Black Hills of South Dakota, and it’s a major problem here as well.  It seems that Mountain Pine Beetles are killing pine and spruce trees throughout the Rocky Mountains, and it’s a growing epidemic.  On a lighter note these dead trees actually gave a bluish hue to the mountains from a distance, mixing with the green of the live trees:

We got just a taste of Rocky Mountain National Park.  It was a long day and we wished we were staying nearer to the park so we could get in some more serious hiking on the trails there. No question, this is a place we’d be happy to come back to and spend a lot more time.

With winter just around the corner, these massive mountains will soon be covered in snow for several months – we wish we could see that!