Getting busy in Bismarck, ND

It was a bit of a letdown when we arrived at our super-tight and dusty campground near Bismarck, after seeing all of the fantastic open farmland during the drive to get there.  It seems many of the RV parks in this part of the country are heavily used by seasonal workers, and are definitely not “destination” parks.  But rather than complain about the place (which Steve did here), we got busy exploring the sights and attractions around Bismarck. 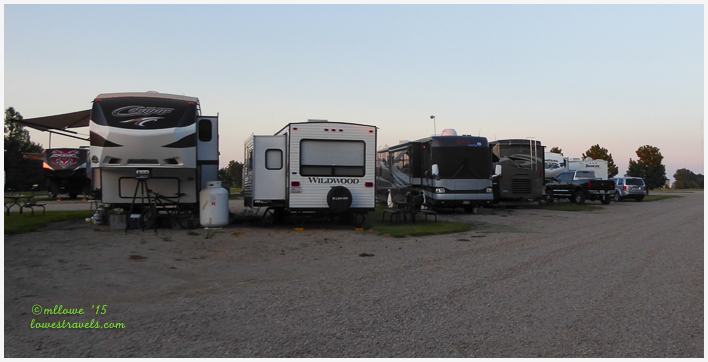 This state park has three big historical stories to tell.  First, the Mandan Nation, an agricultural Indian tribe, lived here from 1575 to 1781.  Their “On-a-Slant Village” is described as a planned community set above the floodplain on the west bank of the Missouri River.  It was named because of its slope toward the river, and at least 86 round earthen lodges were discovered here in the late 1800’s.

When Lewis and Clark arrived in 1804, the village had been abandoned due to multiple smallpox epidemics and attacks by other Indian tribes.  The existing reconstructed earthen lodges provided a realistic backdrop on which to learn about the Mandan lifestyle and culture. 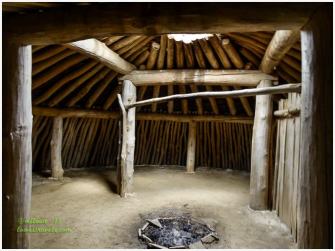 Inside one of the earthen structures 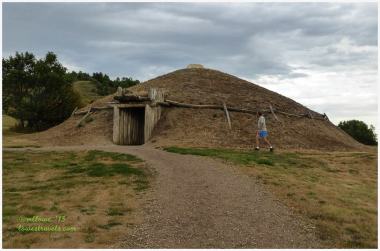 Checking out the exterior

Next, in 1872, an infantry post was built atop a hill overlooking the Mandan village. Designated as Fort McKeen, it was established on the Missouri River bluff to protect surveyors and work crews from indian attacks.  Blockhouses and cornerstones of foundations mark the locations of buildings on the fort.

A year later a cavalry post was built on the flats below, and the fort was renamed Fort Abraham Lincoln.  Its most famous resident was Lt. Col. George Custer.  By 188o the fort’s importance declined and it was abandoned and dismantled.  We missed the tour of the Custer House during our visit, but were able to walk around it to admire the work of the Civilian Conservation Corps (CCC) in rebuilding it.

The third story describes how the (CCC) came in during the 1930’s to begin restoration of this important historical site.  They reconstructed a portion of the earthen lodges at their original locations, and rebuilt several buildings making up the Cavalry Square, including the Custer home.  At the heart of the state park is also the beautiful museum which the CCC built as well. 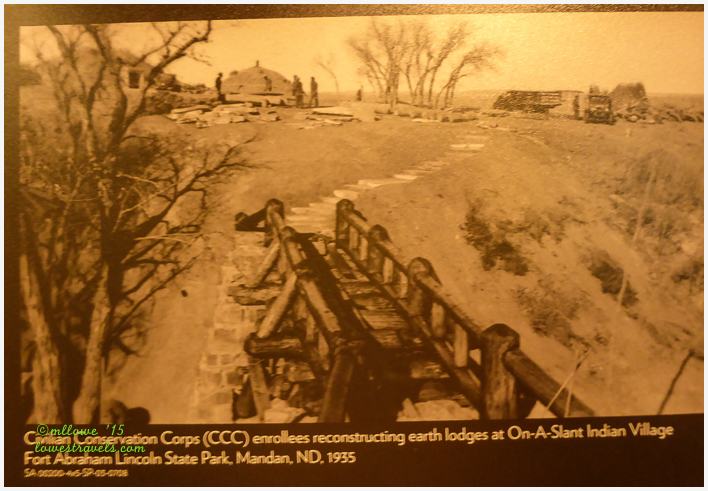 This is our third capitol building visit, and we were excited to learn how the North Dakotans built theirs.  The capitol is also known as the “Skyscraper on the Prairie,” for it stands proudly in the heart of Bismarck with no other buildings even coming close to its 18 floors.

Our tour guide talked about the colorful history of the building.  The first one built in 1883 burned down due to oily rags in a janitor’s closet.  A $2 million limit was set for reconstruction of the building.  The tight budget caused a disruption when the laborers went on strike, demanding a pay raise from 30 cents to 50 cents an hour.  Martial law was then declared and National Guards were posted to maintain order.  The building was finally completed in 1934 and occupied in 1935.

The guide also told us the state’s claim to fame is being listed in the Guinness Book of World Records, for on Feb 17, 2007, 8,962 North Dakotans became snow angels outside the capitol building.

But on this summer day we saw only green on the grounds, as viewed from the 18th floor observation deck.  This floor has both modern and historical displays of the capitol and its history, and on this very clear day we had a 35-mile view of Bismarck and the surrounding area in all directions. 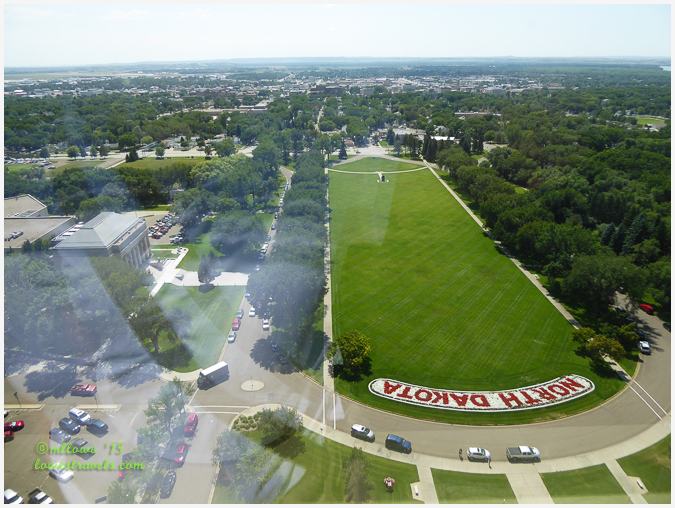 We were wowed when we entered the state museum – first of all because it’s free! – and secondly because it was sort of a “mini-Smithsonian” museum for the state.  It tells the stories of North Dakota from its earliest geologic formation to more current times.  It was recently reopened after a year of renovation which cost $52 million, and it’s the only museum of its kind between Minneapolis and Seattle.

One display contained the mummified remains of a duck-billed hadrosaur nicknamed “Dakota,” one of the rarest collections of dinosaur fossils ever found.  It was located in Marmarth, North Dakota in 1999.  I was fascinated by the overviews explaining how this dinosaur was found, and the process of getting it out of the Badlands and to the museum.

This museum is definitely worth checking out if you happen to be passing through the Bismarck area.

Lastly, we were happy to find some nice walking/biking trails that ran along the Missouri River in Bismarck.  Like several of the cities in this part of the country we have visited recently, Bismarck has dedicated a lot of land to open space for public use, including miles of trails.  Way to go! 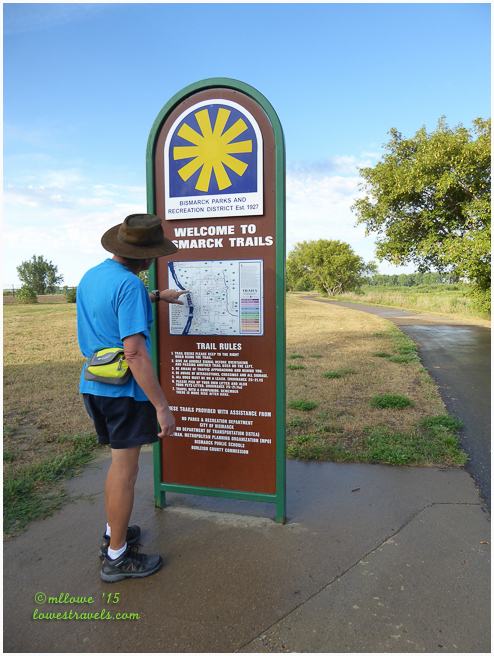