A day in the mile-high city – Denver, Colorado

All of our prior visits to Denver were confined to either the old or new international airports, waiting for connecting flights across the nation.  Now we were just a few miles from the city and had to make a thorough visit.  Our home base at Dakota Ridge RV Park (see Steve’s review here) was conveniently located only a short walk from the “W” line light rail station, so with afternoon thunderstorms a daily event in the area we caught an early train into the mile-high city.

Denver has been identified as the Mile-High City because its official elevation is right at one mile (5,280 ft.) above sea level. Because of that I had always thought the city was located in the mountains, but it’s actually 12 miles east of the front range of the Rockies, which dominate the views.  The picturesque mountain panorama near Denver is 140 miles long, and those mountains helped spawn many nasty thunderstorms that we endured during our visit.

Like any other metropolitan city, there are many attractions to see and things to do, but our day was dependent on how far our two feet could take us in the time we had.  It was a long day, and I thought I’d try to share what grabbed our attention without boring you all to death.

Our initial stop was near the hub of the light rail system, the newly-renovated Union Station which is Denver’s transportation center.

We continued our stroll around the Union Station historic neighborhood and saw a few buildings that are registered in the National Historic Register.  The  huge Icehouse Building was a functional cold storage warehouse continuously for eighty years.  Being in an ideal location near Union Station, it has been repurposed as a tavern and apartment loft. 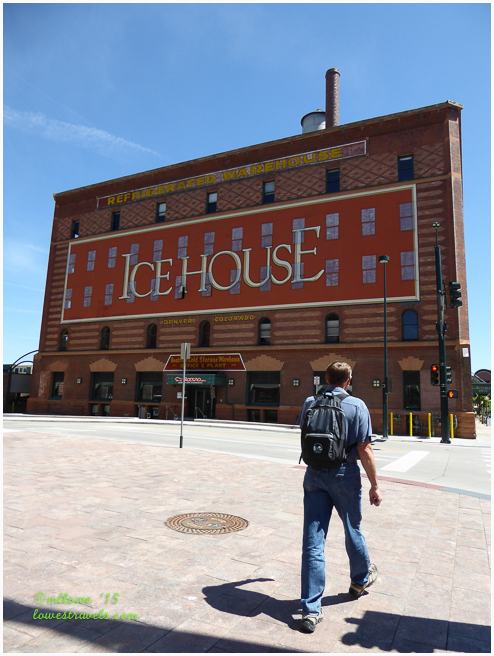 With no baseball game that day, the area around Coors Field was totally quiet – perfect!

We visited Larimer Square, the oldest and most historic block in the city.  In the 1850s, representatives from various area settlements got together over a barrel of whiskey and decided to consolidate their resources.  The city would be named Denver, adopted from James Denver, the Kansas Territorial Governor at the time.  Today, Larimer Square is one of the most stylish shopping areas in the city. 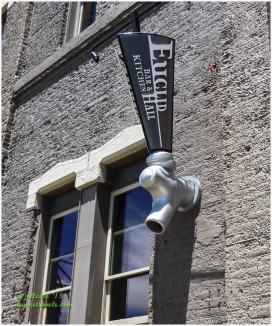 Can you guess what this store is selling?

Next we strolled through the 16th Street Mall, a mile-long pedestrian promenade lined with trees, outdoor cafes and retail shops.  We found the area to be a bit seedy, with all kinds of characters walking around.

Two things made us pause there, though.  One was Steve’s stop for his favorite driving snack – jerky.  He’s been on a long quest for the ultimate jerky, and is now considering trying to make his own.  Anyone out there have an excellent recipe he can use once he gets his dehydrator?

Our second stop was near the north end of 16th street, where I had noticed one of several colorful pianos in the middle of the street.  Of course, I sat down for a pose and to make a musical moment of my own.  But my piano-playing days are in the past and I quickly gave up.

I later learned that these brightly painted upright pianos are a part of Your Keys to the City, a public piano art program created by the Downtown Denver Business Improvement District.  It’s the first time we had seen an outdoor public place where anyone can sit down to play a piano and enjoy the moment – cool! 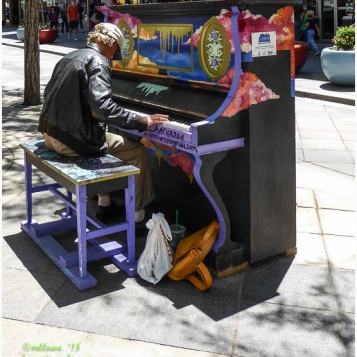 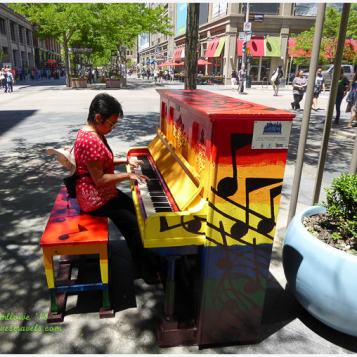 We ambled into a beautiful stone church building that seemed to be engulfed by a high-rise next door.  It was quite an unusual sight to see a church overshadowed by a tall modern building.  The church was built first in 1940, and as Denver grew the preservation of the Holy Catholic Church was a priority.  So the new skyscraper was designed in a unique triangular shape that encircles a large section of the church, but it doesn’t disturb any part of its structure.

This church’s history indicates 300 tons of Colorado colocreme travertine marble cover its wall and columns, making it the largest collection of this stone in the United States.

A bit of a trek north and over the South Platte River on a pedestrian walkway took us to the giant flagship REI store.  I spent about an hour shopping for hiking goodies while Steve mostly admired the architecture of the huge brick building.

Here’s something unique to some cities in the state of Colorado:

After several miles on our personal walking tour we got downright thirsty.  We picked the Tavern-Downtown with its rooftop patio to resolve the issue.  It overlooks Coors Field, and on such a gorgeous day we couldn’t help but do some people-watching.

Finally, we hopped back on the light rail so we’d make our much-anticipated dinner reservation at the historic Buckhorn Exchange Steakhouse.  Located on the southwestern side of town, it’s Denver’s oldest restaurant and offers an unusual array of delicacies.

This restaurant has been in business since 1893 in a standalone brick building.  The place oozes saloon ambiance, and the walls are adorned with a collection of over 500 mounted animals and trophy heads of every description.  Bears, birds, mountain lions, elk – even a two-headed calf are on display.  Antiques, firearms and western collectibles cover every remaining inch of the walls, and patrons are encouraged to look around and take pictures.

The draw here, as it was over a century ago, is the game-centric menu.  As an appetizer we ordered the grilled rattlesnake over a spicy cream cheese sauce – wow, was it yummy!  My entree was buffalo rib eye, while Steve devoured a buffalo prime rib.  He said it was one of the best pieces of meat he had ever tasted.

With our tummies satisfied and our legs weary after walking over 13 miles, we hopped back on the light rail and headed back to Golden.

As usual, there were many more things to see and do in Denver, but we were happy with what we covered during our long day.  And that wraps up our extended stay in Colorado!