Our final fun-filled outings at Big Bend Ranch State Park put a cap on our wonderful time in the Big Bend area.

Staying on the west side of the Big Bend area at BJ’s RV Park, we were smack between the national and state parks.  It was only about a 20-minute drive to the border of the biggest state park in Texas, Big Bend Ranch State Park.

This park occupies 300,000 largely wilderness acres bordering on the Rio Grande.  Big Bend Ranch was a working ranch for more than 100 years until its sale to the state of Texas in 1988.  The state park is managed very differently from the nearby national park in one significant way – the state park encompasses a network of cattle ranches operated according to the principles of the open range.  A herd of longhorn cattle grazes the area, and it’s host to a semi-annual longhorn roundup.

For more history of the park click here.   Much of it is very wild and rugged, and River Road (FM170) is the only paved road through it.  All interior roads must be accessed by trail or high-clearance/4×4 vehicles.

Folks seeking either high adventure or relaxation and solitude would find this park desirable.  Our plans were on the adventurous side, and called for driving the River Road and flying over the area on a guided air tour.

Just like its big sister, Big Bend NP, the state park has an extensive frontage on the Rio Grande.  For over 30 miles, the River Road twists and turns with the Rio Grande – crossing arroyos, climbing mountains and hugging canyon walls.

Each turn in the road was filled with spectacular scenery, and there were many turns!  The scenic section of FM170 runs between the towns of Lajitas and Presidio.

As mentioned in a previous post, our timing was perfect for viewing the intermingled bluebonnets and yellow flowers lining the road – a colorful carpet that took our breath away.

Millions of years ago, volcanic activity left a kaleidoscope of exposed geology here.  Park brochures describe the Big Bend Ranch area as being at the crossroads of geology; all four major geological events that shaped North America beginning over 500+ million years ago converged here and are represented in the park.  Click here to learn more about the fascinating geology that shaped the park. 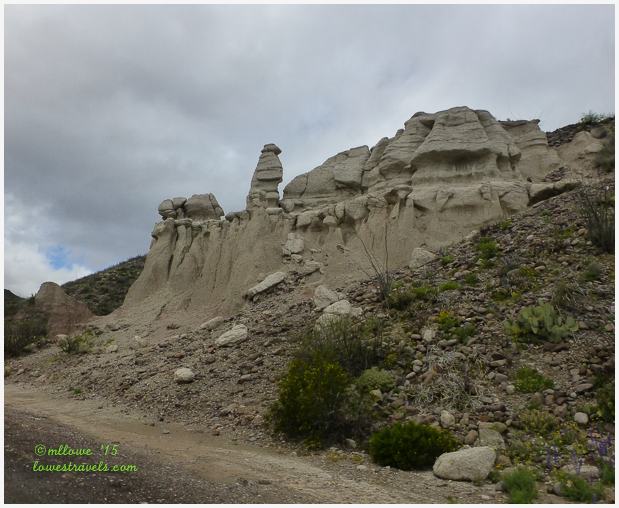 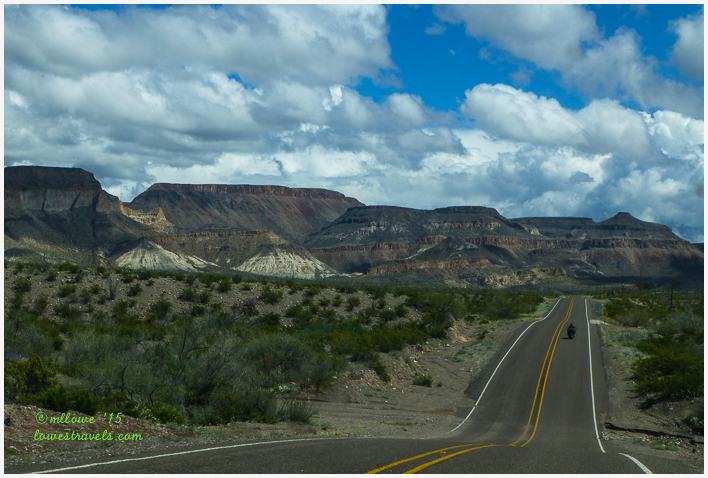 We hustled home after several hours spent soaking up the scenery and looking back in geologic time.  The day’s forecast had called for thunderstorms, and amazingly the weather folks got it right this time!  The rain came down hard and fast, and we kept moving so as to avoid getting stuck at one of the washes that were quickly filling the low spots in the road.

If you happen to visit Big Bend National Park, be sure to spend a few hours driving the scenic road through Big Bend State Park.  You won’t be disappointed!

We had tried to book a flight over the area well in advance of our arrival, but the spring break crowd had filled the schedule at Rio Aviation through the month of March.  The one-man, one-aircraft tour company was based right up the road from us in Terlingua, and Steve even went to the airport to beg the pilot to call us at any time if he had a cancellation and we would be there.  Well, the previous day’s thunderstorm turned out to be a blessing for us, as one of the customers was unable to re-book his tour.  Steve’s begging had paid off!

Climbing aboard Marcos’s Cessna 205 made both of us recall our many flying adventures when Steve was actively flying.  We were interested to learn that our pilot/tour guide Marcos Paredes was a local, and a retired National Park Ranger.  Listening to him while trying to snap pictures of the things he pointed out to us became quite a challenge.

The unobstructed view of the region’s geology was amazing.  We learned even more about the powerful processes that had created all this beauty.

Our flight took us over a lot of Big Bend Ranch State Park, the Devil’s Playground, Santa Elena Canyon, Closed Canyon, Colorado Canyon, and even a ways into Mexican airspace.  It seems the Air Traffic Control folks here all know Marcos, and told him to don’t even bother calling them if he wants to fly a little ways over the border – cool!

The first images below are views of Santa Elena and Closed canyons, which we had already hiked (click here for that posting).  Before the storm we had been able to walk across Terlingua Creek to the Santa Elena Canyon trailhead, but now we noticed that the creek had filled – shutting down that hike.

That gouge in the mountain below is Closed Canyon, with the River Road running along this side of the mountain range and the Rio Grande on the far side. 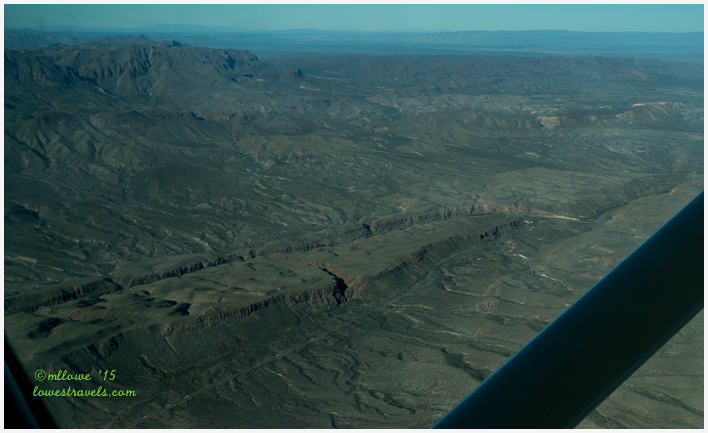 Marcos continued our lesson by telling us that between 1900-1940 the Mercury Mines were booming in the Terlingua area.  Mercury (or quicksilver) is derived from a red-colored ore known as cinnabar, which was discovered here.  As you may recall from my story about the pictographs in Seminole Canyon, cinnabar was used by the ancient natives as a durable pigment in their drawings.

But the signature feature of the state park is El Solitario.  It’s a large collapsed and eroded volcanic dome about 10 miles across.  A closer look at it can be had from the Solitario overlook, if you have a high-clearance vehicle to get there. Check my header  for a wider view.

We flew over the Devils Playground, a secluded natural wonder.  Marcos told us this is a research site for the University of Texas, no public access allowed.  I was wishing he’d fly a bit lower over it, but I got the best shots I could.  It kind of has an other-worldly look, doesn’t it?

Zooming over another area, we were amazed to see these red hoodoos, razor blade dikes, mesas and red canyons with enigmatic shapes.

Having a local to show us around gave us yet another perspective on the area, and Marcos provided plenty of details about the geology and local history during our one-hour flight. We highly recommend this trip, but reserve early!

The flight was a great ending to our fantastic week in the Big Bend area.  There were no relaxing days here, but we loved every minute of exploring and learning, and we didn’t want to miss a thing.