Driving into Devils Den State Park was yet another adventure on curvy narrow roads, deep into the valleys of the rugged Boston Mountains of Arkansas.  Since we traveled only 25 miles south of our previous stop in Fayetteville, we didn’t bother hooking up the car and I followed Betsy and captured her low-speed journey down the winding roads.

It was another challenging drive, but once we settled in and looked around we found that our site was super-spacious (Steve’s review of the campground is here).  We were ecstatic when we saw that our new backyard was a wooded area with a creek and several trails just a few steps away.  In these beautiful surroundings the lack of internet and phone connectivity was not a big deal, and hitting the trails became foremost on our agenda.

The brochure given to us at registration indicated that the name Devils Den was derived from  a rugged series of bluffs, caves, crevices and rock formations.This park encompasses the largest sandstone crevice area in the United States.  What I find strange is why the word “Devil” is used to name a place such as  Devils Lake in Baraboo, Wisconsin, or the Devils Tower in Wyoming or Devils River in Texas! Why not “Angel” or something else more serene?

But I digress – we came here to enjoy what Devil’s Den State Park is best known for, its natural history and the mountains that come alive with color during fall.  We arrived a little too early for the prime fall foliage, but we cherished what we saw as we hiked throughout the area.

The crevice caves (as opposed to limestone caves), ravines and crevices were partly formed by slippage in sandstone formations.  Large fractures occurred, then slid and cracked apart forming interconnected crevices that are littered throughout the valley.  The park named these fractures or shapes as Devils Amphitheater, Devils Icebox, Devils Cave and the whole area as Devils Den.  And to see these natural wonders we followed the 1.5-mile self-guided Devils Trail, which led us through this fascinating area that gave the park its name.  The hike was moderately difficult, rocky and steep in places.  Geologists consider this area a unique part of the Ozark’s Boston Mountains. 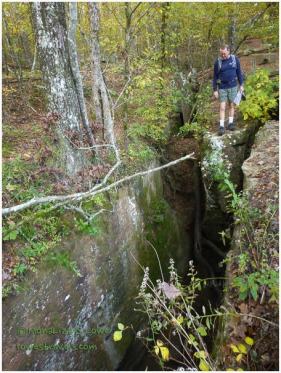 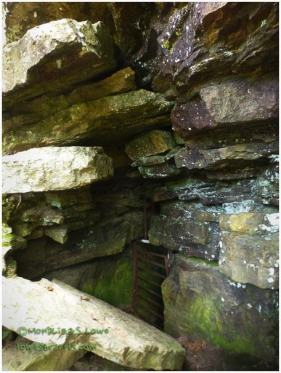 Another trail we followed was the Yellow Rock Trail, a 3-mile lollipop loop that took us into oak-hickory hardwood forest – typical in the Ozarks.  Although the brilliant autumn hues were not at their optimum, the leaves along the trail were changing and showed some wonderful colors. 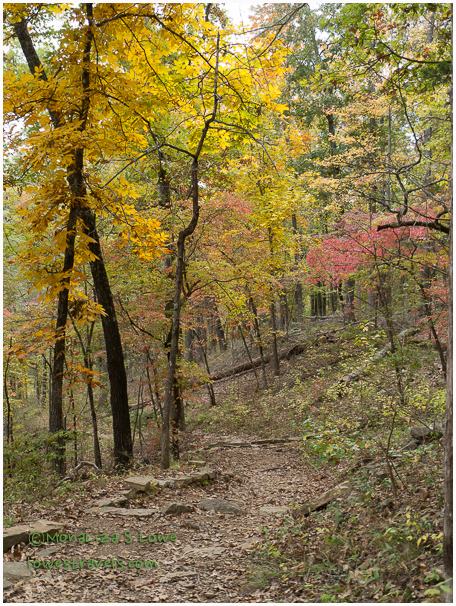 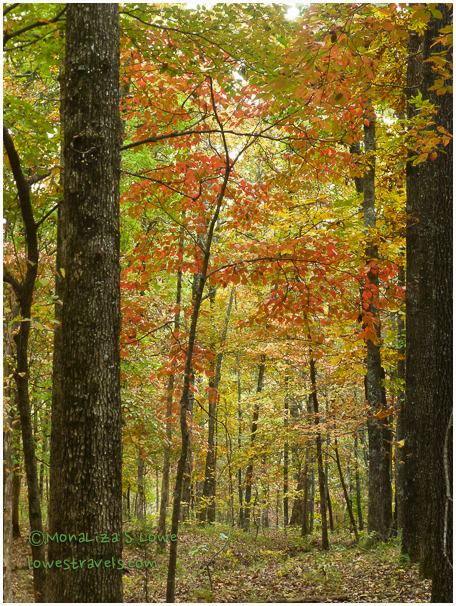 About a quarter mile from the trailhead we came across another bluff, a massive sandstone overhanging formation.  We learned that this was a result of the brittle shale eroding faster than the solid sandstone above it.

After another mile of hiking we reached the Yellow Rock high bluff, which earned its name from the yellow iron oxide stains on its face.  Standing atop Yellow Rock, we had an unobstructed view of the Lee Creek valley below us and a very colorful hillside.  Lots of yellow, orange, pink, purple and red hues were peeking out from the hillsides.  We rested here and soaked up the views as Turkey Vultures soared above the valley. 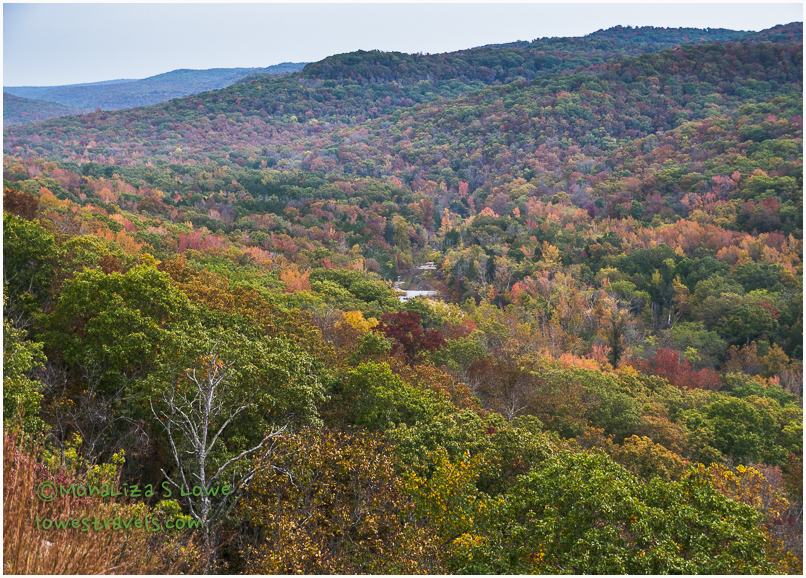 The state park is surrounded by the Ozark National Forest and is the result of one of the many works of the Civilian Conservation Corps (CCC).  It was built during the 1930’s-1940’s, as were other CCC-built state parks we’ve visited, and their hard work and craftsmanship were displayed and celebrated.  We saw a centerpiece of their legacy about a quarter mile from our campsite, the lake and a unique waterfall.  These projects and several other buildings were built to seamlessly complement the landscape, and they have been well preserved for everyone’s enjoyment. 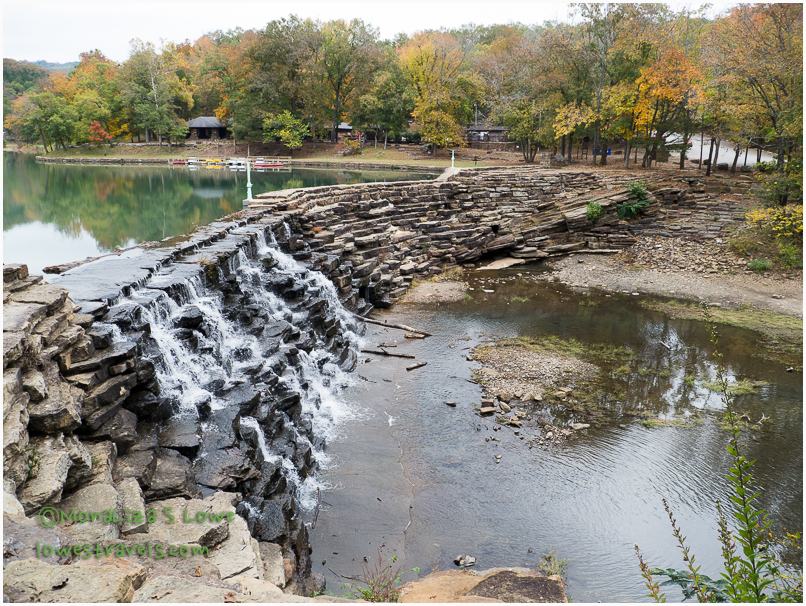 Lake and Dam created by the Civilian Conservation Corps (CCC)

Flaming yellow at one of the picnic areas

A statue commemorating the CCC

A caterpiller I saw on my walk

We were situated in campground “E”, which was just a few steps from the meandering waters of Lee Creek.  Summer may be over, but this park remains very popular as a place to view the fall foliage.  But an additional bonus was our spacious site and the surrounding woods that made it a perfect setting for solitude and quite walks in the woods. 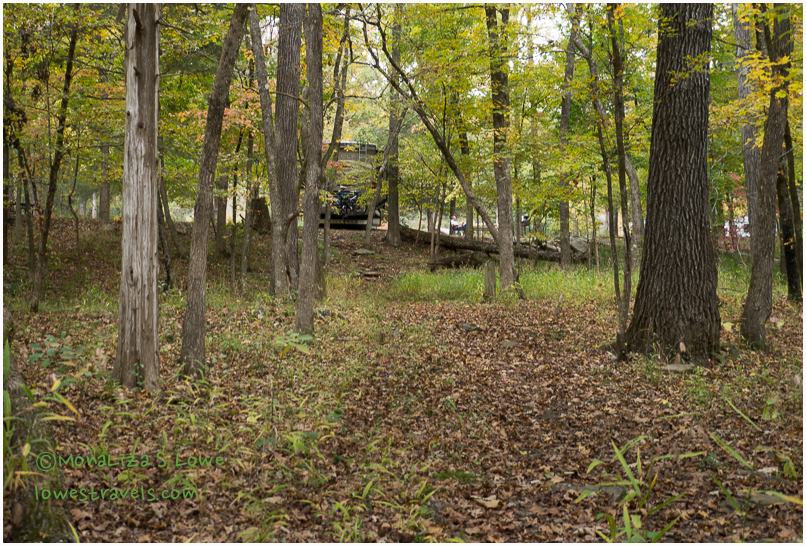 It could be my imagination, but it seemed like the leaves were changing colors daily during our one-week stay here.  In addition to hearing the rushing waters, singing birds and chirping crickets, the beauty of the colorful trees made my strolls along the creek and through the woods very peaceful and relaxing.

Bluffs along the creek

I lamented to Steve that we arrived here too early (week of Oct 17 ) and were missing the best time for the leaves to show off their brilliant intense colors.  But I was wrong, for near our campsite I found leaves from individual and small groups of trees so gorgeous that my camera couldn’t capture all the colors of their leaves.  I saw  scarlet, deep mahogany, purple, black, pink and gold in stunning intensity. 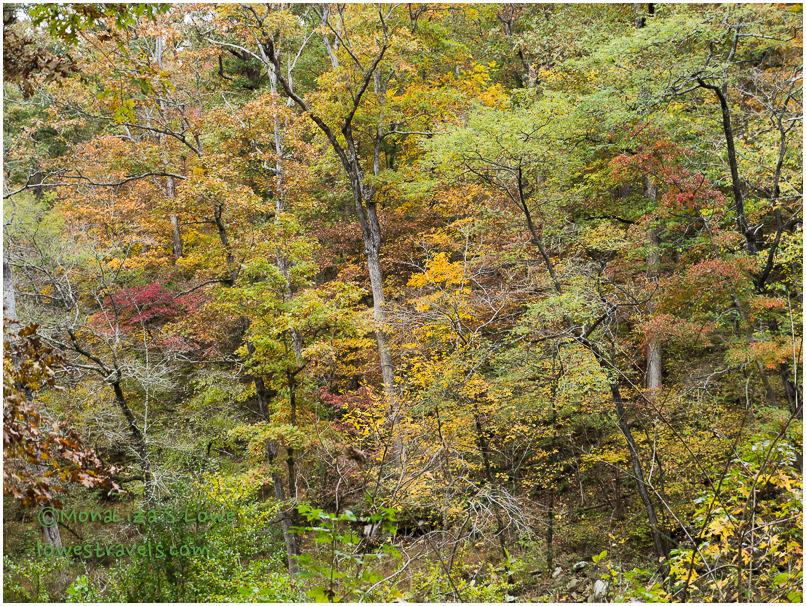 Even if all of the leaves hadn’t turned while we were here, the beautiful fall hues did not disappoint.  Fall foliage in the Ozarks is this area’s best kept secret.  We so enjoyed our stay at Devils Den State Park that if we come this way again we will definitely stay here – we can survive without connectivity to the outside world for a while!

I don’t need internet to sit outside and sort through my pictures!

Categories: Arkansas, Where we have been