A city on a twisty road – Eureka Springs, AR

Note:  By the time you read this we’re already in Oklahoma.  We had no internet service for several days while at Devil’s Den State Park near Fayetteville, so we had to settle for hiking and relaxing with no connectivity – but we’re not complaining! 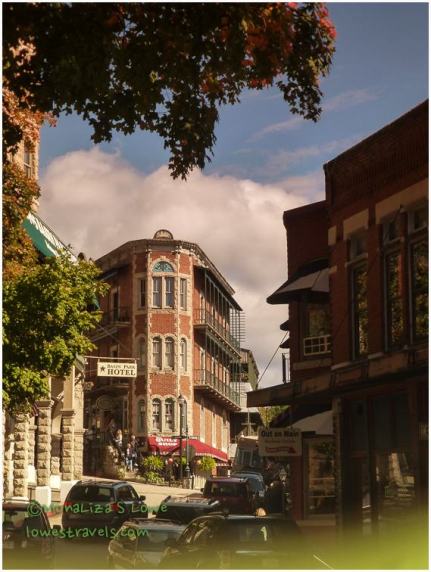 It was a good thing we ended up at Eureka Springs when we left Buffalo Point.   We discovered a real Victorian mountain village nestled in the Ozarks.  We usually take the fastest way to get the scoop about a new town – by taking a guided tour.  We heard that one was leaving an hour after we arrived at our campground, so we grabbed our cameras and hopped on a trolley. A long-time local native narrated the story of what made this town a destination, and why the entire downtown district is being placed on the National Register of Historic Places.

We learned that the city has a colorful and unique history, beginning with over a hundred cold-water springs that the Native Americans believed had healing powers.  Then there was the claim that the estimated 56 miles of stone walls throughout the city are the largest collection of Victorian architecture in the central United States.  Tourism is by far the #1 industry here, and the residents were all very patient as they waited behind the trolley until they were able to pass.

And just as we normally do, after the tour we ventured out on our own to walk around and experience for ourselves what makes this a unique and charming city.  I realize I’ve described other cities we visited that had this same small-town charm, but Eureka is truly unique as you will soon see.

So let’s start with the springs.

The springs at Eureka were said to be miraculous, and their “healing waters” brought thousands of visitors to the city.  To discover what made this place famous for its healing waters, we located several of the flowing springs and pocket parks throughout the city. Most of them are landscaped, and some offered a drinking fountain to quench our thirst and hopefully cure any of our current ailments.  Unfortunately, Steve’s vision didn’t improve at all after he took a long drink.  The latest count of springs remaining within city limits is 63.

Eureka Springs is a small city built on hills and valleys.  The 56 miles of stone walls were constructed between 1885 and 1910, and they are holding up well after over 100 years. The limestone used was sometimes quarried onsite.  The walls allowed the hills to hold up houses where floors went up or down the slopes as geography demanded.  Even more walls have been constructed during restoration and preservation efforts as tourism has increased.

The city was even featured on “Ripley’s Believe it or Not”, as they illustrated the oddities of the city and described its “230 winding, twisting streets and rock walls . . . miles and miles of them”. 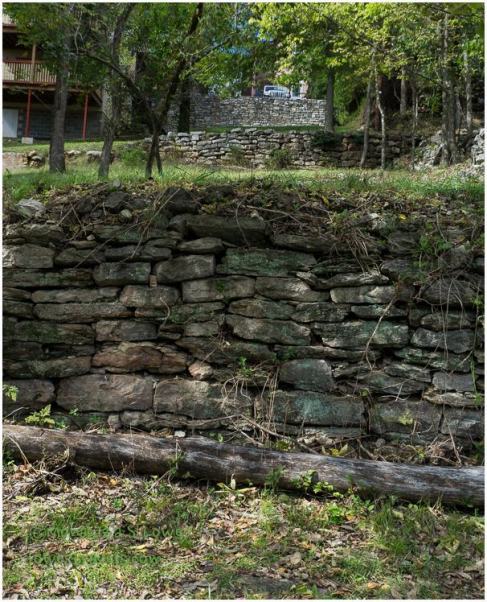 On another day we found that our stroll around the city was a good workout, as we clocked 7 miles going up and down the winding, hilly, twisty narrow streets.  All streets wind around town, and none of them intersect at a 90 degree angle.  This means there are no square blocks in the city, and to top it all there are no traffic lights!  The city was called “Stairstep Town” in 1954, due to its numerous stairways of wood and stone connecting the street levels.  We found several stairways to use as shortcuts to go from one street to another instead of walking up to the next bend.

The Little Switzerland of America

The other moniker that Eureka Springs has enjoyed is “The Little Switzerland of America.” While wandering around the streets we noted that they are filled with Victorian-style cottages and manors painstakingly restored and renovated to preserve their elegant past. Some are now converted to B&B’s, but many are still privately owned.  And some have more more than one mailing address due to the geography that dictates a main entrance on more than one street. 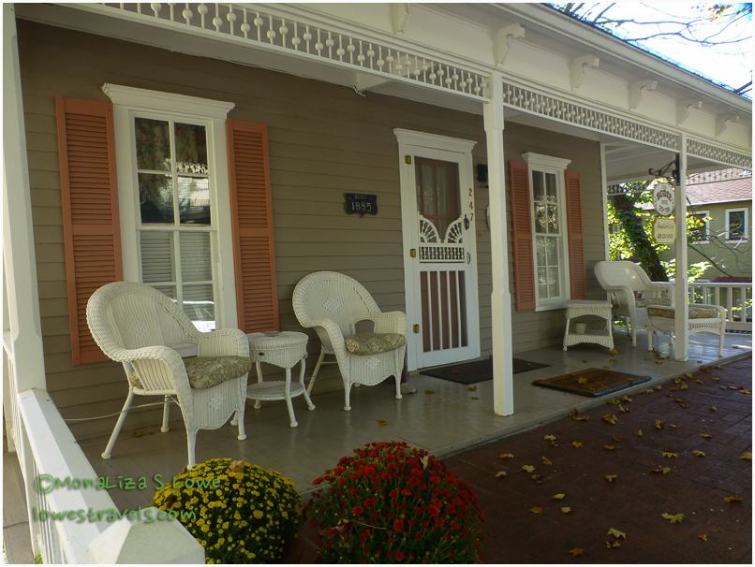 The restoration efforts were obvious, and we learned that most of the work is done by the individual owners, making their homes a labor of love.  Each turn in the road led us to colorful and distinctively lovely “cottages”, as they like to call them here. 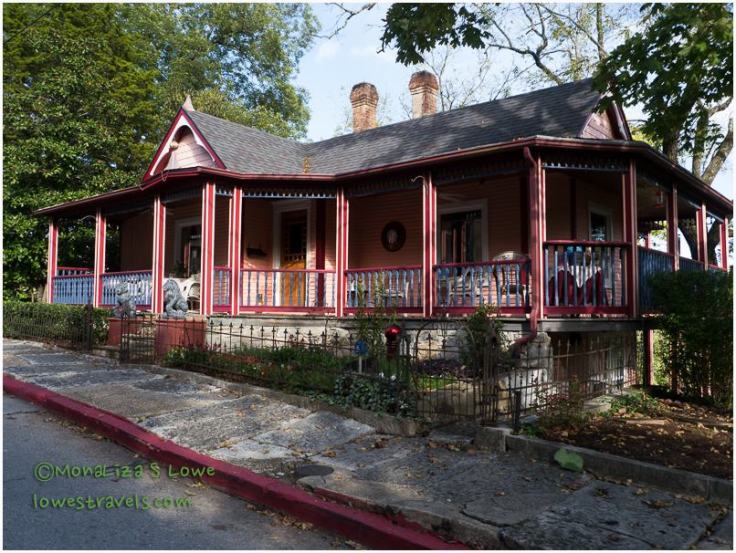 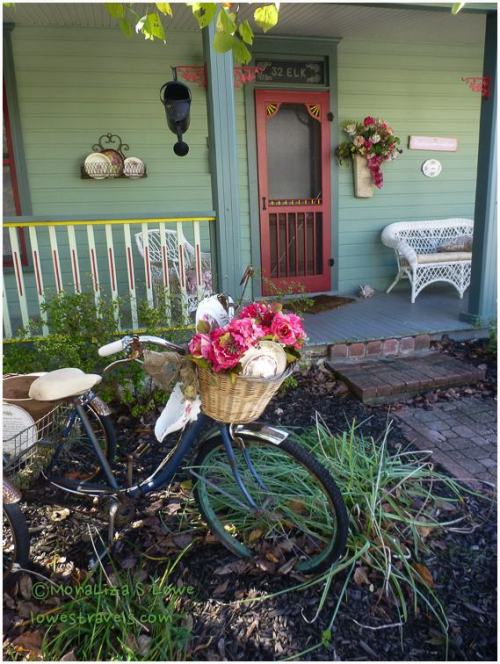 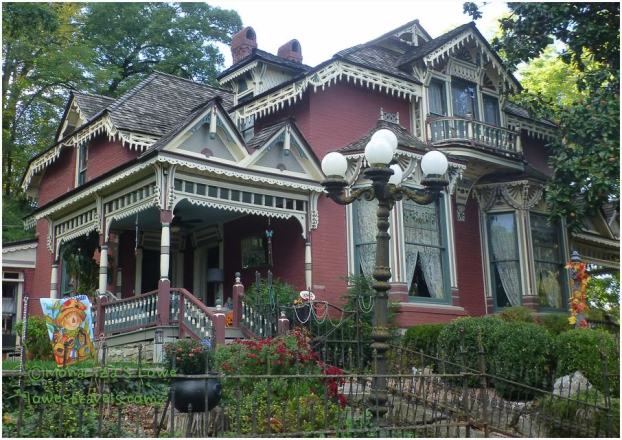 And as usual the historic downtown shopping district was lined with art galleries, shops, restaurants and more.  But you have to be careful walking along the uneven sidewalks or you might have an unpleasant “trip”. 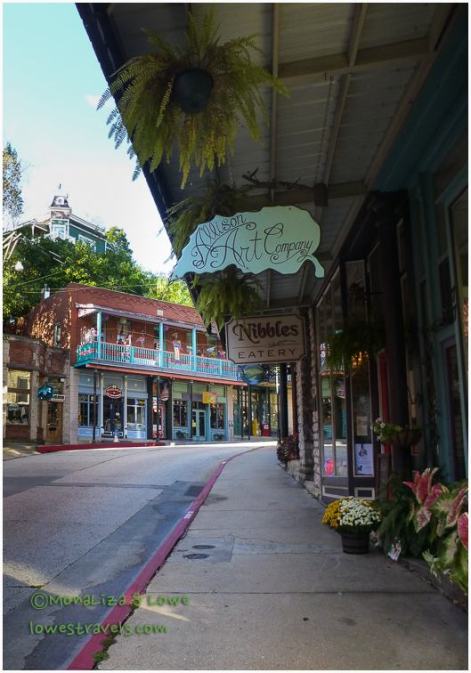 If you watched “Ghost Tours” on the Sci Fi Channel, you may have seen that the historic 1886 Crescent Hotel was featured there.  Although we didn’t see the show, the Crescent Hotel was apparently one of those places where they caught a full-bodied apparition on video.  For those who believe in that stuff, stay at this hotel and perhaps you’ll meet their famous ghost “Michael”.  He was a stonemason who fell to his death during the hotel’s construction.  The room he fell into is sometimes booked up several years in advance.

Wildlife on the streets!

Well, we didn’t expect to encounter critters as we wandered along the hilly streets.  As I walked down one of them, I felt something strange under my foot, and was horrified to discover I had stepped on a snake!  You can see the injury on him in the picture below.  I felt bad for him, and I hope the poor guy survived.  I almost had a heart attack but came out of it OK.

A molting squirrel was even playing with the deer, who patiently watched us go by. 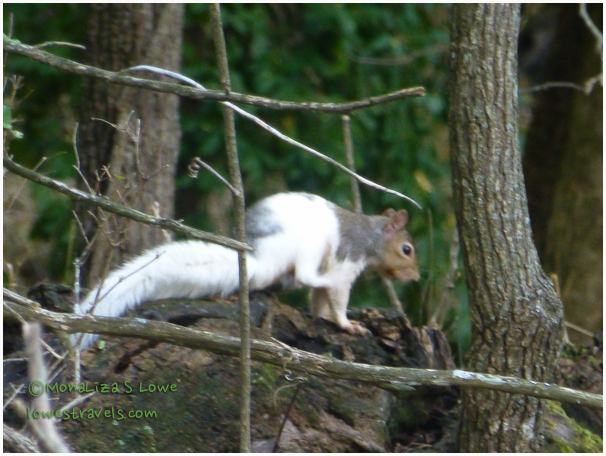 Other points of interest we explored

Outside of the city are some attractions worth driving to, and each had its own story to tell.

The wood and glass Thorncrown Chapel is 48 feet tall and has 425 windows covering 6000 square feet in glass.  It sits atop over 100 tons of native stone and colored flagstone.

Our next stop was at Christ of the Ozark, which is located next to where the “Great Passion Play,” is featured in an outdoor auditorium.  The nearby statue stands seven stories high and spans sixty five feet across, and it can be seen from miles away.  My current header shows the Christ of the Ozark statue as viewed from the balcony of the Crescent Hotel.

After all that sightseeing in the city it was time to hit some trails.  At Beaver Dam Lake we followed the steep terrain on a short 2-mile loop at Dogwood Trail.  Since it is fall, the flowering dogwood trees that abound throughout the area were dormant and I could just imagine the blooms in the spring.  On this trail we came across overlooks, beautiful geographic features and one of the largest bluff shelters found on Beaver Lake. 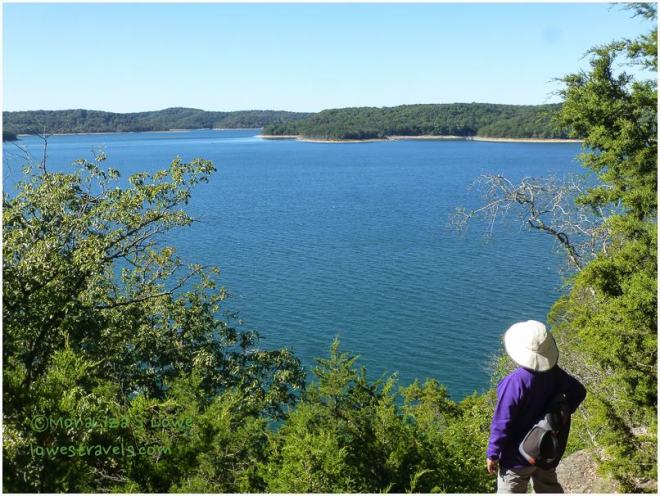 Next we followed the Beacham Trail at Lake Leatherwood, which is also a bike trail.  A few short hills led us to the Leatherwood dam – this was an easy-peasy hike on a nice warm day. 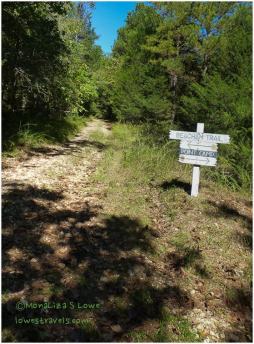 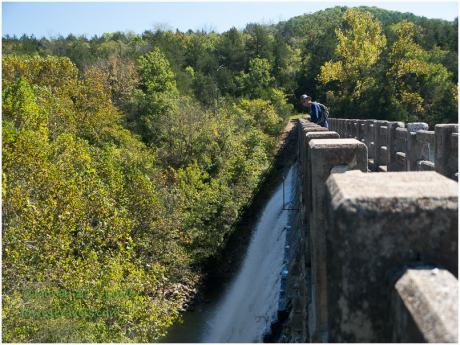 Finally, I climbed a 100 ft tall tower that was originally used by the Arkansas Forestry Service.  For only a dollar I got a million-dollar view of Eureka Springs and the surrounding area.  Had we stayed two weeks longer, the trees behind me would have transformed into the beautiful autumn foliage that Eureka Springs is also known for.  I was bummed we had to leave, but we will catch the beauty somewhere down the road 😦

We ended up becoming real fans of Eureka Springs during our stay.  It’s not just a pretty place – there are plenty of things to do here, especially during the fall months.  Be sure to add it to your itinerary if you’re in the area!