What a cool place! – Baraboo, Wisconsin

My good friend Lyndon Veloso was persuasive when he suggested we stay at Devil’s Lake State Park near his home in Baraboo, Wisconsin during our next stop.  Baraboo wasn’t originally a planned destination, but it was within our driving “range” and we decided to check it out.  We’re very glad we did!

Fun with a friend –

Being the gracious host that he is, Lyndon gave us a full-day “tour du jour” of his city and the surrounding area the day after we arrived.  We savored some of the good eats and drinks that Wisconsin is known for.

On that day, we viewed some cheesemaking and tasted cheese curds (yum!) at the Carr Cheese Factory.  We also sipped (and bought) some good wines at Wollersheim Winery, and tried a flight of brewskies at the Ale Asylum Brewing Company.  Finally, we drove through the fascinating Wisconsin Dells area.  We decided to pass on visiting the Circus World Museum, which is a local landmark and was home to the Ringling Brother’s circus for many years prior to 1918.

Deciding which to buy at Carr 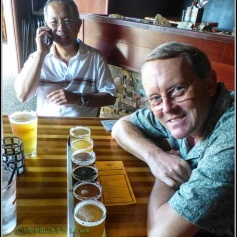 A generous flight of brews at Ale Asylum

Learning about the wines at Wollersheim Winery

We almost cancelled our stay at Devil’s Lake State Park after discovering potentially damaging low branches on the access road to our assigned site in their Northern Lights campground.  Fortunately, they were able to put us in their Quartzite campground section, which had better-trimmed trees and some level sites.  Would it kill these people to trim the trees now and then?  Lordy, what are we paying for!

Steve was glad I had suggested driving through the park in the car first to look around – it would have been very unpleasant if we had tried to take Betsy straight in.  We always unhook the car at a park’s entrance if we can, but we’ve learned it’s also a good idea to drive through with the car before committing the rig – especially if there are a lot of trees.

Anyway, we finally settled into our “electric only” site (Steve’s review here) with a full tank of fresh water.  We were happy to be here after Labor Day weekend – we had the whole campground practically to ourselves!

Oh my goodness, the hiking! –

The centerpiece of Devil’s Lake State Park is…drum roll…Devil’s Lake!  The lake and the Baraboo Hills are unique to the midwest.  Like many of the famous natural features of Wisconsin, Devil’s Lake and the surrounding area are the result of glacial activity.  The bowl shape we saw was cut into the bluffs by ancient rivers and sealed up by glaciers over 10,000 years ago.  Geologists theorize that the glaciers’ halt left two large terminal moraines along the north and south ends of the park, trapping the lake in between.  The result is a beautiful 360-acre spring-fed body of water.

Devils Lake is an endoheic lake, meaning it has no natural outlet.  Its elevation is about 130 feet higher than the Baraboo River.

The rocks – mostly Baraboo quartzite – are among the oldest exposed rocks in North America, at approximately 1.8 billion years old.  They consist of compacted sandstone, the hardest rock known.  The view from almost anywhere around the lake is breathtaking, especially when standing on top of the bluffs and looking down at the water and the tumbled rocks around it.

During our hikes, we noticed the tumbled rocks/boulders all over the east, west and south bluffs.  We initially thought they were old quarries, but then found out they are all natural. They had cracked, shattered and tumbled during eons of high winds, moisture and sub-zero temperatures.

Those boulder fields, called scree or talus, looked like they had been blown up with dynamite.  And although the process continues, we didn’t experience any rocks falling down – even though a few were sitting on precipices, looking like they could take a tumble any minute.  Our hike to the Balanced Rock formation was a steep and uneven stone staircase.  It ascended the quartzite talus slope from the picnic area at the south shore.

With the summer crowds gone, we enjoyed having the popular hiking trails around the lake to ourselves.  The park has over 29 miles of trails, and with easy access from our campsite we were high in energy for some outdoor fun just about every day.  With tumbled rocks all around the lake, some trails consisted of small paved paths through the talus slopes.  Many sections required heart-thumping climbs along the 500-foot quartzite cliffs.  Other areas were just a relaxing meander through the oak woodlands.

Baraboo quartzite rock is typically dark purple to maroon in color, due to the presence of iron (hematite) and other impurities.

The narrow white lines seen on the rocks below represent deposits of sand that formed as bars or ridges.  The sand eventually formed sandstone, which was then compacted to become quartzite.

Checking out a glen –

Also within the park’s boundaries is Wisconsin’s first designated natural area.  Called Parfrey’s Glen, it was designated in 1952.  But we wondered, what exactly is a glen? According to Wikipedia, a glen is a valley, typically one that is long, deep, and often glacially U-shaped, or one with a watercourse running through it.  Wow, are we glad we found this glen!

We learned from the park’s brochure that Parfrey’s Glen reaches a depth of nearly 100 feet, and it embraces a mountain-type stream flowing over its floor.  Its walls are sandstone, embedded with pebbles and boulders of quartzite.  This quartzite is conglomerate, sometimes called a “plum pudding” stone.  The sandstone layers conceal sandy beaches from ancient times.

It wasn’t just quartzite that captured my fascination on our many hikes, but also the late-summer blooming wildflowers.  I easily spotted some fiery red berries, as they gleamed amongst the green leaves.  And to my delight, many pink flowers thrived all along the trail! 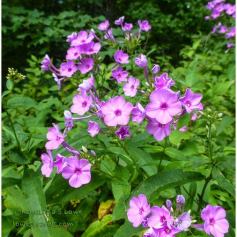 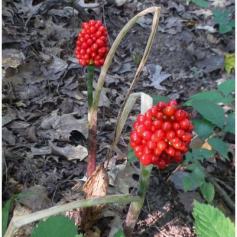 This little guy was one of the smaller tree squirrels playing hide-and-seek with me until I finally got a good shot – my first red squirrel capture! 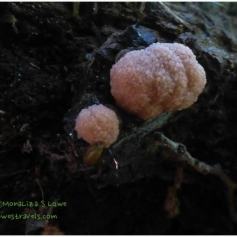 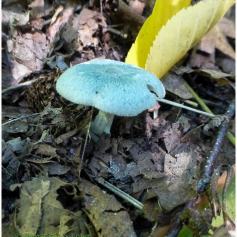 We’re so glad we stopped at Devil’s Lake State Park to experience the Baraboo Hills, designated as one of the “Last Great Places” by the Nature Conservancy for its rare rocks, plants and animals.  And many thanks to Lyndon for suggesting this stop and giving us the wonderful tour.  What a cool place it is!