Athens of the Prairie – Columbus, IN

Our first stop in Indiana was at Columbus, a small city 40 miles south of Indianapolis.  We had been to the Indy 500 in 2008, long before starting our adventure, so we were looking for another interesting city in the area.  By the way, if you haven’t been to the Indy 500, put it on your bucket list – even if you aren’t a racing fan it’s an experience you’ll never forget!

Columbus turned out to be an unassuming town with a population of 44,000, and a big reputation.  As always, the visitor center was our first stop, and we were aghast when we were charged $3 for a map of the city’s art and architecture tour.  I’m sure you fans of architecture would be more than happy to pay it, but we usually get all maps, brochures and tons of information from a visitor center for free.  Anyhow, we bought the map and then watched their 15-minute video about the city of Columbus.

From the video we learned that it’s the unique and varied architecture that put Columbus on the map, and it was due to the foresight of J. Irwin Miller of Cummins, Inc.  In case you don’t know, Cummins is the builder of millions of diesel engines used around the world in trucks, tractors, generators and…motorhomes!  In 1957, Mr. Cummins made an offer to the city that the Cummins Foundation would pay all architect’s fees for new public buildings in Columbus.  But there was a catch – they had to hire architects from Miller’s pre-approved list.

Thus this small midwestern city has buildings by Eero Saarinen, Eliel Saarinen, I.M. Pei, Kevin Roche, Richard Meier, Harry Weese, César Pelli, Gunnar Birkerts, and Skidmore, Owings & Merrill.  Many of the structures feature interiors designed by Alexander Girard.  I don’t know who any of these guys are, but they’re apparently well known in the world of architecture and with their work they made the city somewhat famous.

We are not serious fans of architecture, but the story of how this small city has strived to be its best is both interesting and inspiring.  We strolled around and viewed only a few of the more than 60 private and public buildings designed by the notable architects.

Public art and sculptures were located throughout the city.  For some, we had to pause to figure out what they were about. 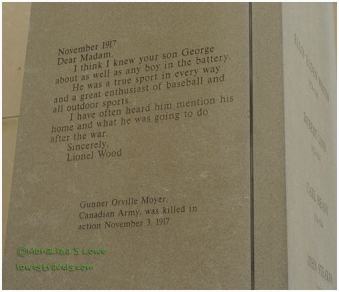 And that’s how Columbus got its nickname as the “Athens of the Prairie”.  It’s due to the city’s many large contemporary architectural structures and public sculptures.

When Steve learned that Cummins, Inc. is the #1 employer in the city, he immediately tried to find an engine plant tour.  You see, many motorhomes like Betsy have Cummins engines.  Unfortunately, he was disappointed to find out they don’t give tours, and he had to settle for a picture of him with a nice ISL engine just like Betsy’s.

Walking around town and gawking at all of these interesting buildings made us hungry and thirsty.  And what better way to cool off on a hot summer day?

Can you say COLD BEER?!

We left Columbus after only two nights and headed up north.  Our next stop was at Mississinewa State Park, with the intention of getting back to nature and having some quiet, peaceful evenings.  But when we arrived there we found once again that state parks are completely packed with noisy families during the summer, especially on weekends.  We like to see people having a good time, but I had trouble dealing with the nearby screaming (and drunk) mom who was having way too much fun.  Fortunately, all the families left after a couple of days and it seemed like we were in a totally different place.

To get away from the madness, we hiked, biked and stayed away from the campground as much as possible those first couple of days.  But alas, staying away from the crowd also led to my encounter with the chiggers 😦

I’m happy to report that the itching is gone, and hopefully the remaining scars will disappear in the next few weeks.

Here are some things we encountered while in the wild, and somewhere along the way is where I picked those damn chiggers…

Silkworm, hanging by a thread 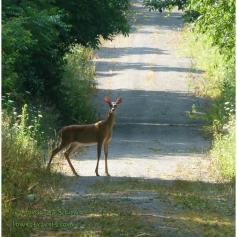 I was pleasantly surprised to see these gulls along the lake!  I last saw gulls in Alabama, and here they were as a reminder of our fun times along the coast.

In the evenings we strolled to the lake for fresh air (the park was very smoky as most campers had fires going).  We even took a nap on the picnic tables while waiting for the sunset.

I was finally rewarded with a gorgeous sunset to cap our stay at Mississinewa Lake.