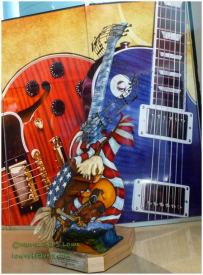 Our home base at Cave Country RV Campground (Steve’s review here) near Bowling Green, KY was only 90 miles from Nashville.  That’s closer than we got while we were in Tennessee, so we decided to cross the state line to spend a day there.  Of course, everyone connects Nashville with country music, but my mind was changed after spending a few hours there.  Nashville is about ALL kinds of music; country, pop, gospel, and rock.  Nashville’s monicker “Music City, USA” was coined by David Cobb when he was on the air in 1950, and has stuck until today. Surprisingly, music is not its number one industry – ranking third with health care and printing/publishing being #1 and #2, respectively.  Be that as it may, music is definitely what Nashville is most famous for.

With our time limited to just a day, we opted once again to start off with a guided tour – alway the best way to learn about a city quickly.  We like to take the first tour of the day to learn what areas we will want to explore further afterward, and also to get some good tips about the best local places to eat.  On this tour, one attraction was really “Greek” to us, but I’m getting ahead of myself.  Let me first take you to the music scene in Nashville, where our guide showed us areas that we later walked ourselves.

Music Row, along a portion of 16th and 17th streets, is widely considered the heart of Nashville’s entertainment industry.  In this section of the city, our guide pointed out numerous record labels, publishing houses, music licensing firms, recording studios and video production houses.  There are also many other businesses here that serve the music industry, as well as radio stations and networks.  Elvis Presley recorded more than 250 of his songs at RCA’s Historic Studio B. 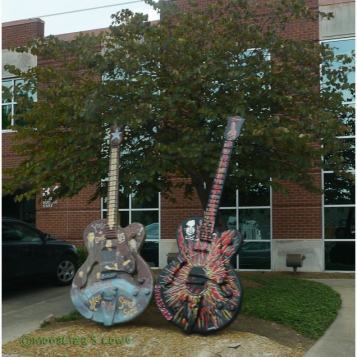 As we left music row via a roundabout, a controversial sculpture labeled “Musica” came into view.  It’s a very large statue of naked men and women dancing up out of the ground in a flower-lined circular drive.  It caused quite a stir when it was first unveiled.  Many locals felt it does not belong in Music Row, but tourists seem to love it – an hey, we’re tourists!

The honky-tonk section along lower Broadway (roughly a four-block stretch) is where we heard and saw live country music, which usually goes from 10am to 2am every day – and it’s all free!  This is the place for eating and partying, if you like Country music and want to see the various local and up-and-coming musicians perform. 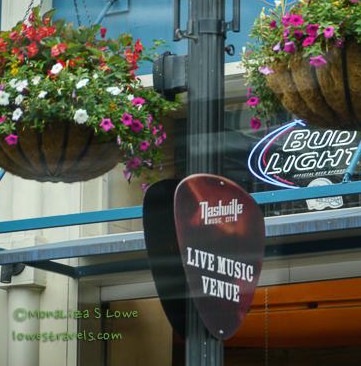 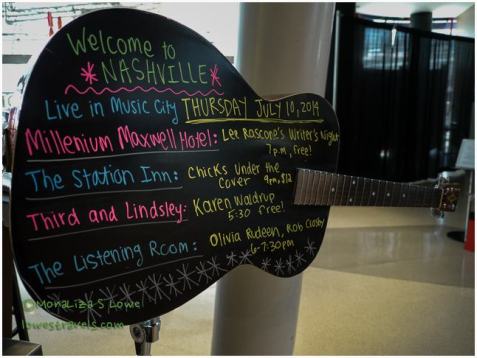 The heart of honky-tonk music

The Ryman Auditorium, also called the “Mother Church of Country Music,” is a 2,362-seat live performance venue, and original home of the Grand Ole Opry.  It was originally built as Union Gospel Tabernacle for evangelist Reverend Sam Jones in 1892.  After his death in 1904, it became known as the Ryman Auditorium, in honor of the man who built this Nashville landmark. 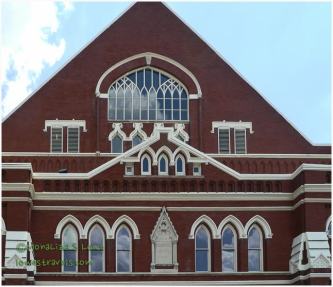 The Music Mile is a roughly one-mile stretch which connects downtown to many other area venues.  These include Music Row, Schermerhon Symphony Center, the Country Music Hall of Fame and Museum (which can be seen with its symbolic windows that mirror the configuration of piano keys), the Bridgestone Arena, the Tennessee Sports Hall of Fame and Museum, and the newly opened Music City Center.

The Music City Walk of Fame is a landmark and tribute to those men and women from all musical genres who write, perform, promote and produce music.  The stars lie in the walkway across the street from the Country Music Hall of Fame and Museum.

We had a chance to stroll along the John Seigenthaler Pedestrian Bridge, which crosses over the Cumberland River.  Here we had great views of Nashville and LP Field (known as “Last Place Field” by locals, as our guide told it).  The stadium is home to the NFL’s Tennessee Titans.

For you history buffs, the Bicentennial Capitol Mall State Park is a 19-acre free outdoor museum built in honor of Tennnessee’s 200th year of statehood.  I would have loved to walk this park and follow the trail to read the historical events in the state’s history, but it would have literally taken most of a day to do.

Finally, we arrived at the stop that was really Greek to us, The Parthenon!  We were pleasantly surprised to be transported to Athens for a few minutes, as we learned that the structure was originally built for Tennessee’s Centennial Exposition in1897.  It is the world’s only exact and full-size replica of the ancient Greek temple.  It houses the largest indoor statue, which we unfortunately did not have time to see.  It’s a 41′, 10″ tall gold-leafed statue of the Goddess Athena.  The Parthenon now serves as an Art Museum.

And that concluded our whirlwind tour of Nashville – much too short, but long enough to make us want to come back!