Hanging out in Lake Monroe, FL

We usually don’t make RV park reservations six months in advance, for doing so can mess up our flexibility (we call it “jello planning”) as we travel along.  But we were forewarned that snow birders from the northeast flock to Florida during the winter and parks fill up fast.  Now, six months later, we arrived at Lake Monroe, Florida for a month’s stay at Town And Country RV Resort.

We learned long ago not to be fooled by the “resort” designation, as it is often misused to make a park or campground sound like what it isn’t.  We chose this park for its proximity to Orlando Int’l Airport, from which we’ll be departing for our vacation.

This place is not exactly the stuff you write home about.  In fact, the campground has been sold to a developer and in its place will be homes which will be constructed next year.  No wonder the park is not crowded; on the contrary we’ve seen several of the “perms” packing and moving elsewhere.  We feel bad for them, as many of them live in structures that cannot be moved and will have to start over.  But to our advantage there are fewer campers, no crowds, less noise and spacious surroundings.  We’ve kept ourselves busy – I with my household chores and reading, while Steve does maintenance and minor repairs. 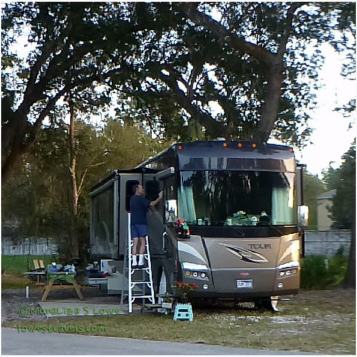 A new porch light being installed 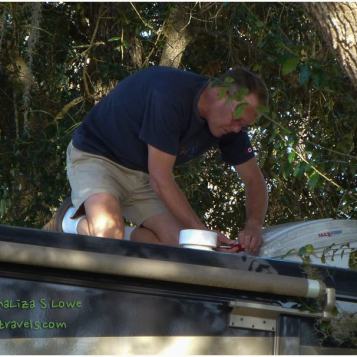 We have a great site, an end spot under a huge oak tree with a canal view 🙂 (site #9).  The local “feathered residents” are so welcoming as they check us out daily – early in the morning, around noon and again in the early evening – showing off their plumage. 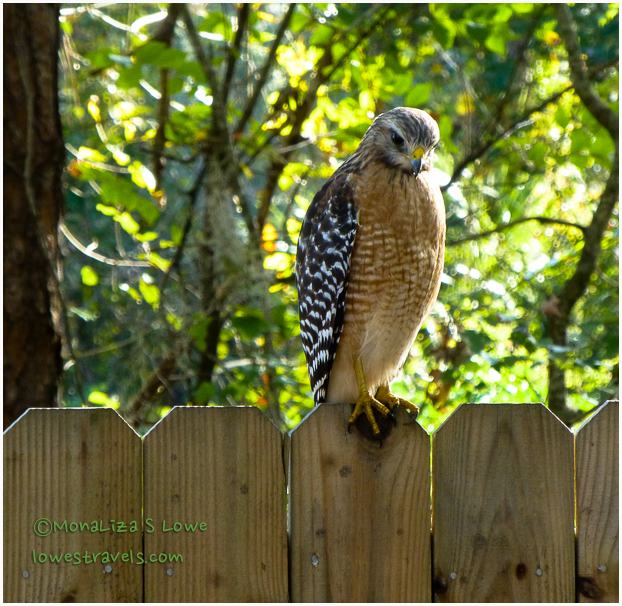 As you may know, Florida is teeming with birds and I don’t have to walk far from our site to observe these waterfowl quarry for food in the canal next to our site. 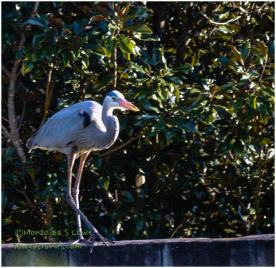 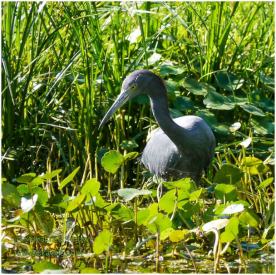 The weather here during the past week has been astounding – 80’s during the day and mid-60’s at night – as we leave our windows open while we sleep.  This, while most of the nation is suffering such a cold snap.  We almost feel guilty!  Our friend Marcy advised us that a “National Hate Florida Day” has been designated because of our fantastic weather break.

For our exercise, we drove to the nearby Lake Monroe Wildlife Conservation Area to tackle their yellow, red and blue blaze trails.  We went there twice and never encountered another human during our long walks (although we did chat with several cows).  Is that cool or what! 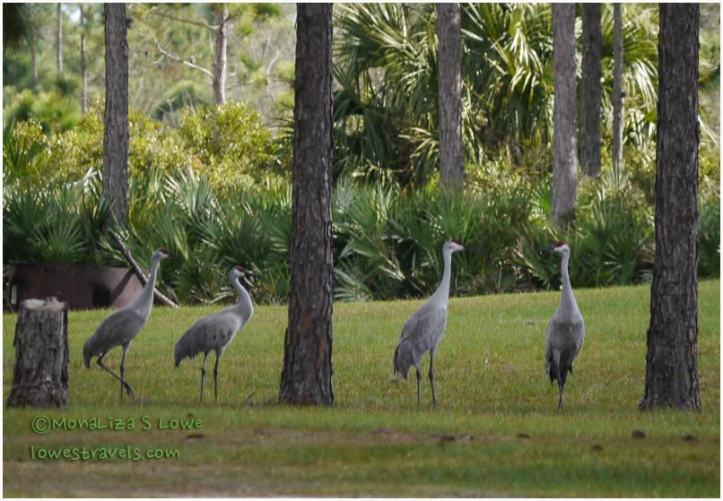 The city of Sanford was only 10 miles away, so on another day we loaded up the bikes after deciding to ride along their “Riverwalk” – thinking it would be a nice a long path.  Well, it was actually quite short, but we enjoyed riding its length several times while checking out the abundant waterfowl that seemed quite comfortable in this urban setting.

Armed with a tip from Steve’s barber, we took another trip to a more promising bike path at Big Tree Park, which follows the Cross Seminole Trail.  Before our ride, we walked down the park’s boardwalk to see “The Senator”, an approximately 3,500 year old Bald Cypress Tree that was lost to an arson fire in January of 2012.  Steve angrily commented that he hoped whoever did that would himself burn when the time came.

About Big Tree, “The Senator” 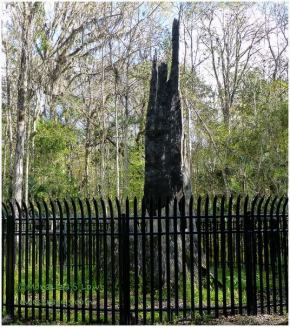 Remains of ” The Senator”

About 40′ feet away is the Senator’s sister tree – “Lady Liberty” – another Bald Cypress Tree estimated at approximately 2,000 years old. 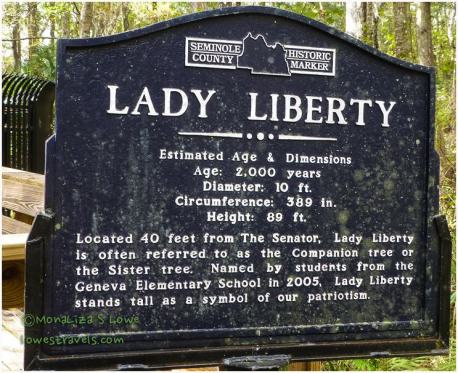 The Cross Seminole Trail was not one of our favorites, because a large section of it ran through residential areas and paralleled a heavy traffic road.  But part of it was nice as it passed through 3 miles of Big Tree Park and over U.S. Highway17/92 via a large overpass.  The signage was a bit confusing and we ended up stopping after 10 miles. 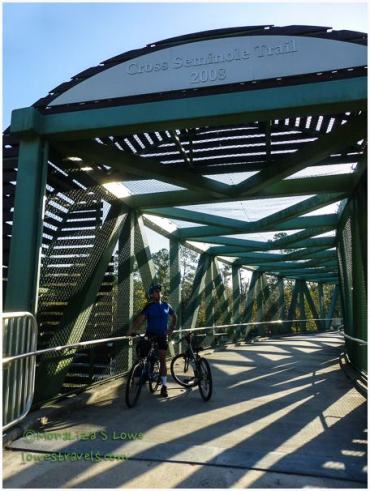 End of the trail

I know it seems like we are running around all the time, but yes we do take a break now and then to just sit around or read while waiting for our feathered friends to come and visit us.

I still have a post to write about our exciting visit to the Kennedy Space Center, but I’m running out of time.  By the time you read this Steve and I will be on our way to San Juan, Puerto Rico to hang out for a few days before hopping on a Royal Caribbean liner for a seven-day cruise in the southern Caribbean.  Steve calls this “a vacation from our vacation”, for he will not have to drive Betsy during this trip.  We’ll be back a few days before Christmas – happy holidays to all of you!

Lastly, just for laughs this holiday season, somebody does not know their spanish…