Frolicking in the Sand and Gazing at the Sun – Alamogordo, NM

Other than missiles, rockets, and Holloman Air Force Base, Alamogordo, NM is also known for its gigantic sea of sparkling white gypsum.  The ever-changing dunes of brilliant and white gypsum sand engulf 275 sq miles of the White Sands National Monument.

Gypsum dunes form here under a unique set of circumstances.  Rain and snow in the surrounding mountains dissolve the mineral gypsum from the rocks and carry it into the Tularosa Basin below.

Since there is no river to drain the basin, water containing the gypsum is trapped.  Then the water evaporates, leaving the gypsum behind in the form of selenite crystals.  The forces of nature – freezing and thawing, wetting and drying – eventually break the crystals down into sand-sized particles light enough to be moved by the wind.  Without wind there would be no dunes.  Since wind speeds of only 17 mph are needed to start the movement, we bet that the day after our visit when the wind storm with gusts of 40-50 mph must have moved a lot of dunes!

Hiking along the 1.5 mile Dune Life Nature Trail, we were fascinated by the various animal footprints left behind.  Most of the animals are nocturnal because of the harsh daytime temperatures.  They are rarely seen during the day but their tracks from the previous night tell a story.  Within the extremely harsh environment of the dune field, plants and animals adapt to desert conditions – such as the Soaptree Yucca in the picture below, where two thirds of its body is now under the sand due to dune movement.

When you are surrounded by this glistening sand, you can’t help but feel like a kid.  I tried to “sled” down the dunes, can you tell I’m having so much fun!

From the sands on earth to the sun up in the skies we took a scenic drive to 9200′ via the Sunspot Solar System Model to the National Solar Observatory located in the Sacramento Mountains.  Dry air, with very little pollution and plenty of sunshine make the peak an excellent site for observing the sun.  The pretty drive began at “Neptune” in the town of Cloudcroft and ending up at the Sun, where the visitor center is located. 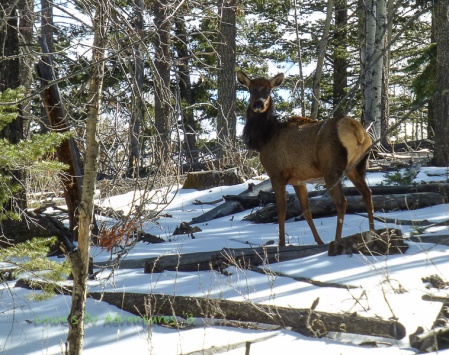 Look who posed for us!

Since we didn’t call ahead, we were surprised when we found the visitor center closed on a Monday.  Fortunately, a walking tour map was available so we ventured on our own.  There are many gigantic telescopes housed in domes around the grounds.  The Evans Solar Facility houses the coronagraph and coelostat, which are mainly used to look at the corona around the sun – the faint outermost layer.

An impressive instrument we checked out was the Dunn Solar Telescope.  The tower above ground is 136′ tall, but there is another 228′ of the structure underground.  The kind of things on the Sun that scientists here are investigating are granulation, sunspots, solar flares and varying magnetic fields. If you look closely at the center monitor on the right image, you will note that the telescope is displaying a sunspot in real time. Cool, we saw the sun ! 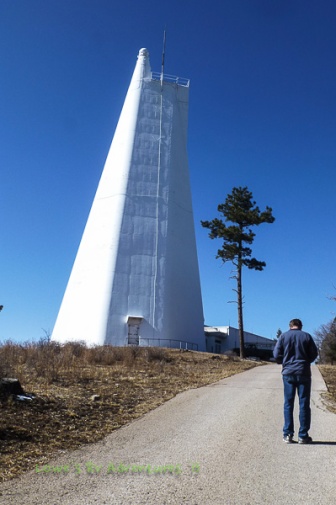 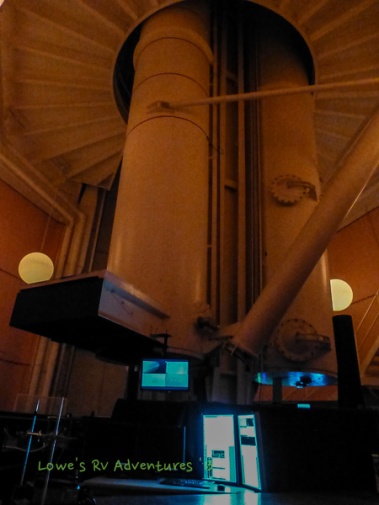 Just a few minutes from the Sunspot Solar Observatory was the privately-owned Apache Point Observatory.  There are four telescopes currently operated there, performing night-sky astronomical research.  If you are into research or are interested in the closest star to Earth, our Sun, a visit to the observatory is worthwhile.  If you are just curious travelers like us, then the scenic drive to Sacramento Peak makes it a good day!

From 9200′ we could admire a spectacular view of the Tularosa Basin with White Sands surrounded by the San Andres Mountains.