Batman and Robin caved in after a day of exploring lava caves   We then decided to explore the scenery outside the caves. There were attractions on the surface that awaited our enjoyment such as Native American rock art sites, historic battlefields and campsites, and a high desert wilderness.  Lava Beds Monument has a turbulent past.  It is not only because of its geologic turmoil caused  by Medicine Lake volcano’s spewing forth of lava, gases and cinders creating an inhospitable landscape, but also of the historical events that occurred in this area in the  late 1800s.  The monument encompasses the main battlefields of the Modoc war which was the only Indian war fought in California.

In 1864  Modoc Indians were asked to give up their homeland and to live on a reservation north of Klamath Falls.  During the  Modoc War of 1872-1873, the Modoc Indians used these tortuous lava flows to their advantage.  Under the leadership of Captain Jack, the Modocs took refuge in this  natural lava fortress now known as “Captain Jack’s Stronghold”.

They managed to hold off US Army forces numbering up to twenty times their strength for five months. Eventually, however, Captain Jack’s entire band was captured and he was hanged while the rest of his followers were sent to Oklahoma never again to return to their homeland.  We followed Capt Jacks Stronghold Trail which winds through the heart of the Modoc’s wartime defenses and we observed its rough terrain and the rock formations that served as their fortress.

On the US Army side, General Canby who led the peace talks between the Modocs became the only General killed in an Indian War.  A wooden cross was erected by a US soldier in 1882 . Inscribe on the cross was, “Gen Canby USA was murdered here by the  Modocs April 11, 1873.”

The Monument also includes Petroglyph Point, one of the largest panels of Native American rock art in the United States.  Petroglyph Point was an island throughout much of its history due to the fact that Tulelake was about 10 times larger than it is currently.  However, during the early 1900’s the lake was drained to make way for homesteaders.  As a result you must drive out to it now.  Along the cliff face are over 5000 carved symbols, and we could imagine the carvers standing up in their canoes as they worked. We also  noted some stripes in the cliff face which revealed the ancient compacted volcanic layers.  The shelf-like ridge represents a place where waves have eroded a portion of the wall creating a wave cut.  Each wave cut represents a different lake level.

What do these petroglyphs mean? It appears impossible to answer, but most researchers believe that the petroglyphs are truly rock art and do not represent a written language.  They remain a part of the ongoing culture of the Modoc people.

Along the Pacific Flyway the Monument rewarded us with migrating birds at a wildlife overlook.  Steve managed to scare them all away before I got my camera ready!

As we were exploring we observed the different volcanic features of the environment.  The rounded mounds of many cinder cones dotted the Lava Beds Landscape.  One example of it is the Schonchin Butte where we hiked to the top gaining an elevation of 500 feet.  At the top we had a 360 degree panoramic view of the Lava Beds from the fire lookout.

This place is one rugged beauty that we enjoyed so much that we stayed for 5 nights.  The solitude and  wilderness can really grow on you. 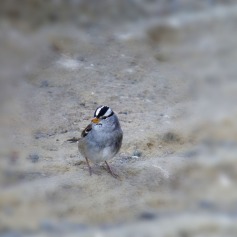 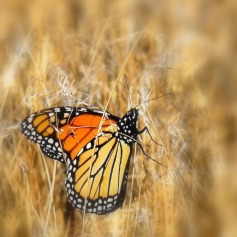 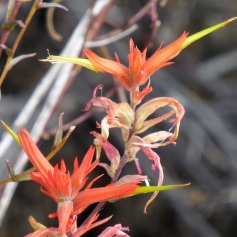