Our trip into the Wrangell-St. Elias National Park was a real eye-opener.  We thought Yellowstone was big – this park is 6 times larger!  It’s America’s largest National Park at 13.2 million acres, and it holds 9 of the 16 highest mountain peaks in the U.S.  Vast is the correct term for this park, and yet it is one of the least-visited in the country.

There are no designated campgrounds here, and most “accommodations” are simple wilderness camping with no permits required.  However, folks are required to use the provided National Park approved bear-resistant food containers.

Due to its massive size there is no realistic way to experience all or even most of this park within a reasonable amount of time.  There are only 2 primitive gravel roads into the park, and it takes several hours on either one of them before you come to a place where you can even begin to explore.

The only way to enjoy a short trip here is to fly in for your adventure.  Did someone say fly?  We’re up for that!  We took a 30-minute flight into the heart of the Wrangell-St. Elias mountains, to the remote town of McCarthy.

During the flight we were awed with the park’s vastness, and astonishing views of the highest peaks, massive glaciers and pure wilderness.

We flew over Root Glacier, Stairway Icefall and Kennicott Glacier, and along the wide rocky moraine.  Even from the plane we saw only a tiny section of this park.  Incredible!

Flying into the park allowed us to spend most of the day exploring the remote towns of McCarthy and Kennecott.  Kennecott originated with the establishment of the Kennecott Mines Company in the early 1900’s.  During those years, nearby McCarthy grew as a town that provided illicit products and services such as alcohol and prostitution, which were forbidden in the mining town.

Today, McCarthy’s population consists of only 51 brave permanent residents.  Kennecott and McCarthy have no central water, sewer or electrical systems.  Generators provide power, and water is pumped from wells or hauled by hand.  The remoteness, historical buildings and magnificent scenery are what continue to draw most visitors to this place.

There was a very interesting copper processing mill in Kennicott which is the most popular attraction here.  Built in 1907, the mill is a complex of wooden barn-red buildings.  Today, many of them are unstable and in the process of being re-vamped by the Park Service, but several are open for the public to check out.

The film at the Visitor’s Center was a great place to start, as we learned how the very high-content copper ore was discovered, followed by the massive effort it took to construct a mill in the wilderness.  A 200-mile railroad to the nearest port in Cordova was also built at the time.

The area’s copper-rich history is celebrated as a National Historic Landmark and is part of the the National Park Service system.

We followed a trail out to Root Glacier, which along with Kennicott Glacier has dumped massive dirt and gravel flows through the nearby valley.  It was incredible to stand near the flows and listen to the cracking ice and dirt in front of us as far as the eye could see.   This mass of material is continually melting and moving very slowly down the valley.

We think flying in and out of the park was a good decision, since it gave us fantastic views of 16,000-foot peaks, massive glaciers and icefalls.  We talked to a man and his daughter who had backpacked in the park for a week, and they told us they were only able to see a tiny fraction of it.  Did I mention this place is VAST?

Our base camp for this stop was at Kenney Lake RV and Mercantile park.

Copper River, this is where the richest and tastiest Salmon in the world are caught, Copper River Salmon! Available mid-May and June

A structure on a ledge at Erie Mine – not a bad view!

The remote town of McCarthy, and I mean REMOTE

Can you spot the Kennecott Copper Mill? 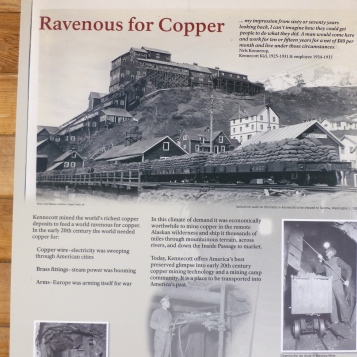 About the Kennecott Mine

The Old Hardware Store is now used as a study center 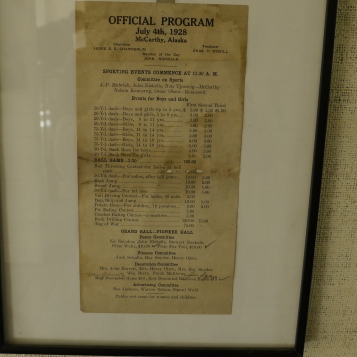 The only eating place at McCarthy, we were definitely a captive audience. Bring plenty of money!

A piece of an ore-crushing machine 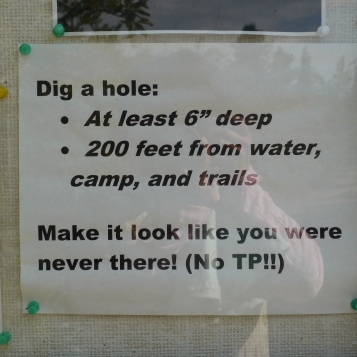 The correct procedure for burying your poop in the park. Don’t mess it up or the poop-police might get you!

This was a wonderful stop that we’re glad we made.  The cost of the flight was well worth it, as we were able to see so much beauty from the air.  And the relaxing day in these remote towns really got us to thinking about what a life out here might be like.  We highly recommend this trip!