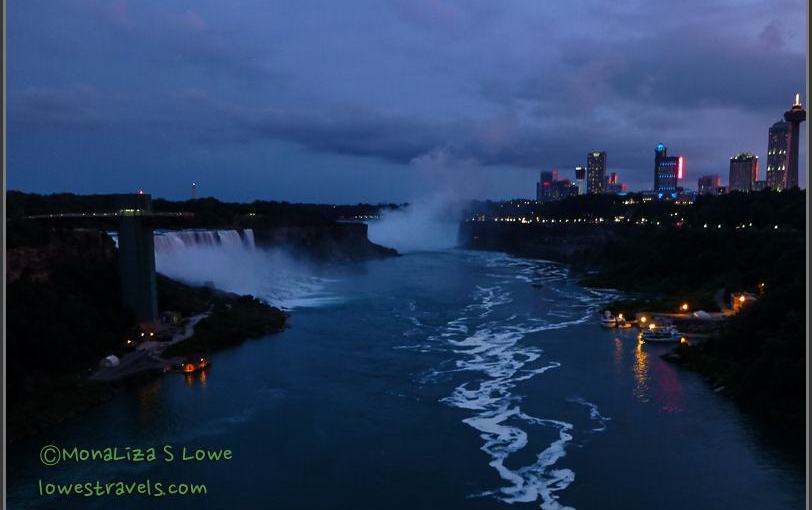 We could never get tired of gawking at the three massive waterfalls collectively known as Niagara Falls, as we experienced them several times – on foot, bicycle and via a guided  tour.  How could we?  The three falls – American Falls, Bridal Veil Falls and Horsehoe Falls – are spectacular, breathtaking and awe inspiring.  They are a required destination that we attempted to view from different angles and viewpoints.  So, for those of you who have been there, bear with me.  I can barely contain my excitement!

After chilling out at Lake Erie for a couple of days, we had our priorities set – walk and bike around the waterfalls.  On the first day, our plan was to just stroll around Goat Island, but we got so excited with the waterfalls and surrounding beauty that we decided to turn it into a major walk.  Our adventure started by walking around Goat Island and crossing the pedestrian bridge to Prospect Point, where we had an awesome view of the American Falls.  Then we walked up to the observation tower and continued on to the Niagara Gorge Trailhead where we followed various trails, ending at the Whirlpool Gorge overlook.

Goat Island was so called because just a single goat survived out of many other animals during a severe winter in the 18th century.  It is a small island in the Niagara River, located in the middle of Niagara Falls between the Bridal Veil Falls and the Horseshoe Falls.  At this point we walked to Three Sisters Island, where along the river we saw a unique view of the upper rapids as it raced down to the Horseshoe Falls.  We should point out that many major improvements have been completed during the spring of 2013 at several viewing points along the falls on the American side.  They have done a fantastic job.

We continued our walk across one of the two bridges connecting Goat Island, and here is where we got a prime view of the American Falls, the rapids and Bridal Veil Falls from Prospect Point near the observation tower.

Continuing on our trek, we ambled on to the Niagra Gorge trailhead where a series of trails parallels the Niagara River Gorge.  We passed under the Rainbow Bridge, where pedestrians can walk across and get spectacular views of the falls on the Canadian side.

On our way to the Whirlpool Gorge we took the more rugged and scenic trails, the Great Gorge Railway Trail and Whirlpool Rapids Trail.  Returning, we took the easier Niagara Gorge Rim Trail and the Robert Moses Recreation Trail.  At the Whirlpool Overlook we learned how Niagara first formed many thousand of years ago, when the falls carved through the rocks and receded, forming the 7.1 mile gorge that we saw today.

Niagara River with Rainbow Bridge in the background

The whirlpool rapids run at 22 mph, 35 feet deep and at a Class VI rating are considered among the most dangerous in the world.  Fortunately we had no desire to challenge them! 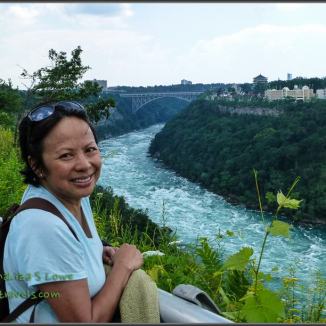 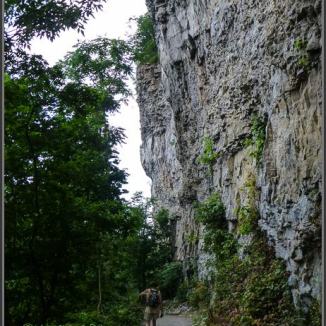 The Whirlpool Gorge is so named because of the water which circulates through this section counter-clockwise and must dive under the incoming stream to continue down the river.  In 1913, the aero car you see in the picture below was built by a Spanish engineer and is suspended on 6 interlocking steel cables.  It travels between two cliffs on the Canadian side of the gorge.

Not content with our 11-mile walk in 90 degree temperatures on that day, we woke up early the following morning to bike back to the falls.  The trailhead was at the foot of the North Grand Island bridge.

As we biked along the Niagara River Trail we saw two water intake gates for the power plants, the mist of the falls on the horizon and finally Luna Island, where 10% of the river flows into the American and Bridal Veil Falls. 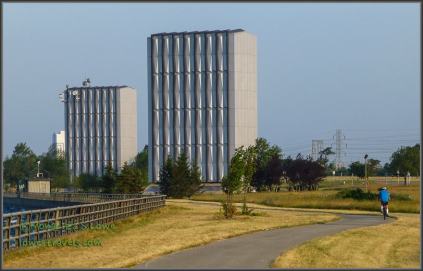 Power plant intakes on the US side 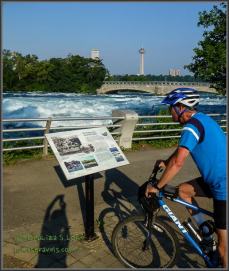 And then we did what most toursist would do – got wet under the falls, heard the thunderous waters cascading down, felt its intensity  and got inspired by the spectacular views at the foot of the waterfalls! 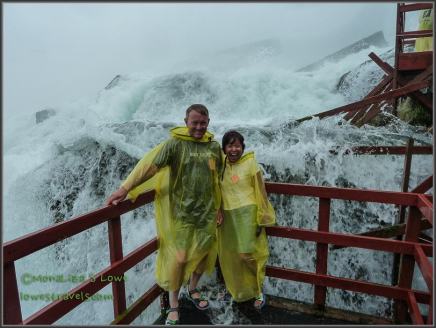 At the Hurricane Deck – Cave of the Winds 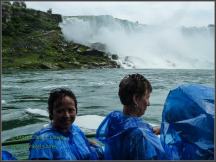 Maid of the Mist-American Falls in the background 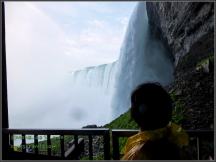 Horseshoe Falls from below-Journey behind the Falls

Strolling into Ontario, Canada across the Rainbow Bridge offered another stunning view of the falls, especially during the evening.  This is the best way to get between the US and Canadian sides of the falls if you can, we walked across just to take some pictures and get dinner.