After another day at sea we were thrilled to get a first glimpse of the beautiful green mountainous islands of Indonesia.  It’s exciting to enter a country that you’ve only seen in magazines or brochures previously, and so it was as our ship set anchor in the shallow bay facing Komodo Island.  Not much civilization except for a long pier leading to a few primitive structures on the beach, but it looked just fine to us!

The Coronavirus scare has gotten to the point that we were ordered by local authorities to have our body temperatures checked and wear masks during the 4-hour stop.  I suppose this was intended to protect the residents and dragons we were going to visit, but the masks weren’t very comfortable considering the heat and humidity that day.

There were only two excursions offered, with most folks choosing to visit Komodo National Park to see the Komodo Dragon Lizards.

After being tendered to the island, we ended up getting in a good 2.5 mile hike and seeing several Komodo Dragons that were much larger than the ones we’d seen before in the Philippines.

We learned that several people have been killed and eaten by these nasty critters, mostly females protecting their young (like bears in the states), and we were instructed to stay with the group and not stray from the trail.  We were happy to oblige! 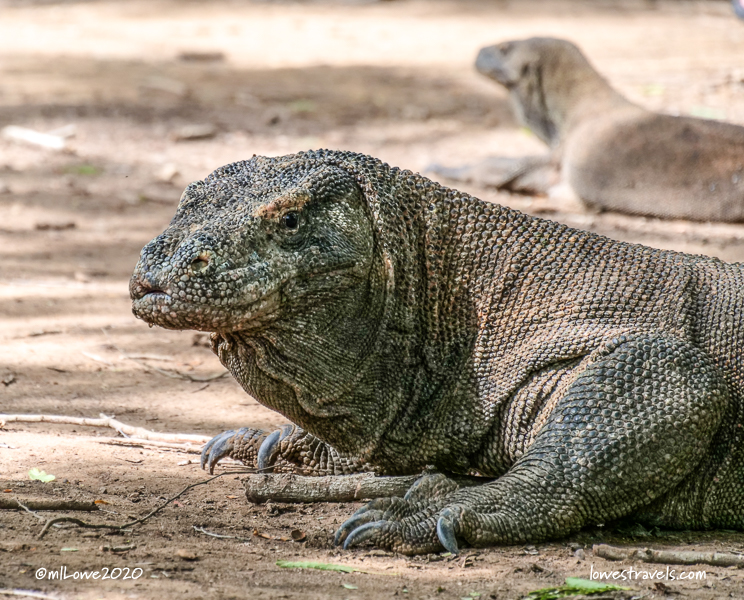 This was a short stop of only a few hours, but we enjoyed the tour and exposure to the friendly people (and unfriendly lizards) of the island.

Fortunately, we had plenty of time in the evening to dine with our world traveler friends Andy and Judi:

The evening sky gave us a spectacular show as we sailed back to the Java Sea: