After leaving Rotorua, our next scheduled stop was at Napier the following afternoon.  The winds were strong on the way there, so strong that we had trouble doing our laps around the deck without getting blown over:

As we approached Napier’s port the wind got even stronger, and I noticed that the ship had come to a stop a few miles out.  Oh oh!

The chair that almost got away

Soon the captain came on the intercom and announced that the winds were far too high for an attempted approach to the port, and we would sit for a while to see if the weather settled down.  Less than an hour later he gave us the sad news that the winds had gotten even worse at the dock and our stop at Napier would have to be canceled.  BUMMER!  The small town looked nice from where we were sitting, and we had been told that it had one of the best wine regions in New Zealand 😦

Well, nothing anyone could do about it so the ship turned around and headed back out to sea for our next stop at Wellington the following morning.  The winds eventually decreased, and folks drowned their sorrows at the bars that night: 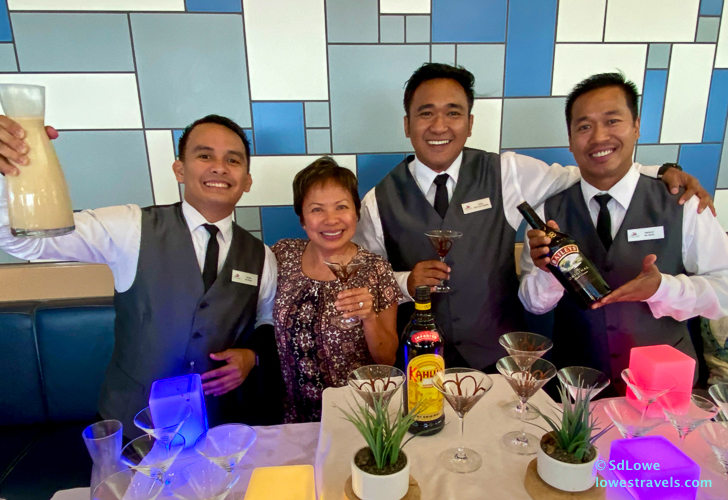 Well, no sorrow here!  Mona Liza with the boys at the bar – Ardel, Arsa and Nelson

The next morning at Wellington the island was under a mist as we docked, but we were excited to get off the ship and begin our explorations: 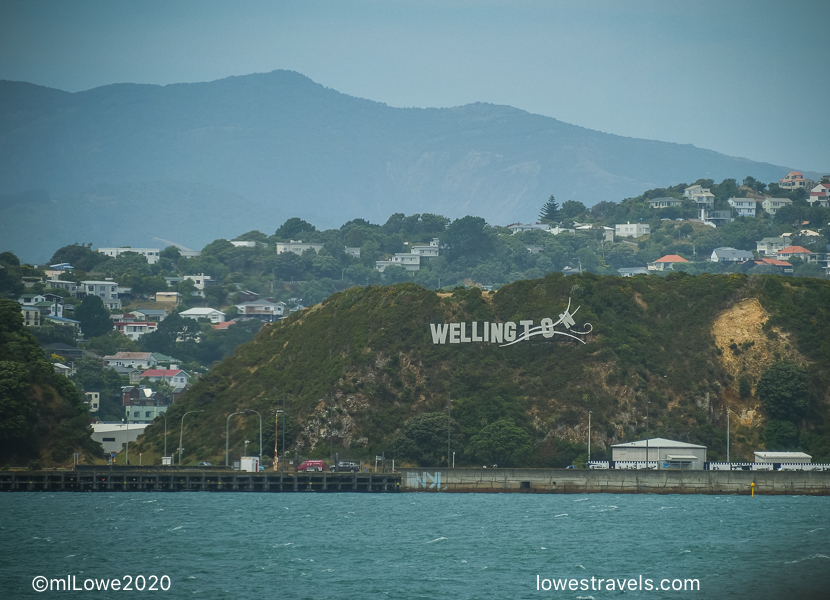 After a good workout in the gym followed by many walking laps around the ship, we departed on our included “Wellington Highlights” excursion.  It was well done, with an excellent driver/guide.  I enjoyed watching him negotiate the huge bus skillfully down narrow streets, and he gave us a great history lesson about Wellington while driving through several different areas surrounding the port.

We learned that Wellington is the windiest city in New Zealand, with the prevailing northwest winds producing 173 days of wind over 32 knots annually. 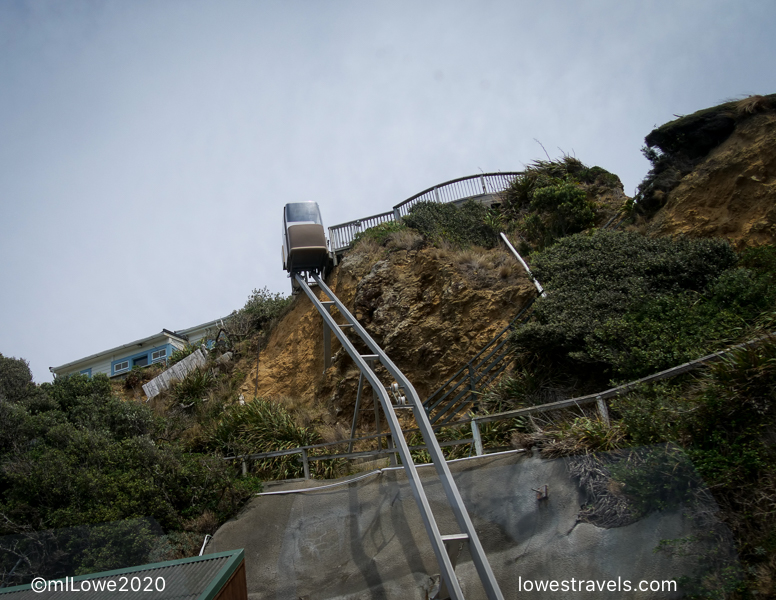 Several high-end hilltop homes have no access from the road, so they had personal trams installed to get between their garage and the house. Seriously!

Left-hand driving is “the other side”, according to Americans, while Europeans call it “the wrong side”

Instructions for tourists on how to cross the street

Our next quick stop was at a hilltop cable car station where we watched the car descend into the city.  There was a cool little museum there that we enjoyed too: 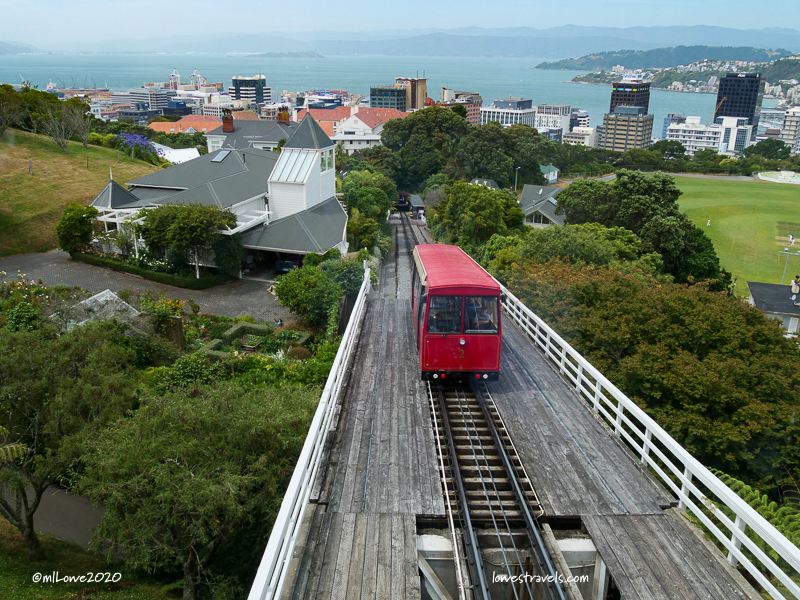 We’d never seen one of these before – description below… 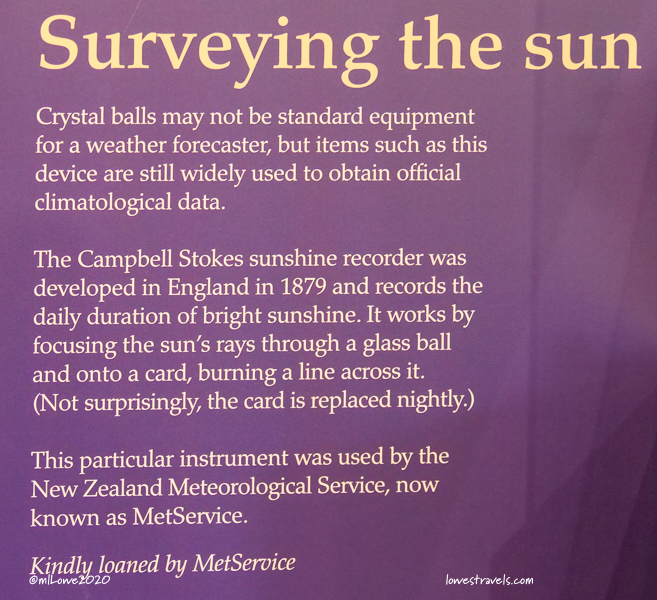 Finally, Mona Liza was very happy with the highlight and last stop of our excursion, a 30-minute self-guided tour at the Botanic Garden: 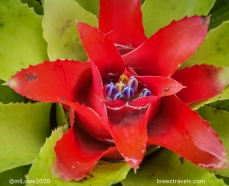 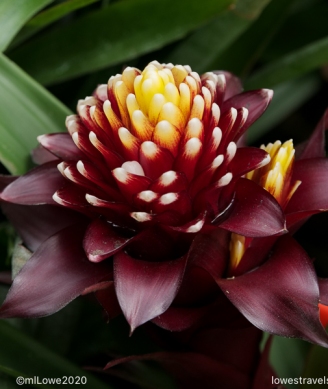 Our thoughts on Wellington?  Well, it’s the capital of New Zealand and a very busy city.  But we liked the atmosphere here, a place with vibrant, fun people.  The most obvious issues were lots of cars with parking at a premium, and very expensive housing with homes and apartments stacked practically on top of each other on the mountainous island.  Fun to visit, but we wouldn’t want to live here!

It’s been called “The coolest little capital in the world”, and we can’t argue with that.  The locals were friendly and the atmosphere wasn’t as frantic as at other recent stops.  We liked it!

Back on the ship, after dinner, we watched the National Geographic documentary “Free Solo”.  It’s a heart-stopping account showing Alex Honnold completing the first-ever free solo climb of El Capitan in Yosemite National Park.  Amazing, see it if you can! 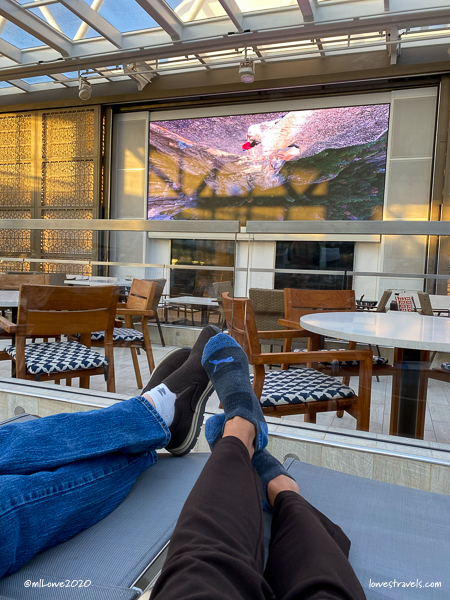 Just another night at the movies