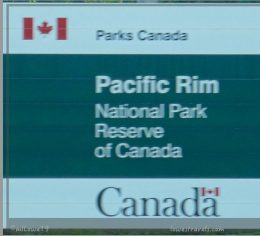 After gallivanting around Ucluelet we focused our activities on Pacific Rim National Park Reserve, the only national park on Vancouver Island.  A parade of rental RV’s driving around its 120,000+ acres every day proved how popular it is.  The  park resides within the traditional territory of the Nuu-chah-nulth First Nations.

The park’s management has been working collaboratively with First Nations, who have inhabited the coast for thousands of years.  They partnered to continue the age-old practice of welcoming and sharing Nuu-chah-nulth history, traditions, and culture with folks visiting the island.

With the many pictures we took, it was a challenge picking the ones for this post, so be prepared – there are a bunch of them 🙂

Long Beach showcases the rich marine environment on the west coast of Vancouver Island, and a portion of Canada’s coastal lowland forests.  It’s only a small section of the coastal temperate rainforest that spans from California all the way to Alaska.

A morning at Long Beach

This area is known for its awe-inspiring coastal landscapes that stretch between the villages of Tofino and Ucluelet.  We followed all of the hiking trails at Long Beach, combining them to create a decent trek.  We thought it would be an easy walk, but several elevated boardwalks had lots of stairs that warmed up our muscles as we negotiated twists and turns through lush green rainforest, shore pine bogs and massive old-growth trees.  Some side trails had long flights of stairs leading steeply down through the forest, ending on pristine beaches.  Loved it!

Just like on the mainland, we found pairs of iconic red chairs in the national park 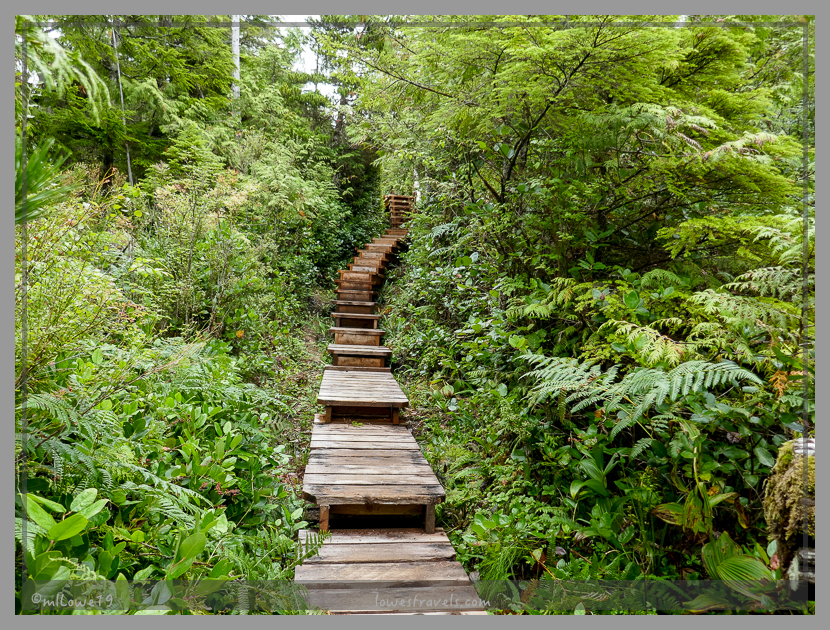 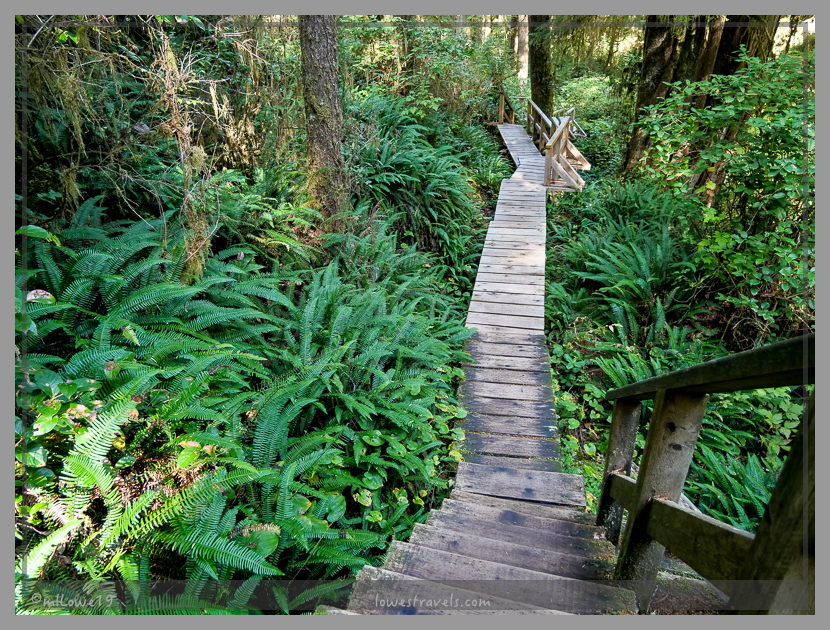 Walking under an ancient downed tree at Rainforest Trail B 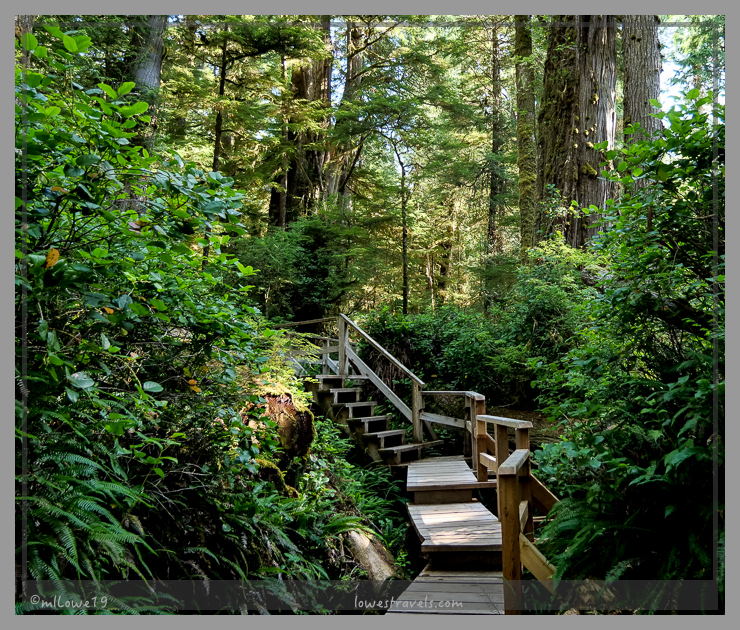 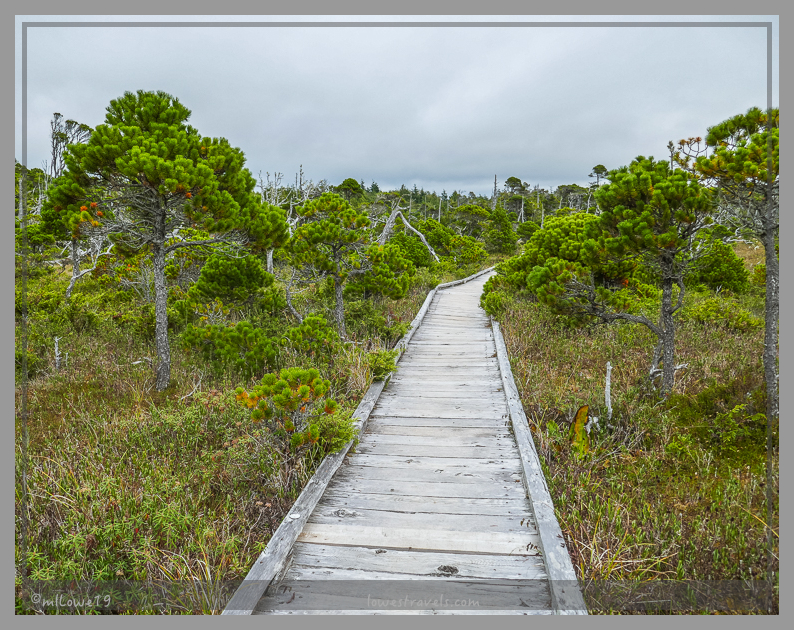 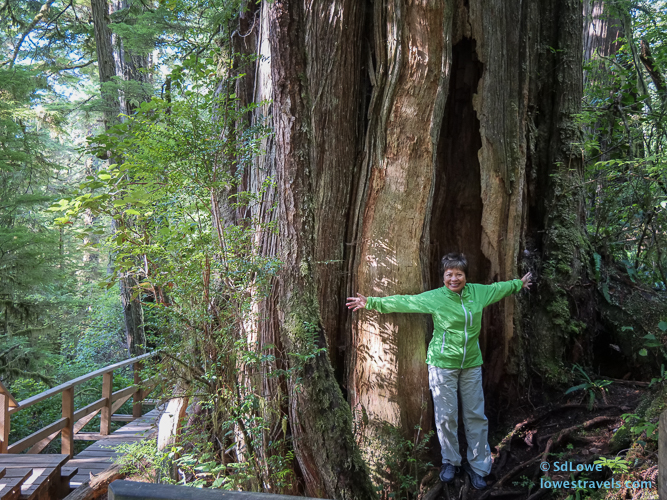 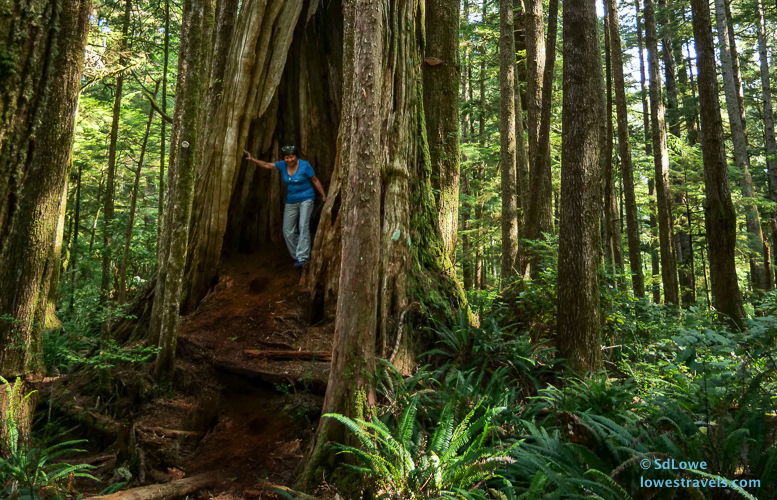 A dwarf exits a tree on the Willowbrae Trail 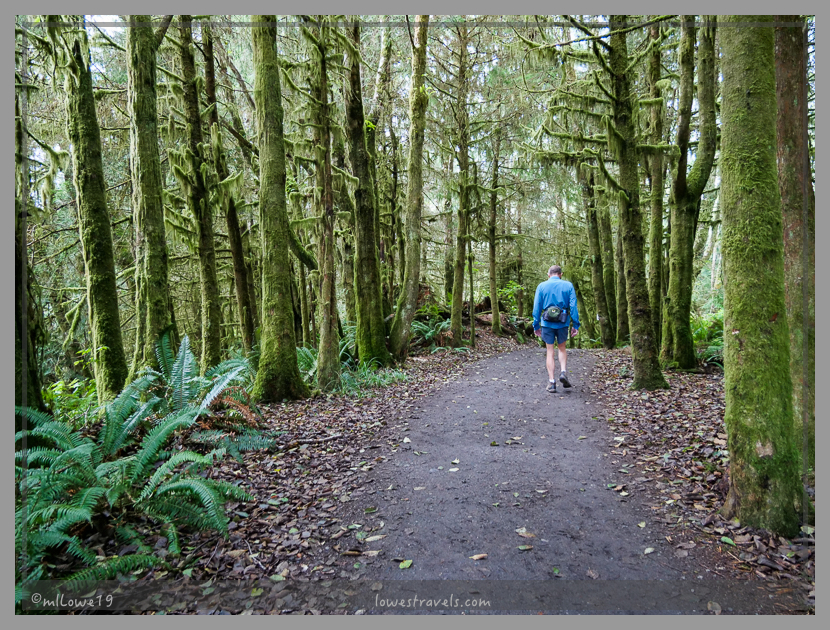 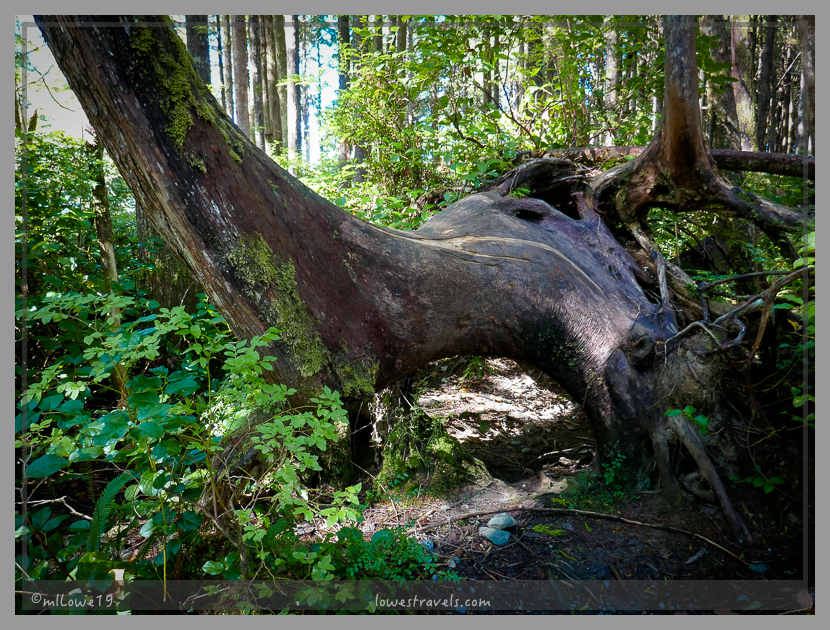 An amazing tree on Tonquin Trail

At one point Steve determined that 7 steps equaled 5′ of elevation gain to figure out how much elevation we were gaining.  The hundreds of steps of ascent and descent gave us a good cardio workout! 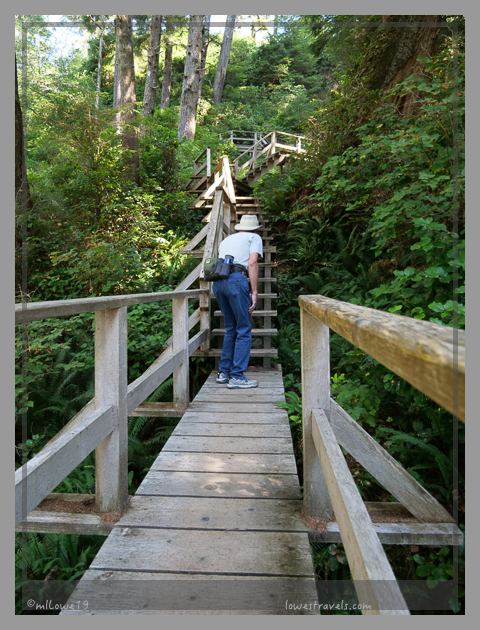 Counting the steps while returning from Halfmoon Bay

At Florencia Bay, some steps weren’t in such good shape

Some areas of the park were logged before it was established, so the trees we saw had grown since then and were called “second growth.”  The rainforest scenery was unique and stunning, like something you might see in a movie or storybook.  The raised boardwalks in many areas only added to the mystique!

Not to be ignored were the beauties beneath our feet:

Banana slugs are the largest slugs in the world! 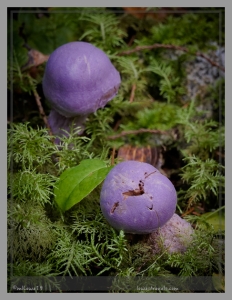 Most of the time in the early mornings it was warm but foggy with mist or rain.  Due to the coastal mountains, the area receives a lot of precipitation, which results in the catchment areas being flooded with continual moisture.  After all, moisture is a main ingredient required for dense lush temperate rainforests, marshes and bogs.  But it was also nice when sunshine cut through the forest later in the day. 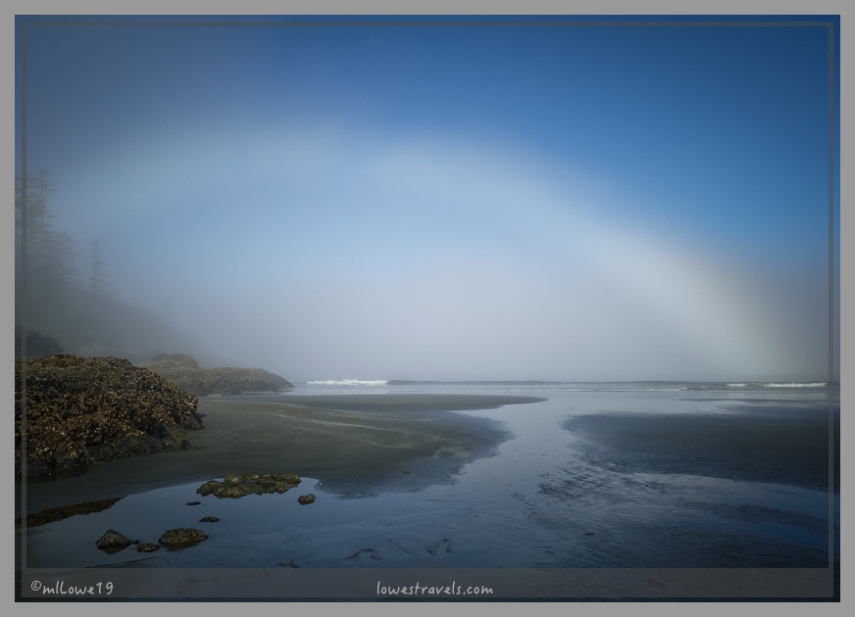 I called this a “fogbow”

On this morning, surfers headed out to the water we couldn’t even see

Some beaches were littered with driftwood brought in by crashing waves… 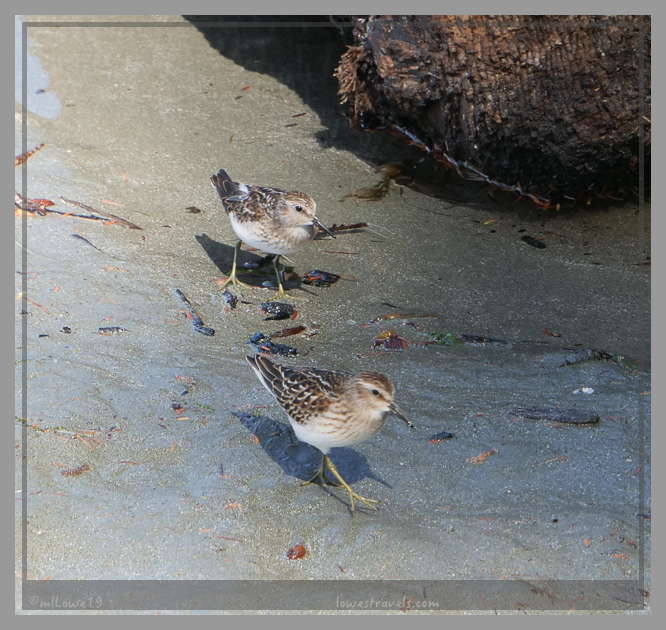 At South Beach, I had a little excitement during my “touch the water” ritual, which gave my honeybunch a good laugh as he snapped away:

A big wave came in… 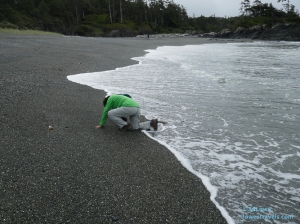 At the Wickaninnish Center, we learned about the interesting natural and cultural heritage of the Nuu-chah-nulth (meaning “along the mountains and the ocean”) people.  They are comprised of many nations, and the nine nations that work with the park have living languages that are still spoken by some people today.  Whale hunting was central to the people’s life and culture, and harpooning a whale was a high honor:

Humpback Whales were the Nuu-chah-nulth’s catch of choice

We discovered new things about the wildlife and special ecosystem that Pacific Rim National Park Reserve protects.  Waves here travel in sets, with extra-large ones hitting every 5-30 minutes, and occasional exceptionally large waves roll beach logs and flood the shoreline. 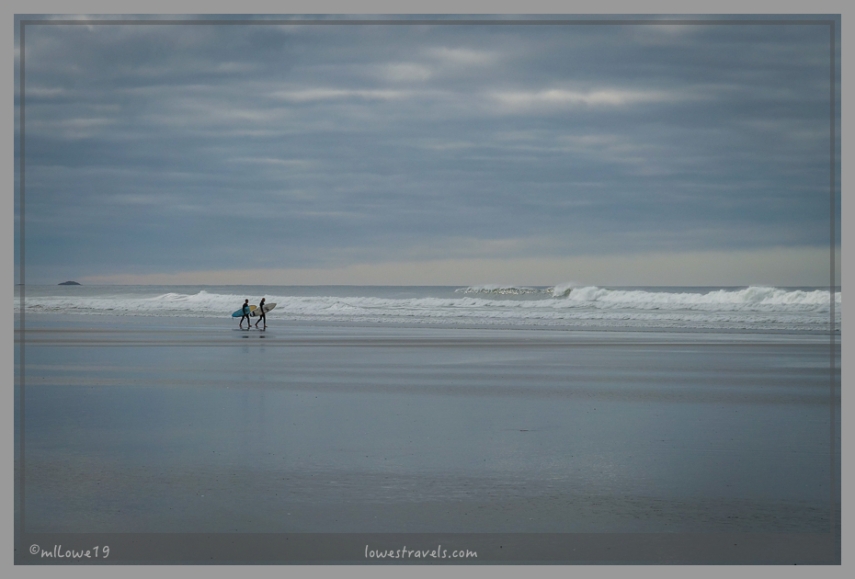 Long beach is a surfers haven.  At least this time I could see where they were going!

I had always wanted to do tide-pooling on the west coast, but kept missing the low tide while we were at Olympic National Park in Washington.  So I was excited to find living treasures close up here: 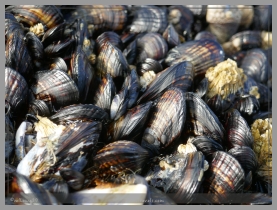 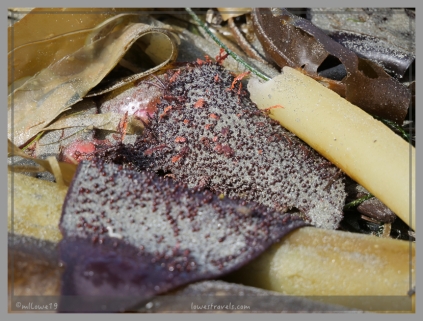 We managed a quick visit to the village of Tofino on our way to Tonquin Trail, but would have liked to spend a lot more time there.  Now we have a great excuse to revisit Vancouver Island’s west coast in the future!

Back at home, Steve once again did a good deed when he noticed that our neighbor’s class-C rental rig would not move.  A specialist was required to fix it, but the folks were so nice that we invited them over for a happy hour and learned that they were Wilbert and Katarina from Holland.  They spoke halting english, but we got along great as they told us about their brief stay on the island and their other travels.  Meeting cool folks from places near and far is one of the best things about RV’ing! 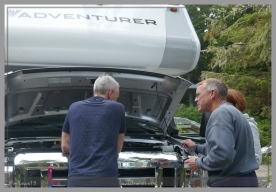 The sunset on our last day did not disappoint:

We enjoyed every moment of our 10-day stay in Ucluelet, so much so that we’re considering flying up for a summer stay in the future.  It’s lush, green diversity is unique and breathtakingly beautiful!

Next up:  Wrapping up our Vancouver Island visit

Categories: British Columbia, Where we have been