What an absolutely stellar hike we took here!  We both agreed Maple Pass Loop Trail was our favorite hike so far this year.  But I’m getting ahead of myself…

At first I was just going to lump this hike with my previous post about Winthrop, but this hike was so amazing that it deserved its own space.  But first some stuff about the national park…

We figured a visit to North Cascades National Park would be a forgone conclusion, considering its location in the Pacific Northwest.  With our home base at Winthrop a one-hour drive away, we decided now was the time to go for it.  So in the last week of July we made it to one of the best-kept secrets in the National Park System.  It seems the lack of roads, unpredictable weather and ruggedness of the terrain all work in concert to make the park less visited.  And perhaps because the best way to explore it is on foot, it’s not so enticing to many people – even though access to this park is FREE! 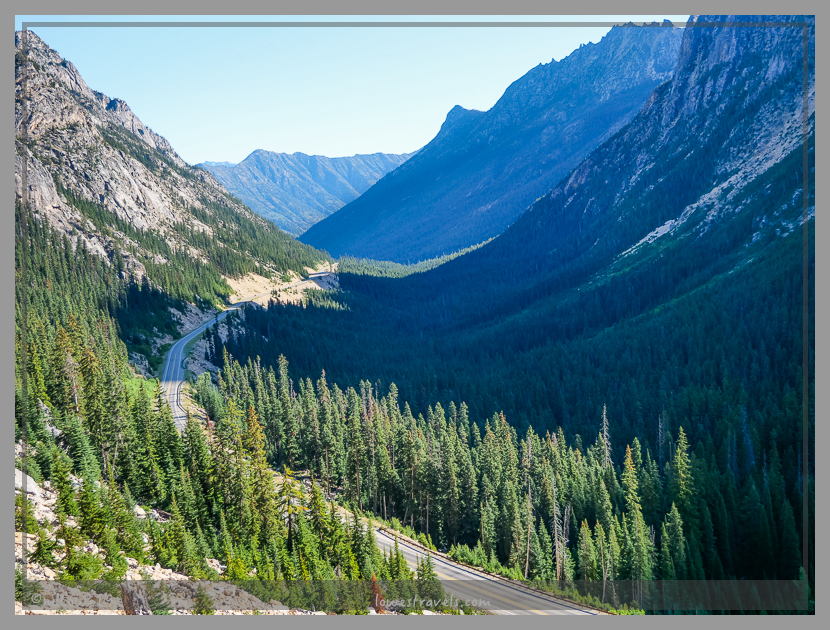 This park is one unit of the three-unit North Cascades National Park Complex, the other two being Ross Lake National Recreation Area and Lake Chelan Recreational Area. This makes it a bit different than most national parks we’ve visited.

There is no designated scenic driving route; North Cascade Scenic Highway (State Highway 20) traverses east to west up and over the mountains and is the only paved road.  It has several overlooks and trailhead access points.  Despite its ruggedness, the park has something for everyone – camping, climbing, boating, fishing, birding, wildlife viewing, horseback riding and educational programs – and yay, awesome hiking!

We left Winthrop bright and early, but got to the trailhead a bit late due to the stunning scenery along the North Cascade Scenic Highway that required several stops and photo shoots.  By the time we arrived at the trailhead there were only a few empty spots left, a sure sign that this is a popular trail. 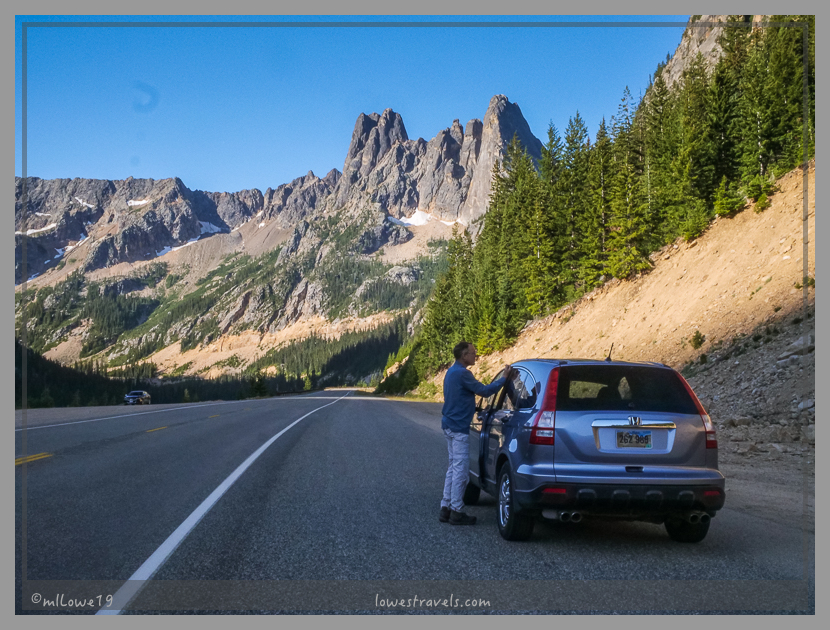 There’s a wealth of hiking trails to choose from, and we picked the popular Maple Pass Loop Trail #740 in the Okanogan-Wenatchee National Forest.  It skirts the edge of the park’s eastern boundary, and because it runs partly through the National Forest a valid National Forest Pass is required for a $5 fee.  Dogs are allowed.

The trail is also called the Heather-Maple Pass Loop Trail or the Lake Anne- Maple Pass Trail. It is a 7.4-mile circuitous ridgeline loop trail, circling a basin and an alpine lake with 2198 feet in elevation gain. Because it is a loop, it can be done either clockwise or counter-clockwise and both have merits, it just depends on whether you take on a steep ascent early on or take steep descent towards the end.  For us we opted for the counter-clockwise with a steady gradual climb and with my hiking poles, I can tackle the steep descent later on.

After about a mile of gradual ascent we caught a glimpse of Lake Ann, an alpine lake cradled in a talus bowl – a glacial cirque created in eons past.  I took many pictures, not realizing it would be visible for quite a while as we climbed the ridge line.

We continued on above the lake, where the trail opened up to hillsides and meadows with swathes of wildflowers beckoning me to stop and take pictures: 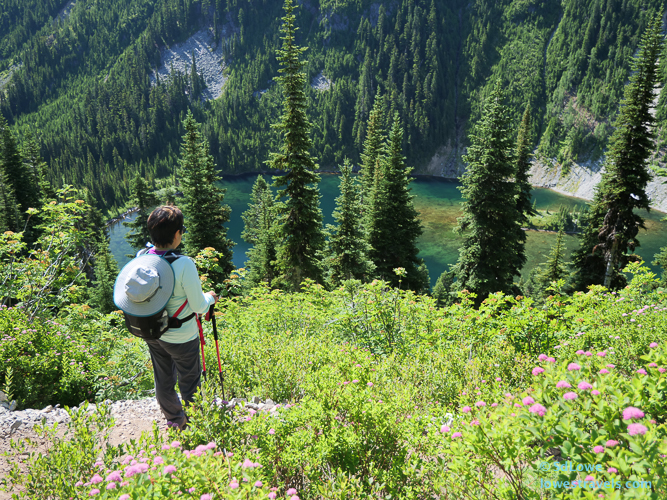 Another pause to view Lake Ann 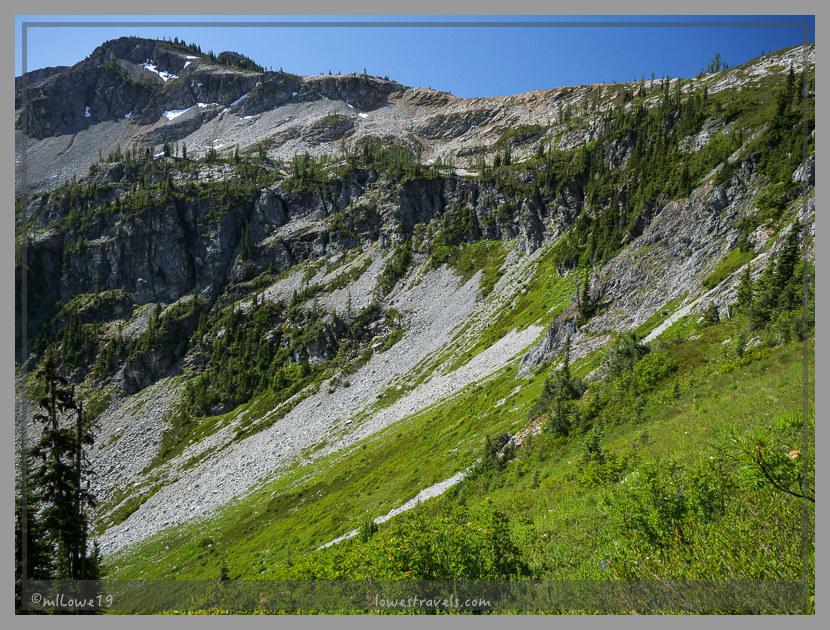 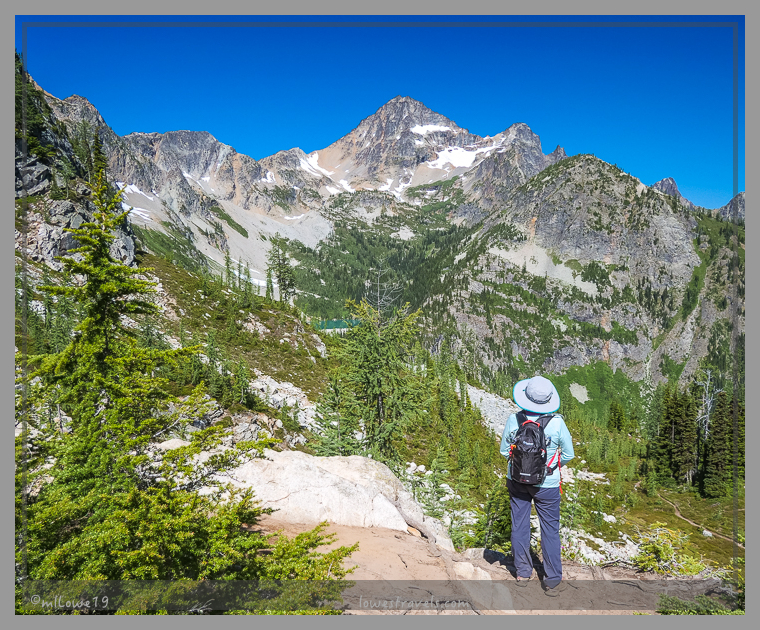 A glimpse of Lewis Lake (in the middle of the photo) 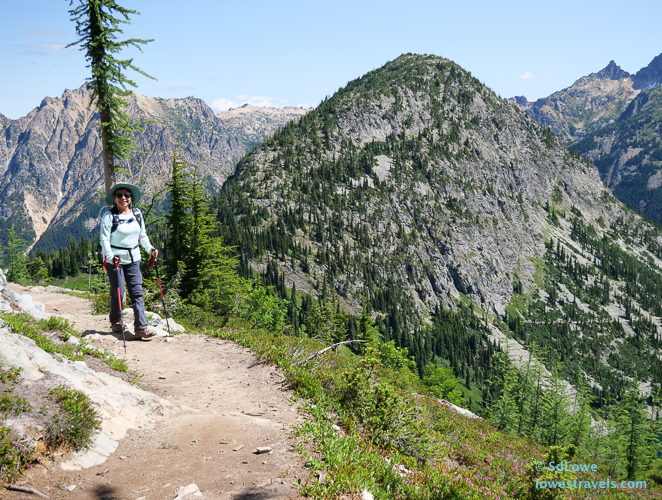 Whew, that was a tough climb!

Looking back at the trail we came up 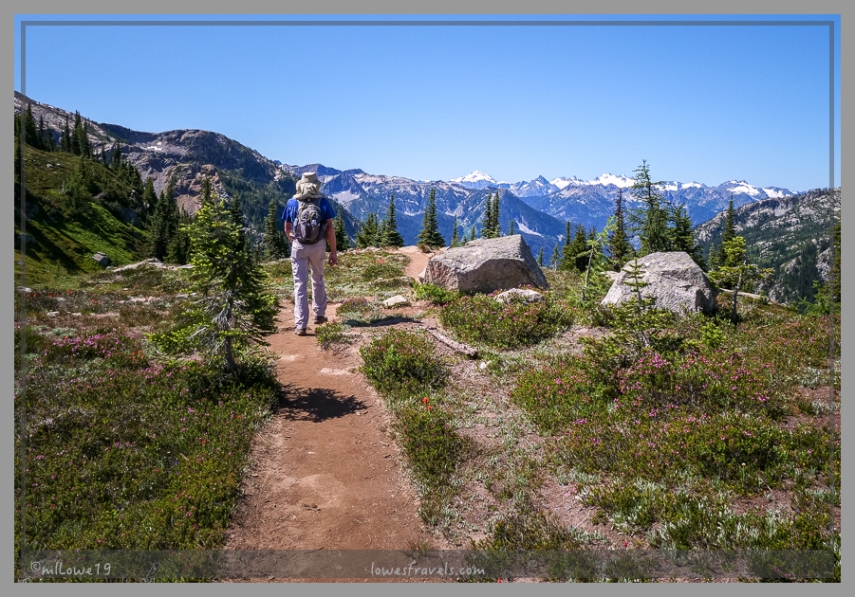 There are about 300 glaciers at National Cascades NP

Gaining the ridge connecting Heather and Maple passes, the panorama stretched like a sea of peaks out in every direction, including some snow-covered ones in the distance.  WOW! 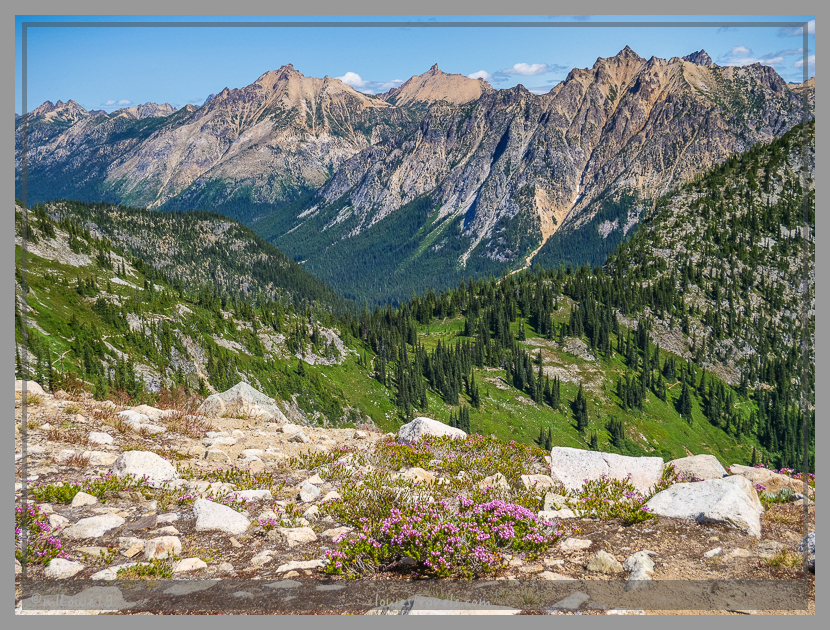 We continued up to the summit on Maple Pass: 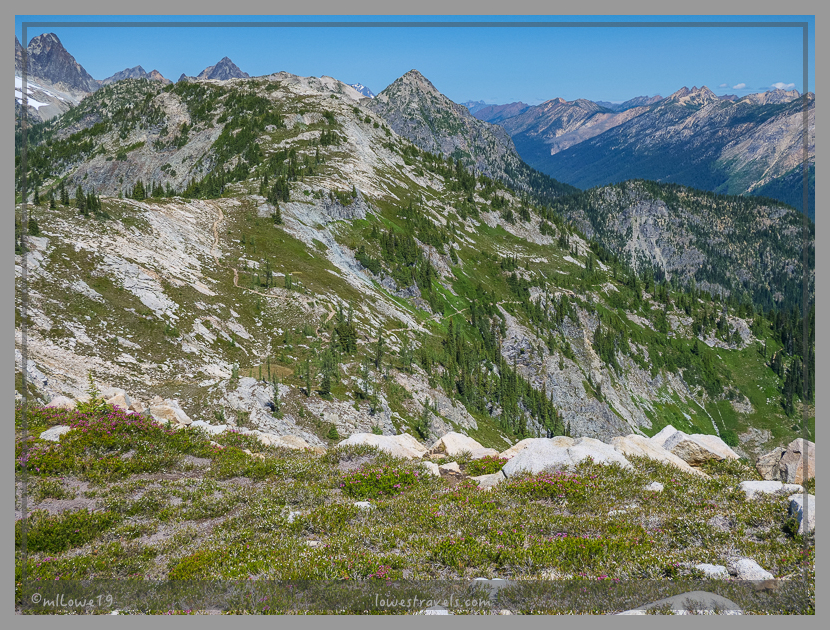 Looking back at our ascent

At the highest point around 7,000′, we stopped for lunch and soaked in the views framed by seemingly endless summits and valleys.  We were treated with dramatic views of the rugged peaks that define this beautiful place:

Next we shifted into low gear for a major downhill effort, beginning with the switchbacks that we had seen from the top.  It dropped rapidly along the ridge line between Lake Ann and Rainy Lake: 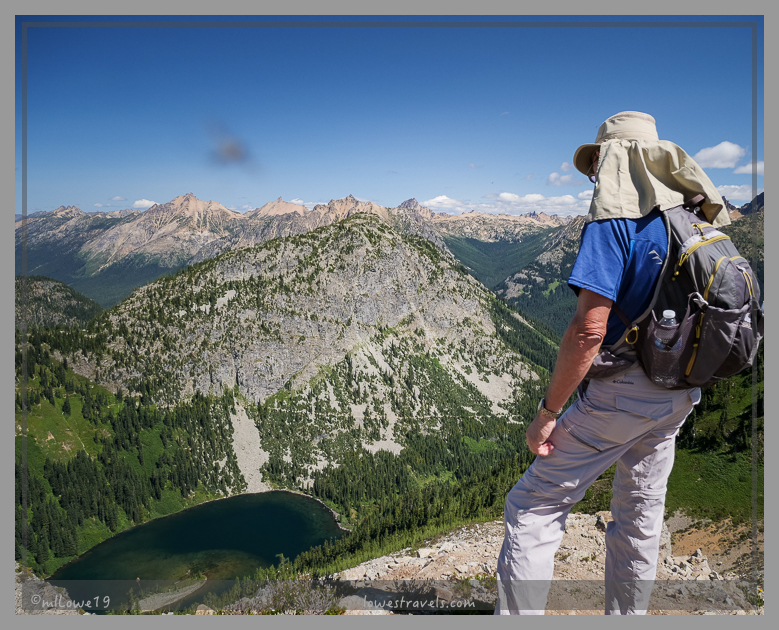 One last look at Lake Ann from the summit 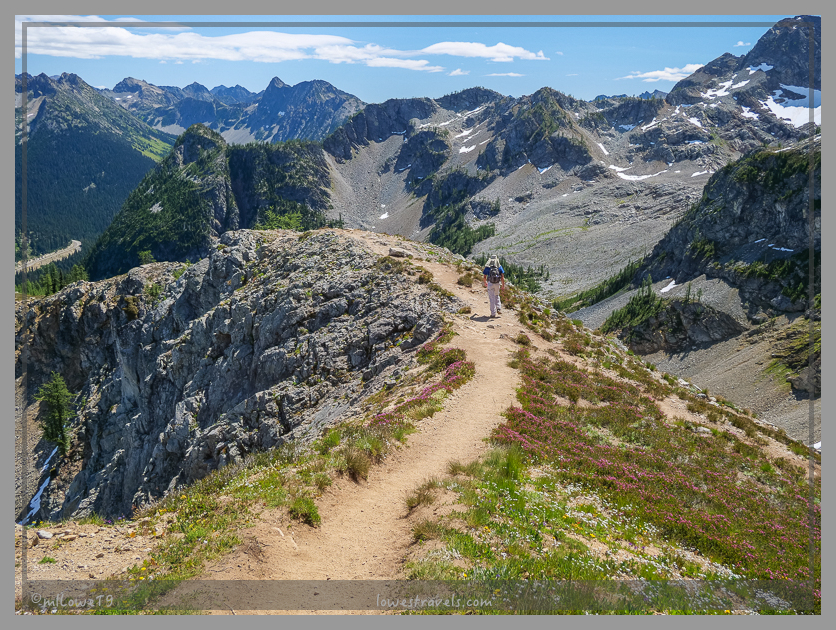 On this stretch the hillsides were painted with a variety of vibrant wildflowers, so you know what happened next – yours truly stopped for a wildflower photo spree! 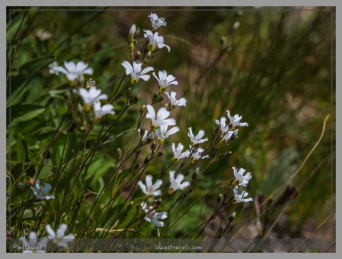 Everywhere we looked the wildflowers were bursting in abundance and colors! 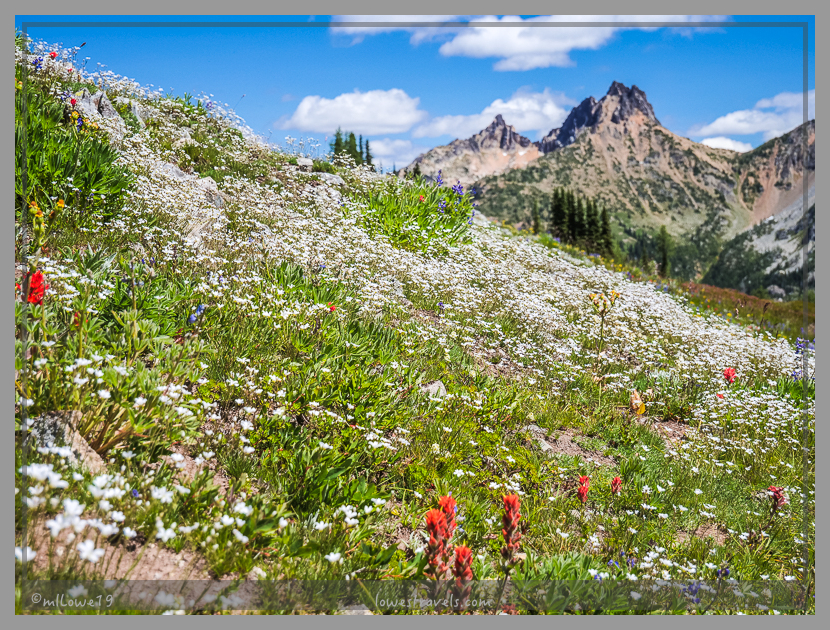 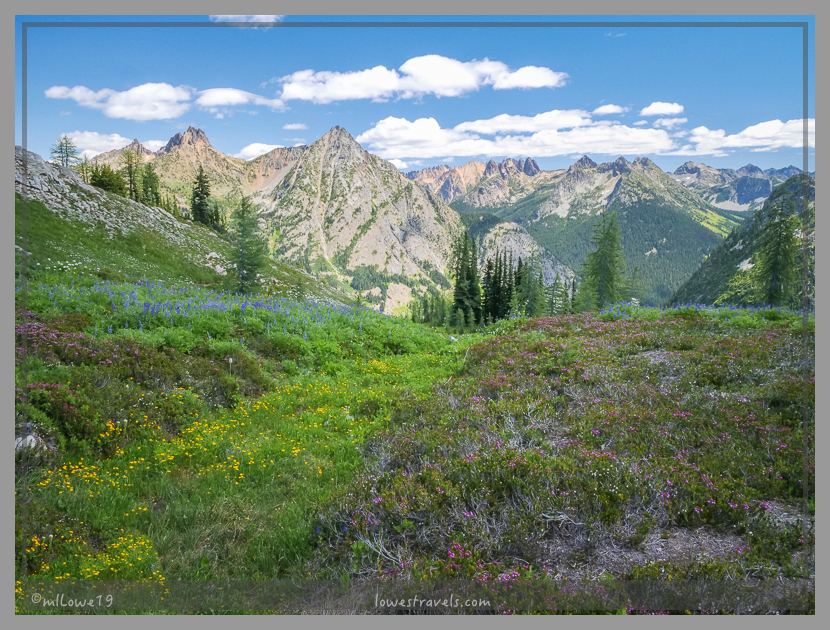 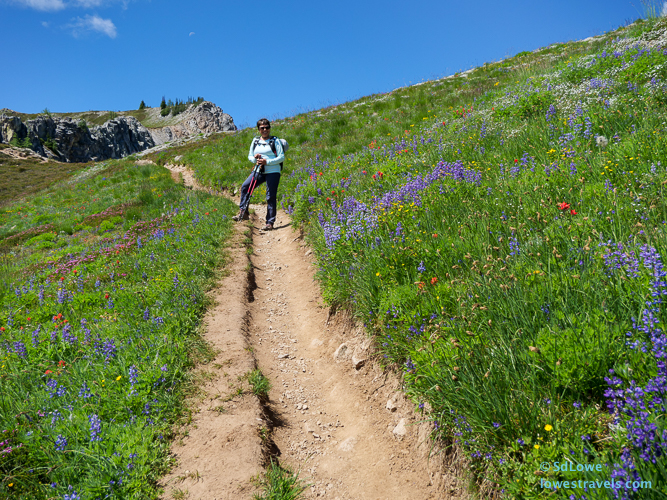 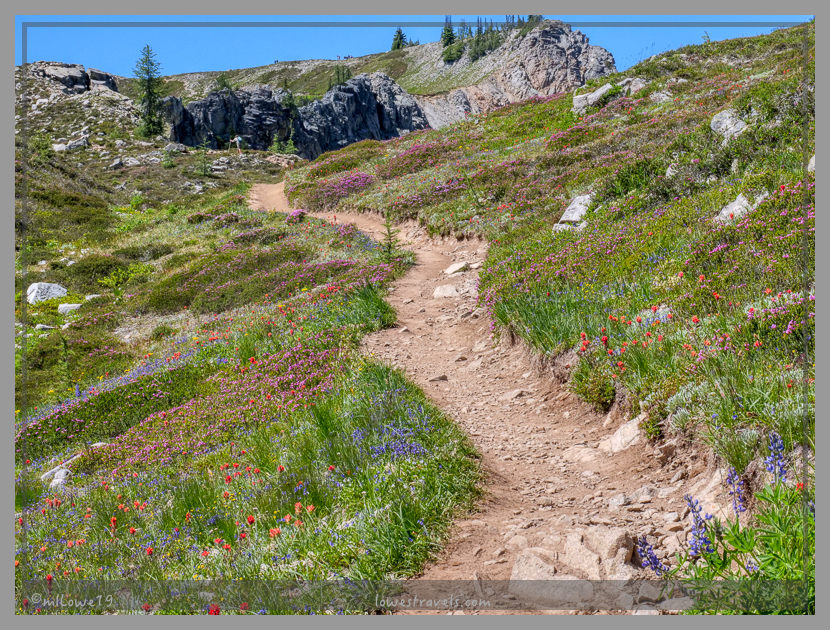 We re-entered the forest and the knee-buckling descent continued: 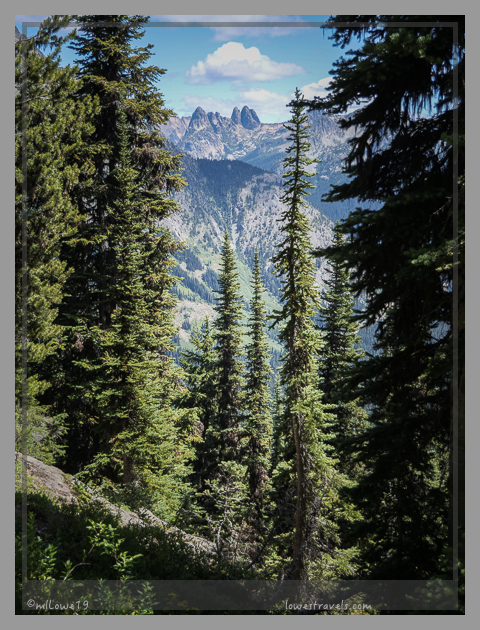 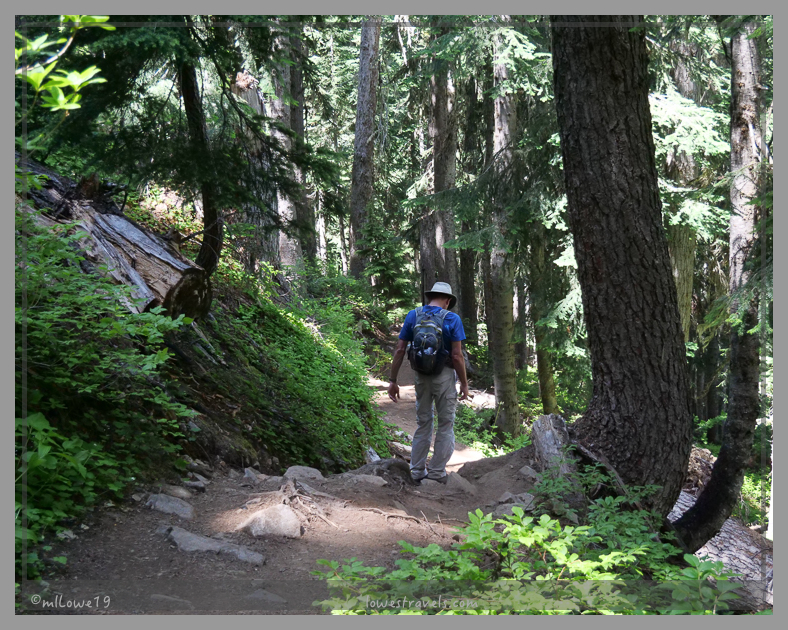 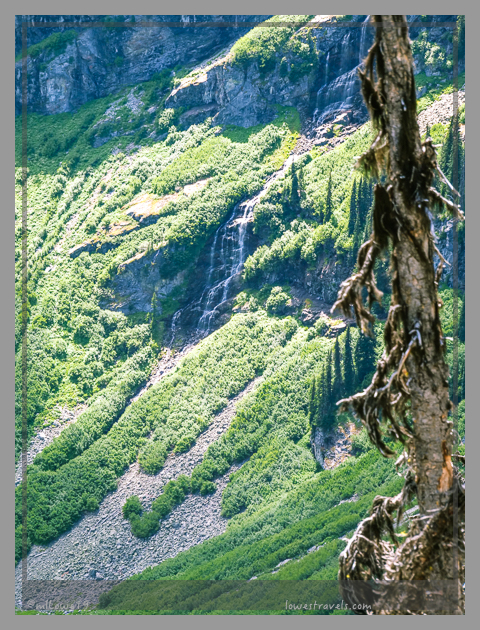 It took us five hours to complete the hike, but that included many stops for pictures and a short lunch break as we soaked in the beauty and fresh mountain air around us.  It was a 7-mile hike of postcard-worthy views that gave me hundreds of pictures to sort through later 🙂

Almost there, Highway 20 in sight

It’s recommended that if you can hike only one trail while here, this is it.  And if I may say so, going in the Fall might make it even better!

With little energy left, we drove 30 miles west to see one of the park’s most iconic features, Diablo Lake.  It’s a reservoir known for its bright turquoise color caused by glaciers grinding rock into a powder that gets carried into the lake by glacial melt:

Kayakers on the lake

Such a beautiful lake, it reminds us of a couple we’ve seen in Canada

This hike was one for the books!

Next up:  Over the mountains and to the ocean

Categories: Washington, Where we have been