Hooray, a milestone for us – this is our 500th post!  Have we really published that many stories?  It’s hard to believe, and we’re so happy to memorialize and share our travels with you, our readers and followers.  We thank you for jamming on down the road with us!

In real time we’re in Tucson, AZ, enjoying gorgeous 90º weather – finally!  I’ve once again put a hold on writing blogs in favor of spending time outdoors enjoying and capturing moments, while hanging out with friends.

So let me go back to our normal programming 🙂

From the Texas gulf coast we headed for the hills, Texas Hill Country, that is.  The state is so huge that driving across it on I-10 covers about 850 miles, and there’s no way we were going to miss as many nooks and crannies as we could along the way.

I just realized we’ve visited all of the state’s seven regions during our travels; the South Texas Plains, the Gulf Coast, the Piney Woods, the Prairies and Lakes, the Big Bend Country, the Panhandle-Plains and now the Hill Country region.  Our previous 28 Texas posts highlight everything we’ve seen and enjoyed here up to this point. 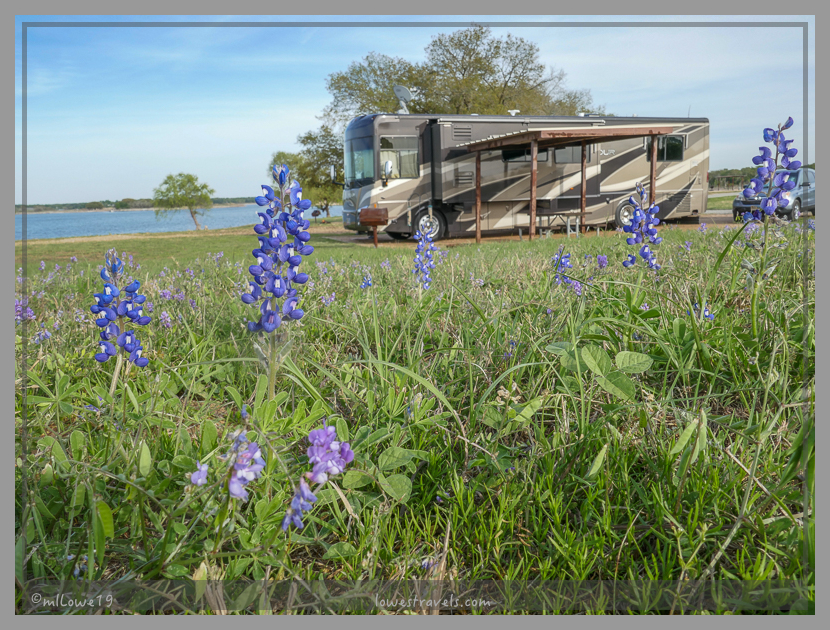 Our first glimpse of what was to come, Bluebonnets at Lake Somerville

The George H.W. Bush Presidential Library in College Station, TX was just a half-hour drive from our site at Lake Somerville COE.  We spent several hours learning about the lives of the president and Barbara Bush before and after his presidency.  Their love of family, sense of adventure and strongly-held value of civility and service to the country was inspirational.  The museum is well organized, detailed and comprehensive.  We recommend it regardless of your political affiliation. 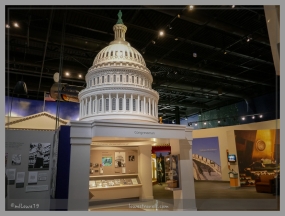 We heard and read a lot about the many things to do while in Austin, but big cities don’t appeal much to us.  We did do three things during our short visit: toured the state capital building, ate some good BBQ and took a hike at McKinney Falls State Park.

We were able to catch a guided tour for our 9th state capitol visit.  By joining it we were able to learn more details than from a brochure, but other than being impressed by the huge size of the building we were a bit underwhelmed.

Explaining the reverse of the state’s seal 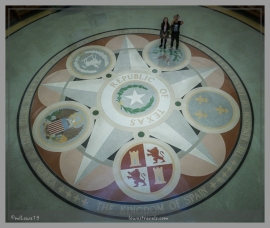 Six seals of the countries whose flags have flown over Texas 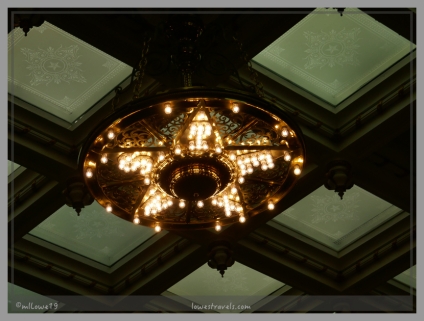 All 450 doors have copper hinges 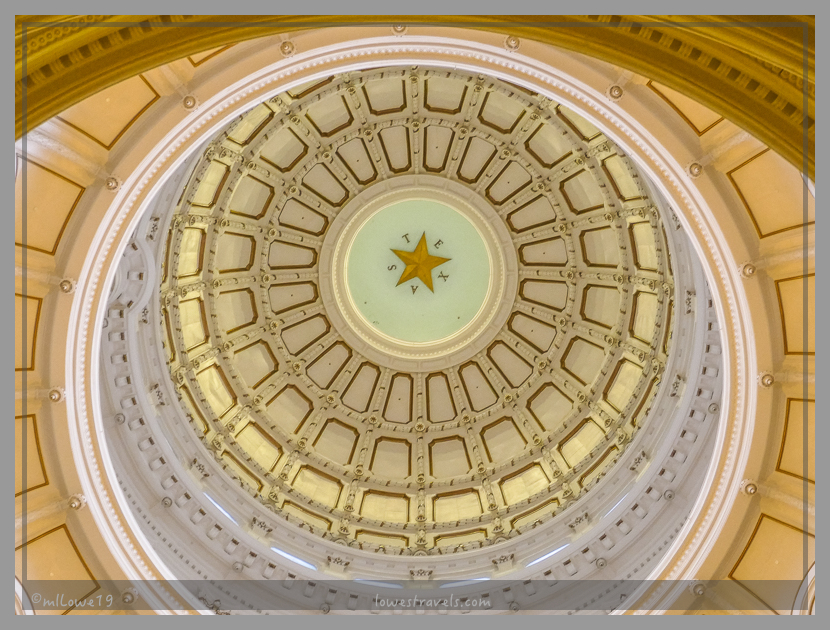 The star in the dome measures 8′ point-to-point, we’re definitely in Texas!

And we came to eat some of that famous Texas BBQ!  Although we probably haven’t worked off all the calories gained from our cajun country adventures, here we are again on another gastronomic tour.  Fortunately we had a list of places to visit from John and Sharon, plus Kevin and Laura’s excellent post detailing Austin BBQ.  We only had time to check out two of them, so we tried Smitty’s Market in Lockhart and Rudy’s Country Store in Austin.  Although a bit of a “rustic” experience (spoons but no forks at Smitty’s?), we thought the meat at both of them was yummylicious! 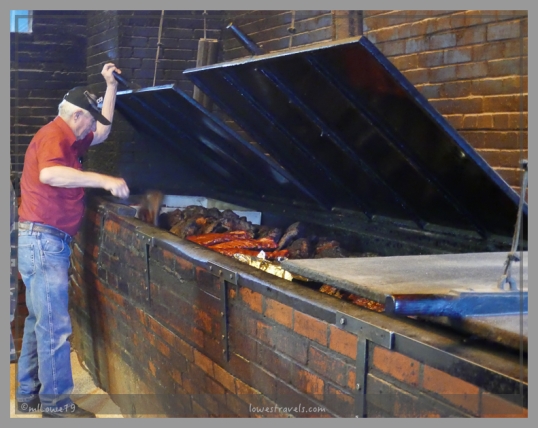 At Smitty’s, the line starts here as you drool over the pit

We preferred the brisket at Rudy’s

We almost ate it all!

To work it off, we took a hike at Mckinney Falls State Park: 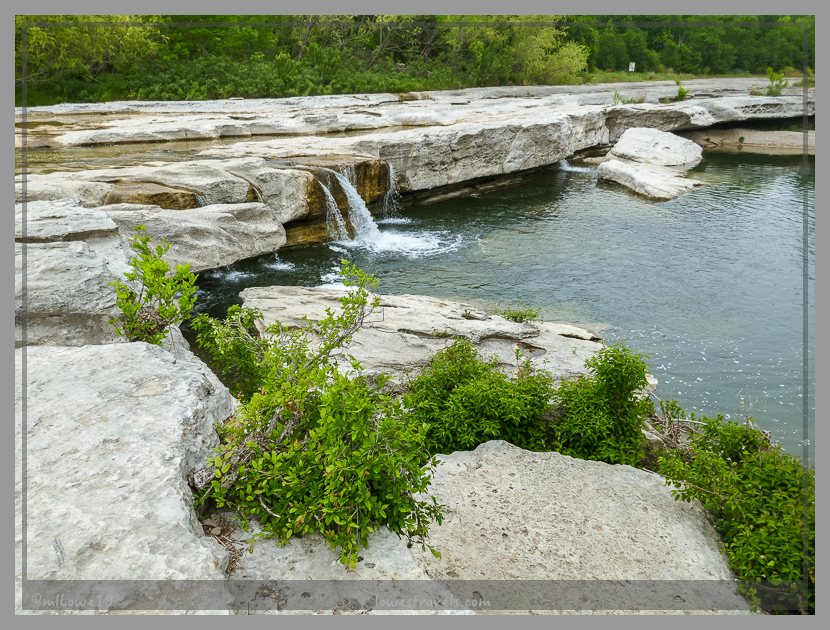 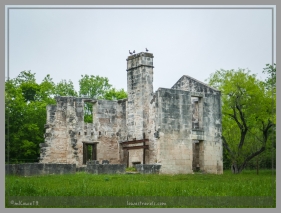 Just a small section of a Bluebonnet meadow

Next we moved on to Fredericksburg for a rendezvous with our friends Harry and Chris, who were visiting family in the area.  They signed us up for a tour at Garrison Brothers Distillery where we could taste some serious Texas bourbon.  We had a great time tasting and smelling bourbon in the making. 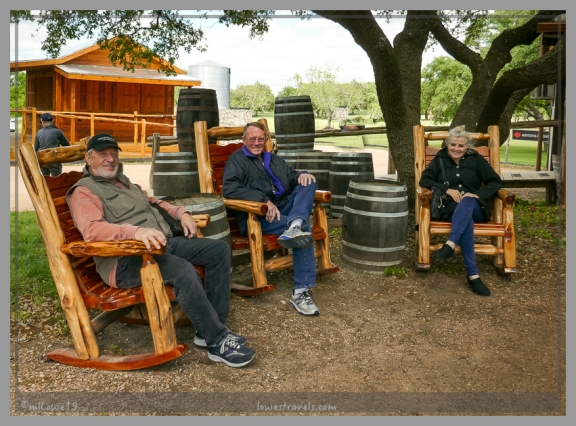 Waiting for our turn 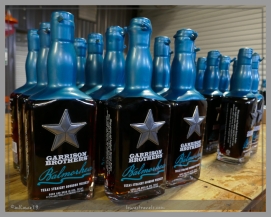 One of the flavors

The boys had fun

Fredericksburg is also the center of Texas Wine Country.  Its wine production dates back to the original settlers who used the native mustang grape to produce wines.  So when the four of us Californians got together we had to taste the local wines and give our expert opinions.  Although we liked the red wines at Grape Creek Winery, the $21 tasting fee impressed us more than anything else there!

After that we all hung out at our camp site next to the local airport and enjoyed an unexpected free airshow.  Apparently a group of WWII aircraft owners were there on a fly-in lunch, and we were the benefactors of a practice for an airshow with several formation flights over the airport.  Steve’s pilot buddies would have been in heaven! 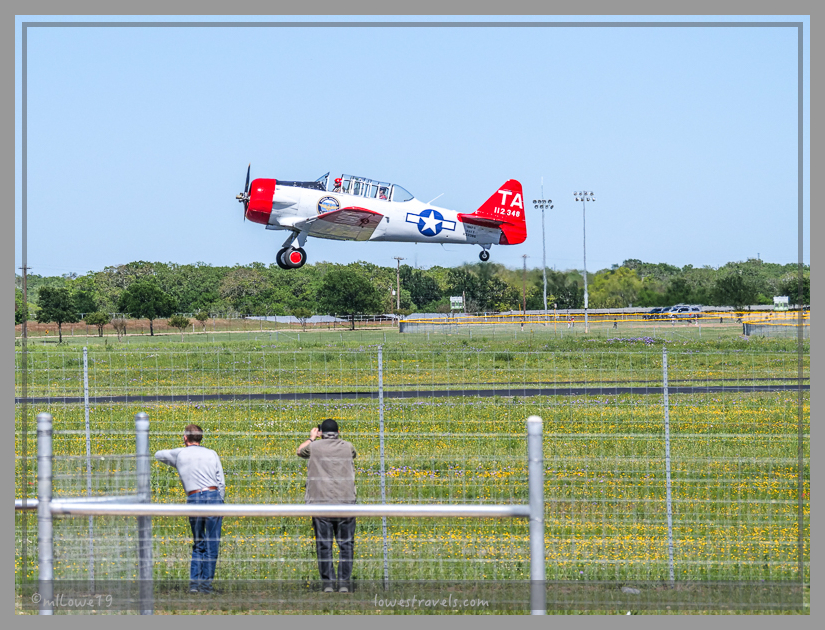 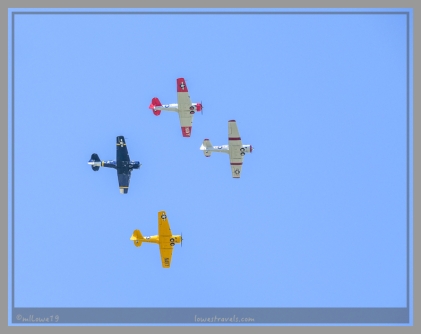 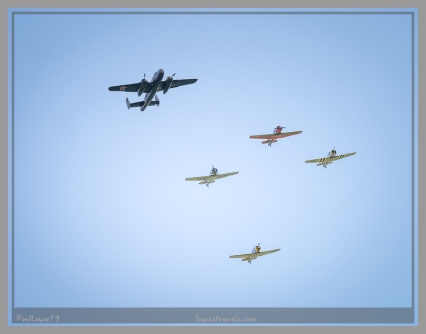 Thirteen planes heading for the moon 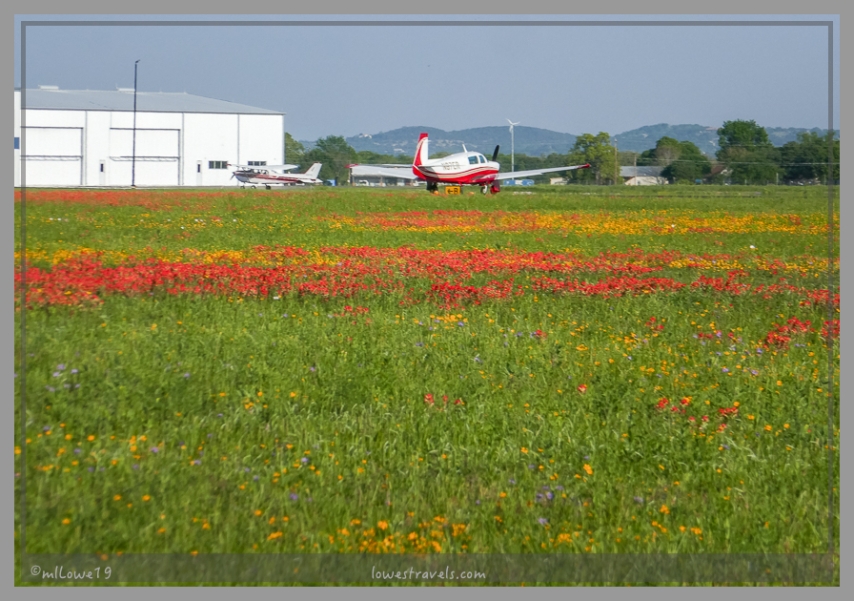 Oh yeah, there were some flowers here too!

We stretched our legs and pumped up our lungs at the pink granite dome known as Enchanted Rock, which rises 425′ in elevation.  We’d been flatland walking for several months, and hiking this trail to the summit was an awesome return to what we love to do! 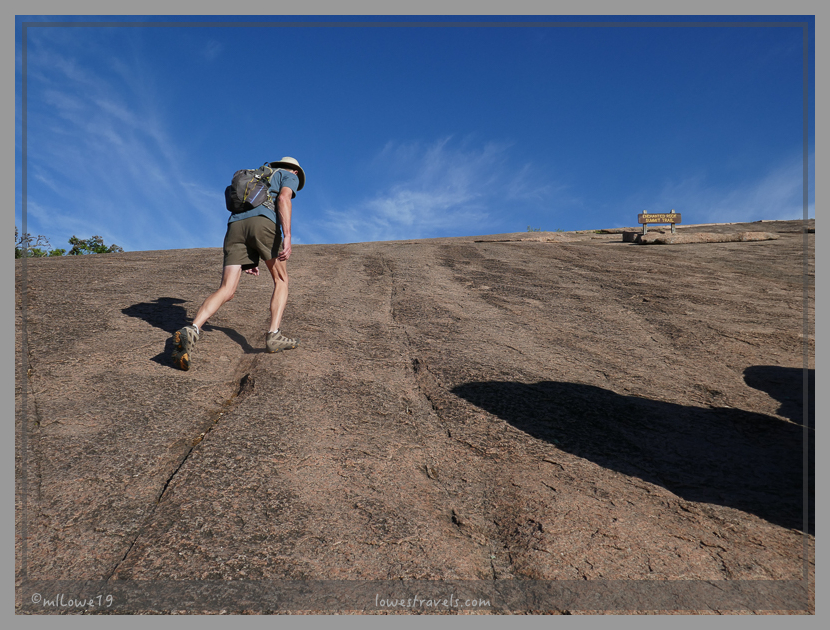 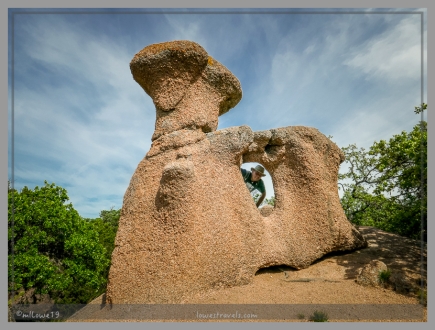 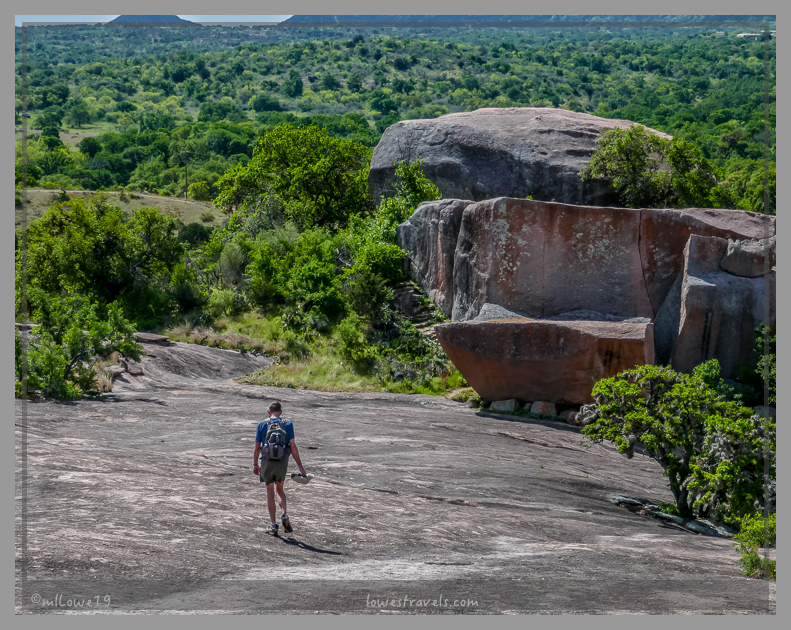 Granite that broke away and tumbled down

The weathered dome is known to geologists as a monadnock.  See the hikers up there?

The Texas Hill Country had been on my wishlist for some time, and thanks to our wintering in Florida and heading back along the southern coast I can check it off my wishlist.  Having seen pictures of hillsides carpeted with Bluebonnets and other wildflowers, I yearned to see it personally.  And here we were oohing and aahing at all the patches of colors along the highway, on empty lots, in meadows and almost everywhere else!

A good place to see wildflowers this time of year is at the Lyndon B. Johnson State Park and Historic Site.  Our 36th president was a native son of the Hill Country, and together with Lady Bird he left a lasting legacy in the hills.  After watching a movie about the president we walked around the complex that included an interpretive center about his life.

A commoner emulates LBJ walking among the wildflowers 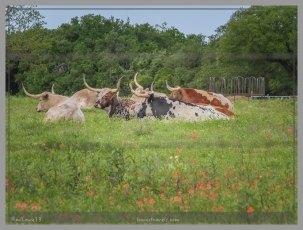 We bought a permit to follow an auto tour at the Lyndon B. Johnson National Historical Park.  Unfortunately the Texas White House was closed due to structural issues, so we stuck to driving around the ranch where LBJ was born, lived, died, and was buried.  After the president’s death in 1973, Mrs. Johnson lived at the ranch part time until her death in 2007.  Their holdings included approximately 1,570 acres, 674 of which are now federal land.

If you like flowers like I do, then Wildseed Farms is a must-do when in Fredericksburg. They’re the nation’s largest working wildflower farm, growing over 200 acres of beautiful flowers for 35 years.  They have walking trails, and admission is free – yay! 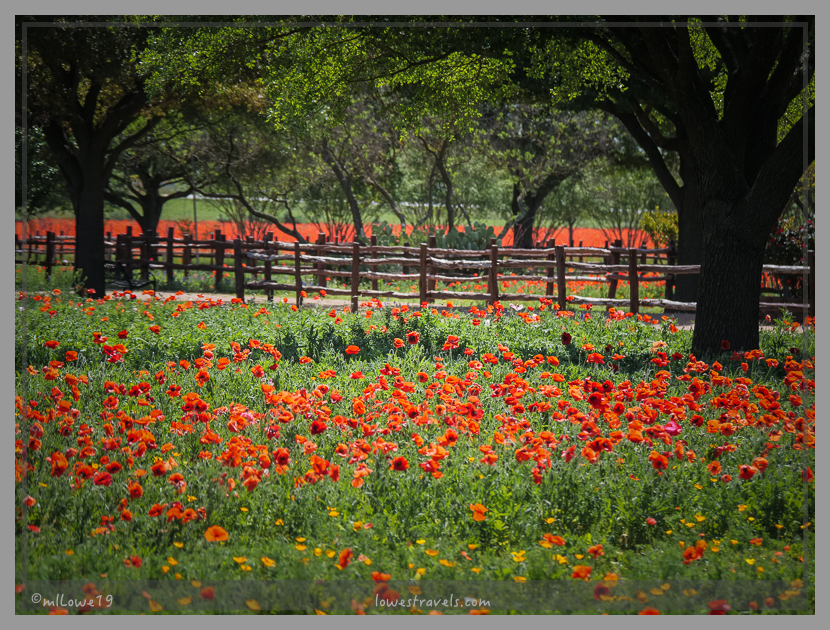 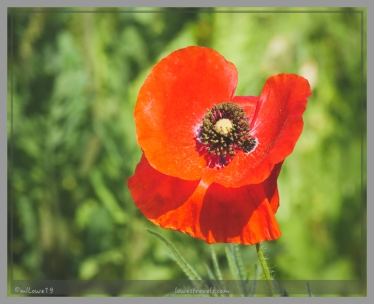 Wildflowers are the big thing in hill country, and the whole area turns into a painter’s palette of blues, reds, yellows and purples dotting the fresh green of spring. We drove in and around the Hill Country and the extra-wet winter made it a sight to see that even took Steve’s breath away! 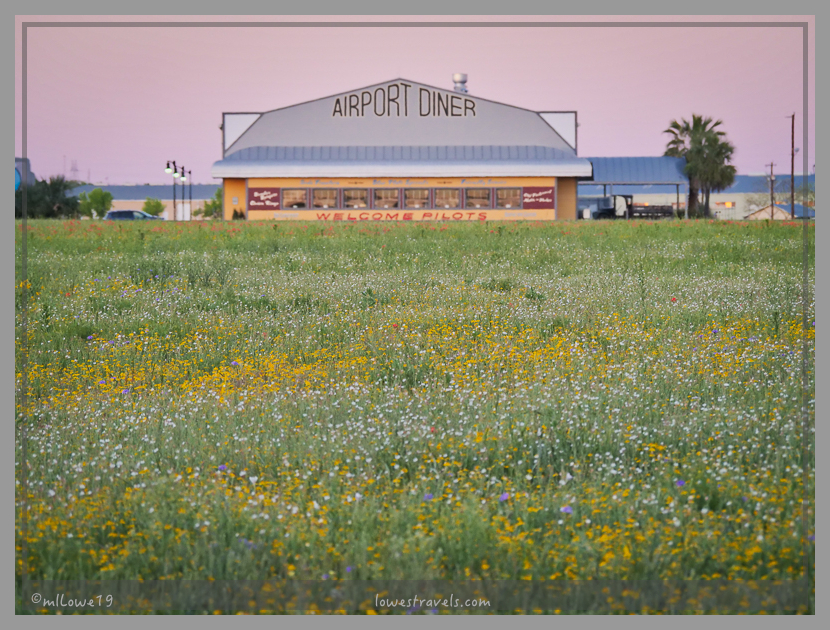 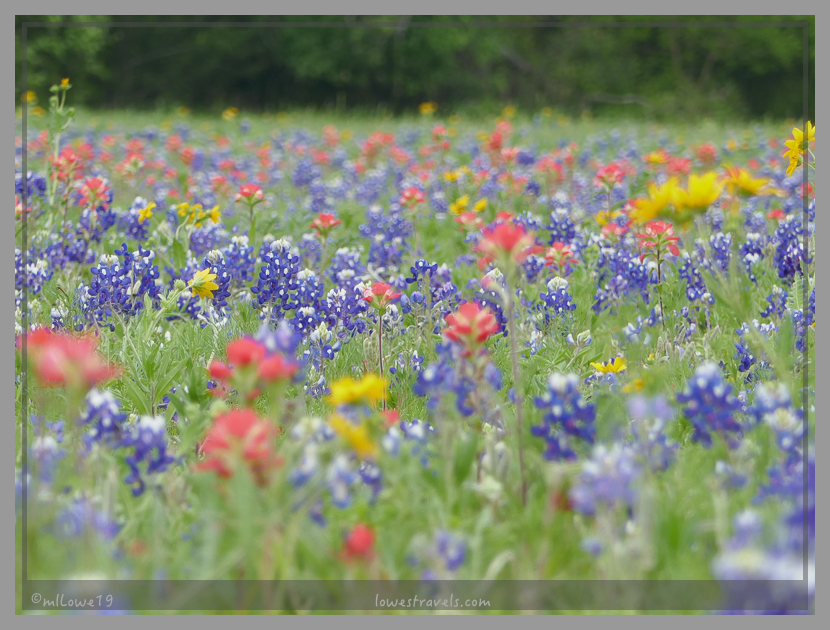 So I can tick another one off my bucket list – springtime in Hill Country – I couldn’t ask for more!