Leaving Florida behind was the “official” beginning of our 2019 westward migration.  We started earlier this year than we did in 2014, and moved more quickly through Alabama and Mississippi.  We’d learned our lesson on that last trip at the end of April – the tremendous thunderstorms we rode out one night near Pensacola still hold the record for dumping the most rain there in a 24-hour period.

Our stop at Dauphin Island was a bit out of the way, but we wanted to visit one of our favorite islands one last time.  We were looking forward to our third visit, the first being in March 2013 and the second in March 2014.

And why, you may ask, do we love this little island in Alabama so much?  Well, for one thing nothing has changed much since our first visit here.  The bakery and seafood markets are still running a brisk business, and the laid-back vibe and slow pace lifestyle can still be felt.  Although it must certainly be busy during spring break and the summer months, we love hanging out at this time of the year to check out the birds and live on “island time” for a while.

Centuries old Live Oak Trees at Cadillac Square.  In 1717 this is where the home of the French Governor General of Louisiana was located

Back of the Boat House

My first post in 2013 described Dauphin Island and what we explored then.  At the eastern point is Fort Gaines, and history buffs may be interested in this post about our visit there. 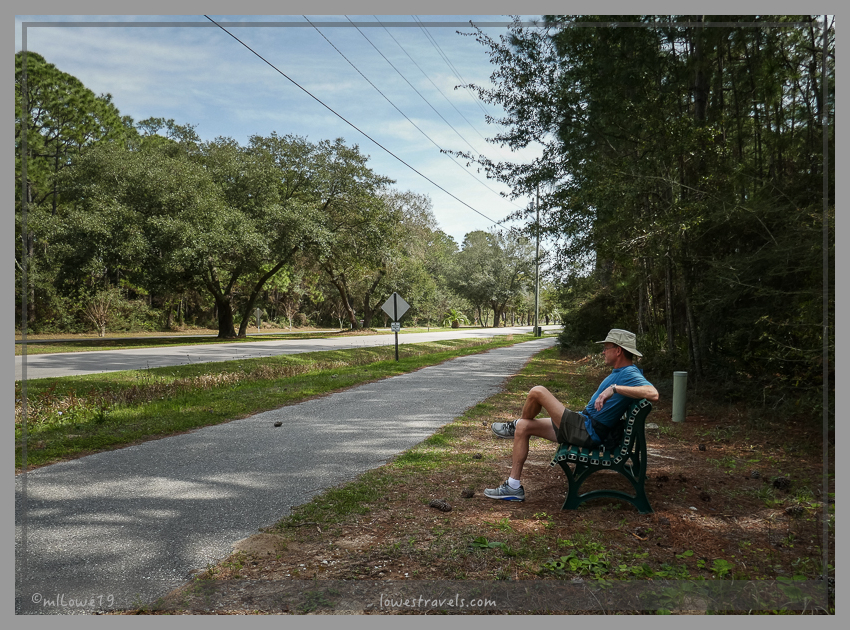 The only deviation from our previous visits was the dense fog that periodically enveloped the island on several days this time.  But the birdies, awesome food and nice long walks on the beach certainly didn’t disappoint!

Many of our feathered friends make a migratory stop on the island every spring, and our second visit in March of 2014 happened to be a particularly good time to see neotropical migratory birds we’d never encountered before.  Check out those travel-weary but oh-so-cute and colorful birdies here.  And because it was such a birding bonanza, I happily tagged along with Laurel and Eric during that stay as we sighted even more new birds.

We were a bit early for spring migration this time, but we walked again at the Audubon Sanctuary to see if the resident Great Horned Owl had new babies.  There was indeed a cute little chick, and we wondered if this was the same owl we first saw six years ago, since they normally return to the same nest each year.

We checked out the current resident at a nest near the other end of the sanctuary:

The foggy weather added to the slowness of time and didn’t hinder us as rain can.  It was always warm and we just waited for the fog to lift before enjoying our outdoor activities or heading over to Skinner’s Seafood Market for our daily seafood fix.  We were also very happy to learn about the crab omelets served at the Lighthouse Bakery on Sunday mornings – wow!  That one was worth waiting in line for.

Daily lunch to go – let’s get home and open those cold beers! 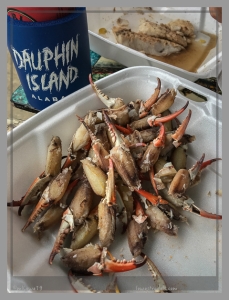 In line for a yummy crab omelet 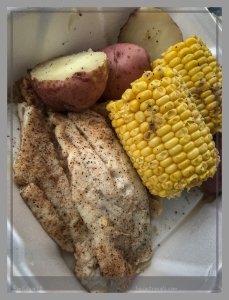 As time permitted, Steve was able to replace our failed icemaker – what a handy guy! 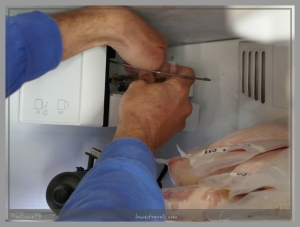 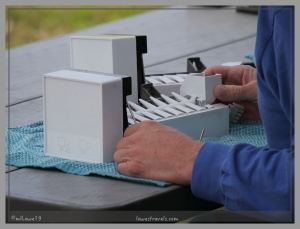 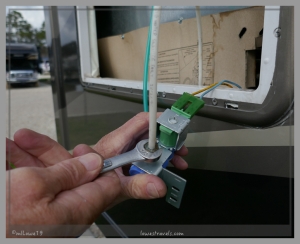 When the fog lifted we simply crossed the road from Pelican Nest RV Park to stroll along the public beach.  We also enjoyed a 7-mile drive to the west end of the island, which we had previously taken on our bikes.

Strolling all the way to Pelican Island, a strip of sand to the south 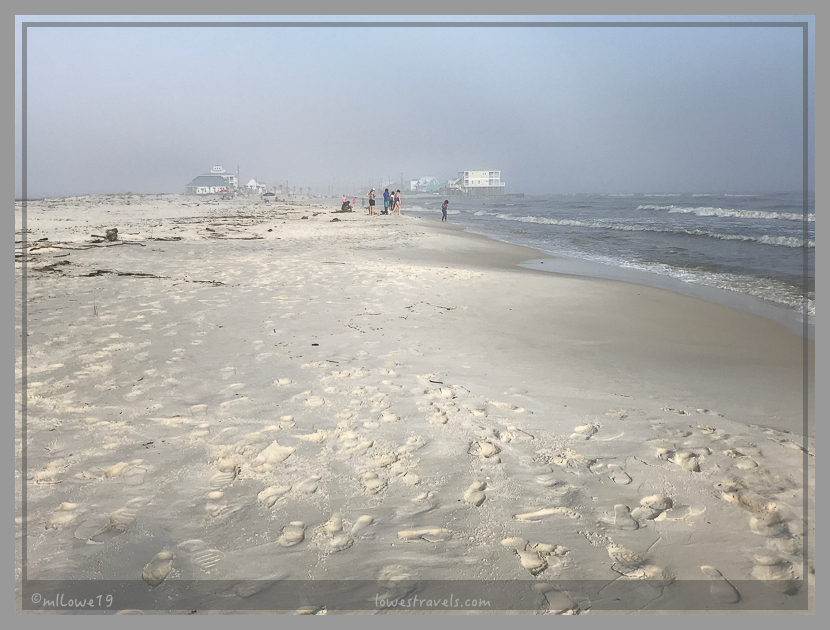 Another day I ventured to the beach hoping to snap a picture of the skittish Reddish Egret.  While doing so I got a text from Steve; he was on the pier watching some amazing cloud formations roll in.  I stood transfixed watching them as the temperature dropped and the wind picked up.  We did a fast-walk back to Betsy, but fortunately this little storm passed east of us. 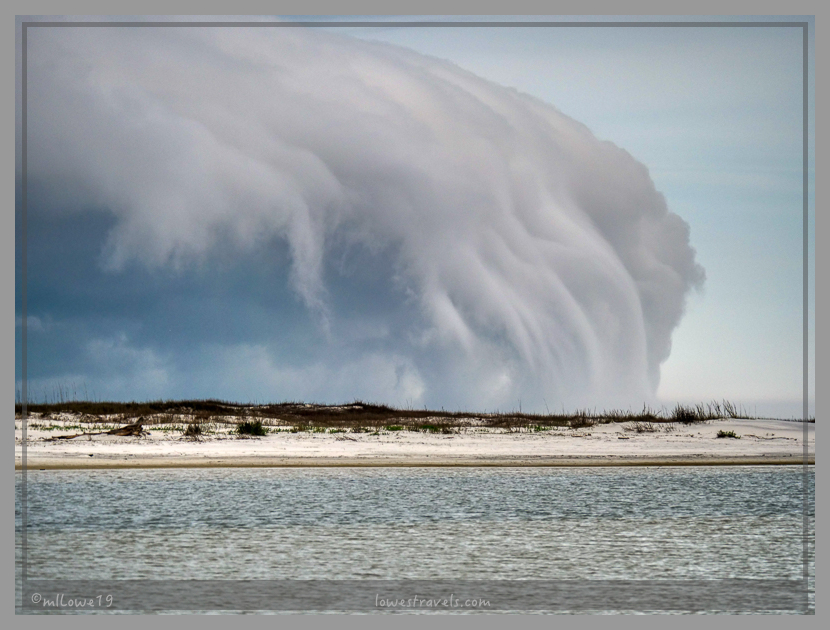 The end of the clouds dumped rain to the east – they missed us, yay!

Dauphin Island is designated the “Sunset Capital of Alabama”, and in our previous visits we’d had clear skies while we watched the sun dip below the horizon, offering fleeting colors as dusk consumed the island.  This time we were graced with only one gorgeous setting sun: 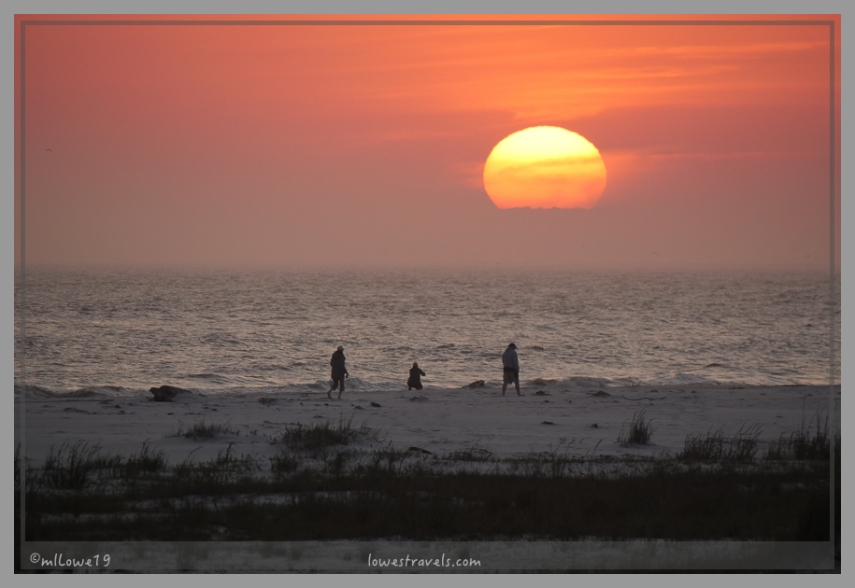 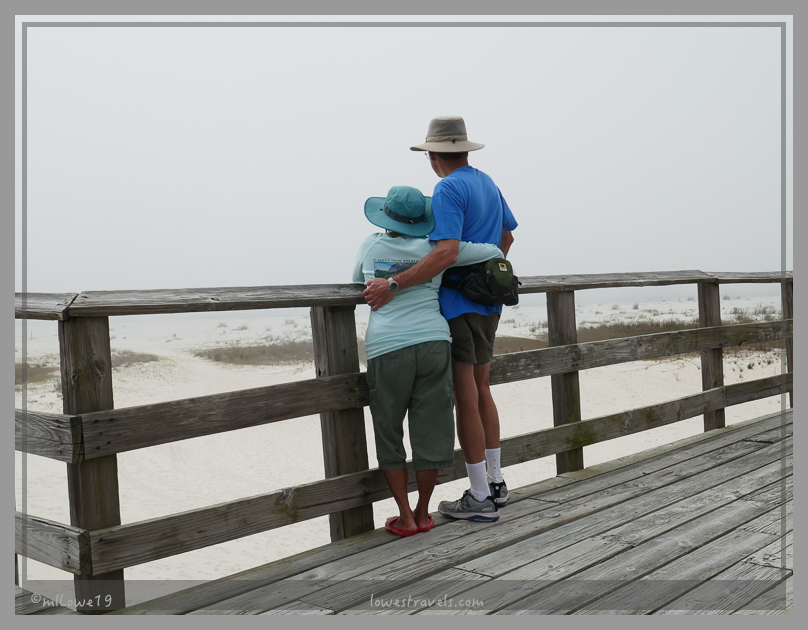 And with that we bid goodbye to our favorite jewel of the Gulf Coast that has captured our hearts.

Next up:  Finishing our tour of the Gulf Coast

Categories: Alabama, Where we have been