Dodging storms from Memphis to Huntsville to Gaffney

When we planned this route last year, we thought most of the bad storms occurred in the Spring months.  But it turns out that Fall can be equally nasty – as we found out firsthand.  Well, now we know!

It didn’t help that we added a couple hundred miles to our route so we could get Betsy’s chassis maintenance completed in Gaffney, SC, at what is arguably the best Freightliner shop in the country (this is where they build the chassis, after all).

After sitting through a traffic jam ourselves a few days ago, this was one of several many-miles-long backups we saw in the opposite direction as we drove east… 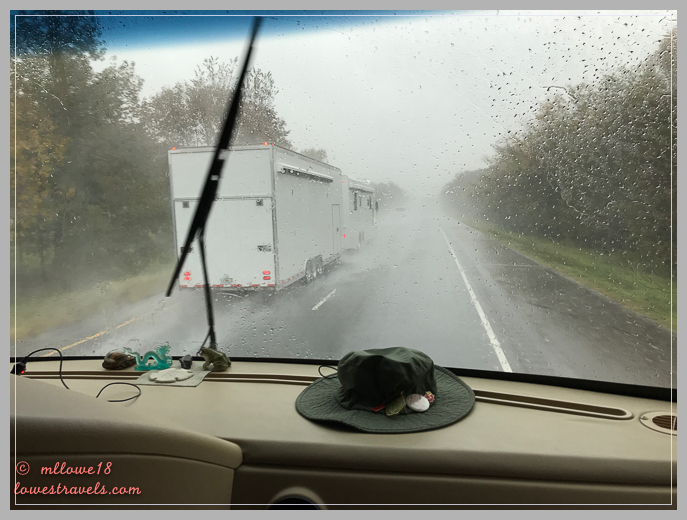 …and the rain continued to make driving miserable

Our home base at the western border with Tennessee was at Tom Sawyer’s RV Park in West Memphis, AR.  Several of our RV friends have stayed at and recommended this place, which sits right on the Mississippi River where campers can observe lots of tugboat and barge traffic.

The barges pushed by the tugboats are hundreds of feet long, and you wonder how they do it

The Queen of the Mississippi cruised by too

The following day was dedicated to a Memphis visit.  We weren’t impressed by what we saw, perhaps because it was a Sunday or such a gloomy day.  The city and its streets were quite run down, and Beale Street, “Home of the Blues”, was crawling with police and some unsavory characters.

Beale Street on a Sunday morning 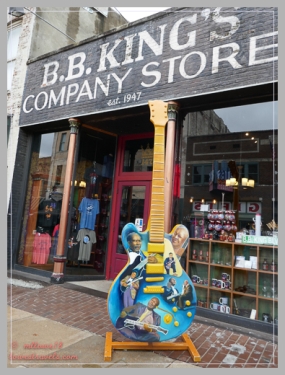 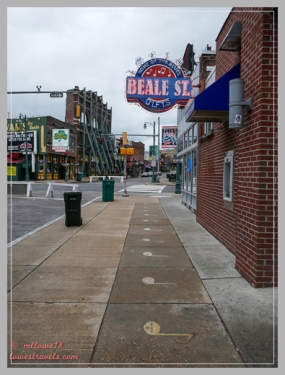 Beale Street is just one of several historic landmarks in Memphis.  After an hour there we drove to the Lorraine Motel where Martin Luther King Jr. was assassinated on April 4, 1968.  The motel is now part of the complex of the National Civil Rights Museum, and it includes two cars that were parked there on that fateful day.

The wreath marks Dr. King’s approximate location at the time of his assassination

Next we headed off to Sun Records, where in the 1950’s the small recording company gave many unknown black and white artists their start in the recording industry.  The list of stars includes Johnny Cash, B.B. King, Roy Orbison and of course Elvis Presley. 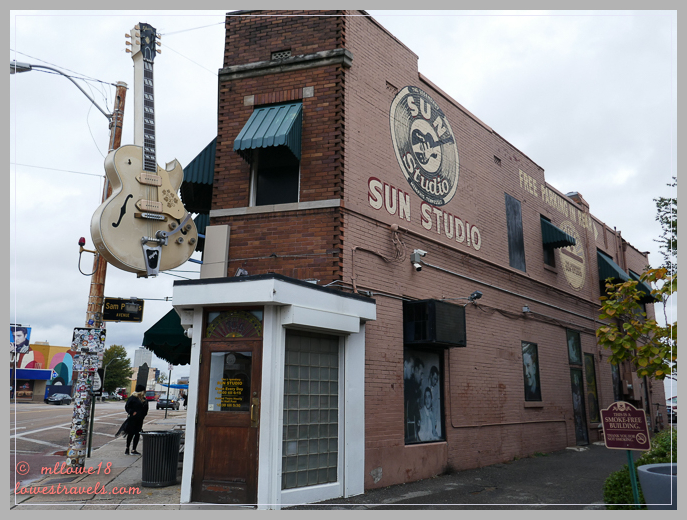 Neither of us was interested in touring Graceland, so we did a “drive by” on that one:

Graceland is back there somewhere

We did drive around the downtown area and along the Mississippi river: 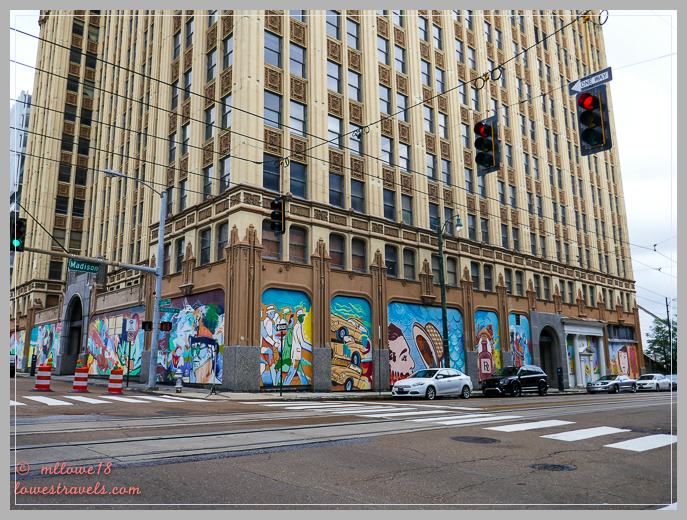 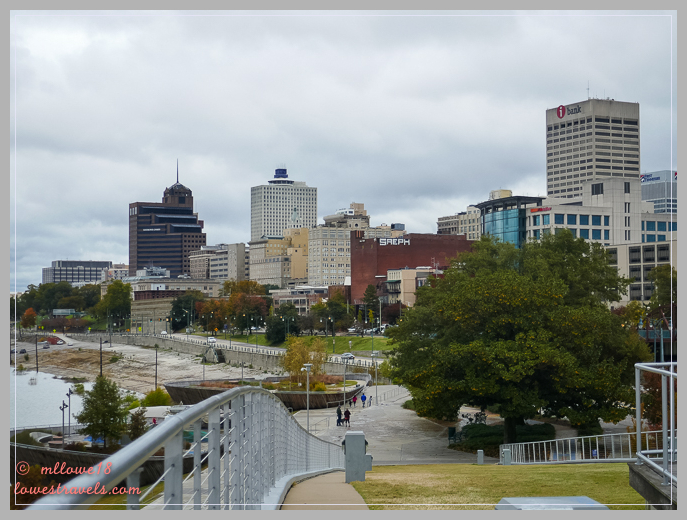 The city skyline – sorry Memphis, we had higher expectations

We cut short our stay at West Memphis after hearing that a severe storm with tornadoes was heading our way.  We forged ahead to Huntsville, AL, knowing that the rains would hammer us there as well.  As night fell we had our slides in and our emergency bag ready to grab on the way to the tornado shelter, if needed.  I think at this point Steve was wondering why the heck he wanted to come out east one more time! 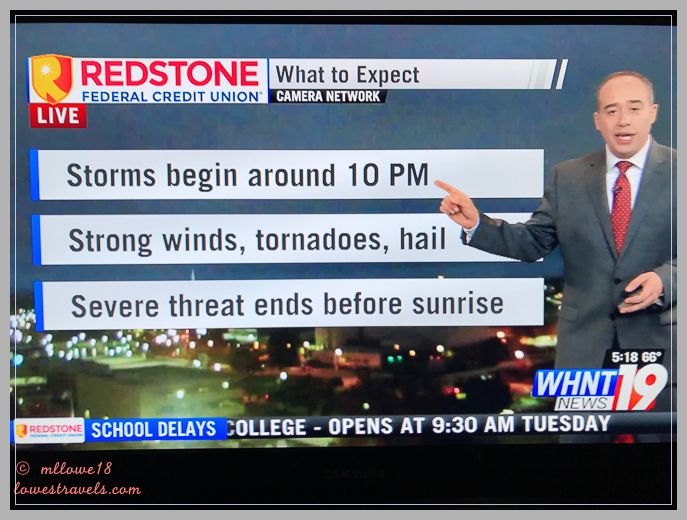 The evening weather report, it was a stressful night

We breathed a sigh of relief when blue skies appeared the following morning after little more than moderate rain had passed through Huntsville.

When we reserved our stops for these segment months ago, Steve was excited to discover that the U.S. Space and Rocket Center was right next door to the RV park.  He enjoyed a day to himself and contributed the following story: 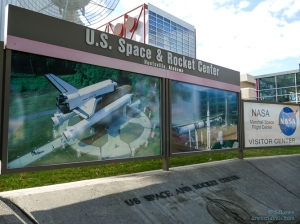 I spent several hours visiting the U.S. Space and Rocket Center, enjoying the displays that detailed, among many other things, the International Space Station and shuttle programs.  There was an additional bus tour (additional charge) of the Marshall Space Flight Center (MSFC) that I couldn’t work into my schedule, but the museum was excellent and I was able to complete my visit just as the school buses started rolling in.

The first stop was a gallery that displayed dozens of patented space-age products invented in the U.S. since the 1960’s.  I continued on to the Army weapons display, the Alien Worlds and Androids exhibition and then through the International Space Station mock-up.  Finally, I went outside to view and take pictures of the displays they maintain there.

I’d love to have this on the nightstand next to my bed!

I heard screaming kids approaching just as I was taking my last pictures of the outside exhibits – perfect timing!

This jet was modified for shuttle landing practice 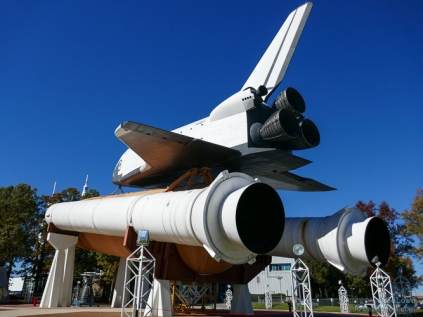 Like most museums, how long it takes to complete your tour depends on how deeply you get into the material.  It took me about 2.5 hours, and I was taking my time.  This is a large and well-done museum, and I’d recommend it to anyone coming to the Huntsville area.  ~Steve

The storms were right behind us again, so we cut short our stay here and continued on to Marietta, GA.  The weather ahead was supposedly better, but traffic on I-40 wasn’t: 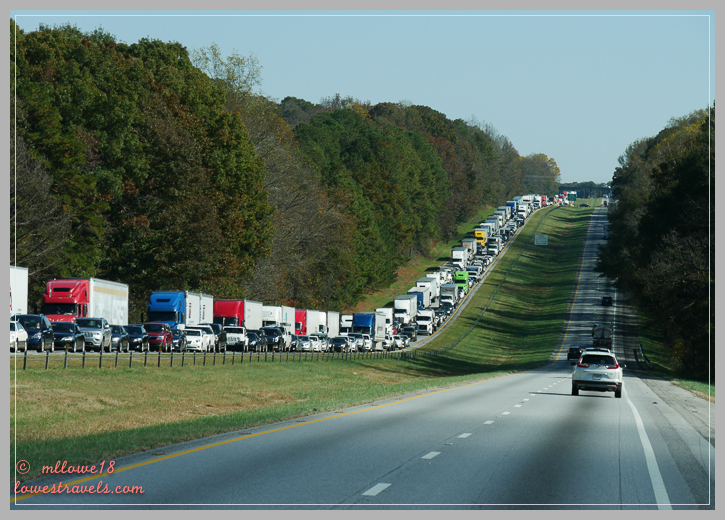 A 7-mile long mess due to an accident – we were actually measuring the length of the backups!

Just as we settled in at Atlanta-Marietta RV Resort Park, the clouds opened up once again.  We noticed this guy with a site for his motorhome and another for his equally long trailer, and we wondered about his situation:

If he can get out of here we can too!

On this stop we decided to do what we usually do when the weather is bad – cook up a storm of our own!

Come on over for some lumpia! 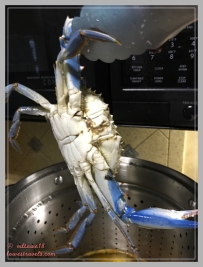 Blue crabs for me!

Steve made a smoked salmon quiche

We continued on to Greenville, SC, to revisit a campground we previously enjoyed in this area.  Ivy Acres RV Park was our home base in 2013 as we checked out the city of Greenville, but our goal this time was to meet up with Rocky and Marsha whom we’d met while traveling the Rocky Mountaineer Train ride in 2016.

A grainy photo of Rocky, Steve and Marsha, but thank you for welcoming us into your beautiful home!

The last few weeks of our travels have brought amounts of rain down on Betsy like we’ve never seen.  Steve discovered that the black tank solar vent fan on the roof was leaking around its base and needed replacement.  He found a way to keep the rain out while we waited for the new vent to arrive:

Temporary fix until the weather improves

He also fixed a problem with our Brake Buddy system for the car, and he’s working on an issue with the water heater as weather permits.  What would I do without my handyman? 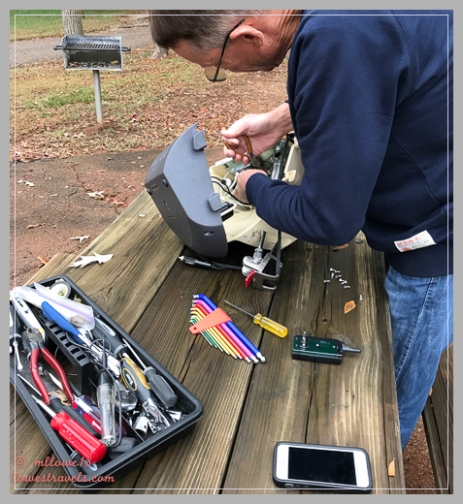 Working on the Brake Buddy 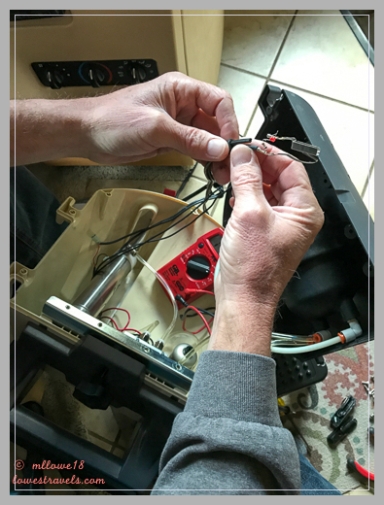 Found an open wire in the 12V plug 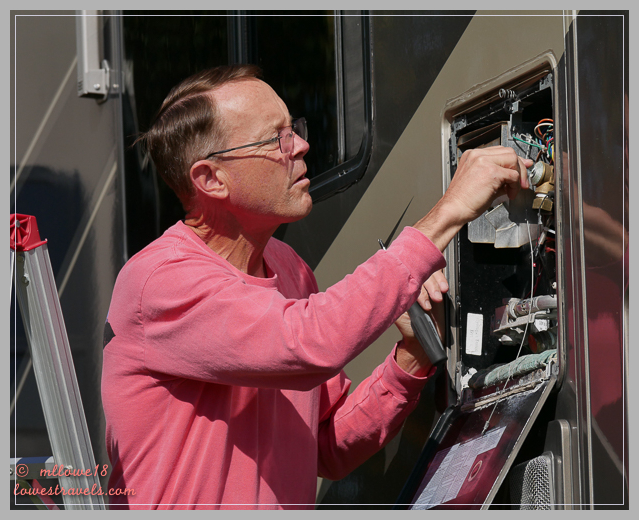 Trying to figure out a water heater thermostat problem

We made it to Gaffney, SC on Nov. 14th for Betsy’s scheduled maintenance at the Freightliner Oasis shop.  At this point, it really seemed like we were dragging the storms along with us! 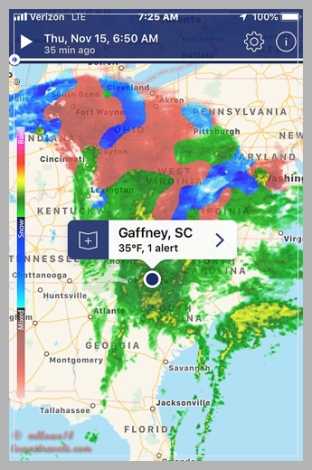 We were awakened by water dripping on our heads, as the tremendous rains had made their way through our slide seal.  I was up early to help soak up water in our overhead cabinets.  We turned Betsy over to the mechanics for the day and were glad to get out of there for a few hours of fun.

The incredible rain caused chassis errors on our VMS display as we started the engine – a good place for that to happen! 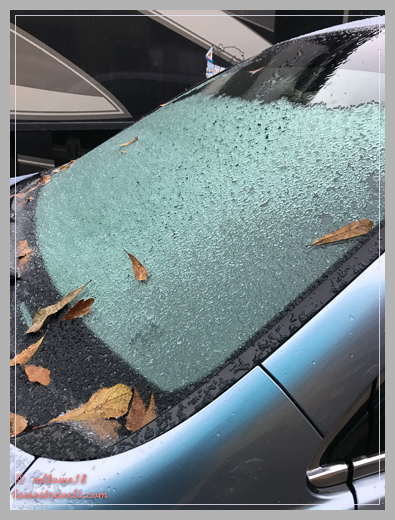 Ice on the car windshield and Betsy’s slide toppers – HELP!

We entertained ourselves by watching “Bohemian Rhapsody” at a theatre, and I became an instant fan of Queen and Ramil Malek, who played Freddie Mercury in the movie.  Steve has been a Queen fan for decades and has all of their music, which I’ve been enjoying ever since!

The day we left Gaffney under blue skies – yay!

With Betsy’s maintenance completed, we continued our storm-dodging and moved on to visit good friends in North Carolina…

Categories: Alabama, Georgia, South Carolina, Tennessee, Where we have been